Accessibility links
A Black Cosmetic Company Sells, Or Sells Out? : Code Switch Carol's Daughter was started to sell products for black women who wear their hair natural. But ever since L'Oréal bought the brand, folks are wondering if it can maintain the loyalty of its customers. 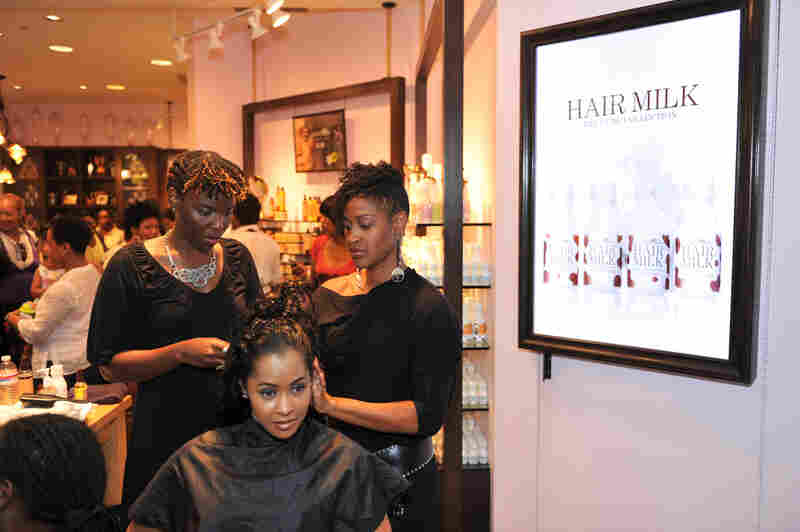 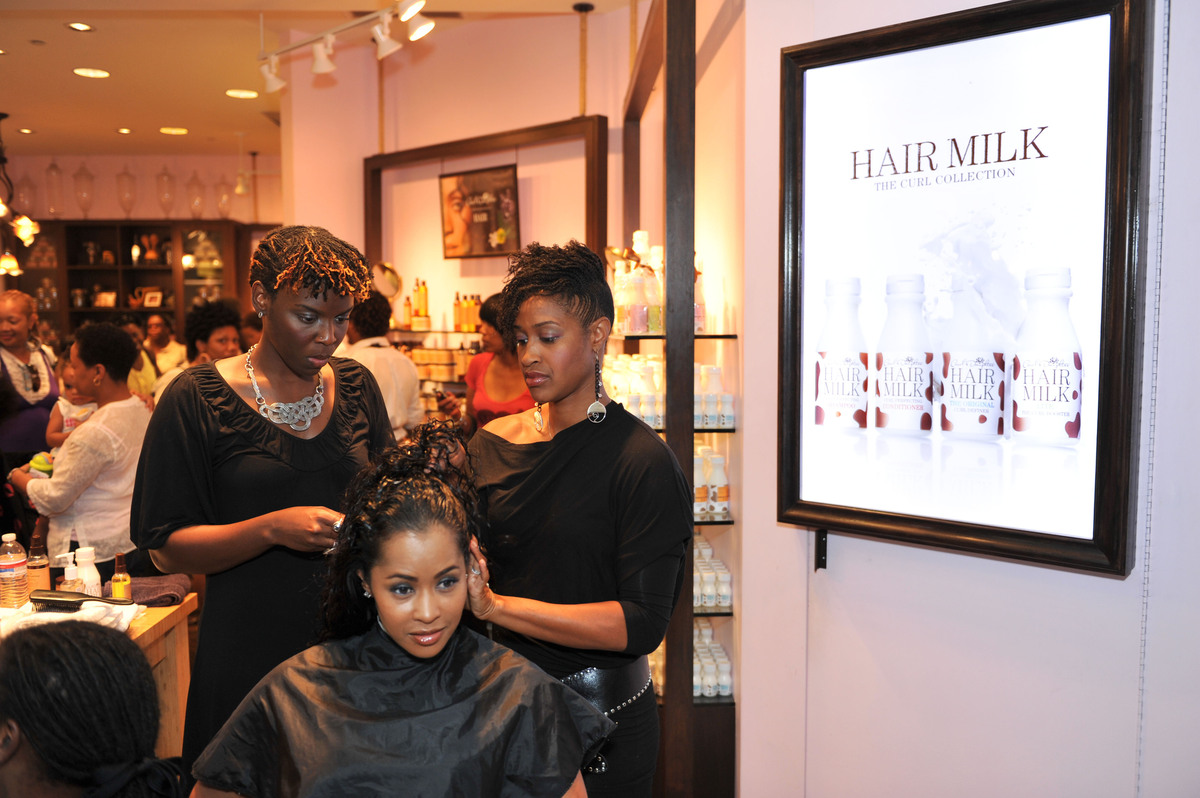 Real Housewives of Atlanta star Lisa Wu Hartwell gets a hair treatment at a "Curl Party" hosted by Carol's Daughter and theYBF.com in 2010.

Cosmetics giant L'Oréal purchased Carol's Daughter, a beauty company that sells natural hair and skin products for black women, earlier this week. It may seem like an unlikely chapter in the story of a business that began in a Brooklyn kitchen.

That story began in 1993, when Lisa Price began blending body butters, oils and natural fragrances in her Brooklyn home. At her mother's urging, Price brought the goods to craft fairs and began to sell them. Those products sold well and did even better when she added hair care for black women who, like her, wore their hair in its natural, unstraightened state.

Two decades later, that kitchen-born brand has a devoted following among African-American women. Carol's Daughter items now sit on shelves at Target, Sephora and Ulta and are sometimes sold on the Home Shopping Network. At one point, Price even expanded to seven brick-and-mortar boutiques, where customers could get advice and demonstrations on how to use the products. Carol's Daughter earned an estimated $27 million in sales last year and claims celebrity fans including Jada Pinkett Smith, Gabrielle Union and Mary J. Blige.

A Beloved Brand, A Troubled Business

Somewhere between 2010 and 2011, Carol's Daughter began to struggle. Sales were down in the boutiques, and a passel of competitors also began to flourish by servicing the burgeoning natural hair care market. According to BusinessWeek, Price eventually sold to Pegasus Capital Advisors, although she remained the face of the company.

Still, store sales faltered. In May, five of the seven boutiques were closed and Carol's Daughter Stores LLC filed for Chapter 11 bankruptcy protection. Fans worried that their favorite products would disappear.

Then on Monday, company founder Lisa Price posted a video that quickly got passed around on Facebook.

In it, she explained that Carol's Daughter would be "joining the L'Oréal family." Price said the French cosmetics giant would "take what I built and solidify its place in history and beauty and I don't have to wonder if in 20 years from now, 30 years, from now, if there'll still be a Carol's Daughter brand." In a statement, a L'Oréal spokesperson said that "Lisa Price will remain in her role, serving as the creative visionary and spokesperson for the brand and will continue to lead product development."

Even if the Carol's Daughter brand moves forward, some wonder if the customers will follow, since it's no longer a black-owned business. Noliwe Rooks, a professor at Cornell University specializing in black women and image and gender issues, says the intense interest in the future of Carol's Daughter comes from customers' deep emotional attachment to the brand — and that the attachment begins with Price.

"Her love for that community, and love for black women and economic possibility for black people is as much a part of her creation story and her narrative as whatever her products would do for your hair," Rooks says. 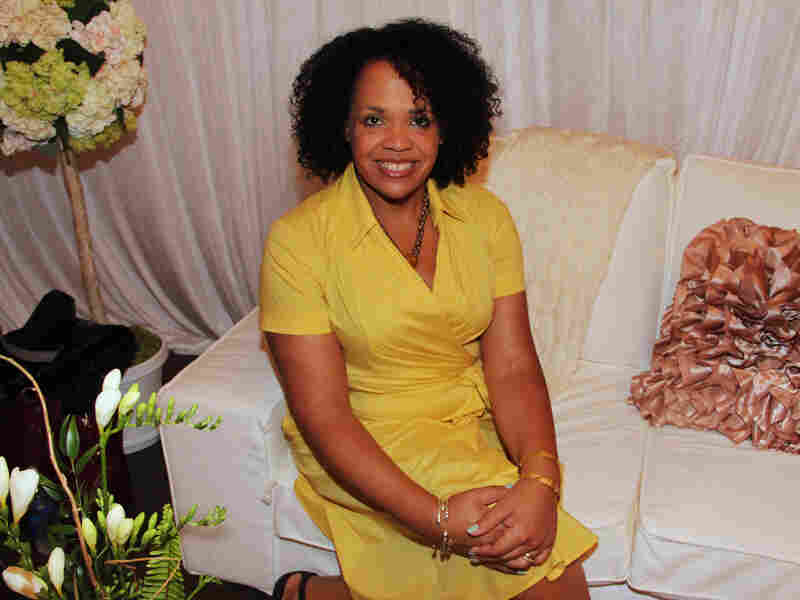 Lisa Price, the founder of Carol's Daughter, at its pop-up store in New Orleans in 2011. Johnny Nunez/Getty Images hide caption

Lisa Price, the founder of Carol's Daughter, at its pop-up store in New Orleans in 2011.

Rooks points out that Price founded Carol's Daughter at a time when many black women were starting to wear their hair in its natural state, and many had difficulty finding products that would work for their hair's unique texture.

A blogger who goes by the name Honey Bii noted one Carol's Daughter ad campaign that featured several racially ambiguous women — as opposed to the African-American ones who helped to launch the brand.

"I'm not fair-complected," Honey Bii says, "and by no means do I feel that they [the ads] have to have this Afro-centric feel to it. But I feel like she sold us out." The thinking was that, in reaching for a broader demographic, Price was overlooking her original base.

"She really was, specifically, aiming at black women, who have a variety of hair textures," Rooks says. "But I'm not sure that's a niche that's as lucrative today." Hence the multicultural approach.

Ken Smikle, president of Chicago-based Target Market News, which monitors black consumer patterns, says the sale of Carol's Daughter to L'Oréal makes sense: "Cosmetics is tough," he notes, "and it would be more logical for a company already engaged in the market to want to make a purchase and extend their ability to serve black customers."

L'Oréal has a mixed track record with that.

Missteps In The African-American Market

On one hand, in 1998, L'Oréal bought the "SoftSheen" line from Carson Products, a black-owned hair care firm, and it has maintained the line without a problem. On the other, in 2008, it featured Beyonce Knowles in its Feria hair color ads — and endured a storm of outrage on black social media sites. Bloggers were convinced the company had lightened Knowles' skin to appeal to a more mainstream aesthetic. L'Oréal emphatically denied that, saying in a statement that "it is categorically untrue that L'Oréal Paris altered Ms. Knowles' features or skin tone." But suspicion continued.

Smikle says L'Oréal will have to master its learning curve as it reaches out to new customers, but — to paraphrase the company's motto — it'll be worth it. There are women of color here and beyond the U.S. who are just waiting for cosmetics made with them in mind.

And probably a good deal for Lisa Price, who, L'Oréal says, will still have a role in the company. Now the brand that she started in her kitchen will reach women around the world, and her products will be on shelves for a long time to come.