Accessibility links
Navajo Nation Changes Language Law : Code Switch Chris Deschene's campaign to become president of the Navajo Nation could get a boost after a requirement for candidates to be fluent in the Navajo language is altered. 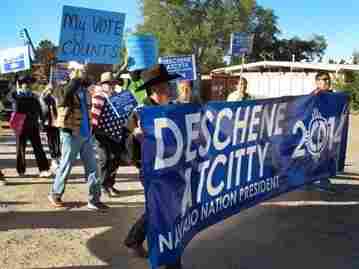 Supporters of Navajo presidential candidate Chris Deschene gather outside an administrative court in Window Rock, Ariz. Questions about his fluency in the Navajo language have dogged his campaign. Felicia Fonseca/AP hide caption

In the space of a few months, the quest for one candidate to become the next Navajo Nation president has become intertwined with the changing culture of Indian Country. It has turned into what could be described as a political thriller with a distinctly Navajo hue.

Here's the set up: Navajo law states that Navajo presidents must speak the language to hold office. Forty-three year-old Chris Deschene received enough votes in the first round of presidential voting to make it to the final Nation's ballot. But later, a series of complaints and lawsuits accused him of not being fluent in Navajo.

Efforts to have Deschene disqualified culminated on Thursday in the Navajo Nation Supreme Court. By a 2-to-1 vote, the court ordered that Deschene be removed from contention, and that the election be postponed in order to reprint the ballots with the name of another candidate.

However, just after midnight Thursday, the Navajo Nation Council voted to adjust the language requirement for presidential candidates. "The bill keeps the current Navajo language fluency requirements intact," reports the Farmington Daily Times. "But adds that the language proficiency 'shall be' determined by the people voting in favor of the candidate."

In other words, the bill acknowledges the importance of the Navajo language for presidential candidates, but also recognizes the right of voters to decide who best represents them. It wasn't an easy sell, though. The bill passed narrowly – 11 to 10.

The close decisions in both the judicial and legislative branches underscore the divide in the Navajo Nation over how important language and identity are to tribal members. Many citizens have been concerned that electing a leader without language fluency would undermine Navajo identity, while others – especially a growing number who are not fluent in Navajo themselves – say that they finally feel represented in the Nation's political sphere. In 2007, researchers estimated that around 30 percent of Navajo first graders spoke the language fluently, compared to around 90 percent in 1968.

Deschene says he's prepared to represent the Navajo Nation. "As an element of our culture, things like our land, things like our traditions and customs, including our language, are priority," he says. "I've conveyed to our people that those unique characteristics, identifiers, elements of our culture, make us separate, unique and special to the rest of the world. They are the foundation of sovereignty."

There are over 300,000 Navajo citizens spread across the Navajo Nation – an area just slightly smaller than the country of Panama – as well as across the United States and the world. Navajo efforts to stop language loss have ranged from partnerships with companies like Rosetta Stone to translating films like Star Wars into Navajo.

"I'm Navajo and because of that I have the right to participate in my government, especially when I see that my government is in trouble," said Deschene. "So if that message carries throughout Indian Country, and if people are qualified and willing and able, they should be afforded the same opportunities to help their own people."