The Struggle Of Being Asian-American For Halloween

The Struggle Of Being Asian-American For Halloween

The other night, at a large outdoor Halloween-themed party, I saw a young white girl, probably about 3 or 4, dressed up in a long, purple kimono. I felt an involuntary uneasiness. I wanted to ask her parents who she was supposed to be — maybe it's a character in some cartoon I don't know about, I thought — but I didn't want to embarrass anyone. Which is to say, Problematic Dress-up Season is in full swing.

Sure, there is no shortage of guides to not being racist for Halloween. Only problem: One must be possessed of a desire not to be racist in order to seek them out. Officials at the University of Minnesota sent an email to students reminding them to "please keep in mind that certain Halloween costumes inappropriately perpetuate racial, cultural, and gender stereotypes. Although it may not be the intent, these costumes, and choosing to wear them, can depict identities in ways that are offensive or hurtful to others."

But what happens when the costume might be offensive to yourself?

As I was trying to figure out what to be for Halloween this year, I had a recollection of my mom using eyebrow pencil to draw a Fu Manchu-style mustache on my face as part of a costume when I was a kid. (It's probably worth noting here that I was adopted from Korea, and that my mom is white.) When I asked my parents about this, they said they didn't remember that Halloween costume in particular, but they did remember once dressing up my sister, who's also a Korean adoptee, "in a coolie hat," which is how my mom phrased it.

"What was she supposed to be?" I asked.

"An Asian girl," my mom replied.

I don't know what I was expecting her to say, but her answer was so matter-of-fact, it caught me off guard. I may have laughed a little. After all, my sister was, literally, an Asian girl. And I recognize the impulse. Part of choosing a costume is how well you will embody the character, and race is part of what makes a costume legible. (If I showed up at your Halloween party in an impeccable midcentury suit, with a Scotch in hand and a look of vacant smugness on my face, I doubt you'd guess I was Don Draper.) 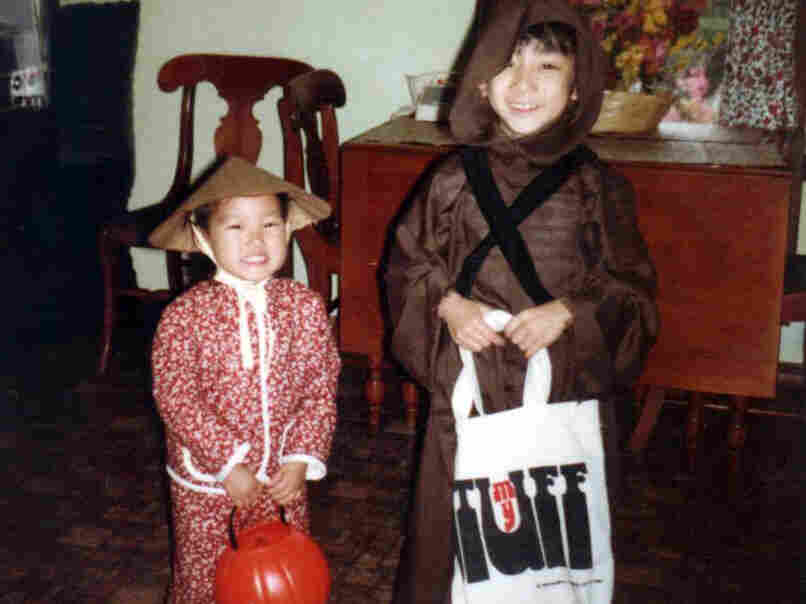 The author (right) and his sister, one awkward Halloween day. Courtesy of Steve Haruch hide caption 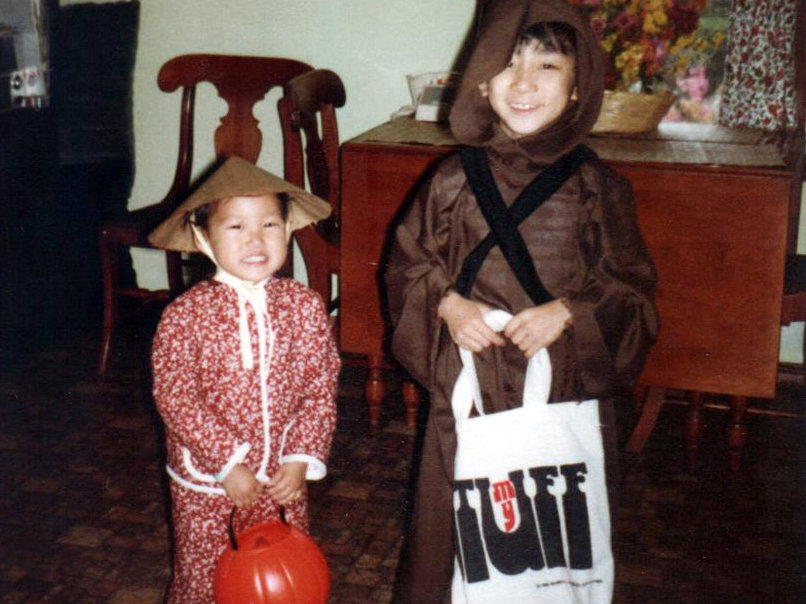 The author (right) and his sister, one awkward Halloween day.

This recollection reminded me how, in my teens and early 20s, I made a conscious effort to carry over my Asian-American identity reclamation project onto my Halloween costume choices. That did not prove easy.

One year, I borrowed a Yankees hat from a friend and carried a backpack to every Halloween party. Almost no one recognized this as a costume, much less who it was supposed to be: Short Round, Indiana Jones' sidekick in the The Temple of Doom. (Note to costume purists: I didn't realize at the time that he actually wore an old-school New York Giants hat, but I wouldn't have been able to find one anyway.)

If someone asked for a hint, I'd recite what lines of his I could remember from the movie — "Hey, lady, call him Dr. Jones!" — which of course required putting on an accent. Talk about problematic. Halloween is particularly tricky (so to speak) in that a costume's success depends so much on what resonates within the culture, and when so much of what resonates derives from racist attitudes, the holiday becomes a crucible of identity struggles.

One year I wore all black clothing, a black mask and black leather gloves. Most people recognized this as a costume — one person who was probably quite drunk guessed Zorro — but no one guessed who it was supposed to be: Kato, the Green Hornet's sidekick and Bruce Lee's first American television role.

If you're sensing a theme of "Asian" and "sidekick," then you have stayed woke, as it were.

The larger issue in all this is that it was near impossible to choose a costume that was Asian-American, and just as hard to choose one that was Asian without perpetuating the kinds of stereotypes I spent the other 364 days a year trying to dispel.

The larger issue in all this is that it was near impossible to choose a costume that was Asian-American, and just as hard to choose one that was Asian without perpetuating the kinds of stereotypes I spent the other 364 days a year trying to dispel.

I love Bruce Lee, obviously, but I would never wear a gi for Halloween. (If I wore his yellow-and-black jumpsuit from The Game of Death, folks might wonder why I thought I could pull off Uma Thurman.) And I'd never wear a traditional Korean hanbok, either — because while "person from another culture" is not a good costume idea, neither is "person from my own culture." Both treat ethnic identity as a plaything.

One year I considered going as Ah Jong, Chow Yun-fat's character in The Killer, but that mostly involved wearing a suit and holding two guns, which something told me would go over about as well as previous attempts.

The options only got more obscure from there — I'm the guy from that movie Reservoir Dogs ripped off! — and I eventually gave up on the project altogether.

Then again, maybe this year I'll go as Ekelarc Yong.