Accessibility links
Navajo Nation Presidential Candidate Suspends Campaign : Code Switch After the latest in a flurry of decisions on whether his lack of fluency in the Navajo language disqualifies him from the presidential ballot, Chris Deschene's candidacy is now in limbo.

Deschene, 43, made it onto the Nations ballot after receiving 19 percent of the vote — second to Dr. Joe Shirley Jr., a former Navajo president. But Navajo law requires that all presidential candidates speak the Navajo language fluently, and Deschene quickly came under fire when he was accused of not passing that test.

In a 2-to-1 vote, the Navajo Nation Supreme Court ordered Deschene off the ballot last week. Then the Navajo Nation Council voted to change the language requirement in an 11-to-10 vote, retroactively, so that Deschene could continue running. On Tuesday, that legislation was vetoed by current Navajo Nation President Ben Shelly. 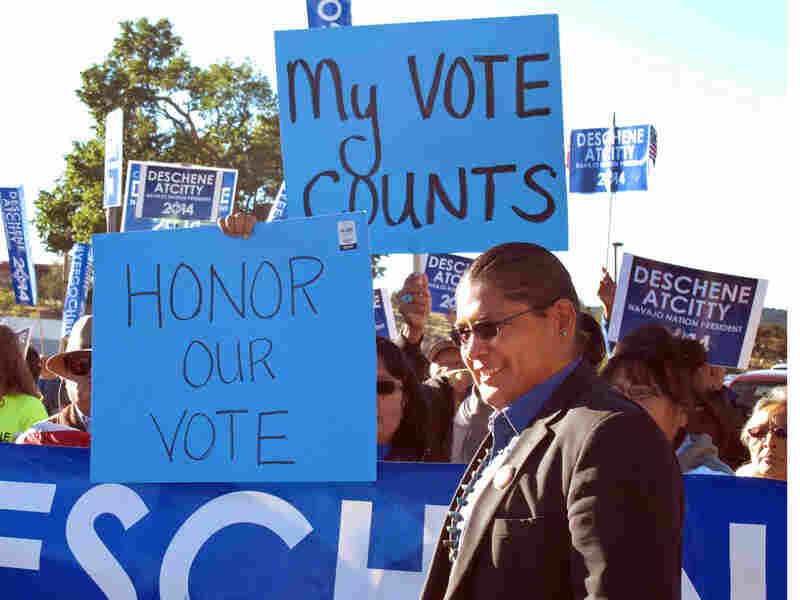 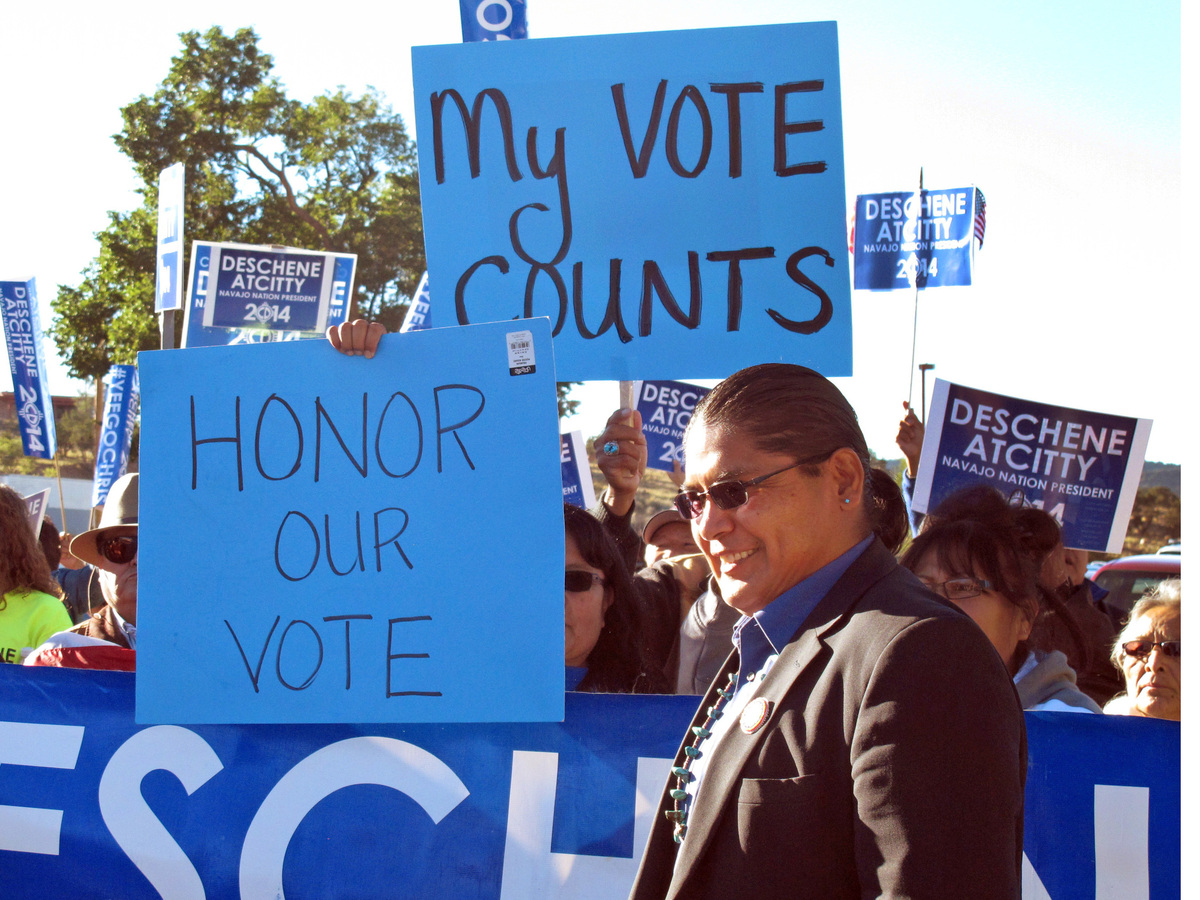 "In a two-page veto message to the Navajo Nation Council, Shelly wrote that the bill — which the council passed last week — was 'only intended to help one candidate who has been disqualified, ' " reported the Farmington Daily Times.

The veto leaves Deschene with few options and a standing order from the Supreme Court to the Navajo Nation Election Board to reprint ballots without Deschene's name.

"The message Chris is sending to voters is, 'Continue to vote,' but what this looks like in the end I think is anyone's best guess," said Stacy Pearson, a spokeswoman for Deschene's campaign. "He has not conceded but he's not actively campaigning. So the campaign is in limbo."

However, the campaign is still alive. On Tuesday, the Navajo Nation Election Board commissioner, Wallace Charley, announced that Deschene's name would not be removed from the ballot.

"The Navajo are citizens of the United States; there is a constitution that gives the principle that people have a right to vote, and their votes cannot be denied," Charley told reporters at KOB 4 in Albuquerque. "So based on that, the Navajo Board of Elections Supervisors will not back off on this principle. Whether that means going to jail — fine. We'll go to jail and see what comes out of this."

Beyond the divide over language fluency and authenticity embodied by this election, the next problem is how to alter an election once it's already underway. Early voters have shown up in such force that some parts of the reservation reported running out of ballots, and other races — such as Navajo Nation school board and council positions — are on the same ballot.

Besides how to deal with votes already cast for Navajo positions, state and federal ballots have also been filled out by early voters, and at present, there is no clear plan for ensuring election integrity should new ballots be printed or old ballots discarded.

Native American voters were the last group in the United States to get the right to vote, and for the Navajo Nation, that didn't happen until the 1960s. As an ethnic group, Native Americans have incredibly low voter turnout. One effect of the ongoing controversy is that there could be a chilling effect on people who traveled long distances to cast their ballots and may now lose their vote to ongoing lawsuits and government disputes.

"It's what we would consider a constitutional crisis," said Pearson. "It continues to be a showdown between the legislative branch and the judicial branch."

With less than a week left, there's also the possibility that Deschene could win the election. There is no precedent for how to handle a situation where a disqualified candidate receives a majority vote.

As for Shirley, Deschene's opponent, a spokesman for his campaign issued a short statement on the matter:

"We look forward to bringing the Nation back together and working hard to get prepared for the general election. Regardless of who our opponent may be, the Shirley-Benally campaign is focused on winning this election."