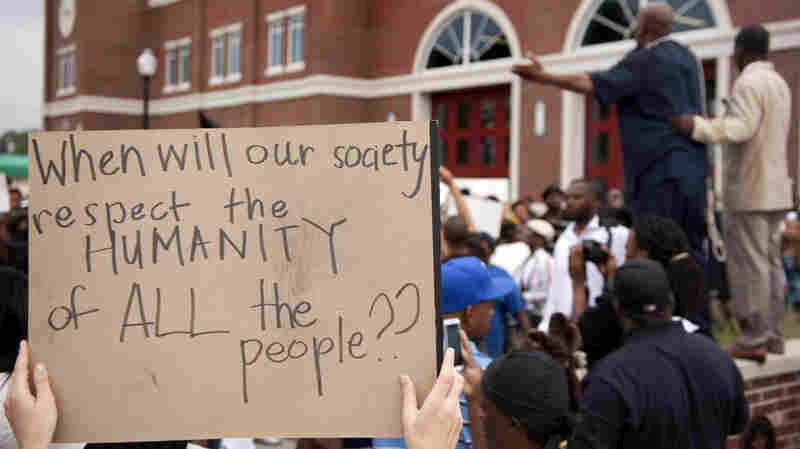 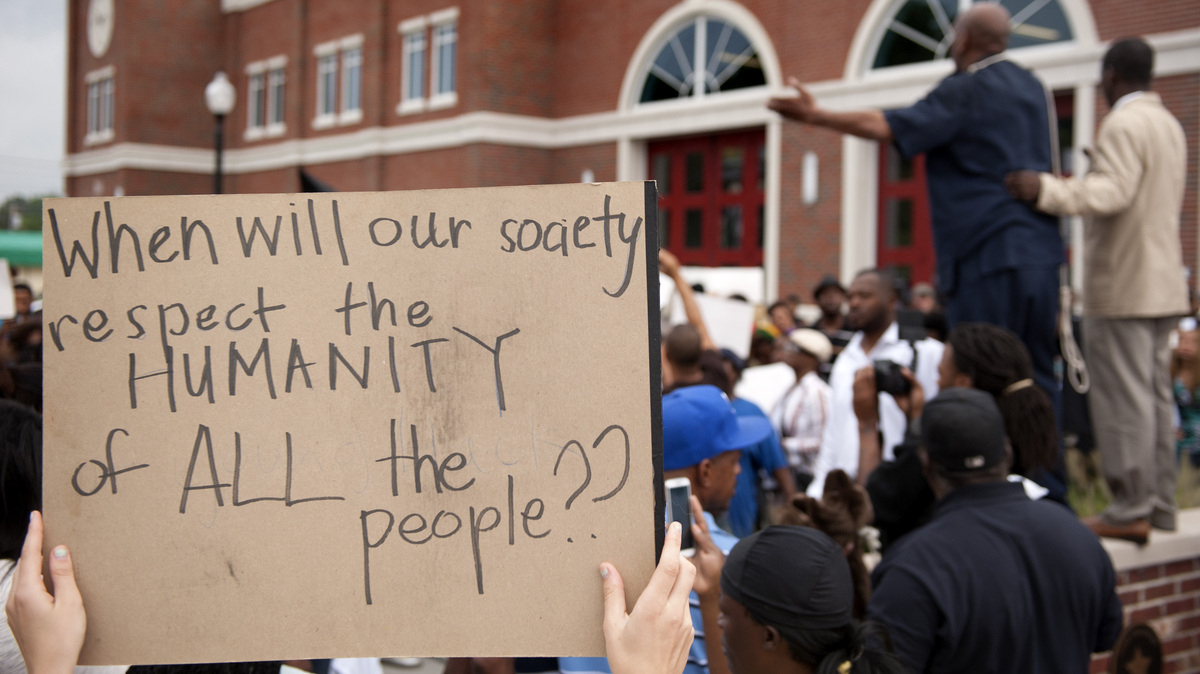 A crowd rallies to protest the shooting of Michael Brown in Ferguson, Mo.

After Michael Brown was shot dead in August, his mother, Leslie McSpadden, said, "My son was sweet. He didn't mean any harm to anybody." He was, she said, "a gentle giant."

But when police officer Darren Wilson fired the shot that ended Brown's life, he saw things differently. "I felt like a five-year-old holding onto Hulk Hogan," he said in his testimony to the grand jury. "That's just how big he felt and how small I felt." Wilson said "the only way" he could describe Brown's "intense aggressive face" was that it looked like "a demon." He feared for his life.

Many observers, such as Slate's Jamelle Bouie and Vox's Lauren Williams, pointed out that Wilson's testimony has historical echoes of the "black brute" caricatures that portrayed black men as savage, destructive criminals.

After the Civil War, many white writers argued that the institution of slavery was what kept the supposed savagery of black men in check and also justified the punishments that they met. In the Reconstruction-era novel Red Rock, for example, Thomas Nelson Page wrote of a black politician — a "repulsive creature," Moses — who tried to rape a white woman: "He gave a snarl of rage and sprang at her like a wild beast."

But these depictions haven't just been banished to old books. On Twitter, the hashtag #Chimpout started trending this week as tweeps used it to describe those protesting the grand jury's decision. Again, drawing upon animal imagery, Urban Dictionary defines the term as "used to describe the bad behavior of black people, especially when they behave like animals."

Contemporary studies suggest that language like this, as well as the language in Wilson's testimony, has deeper psychological roots.

Take, for example, research published in the Journal of Personality and Social Psychology earlier this year. The report, titled "The Essence of Innocence: Consequences of Dehumanizing Black Children," found that African-American boys as young as 10 were significantly less likely to be viewed as children than were their white peers. Philip Atiba Goff, an assistant professor of social psychology at UCLA and one of the lead authors of the report, spoke to NPR's Michel Martin when it came out. "In black boys' lives, what we know from developmental psychology is there are more situations that demand that they be adults than there are in the average white boys' lives," he said. "And the problem is we rarely see our black children with the basic human privilege of getting to act like children."

As an example, Goff mentioned the death of Trayvon Martin after he was shot by George Zimmerman. "All of a sudden a 17-year-old boy was portrayed as a manly thug. He was seen sometimes by people to be older than he actually was," Goff said. " 'He was a boy in a man's body' was something I heard multiple times. And you don't hear that when it's white children in the same context."

Adam Waytz, a psychologist and assistant professor at Northwestern University's Kellogg School of Management, has looked into why this happens. He points out psychological studies where "people demonstrate a racial bias whereby they believe black people experience less pain than white people."

Waytz also points to literature and pop culture that depict African-Americans as stronger than whites. "Spike Lee's famous terming of — and I quote — the mystical 'magical Negro' as a stock character comes up in a lot of films," he says. "And even Melissa Harris Perry's done some academic work on the myth of the strong black woman, which is ... this popular trope in American culture of black women being superhumanly strong and being able to keep the family together and all of those things."

Based on all this, Waytz recently co-authored a study, "A Superhumanization Bias in Whites' Perceptions of Blacks." It examined whether people were quicker to process words related to supernatural concepts like "wizard" and "magic" compared with words related to humanity like "person" or "citizen" when looking at black or white faces.

"Essentially what you see is that white participants in our studies were quicker to process superhuman words when these words were preceded by a black face," he says. Participants were then asked which face — black or white — would be more capable of possessing superhuman strengths, superhuman speed, the ability to withstand heat or to suppress hunger and thirst in a more-than-human fashion. More than half the time, the black face was assumed to possess superhuman capacities.

Participants who made these assumptions were also more likely to think the black people shown were less sensitive to pain. And Waytz says this is not a good thing.

"We know dehumanization often emerges as people treating others as subhuman, like vermin in the case of the Holocaust, [or] as apelike in depictions of African-Americans in U.S. history, and that denies people humanity," he says. "What we're saying is that superhumanization is another way of denying humanity and 'othering' African-Americans by saying that they exist sort of outside the human realm."

Waytz also says he recognized much of this language in Wilson's testimony. "Superhuman strength, superhuman speed, this idea of him as a demon; this depiction of Brown as Hulk Hogan versus a child," he points out. "All of this was exactly consistent with the types of capacities that we were asking about in our studies." And Waytz says there are reasons why he might draw upon these depictions. "The other side of the superhumanization coin is you believe that black people are less sensitive to pain, and perhaps [Wilson] is suggesting that because of the superhuman nature of Brown in this moment, which he perceived, more excessive force was required."

So could that be right? And do these perceptions usually affect police officers? "Of course," says Tracie Keesee, a 25-year police veteran and co-founder of the Center for Policing Equity and the director of community outreach. "We've always talked about those social stereotypes that go along with aggressiveness," she says. "How do you describe what aggressiveness looks like on a black male versus a white male?"

Stereotypes, implicit biases and media images, Keesee says, factor into the decisions officers make. "Your mind is trying to make sense of those things in a very rapid and quick fashion. And so what we always like to train, and fashion our training around: Are you reacting to the correct thing?"

That is on the mind of police chiefs across the country, she says. "How do we not only identify that we are engaging in this type of behavior, but how do we fix it?"

Amruta Trivedi contributed to this report.