Accessibility links
A Brief History Of Racial Protest In Sports : Code Switch On Sunday, players from the St. Louis Rams ran onto the field with their arms raised in the "hands up, don't shoot" pose that's been used in protests of the shooting death of Michael Brown.

A Brief History Of Racial Protest In Sports

A Brief History Of Racial Protest In Sports 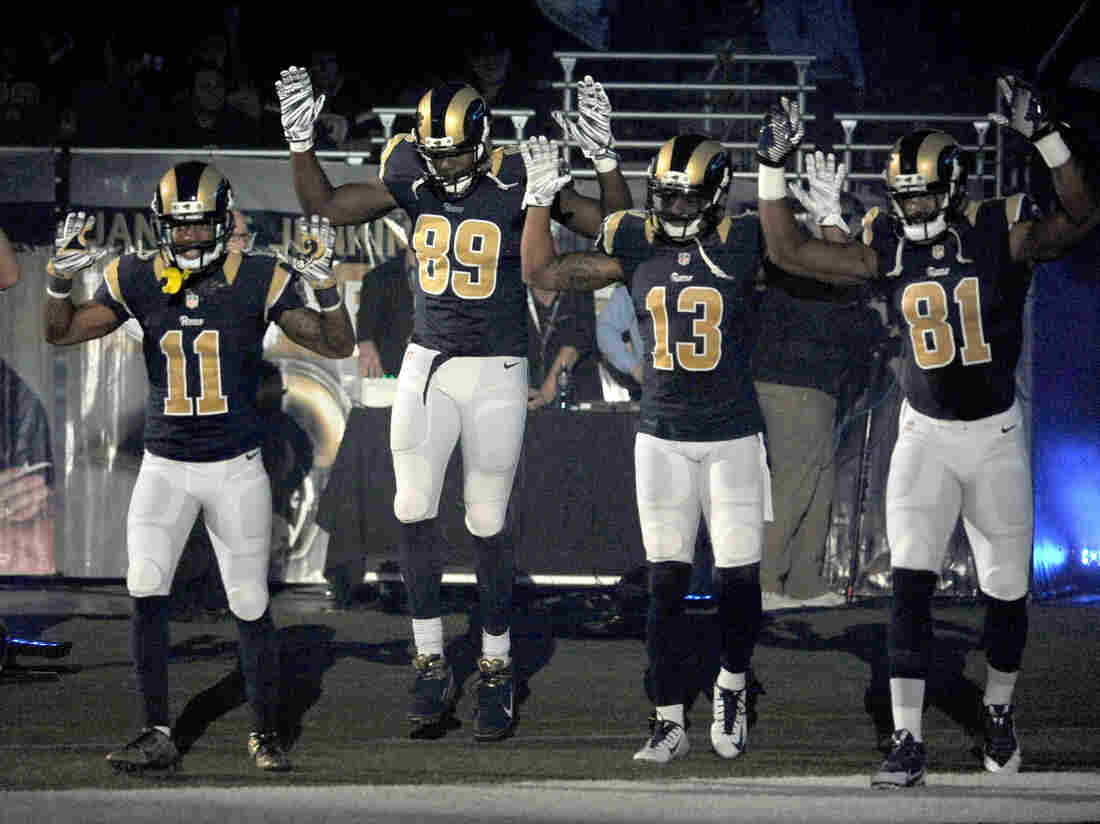 Members of the St. Louis Rams raise their arms in a "hands up, don't shoot" pose as they walk onto the field before an NFL football game against the Oakland Raiders. L.G. Patterson/AP hide caption 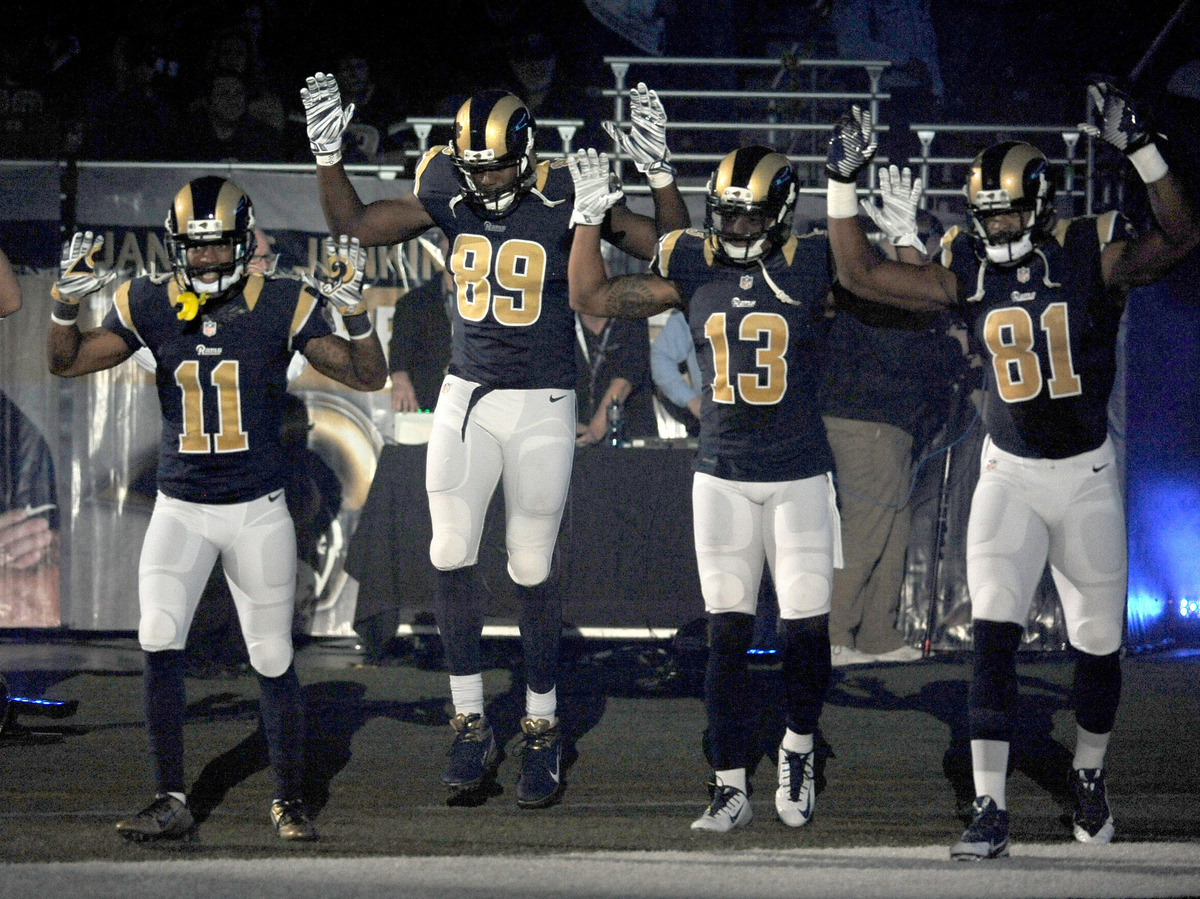 Members of the St. Louis Rams raise their arms in a "hands up, don't shoot" pose as they walk onto the field before an NFL football game against the Oakland Raiders.

"No matter what happened on that day, no matter how the whole situation went down, there has to be a change."

On Sunday, five St. Louis Rams players jogged onto the field with their arms raised by their heads, a stream of fog behind them: hands up, don't shoot.

The players — Tavon Austin, Kenny Britt, Jared Cook, Chris Givens and Stedman Bailey — were invoking the gesture that's been widely used in protesting the shooting death of 18-year-old Michael Brown by police officer Darren Wilson. This followed the announcement that a grand jury would not indict Wilson in Brown's death, and the release of a hefty batch of evidence shown to the jury by St. Louis prosecutor Robert McCullough.

"No matter what happened on that day, no matter how the whole situation went down, there has to be a change," said Cook, a tight end for the Rams.

And Britt, the Rams' wide receiver, took it a step further, winding tape around his arms and marking them up with the phrases "Mike Brown" and "My Kids Matter":

Their actions drew criticism: The St. Louis Police Officer's Association demanded that the NFL discipline the players, stating that "the gesture has become synonymous with assertions that Michael Brown was innocent of any wrongdoing." On Monday, the NFL said there'd be no punishment, and there's been controversy about whether or not the Rams apologized. (The Rams' executive vice president said that he did not.)

Of all the different types of celebrities, it seems that athletes are less visible as advocates for political change. 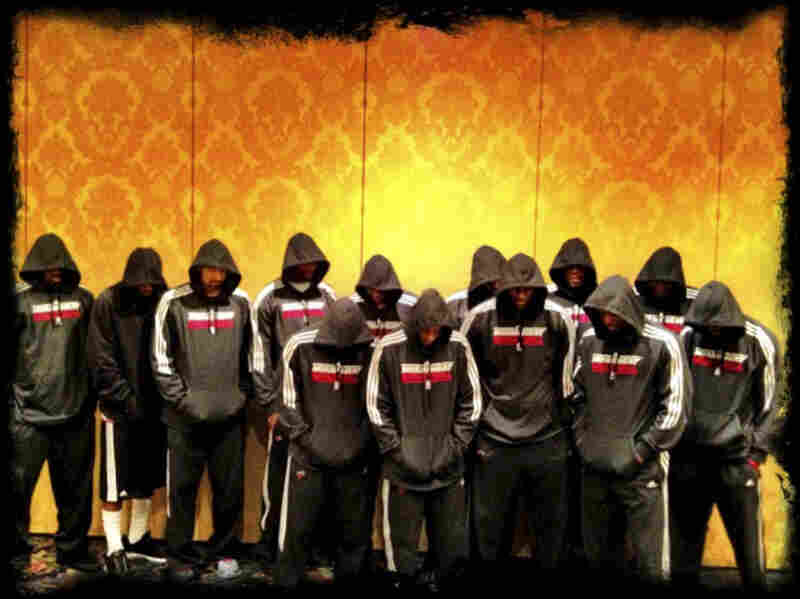 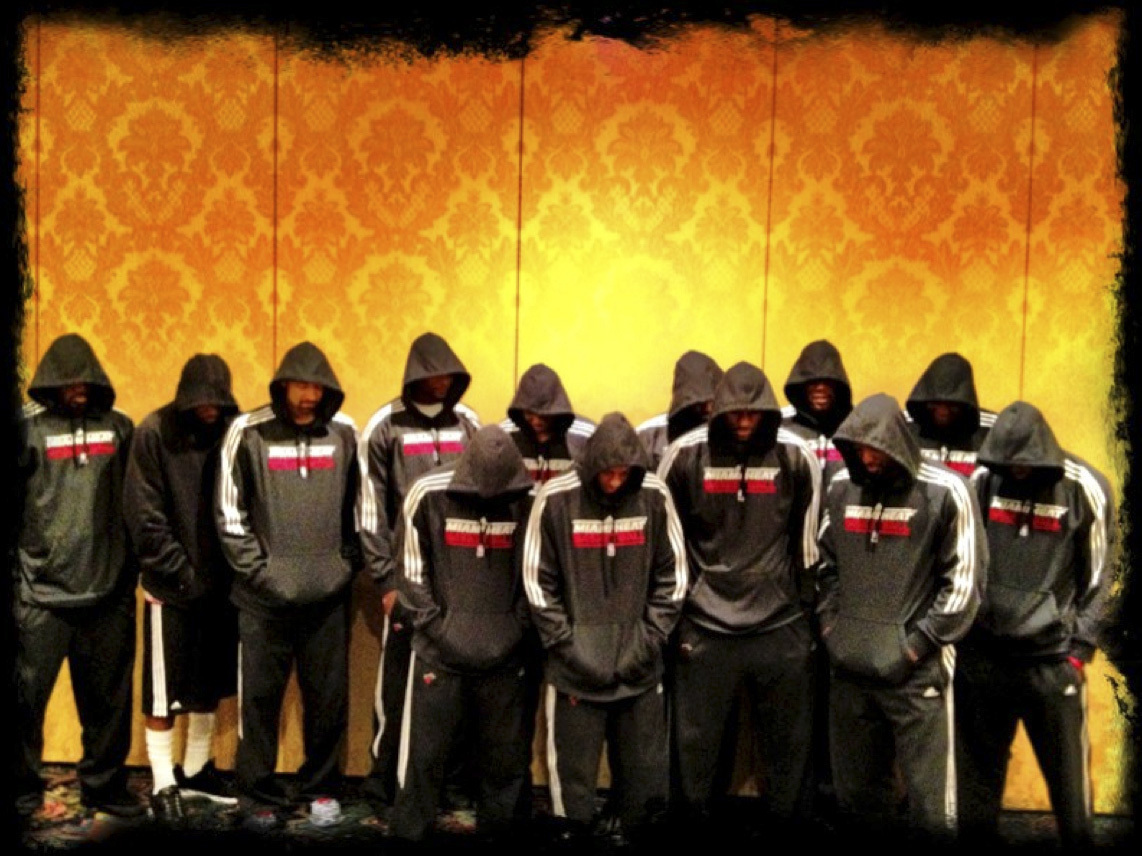 Back in 1992, Michael Jordan was asked to throw his support behind Harvey Gantt, a black Democrat in North Carolina who was running for the U.S. Senate. Jordan declined and reportedly told a friend that Republicans buy sneakers too.

And there's a recent history of athletes taking their own political stances: Starting in 2010, members of the Phoenix Suns wore jerseys that said "LOS SUNS" — a nod to their support for immigrants in Arizona as the state passed a strict immigration policy that critics say encouraged racial profiling. The Spurs also had their own versions of the jersey. In 2012, LeBron James, Dwayne Wade and other NBA players from different teams donned hoodies, referencing Trayvon Martin's death and the controversy surrounding it. (James weighed in about the Ferguson decision last week.) Also notable was Muhammad Ali's own brand of activism. In the 1960s, he declined to be drafted to fight in the Vietnam War, and changed his name when he converted to Islam.

In 1968, two American athletes at the Mexico City Olympic games stepped onto the winners podium, shoe-less but decked out in black socks and gloves. Tommie Smith and John Carlos — gold and bronze medalists in the 200 meter dash — raised their fists above their heads, silently protesting the discrimination against blacks in the U.S. (Many refer to their gesture as the Black Power salute; however, in his biography, Smith stated it was a "human rights salute." It's worth noting that this all happened against the backdrop of a huge litany of things: the assassinations of civil rights activist Medgar Evers, President John F. Kennedy and Martin Luther King, Jr.; the Birmingham church bombing; and passages of the Civil Rights Act and the Voting Rights Act.) 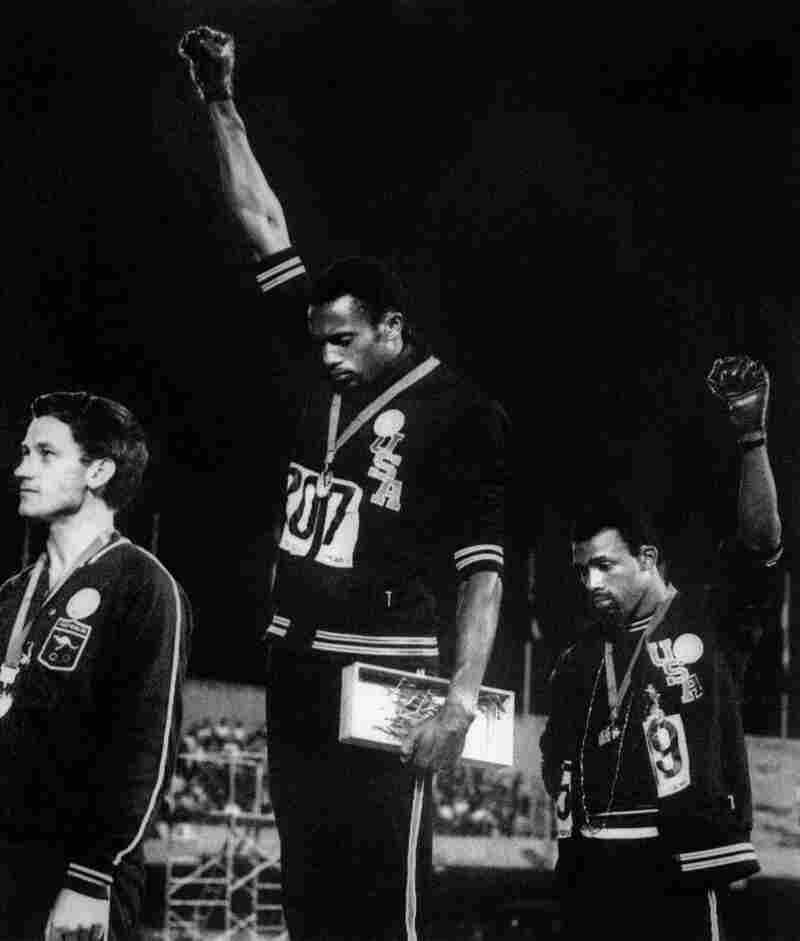 U.S. athletes Tommie Smith and John Carlos raise their gloved fists at the Mexico City Olympics in 1968 to express their opposition to racism in the U.S. AFP/Getty Images hide caption 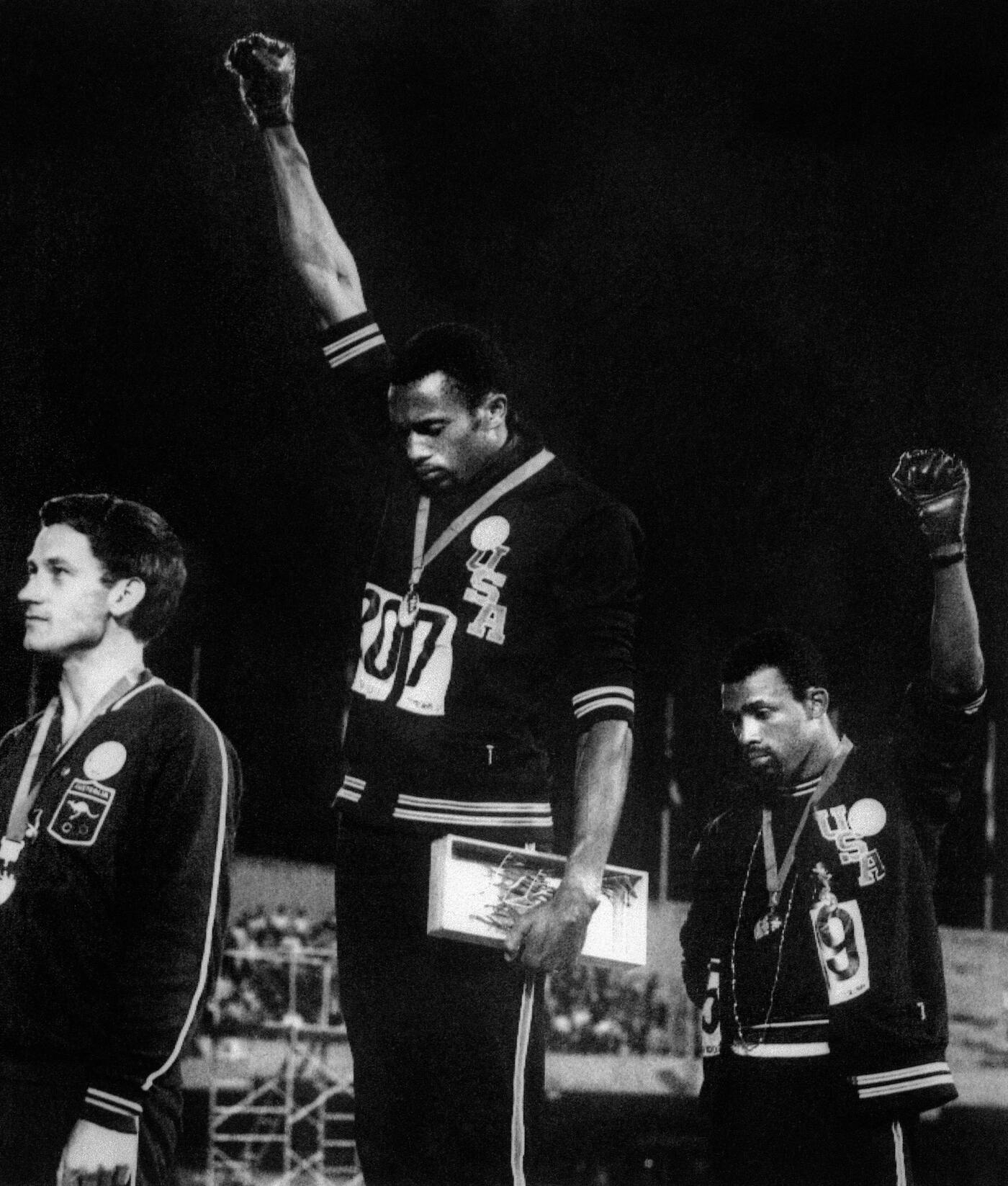 U.S. athletes Tommie Smith and John Carlos raise their gloved fists at the Mexico City Olympics in 1968 to express their opposition to racism in the U.S.

"If I win I am an American, not a black American. But if I did something bad then they would say, a Negro. We are black and we are proud of being black," Smith said at the time. The pair was encouraged to protest silently by sociologist Harry Edwards, who was a professor at San Jose State University at the time and had created the Olympic Project For Human Rights in 1967.

"We felt it was imperative that athletes take up their part of the struggle through a dignified, nonviolent protest," Edwards, who is now a professor emeritus at the University of California, Berkeley, told me on the phone.

Smith and Carlos were expelled from the games by the International Olympic Committee. They were booed and criticized by the public, and were met with disdain: In one of its issues, Time magazine replaced the Olympic slogan "Faster, Higher, Stronger," with the words "Angrier, Nastier, Uglier." (This wasn't the first time athletes had taken individual stands at or against Olympic games. In 1936, when Nazi Germany hosted the games, some people wanted to boycott them altogether; others thought that winning would make a big enough point.)

When the University of Wyoming was slated to play Brigham Young University in 1969, 14 of Wyoming's black football players wanted to protest the game: the church of Latter Day Saints had a rule that forbade African-Americans from entering the priesthood. (In 1978, the Mormon Church changed its rule.) When the players approached their coach, Lloyd Eaton, seeking permission to wear black armbands during the game, he refused. And when they later asked him to reconsider, he banned them from the team. These teammates became known as the "Black 14."

"It was my time to contribute to the social revolution," Mel Hamilton, one of the players, told the AP in 2009. Hamilton's son would later grow up to be a part of the Mormon church. "I said (to my son Malik), 'I did this because of people like you that want to go into the church, and I want to make sure you have a fair shot.' "

The Black 14 — and their armbands — turned into symbols in that era.

(The University of Wyoming joins a long list of other higher-ed institutions that stepped into thorny territory with their sports teams and race. Syracuse University in 1968 and University of Washington in 1969 were among those teams.)

It seems that our expectations of athletes — and their political participation — has evolved over time.

"Remember what Charles Barkley was saying?" said Jeffrey Sammons, a New York University professor whose work examines race, history and sports. Barkley, who played for the Philadelphia 76ers and the Phoenix Suns was generally seen as apolitical. He famously said, "I am not a role model. Just because I dunk a basketball doesn't mean I should raise your kids." (Barkley, by the way, is a TV commentator. He recently came out in support of the Ferguson grand jury.)

"Athletes were certainly the most visible symbols of black success, and we can look to Jack Johnson, and Joe Lewis, and Jackie Robinson and see that," Sammons, who wrote the book Beyond The Ring: The Role Of Boxing In American Society, said. "But as blacks have broken through in other areas, in the political arena, the economic arena, I think that there's been a shift in the belief that athletes don't have much to offer, that they're not equipped to really take on the roles that they once did — and that other blacks should take the lead in this regard."

For Edwards, these demonstrations reflect a new sense of what this generation of athletes cares about.

Sports recapitulates the most serious and deeply-rooted cultural social values in every society.

"Sports recapitulates the most serious and deeply-rooted cultural social values in every society," Edwards said.

In recent weeks and months, we've seen the fervor and passions related to these issues — and we've seen some athletes, in their own ways, echoing those sentiments.

"These are not tragedies. Mike Brown was not a tragedy. It was part of a pattern. Since Michael Brown was shot, there have been 14 young unarmed African-American men shot across this country," Edwards said. "And this is what these athletes are saying, and I'm so proud of them I don't know what to do."

"I fully expect there will be other 'hands up, don't shoot,' demonstrations in the NFL, in the NBA, in collegiate sports. It is time," Edwards said. "And it seems this generation of athletes has found the issue that they're going to stand up and protest around."