Accessibility links
Flitting Between Solutions For Police Violence : Code Switch A quick look at the post-Ferguson headlines shows how different ideas meant to reduce violent police encounters have come into vogue before being discarded just as quickly. 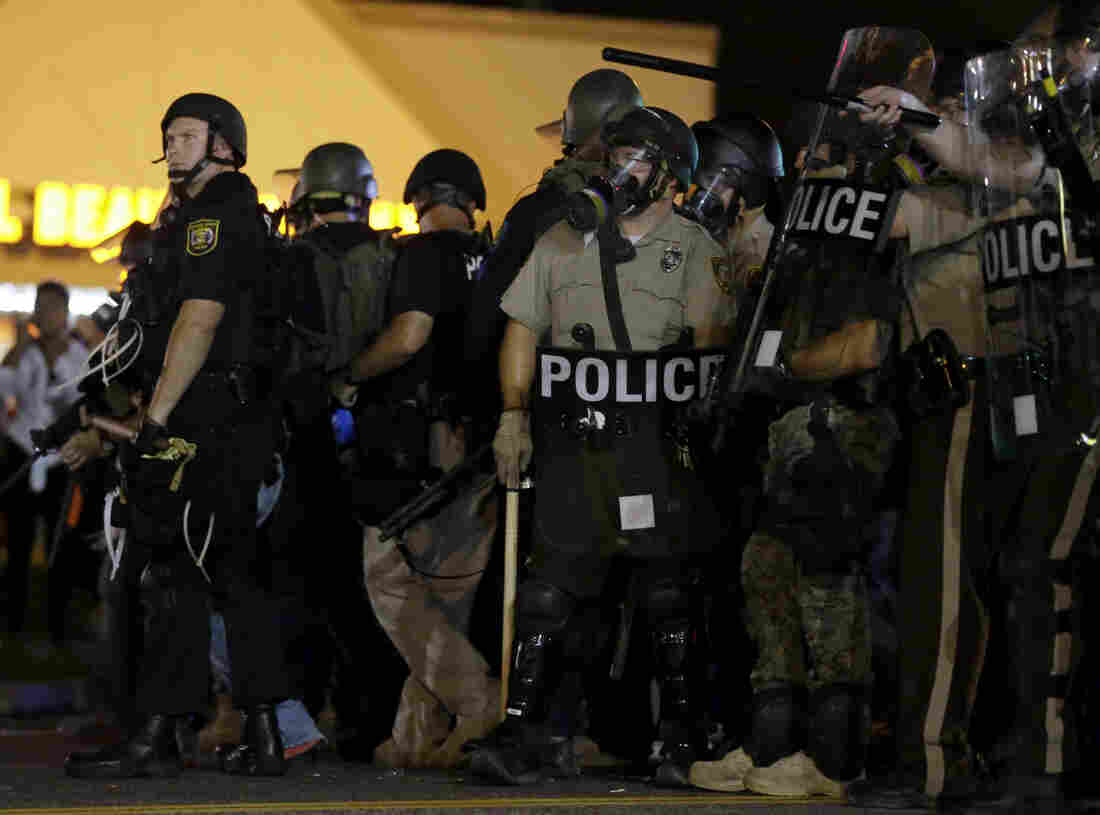 Since the unrest in Ferguson this summer, there have been calls to diversify police forces. But the results of studies on whether police forces that are more diverse can reduce tensions are decidedly mixed. Jeff Roberson/AP hide caption 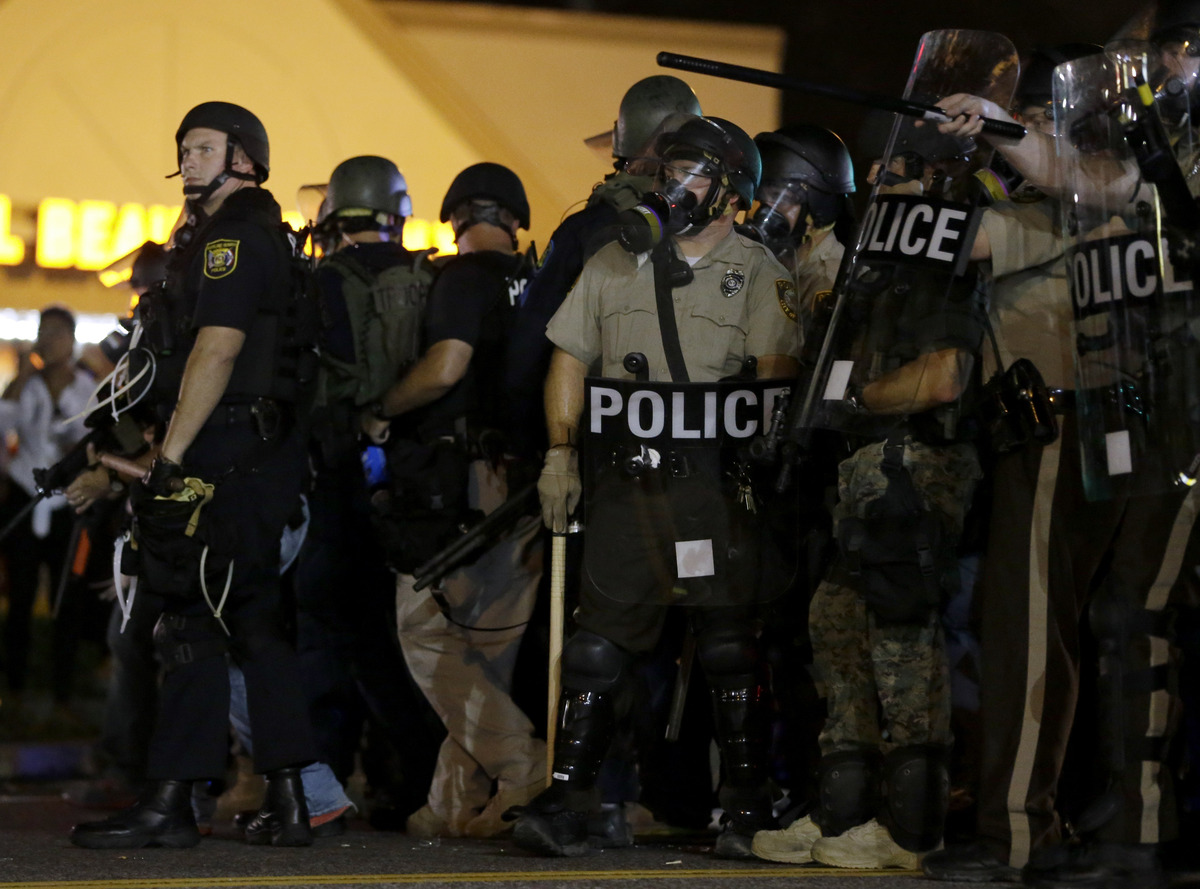 Since the unrest in Ferguson this summer, there have been calls to diversify police forces. But the results of studies on whether police forces that are more diverse can reduce tensions are decidedly mixed.

Take a look at the flier for this weekend's planned "Justice For All March" in Washington, D.C., which is centered on several recent police-involved killings of unarmed black men. There's no specific policy demand on that flier — perhaps because the problem doesn't lend itself to a singular fix.

A look at the post-Ferguson headlines shows how different ideas to fix this problem have caught on, even before we know how well those ideas might work.

One of the responses to the killings has been a widespread call for police departments to diversify. The rationale tends to sound like this: A police department relies on credibility and trust, and if you don't reflect your community, the chances of that are pretty slim.

During the height of the protests in Ferguson over the summer, there was one stat that kept being bandied about, and it was meant to explain the gaping distrust between the city's black residents and its police. Fifty of the 53 officers in the St. Louis suburb were white, while more than two-thirds of Ferguson's residents were black.

And Ferguson is hardly an outlier. The New York Times crunched data from a federal survey of police departments across the country and found that in nearly 400 departments — most like Ferguson, with fewer than 100 officers — the share of white officers was 50 percentage points higher than the share of white residents in the places they policed.

But we don't actually know if diversity has an ameliorative effect on police-community relations or shootings. Indeed, as Lauren Kirchner of Pacific Standard magazine wrote back in August, the data on whether browner police departments reduce complaints or use of force are almost pointedly mixed.

"In an analysis of 186 'officer-involved shootings' in Riverside County, California, researchers writing for the journal Criminal Justice and Behavior found that white officers were more likely to shoot than non-white officers, but a previous study of police shootings in Chicago for the Journal of Criminal Law and Criminology found that black officers were more likely to shoot than white officers. The studies were of different places and different times, so it's impossible to generalize from them."

Like Kirchner, I also talked to Tracy Keesee from the Center for Policing Equity, a think tank that, among other things, is trying to create a national database for police use of force. (As we've written about before, we don't know a whole lot about how often police use force in their encounters with the public. There's no comprehensive federal database. So Keesee and her colleagues aren't the only ones trying to track these types of incidents.)

Keesee is kind of a unicorn — a black woman, a big-city police captain with 25 years on the job and a doctorate in intercultural communication. She says that to the extent that diversity can be achieved in a police force, effectiveness comes with some pretty big caveats. A key one, she said: Black officers need to be in leadership positions to make decisions.

"If you're a patrol officer on the street — and we all start in patrol — you don't have any say on any policies or how they're enforced," Keesee said. "If your command staff says that your priorities are this, then you do this."

That means that officers on patrol have little say in how to deal with petty infractions like those in the Garner incident — if it's a departmental priority that he be fined or arrested for that offense, and an officer's performance is judged on how well he or she fines or arrests for those things, there's little wiggle room for any officer.

And officers, regardless of race, become acculturated to the ethos and systems in their departments, Keesee says. Of course, acculturation is necessary to move up in the ranks of any organization.

It can also be difficult for police to recruit black officers, as my colleague Martin Kaste has reported. "One of the biggest things you'll hear is that we want folks from the area who understand the community," Keesee told me. "Look at the dynamics that are going on [in Ferguson] now. How eager would people be to join?"

Black officers aren't necessarily viewed with less suspicion when they're doing the job or less contempt when an encounter becomes calamitous. As my Code Switch partner Kat Chow noted over the summer, there was civil unrest in a town right next door to Ferguson in the 1960s after a black police officer shot and killed an unarmed black teenager. And the Sean Bell shooting in New York City set off sustained, widespread protests; at least one of the officers involved in that incident was black. The distrust isn't simply about the race of the officers with whom residents come into contact.

Another much-touted fix has been to outfit police officers with body cameras. Departments all over the country, including in Ferguson, said they would require their police to wear them while on duty. President Obama recently announced a $75 million plan aimed at buying body cameras for law enforcement agencies nationwide.

The logic behind the push for putting cameras on police officers is often pegged to one study in Rialto, Calif., that saw striking results: Once several dozen of its officers began wearing cameras, complaints against the police dropped 88 percent from the previous year.

But Rialto is a small city and the study boasted a small sample size. It's also very possible that — like the conflicting findings about police forces — there could be other dynamics at play specific to Rialto that wouldn't translate to a different city.

There's also the not-so-small issue of police cooperation. Fusion's Connie Fossi-Garcia and Dan Lieberman looked at how five cities used police body cameras and found that this was why it was so hard to draw any conclusions about whether body cameras reduced police use of force:

"One key problem: officers control the record button. They decide when to turn on and off the cameras and have little to fear when violating department policies about recording, Fusion's analysis found. In many use of force incidents, camera footage doesn't exist, is only partially available, or can't be found. And when body cameras are turned on, the footage usually favors the officer's account, according to police, law enforcement experts and public defenders we spoke with."

Keesee, the police captain, told me about another practical shortcoming of body camera technology: A camera is only effective so long as a police encounter is consensual. The video would be of little use after an altercation like the one in the Garner incident, in which the officer's forward-facing body camera would quickly be obscured or jostle too much to make sense of the footage.

Police diversity might be a laudable goal on its own terms. And there might be plenty of reasons that police encounters should be recorded. But those approaches are distinct from — and sometimes supplant — bigger, more difficult conversations about law enforcement policy and just what we're asking police officers to do.

In talking about what could have prevented another Garner incident we've jumped pretty quickly to "What if David Pantaleo were black or had been wearing a body camera?" But if we're looking at the whole equation of what drives use of force, fatal or otherwise, one of the biggest factors has to be the sheer amount of contact between black people and the police. The officers who confronted Garner in that fateful encounter were cracking down on the sale of loosies — an offense that was deemed enough of a departmental priority that potentially deadly force might be used to curtail it.