Accessibility links
Diversity In Space: Tracking The First Asian Pilot In The Star Wars Movies : Code Switch The Asian characters in the original Star Wars films are few, fleeting and often forgotten. But the manager of the "Holocron" database at Lucasfilm helps uncover their back stories.

"There's ... too many of them," a Y-wing pilot says as Imperial ships overwhelm the Rebel fleet in the climactic space battle in Return of the Jedi.

This scene is important because we've just learned that the Rebels have been lured to the forest moon Endor by the Emperor — it's a trap! It's also important for another reason: This is the first line spoken by an Asian character in the original Star Wars movies. 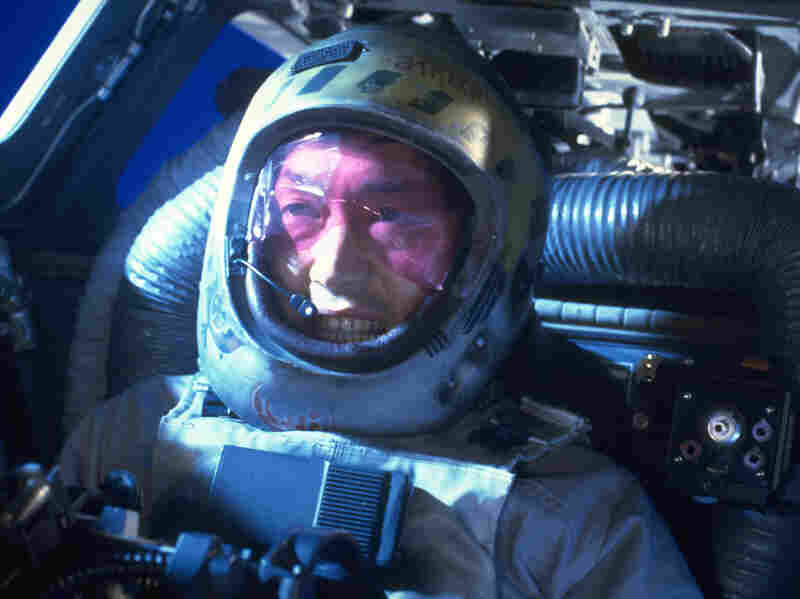 Lieutenant Telsij of Return of the Jedi is one of just a handful of Asian characters in the Star Wars film series. Lucasfilm hide caption 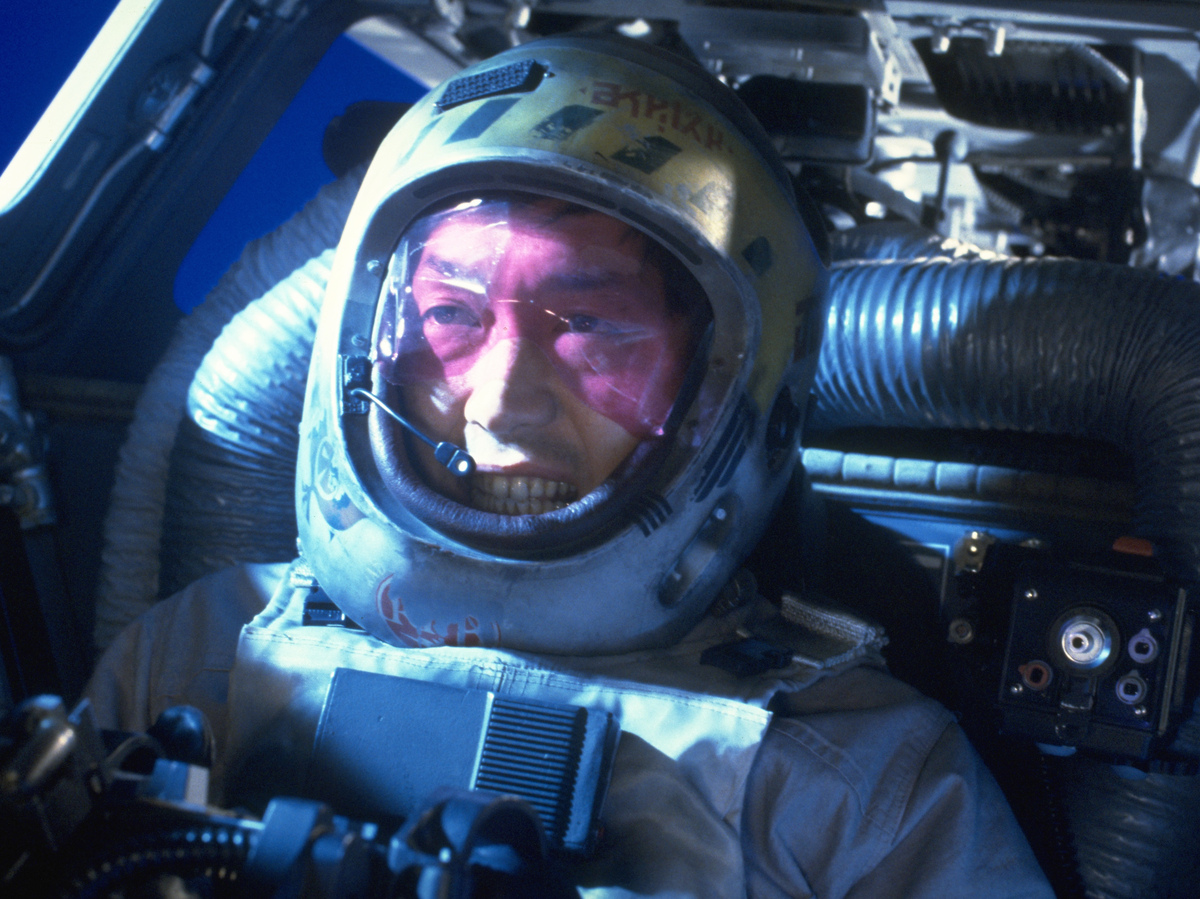 Lieutenant Telsij of Return of the Jedi is one of just a handful of Asian characters in the Star Wars film series.

Later comes the final line spoken by an Asian character in those films: "I'm hit!" Then, a shower of sparks, and the cockpit bursts into flame faster than you can say "Jek Porkins." Total time onscreen: approximately 4 seconds. (Brief, but enough to yield a Halloween costume idea, at least.)

So who is this Asian Rebel pilot? As it turns out, that's kind of complicated.

First off, the role is uncredited, and while there are assorted Rebel pilots listed in the cast, none fits the description. For Star Wars knowledge this obscure, one must consult Leland Chee of Lucasfilm.

"My title is manager of the Holocron," Chee explains, "and the Holocron is a database of all Star Wars facts."

Chee says the Holocron holds over 66,000 entries: "characters, planets, droids — everything from the movies, from what we now consider 'legends' material, which is all the books that came out before this year, comics, games, trading cards, stuff we've done online, stuff we've done for role-playing games, stuff for toys — that's what I'm tasked with compiling."

The Asian pilot we're looking for was made into a toy in 1999. Well, sort of.

"That figure is a mess," Chee says. "It's wrong on so many levels. They made him red, which is the color of the B-wing pilots. They gave him a Y-wing helmet, but they gave him the name of an A-wing pilot."

This is exactly the sort of mistake Chee and his comrades in the Lucasfilm Story Group are now responsible for preventing. Peering deeper into the Holocron — the FileMaker database is actually "not that complex," Chee says — he's able to search it while talking on the phone with a reporter. That yields a better answer: Lieutenant Telsij.

The name Lieutenant Telsij first appears in a card game set released by Decipher in the year 2000. Like many minor characters, Telsij didn't get his name until after the fact. In this case, about 17 years after the fact.

"A lot of that information, like naming of background characters, especially from the films, came from that Decipher collectible card game," Chee explains. "Most of their card sets were pre-Episode I, so it was mostly classic trilogy material, and they were naming every single background character. They were also pulling from the Star Wars Holiday Special as well, because they had image reference for that. But yeah, if someone wasn't named, they would name them."

The Lieutenant Telsij card even contains a bit of back story; he flew under the call sign Gray Two, and was "one of only four attackers who survived the raid on the Imperial Academy at Carida."

Incidentally, Chee says he tracks pronunciation in the Holocron, "but it's only as needed." In the case of Telsij, "I don't think we've ever used him in anything that required a pronunciation for his name," he says. But, he adds, "If someone asked me, I would say 'TEL-sidge.' "

So who played Telsij in the movie? Chee asked J.W. Rinzler, author of The Making of Star Wars: Return of the Jedi, to send him the call sheets for the Y-wing cockpit shots. Those include three names: Eiji Kusuhara, Timothy Sinclair and Erroll Shaker.

Kusuhara, who also appeared in Eyes Wide Shut, among other performances, died in 2010. But he's the most likely candidate. Hilary Westlake, a stage director who was a close friend and wrote Kusuhara's obituary for the Guardian, says Kusuhara never mentioned this role to her. But after viewing the clip, she says, "Albeit brief, I would say it is most certainly Eiji."

So that's that, right? No. "There are two different Y-wing pilots," Chee says, "each with their own unique helmet, possibly voiced by the same voice actor."

That second pilot — the one who cries out, "I'm hit!" — is Ekelarc Yong. His name comes from an action figure released by Hasbro. He has a bat on his helmet and flew under the call sign Gray Three.

"We didn't even know this character existed until we did that action figure," Chee says with a laugh. "I didn't know until recently that they were actually two different guys."

Maybe they weren't intended to be two different guys. Maybe the Ekelarc Yong character is the result of a continuity error.

"There's a lot of strange things that go on with those pilots," Chee says. By way of example, he adds: "One of the pilots in the film is actually a woman, but she's given a man's voice. A-wing pilots are supposed to look a certain way — they're the green ones; they've got a certain helmet — but then you go to the briefing room scene and some people are carrying the wrong helmets."

So it's at least conceivable that the same actor, possibly Kusuhara, could have accidentally donned a different helmet in subsequent takes. Watching the film, it's difficult to tell whether there are two different actors — the pilot is grimacing in the second clip, and the explosion begins almost immediately, obscuring his face. Neither Chee nor Rinzler was able to find the name of the voice actor who seemingly provides the voice for both. So we'll probably never know. But two helmets means two action figures, and that means two pilots.

Elsewhere in the Star Wars universe, there are more Asian characters than there might appear to be at first glance, though Telsij and Yong are the only ones who speak. Some have names, some don't.

"Some of the Jabba's palace characters do," Chee says. "They look Asian to me; let me put it that way." Among those lurking in the shadows are Ardon "Vapor" Crell, Rayc Ryjerd and a mustachioed fellow named Jan Solbidder. And in Cloud City, one of Lando Calrissian's guards is Corman Jeihn, possibly named by Hasbro — or, Chee says, "I think I may have named him."

Then there's the Jedi known as Selig Kenjenn.

"Since there was such a dearth of reference for 'Asian Jedi,' " Chee says, "there was an action figure pack that Hasbro did that featured an Asian male Jedi — who, surprisingly, looks like me."

Chee says he provided photo reference for the character, who was "offscreen at the battle of Geonosis," and that the idea for the action figure might have come from an illustration that accompanied a Wired story about Chee, which depicted him as a Jedi.

"That guy's definitely Asian," Chee says of Selig Kenjenn. "And that one, I definitely named myself."

So does the name carry some special significance?

"Ummmmm, not that I'm going to say," Chee demurs. " 'Selig' comes from one of my other fandoms, I'll say that."

Whatever the case, the relative dearth of Asian characters remains. Beyond the classic trilogy, there's the Chinese-born actor Bai Ling as Senator Bana Breemu, but her scenes were cut from Episode II. And there's a Jedi woman named Bultar Swan.

"Then there's probably a bunch of background guys that don't have names," Chee adds. "Hopefully we'll see some more in Episode VII."

Hopefully, indeed. Christina Chong has reportedly filmed her scenes already, so can the Holocron Keeper say anything about her role in the forthcoming J.J. Abrams-directed sequel?

"Actually, I can't," Chee says. "I don't have any information on that."