Accessibility links
Hawaii As 'Racial Paradise'? Bid For Obama Library Invokes A Complex Past : Code Switch Professor Ellen Wu writes about how the mythology — and the history — of Hawaii as a multicultural melting pot may affect its chances of hosting the Obama Presidential Library.

Hawaii As 'Racial Paradise'? Bid For Obama Library Invokes A Complex Past

Hawaii As 'Racial Paradise'? Bid For Obama Library Invokes A Complex Past 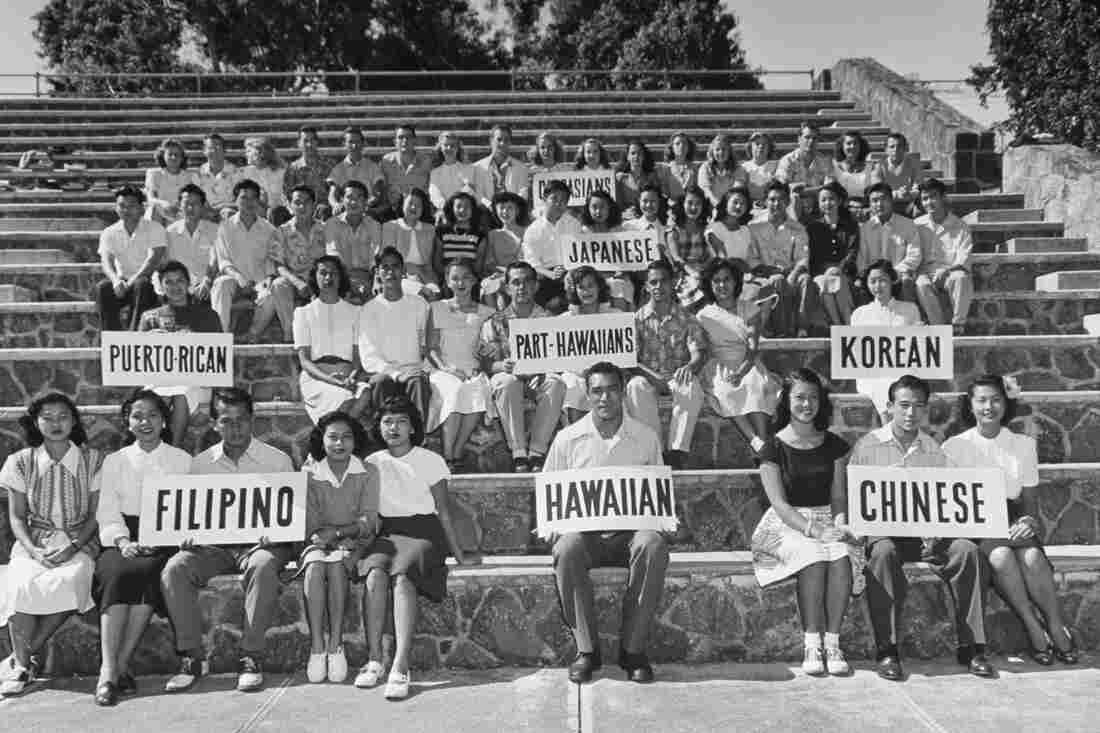 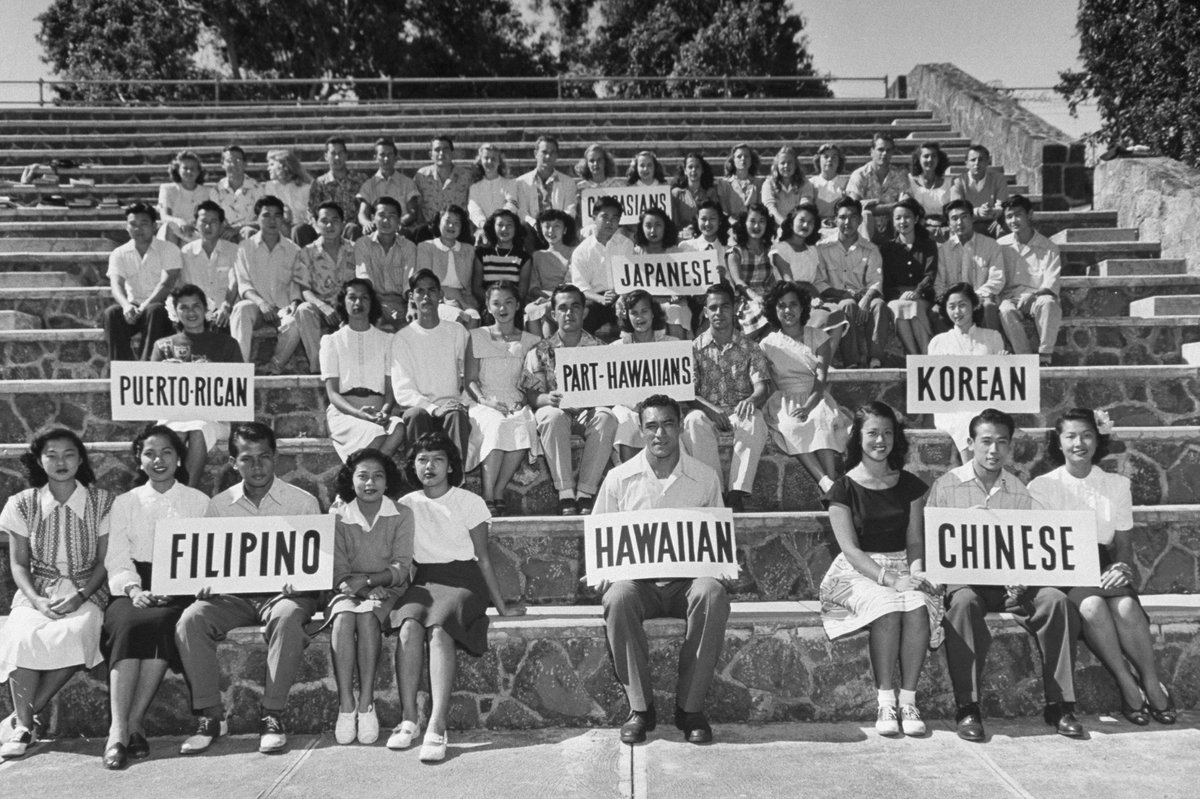 University of Hawaii students sit together to show the ethnic differences of Hawaii's population in 1948.

The frontrunner status of both Windy City schools is now in question. The University of Chicago may lack exclusive ownership rights to the proposed sites, while the University of Illinois anticipates future leadership changes.

Yet media reports still cast Hawaii as the underdog. Its fundraising capabilities are outmuscled by the others. Its location is too remote by mainland standards.

But don't be surprised if Hawaii comes out on top, because the island has a compelling advantage: it's the one place in the U.S. that has long been imagined as a "racial paradise."

By 1945, "Life" pronounced Hawaii "the world's most successful experiment in mixed breeding ... unmatched ... for interracial tolerance and affection."

Liberal white missionaries and sociologists invented this fiction in the early 20th century to convince the nation that Hawaii's significant Asian population was capable of assimilating harmoniously into American life. Asian laborers were the backbone of islands' industrial sugar plantation workforce. By 1945, Life pronounced Hawaii "the world's most successful experiment in mixed breeding... unmatched... for interracial tolerance and affection." Today, the "Aloha State" is widely celebrated as the most racially and ethnically diverse in the country, where hapas and multiracial families are the norm. The Root recently named Hawaii as one of "The Five Best States for Black People."

A presumed racial paradise milieu may seem like an odd asset for a presidential library. But it jives with the narrative that has developed around Barack Obama himself as the very embodiment of our nation's "post-racial promise": the biracial son of a black Kenyan father and white Kansan mother raised in Honolulu and Jakarta with his Indonesian half-sister. Pundits celebrated his improbable election to the presidency in 2008 as a hopeful sign that Americans were finally ready to move beyond racial divides. And in the myriad retellings of Obama's upward trajectory, his Hawaii upbringing is a key factor in his ability to transcend — or at least "blur" — the color line. The "aloha spirit" undergirds his governing style. As Obama himself has said, "I do think that the multicultural nature of Hawaii helped teach me how to appreciate different cultures and navigate different cultures, out of necessity.... There just is a cultural bias toward courtesy and trying to work through problems in a way that makes everybody feel like they're being listened to."

The stakeholders of Hawai'i Presidential Initiative are now framing their pitch for the Obama Library in this familiar fashion. As their website proclaims, "Hawai'i... embodies the multicultural future of the United States. Its unique history and indigenous culture have forged values and problem-solving tools that can be applied to some of the most pressing problems of our time."

Historically, the racial paradise myth has proven to be a winning rhetorical strategy. In the 1940s and 50s, champions of this myth effectively wielded it to achieve another unlikely political objective: Hawaii statehood. At the time, admitting Hawaii to the Union was a longshot because the territory had a majority-Asian population. Southern segregationists like South Carolina Senator Strom Thurmond shuddered at the thought of an "Oriental" state that they imagined as too foreign and too colored to be American.

Savvy statehood proponents countered by reminding the country that Hawaii was a "Pacific Melting Pot" characterized by amity rather than hostility. Some, like Massachusetts Congressman John W. McCormack, even suggested that islanders' unparalleled record in race relations would have a "salutary effect" on the rest of the nation embroiled in the life-and-death struggles of the Civil Rights Movement. The argument helped to convince the American public. The territory of Hawaii became the 50th state in 1959.

Crucially, the racial paradise claims made sense only by omitting the contentious, violent history of the United States' illegal seizure and colonization of the Independent Kingdom of Hawai'i. Native Hawaiians suffered greatly under U.S. rule. Many of them opposed both annexation (1898) and statehood. Erasing the struggles of Hawaii's indigenous peoples allowed Americans to portray themselves as inclusive and benevolent. For U.S. political leaders, this was a high-stakes maneuver. They believed that they needed to tell such a story to legitimate America's claim to being the leader of the free world in order to win the Cold War.

The mythology of Hawaii as racial paradise has enjoyed political utility well beyond the statehood debate. As the nation sought "law and order" fixes to the urban crises of the late 1960s, observers again praised Hawaii as a model. Journalists drew clear contrasts between the islands' residents and African American protesters in northern cities. As one put it, "In Detroit, Newark, and other big cities, it's the young Negro who is the disillusioned troublemaker. In Hawaii, it's the young generation which is building up a loyal citizenry, setting an example of racial understanding." The effect of such commentary was to undermine the legitimacy of black grievances.

It seems more than coincidental, then, that Hawai'i Presidential Initiative boosters are recycling an old story for this new purpose. Hawaii's "traditions of compromise and dialogue," reflected in Obama's "unifying vision," ostensibly supply a solution to an intractable problem. For a nation that is struggling to square the tensions between colorblindness and the surging Black Lives Matter movement, an American racial paradise — however mythic — might just be too seductive to pass up.

Ellen Wu is associate professor of history at Indiana University. She is the author of The Color of Success: Asian Americans and the Origins of the Model Minority, recently published by Princeton University Press. Follow her on Twitter @ellendwu.