Accessibility links
Barbie Has Some Royal Competition In Nigeria : Code Switch The Queens of Africa are based on Nigeria's three largest groups — Igbo, Yoruba and Hausa — and each has traits meant to empower the girls who play with them. 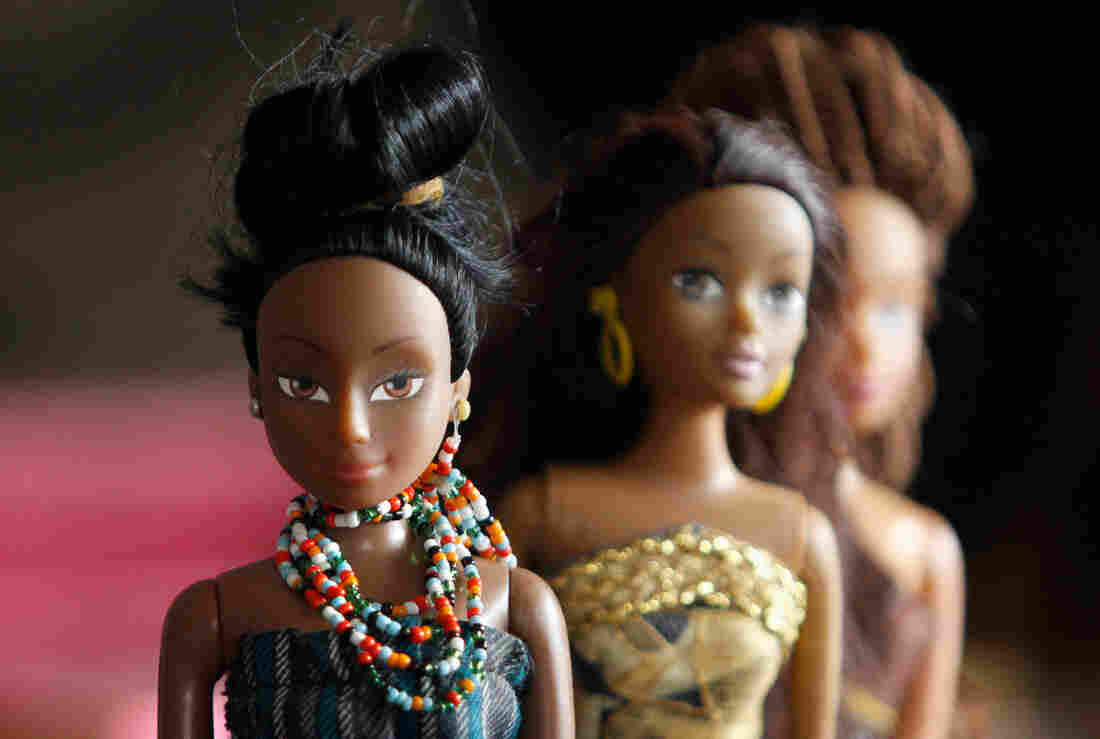 Taofick Okoya sells between 6,000 and 9,000 of his Queens of Africa and Naija Princess dolls a month and reckons he has 10 to 15 percent of a small but fast-growing market. Akintunde Akinleye/Reuters/Landov hide caption 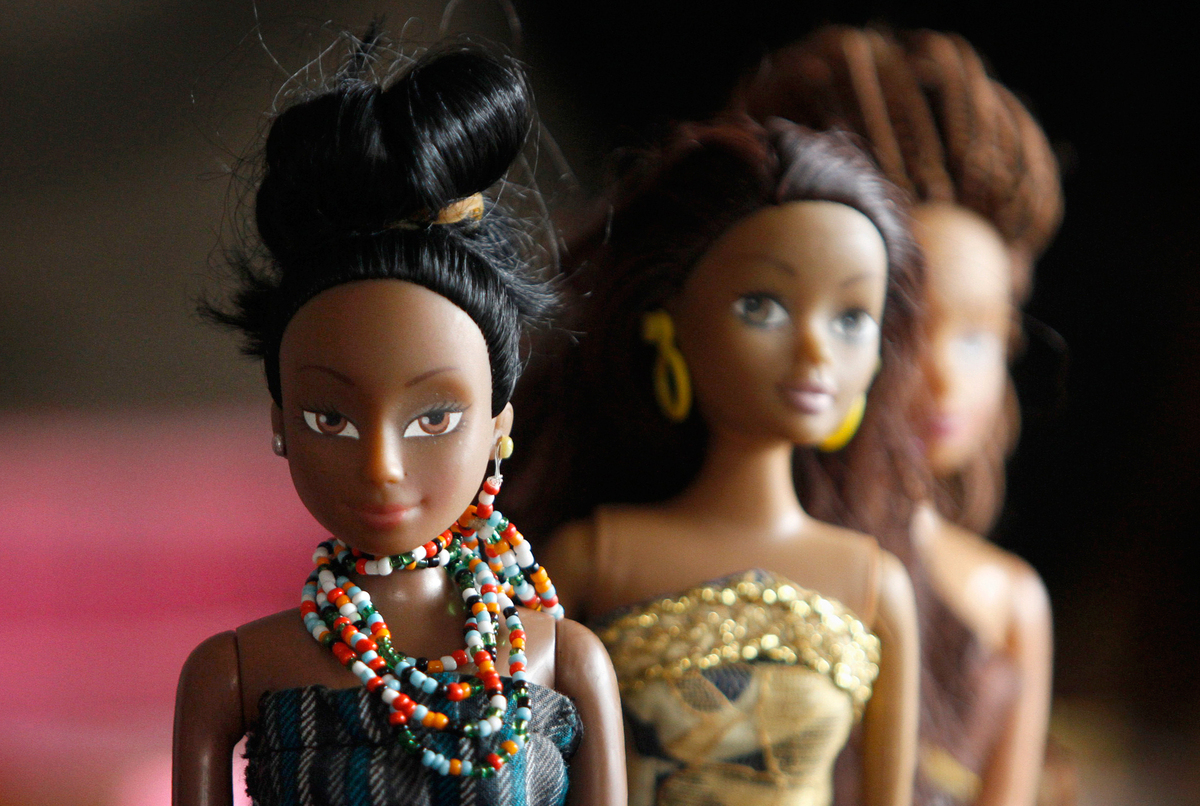 Taofick Okoya sells between 6,000 and 9,000 of his Queens of Africa and Naija Princess dolls a month and reckons he has 10 to 15 percent of a small but fast-growing market.

In Nigeria, Barbie has some fierce — some brown — competition: Taofick Okoya, a 43-year-old entrepreneur, has created Queens of Africa dolls and Naija Princess dolls that are outselling Mattel's classics. Okoya tells Reuters that he sells about 6,000 to 9,000 dolls a month and that he has "about 10-15 percent of a small but fast-growing market."

For some context, we've been seeing the alabasterness of dolls become more of an issue in America as of late, including this recent skit on Saturday Night Live. Last year, American Girl Doll discontinued some of its nonwhite dolls — Ivy Ling, an Asian-American doll, and Cecile Ray, an African-American doll — to much controversy. In 2013, Mattel came under fire for its Mexican Barbie, which was marketed with a passport and a chihuahua. 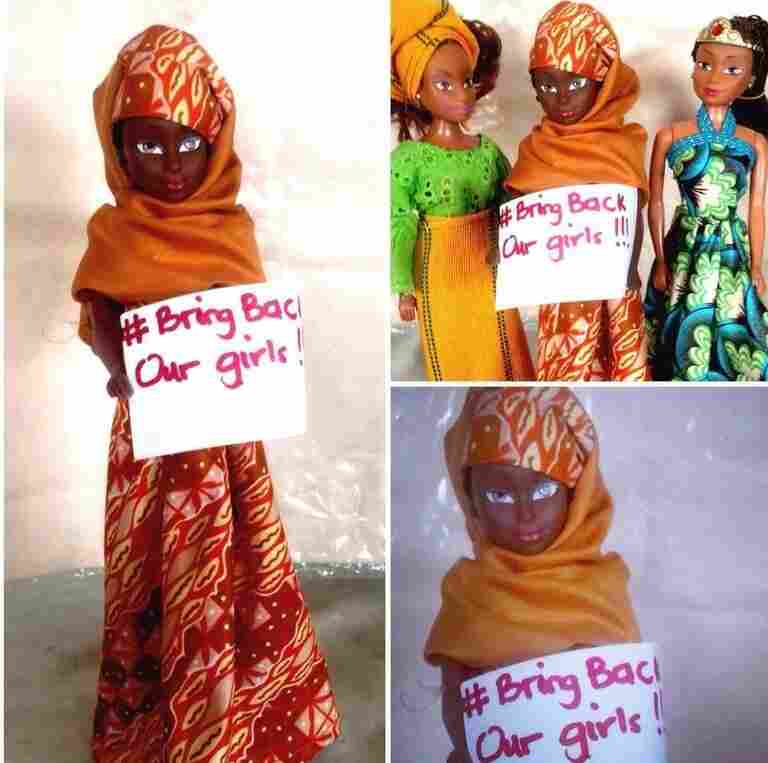 On the company's website, three of the dolls are shown holding a #BringBackOurGirls sign — another marker of the company's focus on social responsibility. QueensOfAfricaDolls.com hide caption

The Queens of Africa dolls are based on Nigeria's three largest groups — Nneka is Igbo, Wuraola is Yoruba, and Azeezah is Hausa — and each has traits that are meant to empower the girls who play with them. On the company's website, there's even a photo of the three dolls holding a #BringBackOurGirls sign. (Okoya has also created books that pair with each of the dolls, so those traits are doubly reinforced.)

"All the dolls in the house were all white, and I was like, 'Oh, OK, that's a problem,' " Okoya says in a video promoting his dolls. "Because when you load a child with all this, it becomes an acceptable form of ... how you should look. And so I thought, I want to use my dolls to teach Nigerian culture, African culture."

"The 'Queens of Africa' definitely fill a void in the market. I say this because the first reaction we got from retailers was resistance. They said, 'black dolls don't sell.' I then embarked on an educational campaign via various media, telling people about the psychological impact dolls have on children, and dolls in the likeness of the African child can have on them. It took almost three years for the idea to get accepted."

Okoya tells Reuters that he's shipping more and more of his dolls abroad — including to the U.S. So maybe we'll be seeing more of these dolls on our shelves.