Accessibility links
A Brief, Weird History Of Squashed Asian-American TV Shows : Code Switch With Fresh Off The Boat making waves, we look back at a colorful crop of shows with Asian-American leads that most of us have forgotten.

The intro to the shortly-lived drama, Mr. T and Tina.

ABC's new family sitcom Fresh Off The Boat is making big waves in the conversation about how Asian-Americans are depicted on TV in the U.S. — which, for the most part, is sparsely.

"Culturally, we are in an ice age," celebrity chef Eddie Huang said in a recent New York Times profile. Huang's memoir of the same name inspired the show. "We don't even have fire. We don't even have the wheel," he wrote. "If this can be the first wheel, maybe others can make three more."

People have tried to get this wheel rolling before. Margaret Cho's All-American Girl aired briefly in the 1990s. And before that, there was Mr. T and Tina in 1976, a family sitcom starring Pat Morita (you may know him as Mr. Miyagi).

We decided to take a look back at shows that featured Asian-American leads (or themes, in the case of Kung Fu). Like Fresh Off the Boat, some of these were called "groundbreaking" in their time, though most have wound up with little more than IMDB pages marking their existence. Maybe Fresh Off The Boat will be different.

Set in the mid-19th century, Kwai Chang Caine is a half-Asian, half-white, kung fu-practicing Shaolin monk who wanders the old American West searching for his long-lost half-brother and the mysterious story of his roots.

"As an Oriental," a Washington Post critic wrote in 1972, "[Caine] is regarded by Occidentals with suspicion and contempt. All of which the Shaolin priest responds to with spiritual presence, quiet strength and humility. All of which provides script writers with endless possibilities, enough material to run the series for years, if only enough viewers will respond." 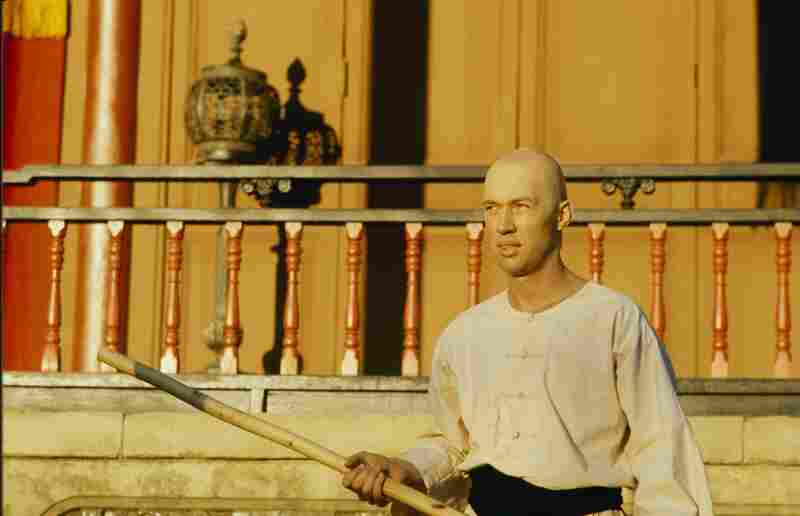 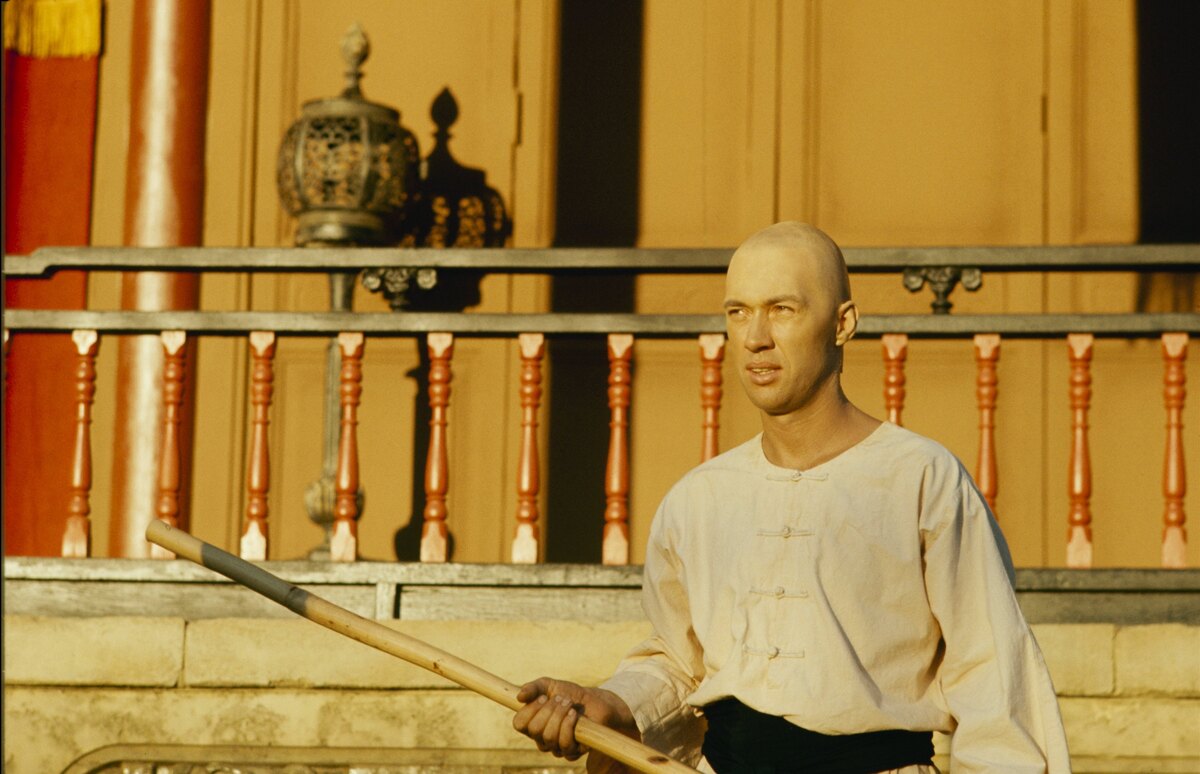 As it turned out, the show ended after just three years, when Carradine decided to quit. (He later reprised his role in 1986 for Kung Fu: The Movie.) But viewers did respond; the show topped Nielsen ratings in its first season and went on to snag Emmys for best director and best cinematography in 1973.

(And we can't talk about Kung Fu without addressing its controversy. After Bruce Lee's death in 1973, his wife, Linda, said that he had come up with the concept of the show and that Warner Bros. had stolen it from him. The network denied this. In an an earlier interview with Pierre Berton — possibly Lee's only one — the star mentioned a Western-style show called The Warrior that incorporated kung fu. He said he was struggling to develop the show with Paramount and Warner Bros.)

Gung Ho, a TV comedy about an American car company that's been acquired by a Japanese manufacturer, couldn't have aired at a worse time. The U.S. auto industry was in free fall, and anti-immigrant sentiment ran high across the Rust Belt. And just a few years earlier in Detroit, a Chinese-American named Vincent Chin had been mistaken for a Japanese auto worker and beaten to death. Gung Ho lasted nine episodes and was the lowest-rated program in 1987.

Its intro gives you a sense of how tonally off the show (based off of a movie of the same name, starring Michael Keaton) was.

Newspaper critics also blasted the show for its portrayals of Asian-Americans.

" 'Gung Ho' ... is one of the more overtly racist television series to hit the airwaves since 'Amos and Andy,' " TV critic Ruth Daniel wrote in the Chicago Sun-Times. "But since the jokes are directed toward the Japanese, who represent something of a minority's minority in the United States, ABC may be gambling that 'Gung Ho' will generate a minimum of protest."

The series was also compared to Mr. T and Tina (ABC, 1976), which co-starred Pat Morita, best-known as Karate Kid's Mr. Miyagi, and was one of the very first American sitcoms to feature an Asian-American lead — and was also panned as racist.

" 'Gung Ho' ... is so blithely crude in its portrayal of Asian characters that it should be called 'Model T and Tina,' " wrote Noel Holston, a writer at the Minneapolis Star Tribune.

After Pat Morita's string of roles in Mr. T and Tina and Karate Kid, he went on to play a Japanese-American police lieutenant named Lt. Ohara. Ohara used the power of meditation to solve crimes in Los Angeles and often said things like, "The winter is cold, but the robin has a song to sing" or "The ox without a cart is only good for slaughter."

This clip is a good example:

Morita insisted these odd nuggets of wisdom weren't his idea. "Hey, I wouldn't pass these kinds of sayings down from one generation to another," Morita said in one interview. "This stuff comes from the writers."

One of the first American dramas to portray Asian-American men as attractive and desirable, this hourlong martial arts drama featured an often shirtless Russell Wong, whose multitudinous lady admirers were both Asian and not. (You could say he was the Walking Dead's Steven Yeun of the 1990s.) Wong's Jian-Wa escapes to the U.S., with his brother, after a student crackdown in Beijing. The brother gets killed, Wong gets framed, and he spends the rest of the 13-episode series "using his wisdom, music, and martial arts skills to solve problems along the way."

But for many viewers, the plot was not the show's main attraction. Vanishing Son "relies on a rather large dose of hunk factor," Jeff Yip wrote in the Los Angeles Times in 1995.

A part of Universal TV's "Action Pack" block in the mid-1990s — alongside Hercules, Bandit and TekWar — the show first appeared as set of six made-for-TV movies. It got replaced by Xena.

The Chang Family Saves The World

There's not much information about it, but the IMDB description speaks for itself: " 'Fame' phenomenon Nia Peeples is the star of 'Meet The Changs,' a TV pilot about the mystical story of a Chinese family." (Around this same time, Ridley also produced another sitcom pilot that never made it to air: I Got You, which starred Ming-Na Wen, Duane Martin, Eric Kan and Suzy Nakamura.)

Guy Aoki, creator of the Media Action Network for Asian Americans, chatted with me and said he saw the pilot in 2002 and described it as "horrendous."

Interestingly, this isn't the only John Ridley-helmed project starring an Asian-American lead that never made it past a pilot. I Got You was supposed to be about an Asian woman in a relationship with a black man and would have starred Ming-Na Wen (Joy Luck Club's June), Burt Bulos (Beverly Hills Ninja), and Duane Martin (Real Husbands of Hollywood).

Before you go hollerin' in the comments, this isn't meant to be a comprehensive list. We wanted to highlight lesser-known network shows with Asian-American ensemble casts or ones that dealt more explicitly with race. Let us know below what we missed.