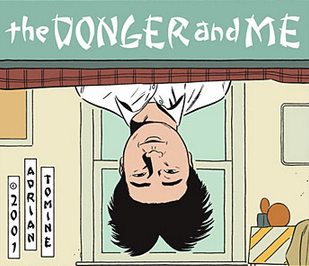 On Friday, I explained what's "cringeworthy" about Sixteen Candles' Long Duk Dong, whose broken English and social ineptitude left a painful stamp on many Asian-American children of the '80s.

Keith Chow, creator of the pop culture blog Nerds of Color, reminded me that graphic novelist Adrian Tomine took on the legacy of Dong in his 2001 comic "The Donger and Me," in which he recalls watching Sixteen Candles for the first time.

At school, classmates try to get Tomine to playact the character's lines: "C'mon ... just say, 'Whassa happening, hot stuff?' " and "Say, 'No more yankee my wankee!' "

Later, a grown-up Tomine has a chance to interview Gedde Watanabe, who played Dong, and is raring to give the actor a piece of his mind. And yet, after their talk, Tomine finds himself charmed:

"My impression is that he's a funny, honest guy whose desire to be a professional actor supercedes any sense of political correctness," his character tells us. "And when you consider how hard it is for Asian-American actors to get work in Hollywood, he's got a pretty impressive resume. I think his dedication is actually kind of admirable."

But then Tomine watches Watanabe playing the minor character Chan in the 1997 movie Booty Call. I can't find much about that role, but from Tomine's response, it doesn't sound positive:

Check out the full comic, "The Donger and Me".