Accessibility links
Part Asian-American, All Jewish? : Code Switch After years of dealing with doubters, one writer examines the lives of other people with mixed Asian-American and Jewish heritage, and what that means for their faith. 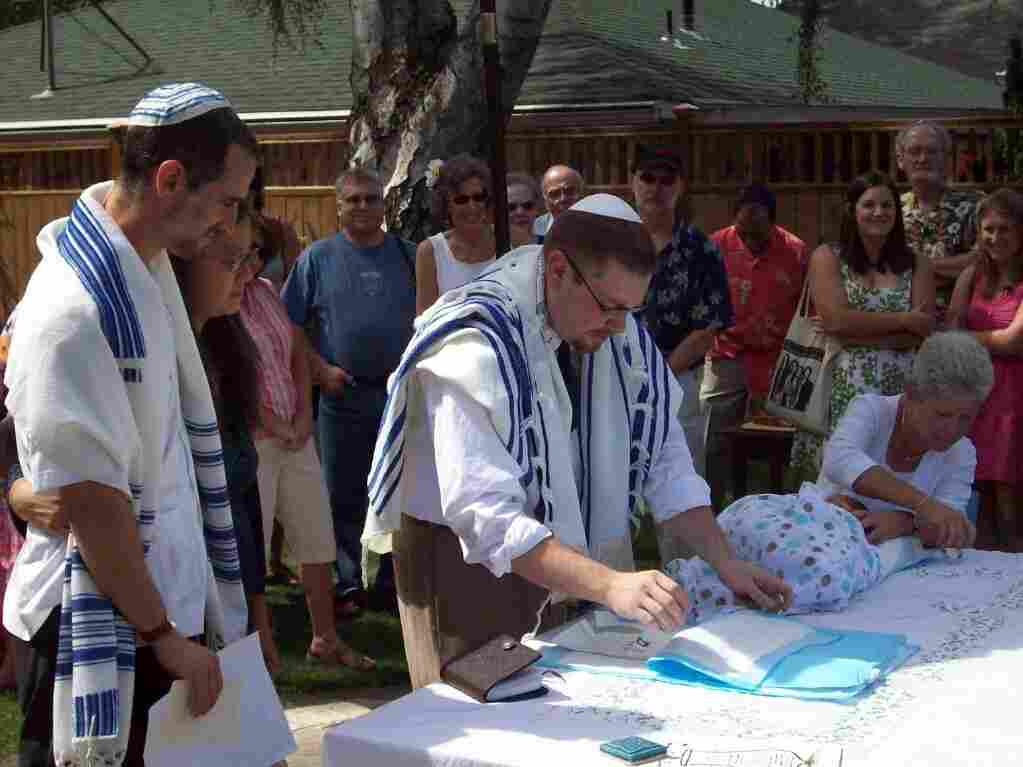 Sociologists Helen Kim and Noah Leavitt look on during their son Ari's bris. They've worked together to research how kids with mixed Asian-American and Jewish heritage think about faith. The Kim-Leavitt family hide caption 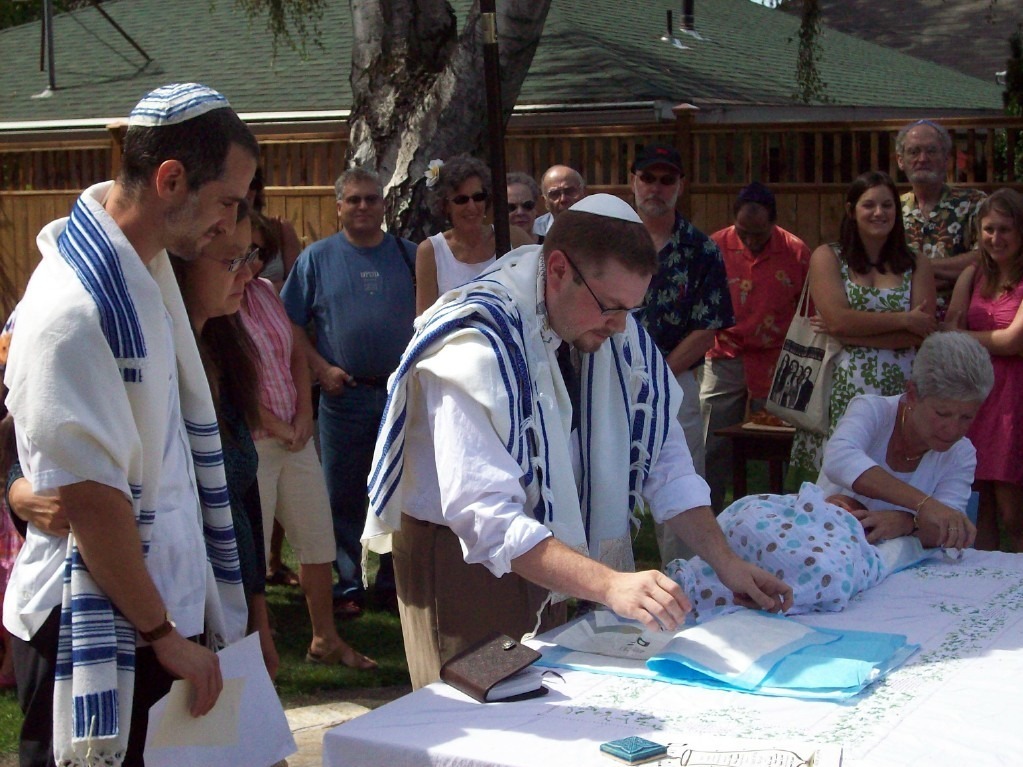 Sociologists Helen Kim and Noah Leavitt look on during their son Ari's bris. They've worked together to research how kids with mixed Asian-American and Jewish heritage think about faith.

I was five years old when my mother threatened to give me away to journalist Connie Chung.

It was then that I had a startling realization: I was special. Not special in the way that everyone's kids are special — I mean really special. I, with my chubby Chinese cheeks and frizzy Jewish hair, was a unique snowflake, shaped like the Star of David, dusted with matcha green tea powder.

"I'm special!" I announced. "Famous people want to adopt me!"

Mom rolled her eyes as if to say, oy vey.

Only later would I learn the truth: Not everyone was as thrilled about my heritage as I was. The problem was mainly on the Jewish side. As I grew up, announcing I was Jewish often felt "like trying to cross a border with borrowed credentials," in Joan Didion's words. "But you don't look Jewish!" came the incredulous reply. Some even implied that the union that produced me was nothing less than a threat to the Jewish people — that I was what was wrong with Judaism today.

This view, it turns out, is ancient. "You shall not marry (gentiles), you shall not give your daughter to their son ... because he will lead your son astray from Me and they will serve strange gods," it is said in Deuteronomy. Thousands of years later, many still share this opinion.

"Intermarriage is a serious concern," Steven Cohen, a professor at Hebrew Union College, told me recently. "It weakens Jewish commitment and diminishes the number of people who identify as Jews."

Cohen was referring to the fact that children of intermarried Jews tend to be less religiously Jewish than those born to two Jewish parents, as found in the Pew Research Center's 2013 Portrait of Jewish Americans. But there's another way of looking at it. While they may be less religious, more and more mixed-race Jews are choosing to identify as Jewish. Among the adult children of intermarried parents surveyed, as many as 59 percent identified as Jews.

Kosher or not, no amount of hand-wringing will change the fact that intermarriage is happening. Since 2005, 6 in 10 Jews who married chose a non-Jewish partner, according to the Pew report. Faced with this reality, even staunch anti-intermarriage scholars are beginning to make concessions. Upon realizing that I was a mixed-race Jew, for instance, Cohen still encouraged me to marry Jewish. He also assured me that — even if I didn't — I would still be welcomed by the Jewish community.

Two scholars on the forefront of understanding the changing face of Judaism are Helen Kim and Noah Leavitt, sociologists at Whitman College in Washington state. For the last decade, Kim and Leavitt have trained their attention on the intersection of Jewish and Asian cultures. This is no coincidence: The two are a Korean-Jewish couple, raising two Reform Jewish children. Every week, they celebrate Shabbat dinner, observe the Sabbath as a day of rest and perform the Havdalah service as a family. 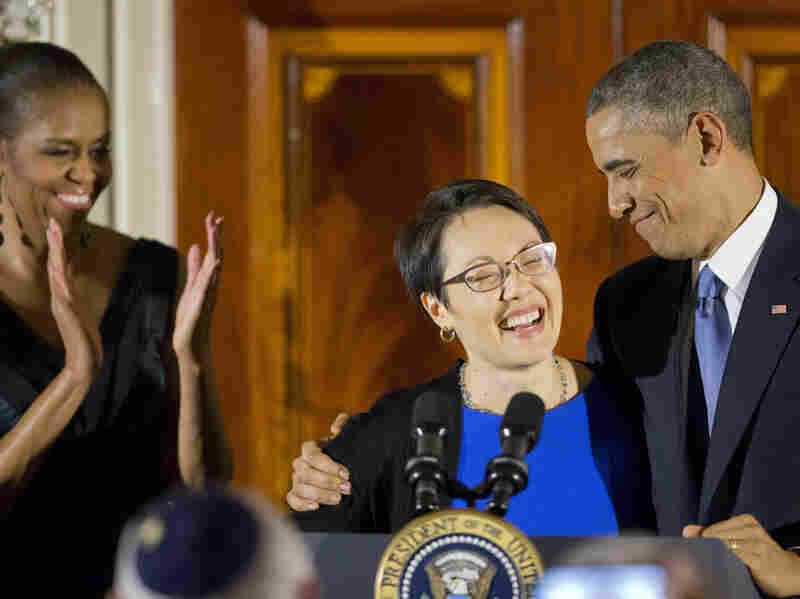 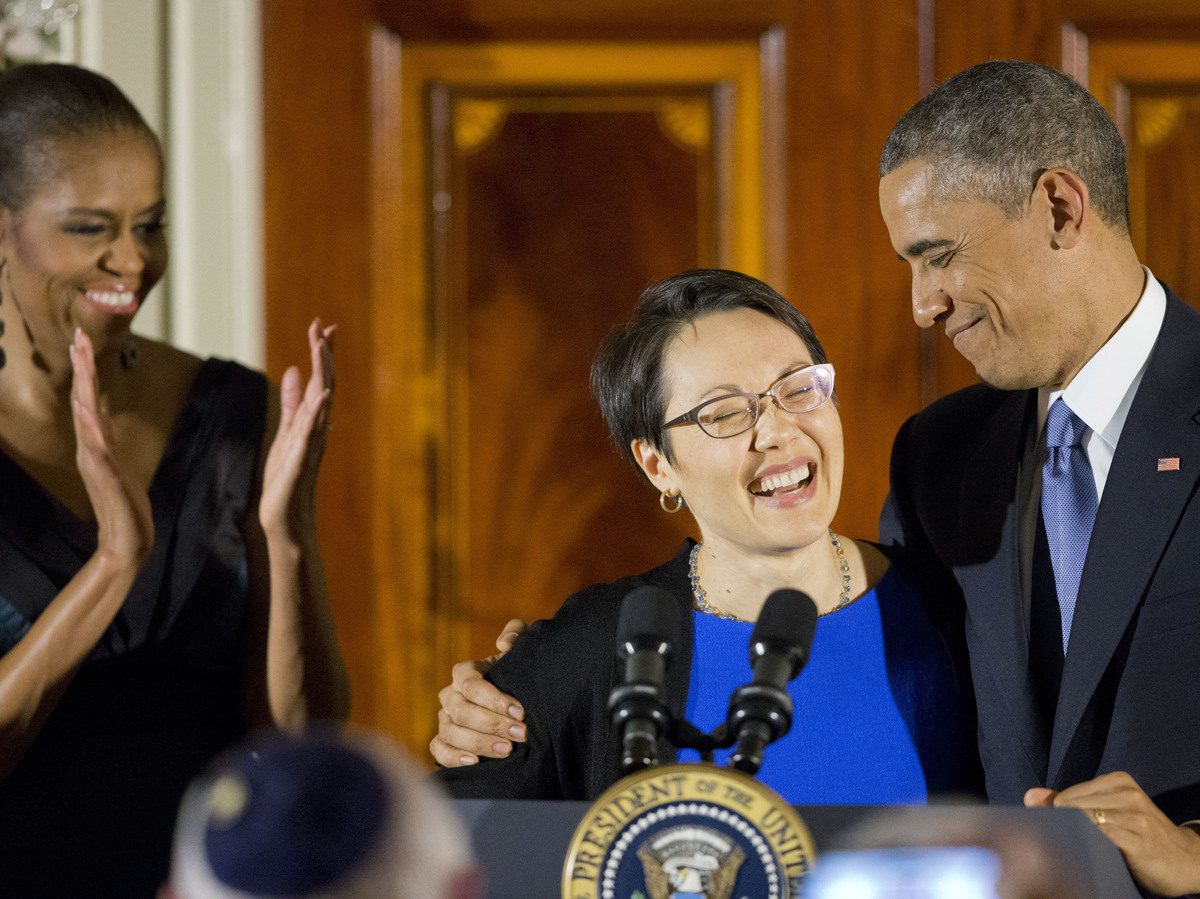 Kim's and Leavitt's interest began when, flipping through the The New York Times style section, they noticed something strange. Suddenly, it seemed that more and more couples looked like them. Jewish-Asian pairings filled the news, from "Tiger Mom" Amy Chua and husband Jed Rubenfeld to Facebook's Mark Zuckerberg and Priscilla Chan.

Some children of these marriages are grown up and in the news, too. Angela Buchdahl, the wildly popular Korean-American rabbi of New York City's Central Synagogue, has written about facing challenges to her faith as a young adult.

"I did not look Jewish, I did not carry a Jewish name and I no longer wanted the heavy burden of having to explain and prove myself every time I entered a new Jewish community," Buchdahl recalled in a 2003 essay in the journal Sh'ma.

Once, she even told her mother she wanted to give up Judaism. "Is that possible?" her mother asked.

"It was only at that moment that I realized I could no sooner stop being a Jew than I could stop being Korean, or female, or me," Buchdahl wrote.

The affinity between Jews and Asians has some grounding in culture, according to Kim and Leavitt. In 2012, they published a study that sought to explain what draws these two ancient cultures together. Both Asians and Jews, they found, shared deeply ingrained values of academic achievement, strong family ties and frugality. There are also fewer religious barriers: While Asian-Americans may subscribe to a philosophical system like Buddhism, less often do they have overt religious beliefs that clash with Judaism.

As the pair began to raise their two children — Ari, 6, and Talia, 3 — their questions changed. How would Jewish values translate to mixed-race kids, they wondered? 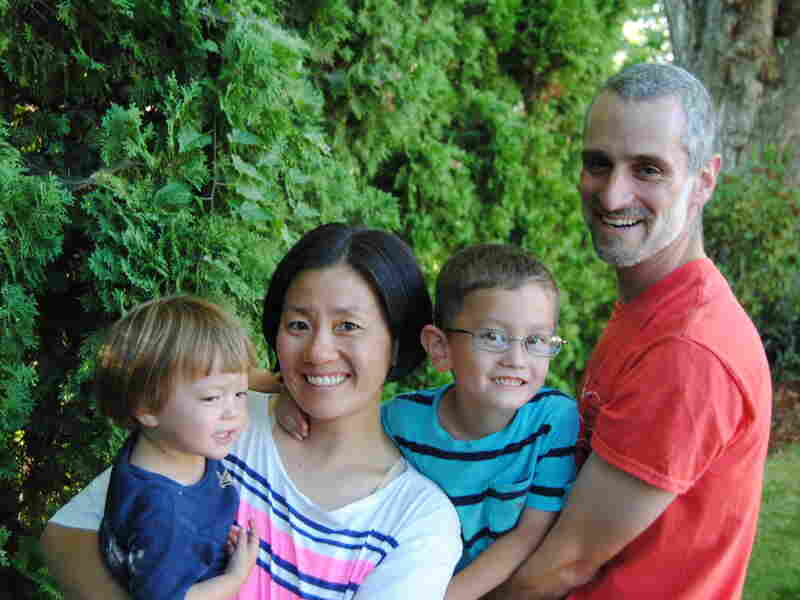 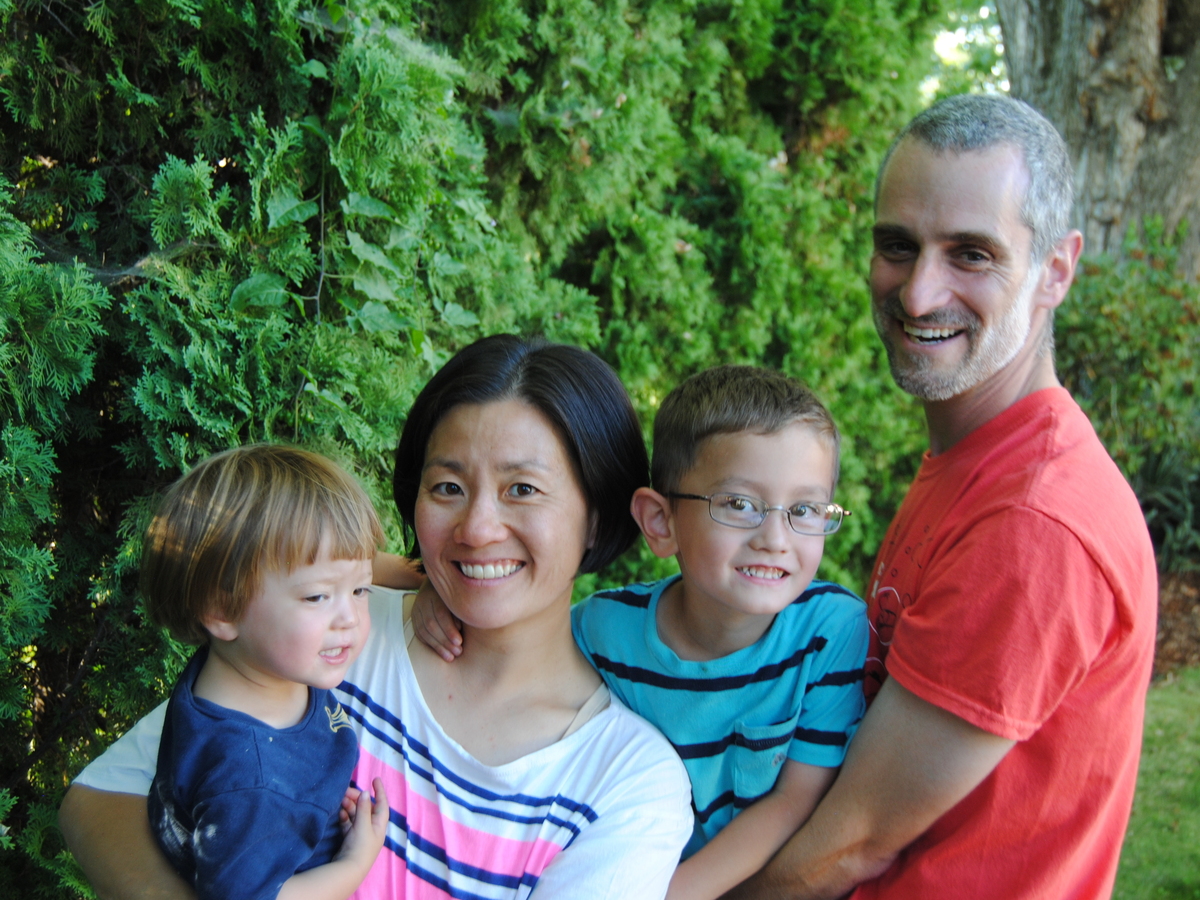 Sociologists Helen Kim and Noah Leavitt with their children Talia and Ari.

"This was the logical next step," says Leavitt. "We wanted to know how these kids are going to make sense of the different strands of who they are." So they decided to do something novel: ask the kids themselves. For their next study, published last month in the Journal of Jewish Identities, Kim and Leavitt conducted in-depth interviews with 22 children of Jewish-Asian marriages.

What they found flew in the face of the scenario Cohen described. Overwhelmingly, the young adults they talked to considered themselves Jews — no "ish" about it. The majority grew up going to Hebrew school or Jewish day school, attending synagogue, celebrating the High Holidays and feeling part of a larger Jewish community. Half had been bar or bat mitzvahed. Most wanted to pass on a sense of Jewish identity to their own children.

"These kids are Jewish, they really are," says Kim.

Unfortunately, a strong sense of personal Jewishness didn't stop the haters. At school, in the synagogue and in casual conversation, respondents recalled getting the same doubtful looks and comments that I did. If it wasn't "Funny, you don't look Jewish," it was "Oh, you must mean half-Jewish." (This is usually the case when your father is Jewish; in more traditional strains of Judaism, it is believed that Jewish identity flows through the maternal line.)

Refreshingly, the respondents managed to turn these confrontations into opportunities. "They felt that they had to assert their Jewishness in a much stronger way," says Kim. "So they'd end up saying, 'I am legitimately Jewish, and you're wrong in your assumptions about me — and Jews.' "

As an exploratory first paper, the study was limited. Besides the small sample size, almost all of the participants had Chinese or Japanese heritage, and none were raised Orthodox Jewish.

Nevertheless, Kim and Leavitt's approach is "highly original and needed," says Keren McGinity, the editor of the journal in which the work was published, and a Jewish historian at Brandeis University who specializes in intermarriage. "The very idea that there can be multi-racial, multi-ethnic Jews is a wake-up call."

Far from being "diluted," these mixed-race Jews saw themselves as critical to what today's Jewish values are all about. For them, "multi-raciality and Jewishness are intrinsically tied together," the authors wrote.

"These kids are thinking about being Jewish in a variety of ways," says Leavitt. "Spiritually, religiously, culturally, ethically. It's a huge smorgasbord of what parts of Judaism they draw on to connect with."

This question is always a tricky one. Do I cite my grandmother's matzo ball soup? My love for the lilt of Hebrew prayer? The fact that I was so drawn to my Jewish roots that I ended up working for a Jewish magazine? Like Buchdahl, I can no more explain what makes me feel Jewish than what makes me feel Chinese, or female, or human. I usually go with, "It means I really, really like Chinese food."

The point, for Kim and Leavitt, is that today's Jews have a choice. For millennia, being Jewish was like being pregnant: You either were, or you weren't. But as the number of Jews with hyphenated identities continues to rise, that idea needs rethinking. Maybe it isn't an all-or-nothing affair. Maybe the question shouldn't be, "Are you Jewish?" but: "How are you Jewish?" Maybe, for some, being chosen can be a choice.

Rachel is a writer and editor at Moment Magazine, an independent Jewish magazine. Her work has appeared in The New York Times, The Atlantic, WIRED, New Scientist and Slate. Follow her on Twitter at @rachelegross.