Accessibility links
Haitian's Lynching Renews Protests Against Dominican Citizenship Law : Code Switch The killing of a Haitian man sparks debate amid a government initiative to reclassify who is a Dominican citizen. 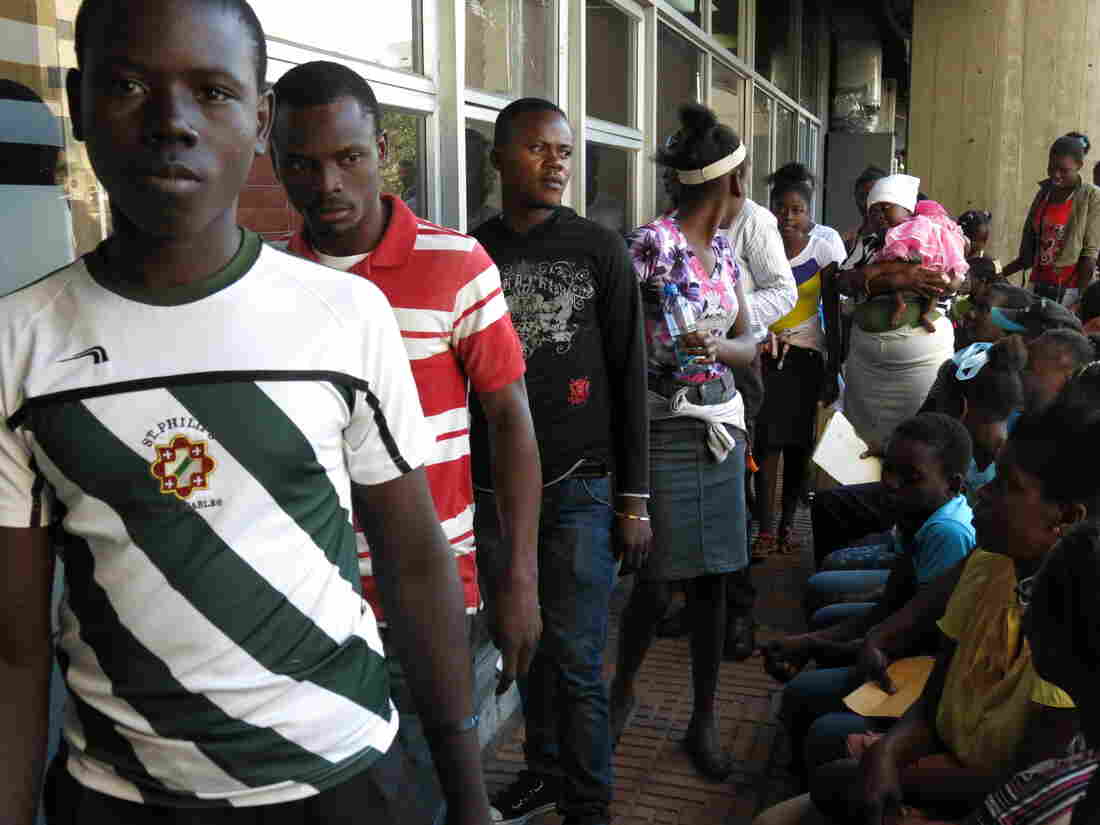 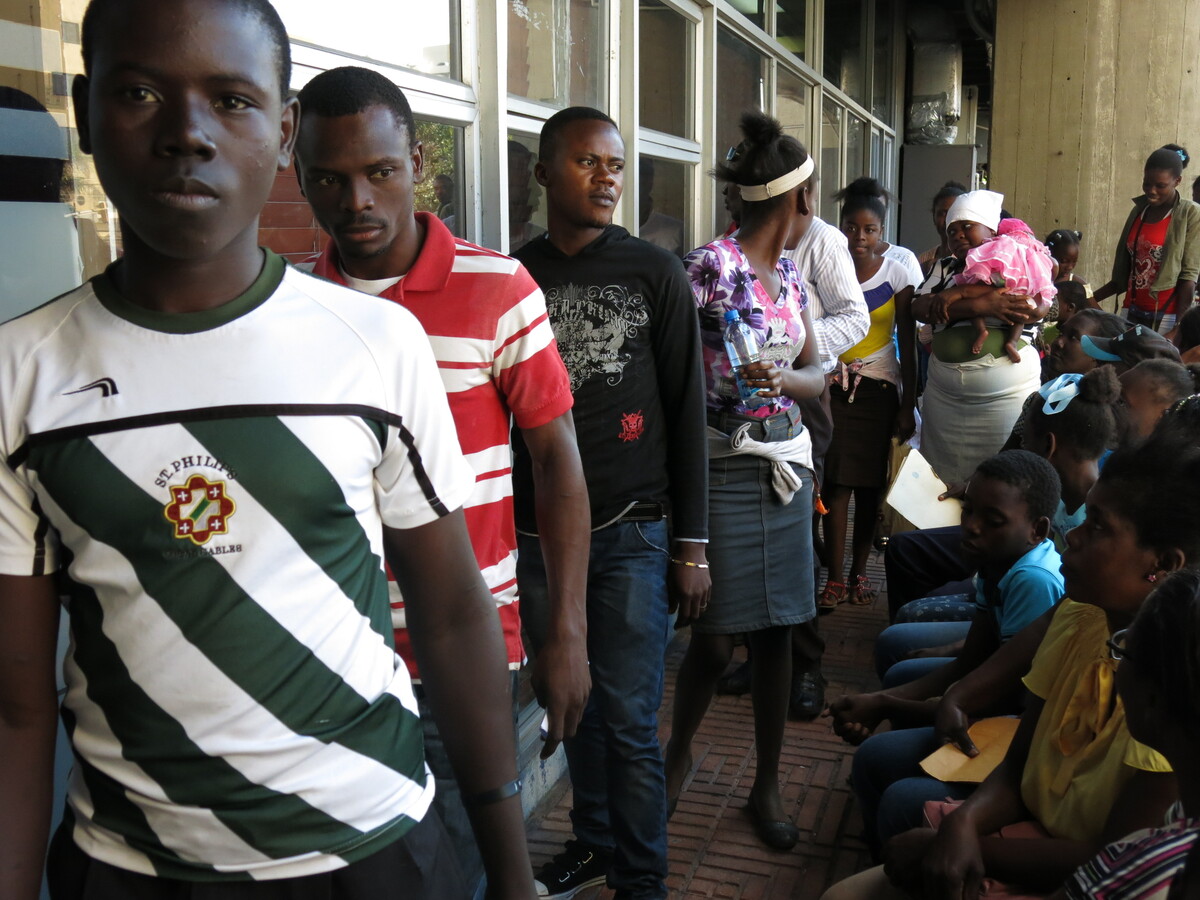 A Haitian man was lynched at a public plaza in the Dominican Republic this week. Authorities there say it was the result of a personal dispute, but activists claim it's part of rising racial animus and anti-Haitian attitudes in the Caribbean nation.

The lynching came during an already tense time for Dominicans of Haitian descent in the Dominican Republic. Feb. 1 marked the deadline for tens of thousands of them to report to the country's civil registry to prove that their ancestors came to the nation legally. Those who didn't — or couldn't — comply with the deadline could be deported. For many of those affected, that could mean being deported to Haiti, a place where they've never lived, where they may not have any remaining family, and may not know the language.

This is all the result of a 2013 ruling by the Dominican Republic's constitutional court which retroactively stripped citizenship of people whose ancestors migrated to the country and who can't prove that the migration was legal. The change applies to anyone born after 1929, potentially affecting an estimated 240,000 Dominicans. The vast majority are people whose family migrated from Haiti. 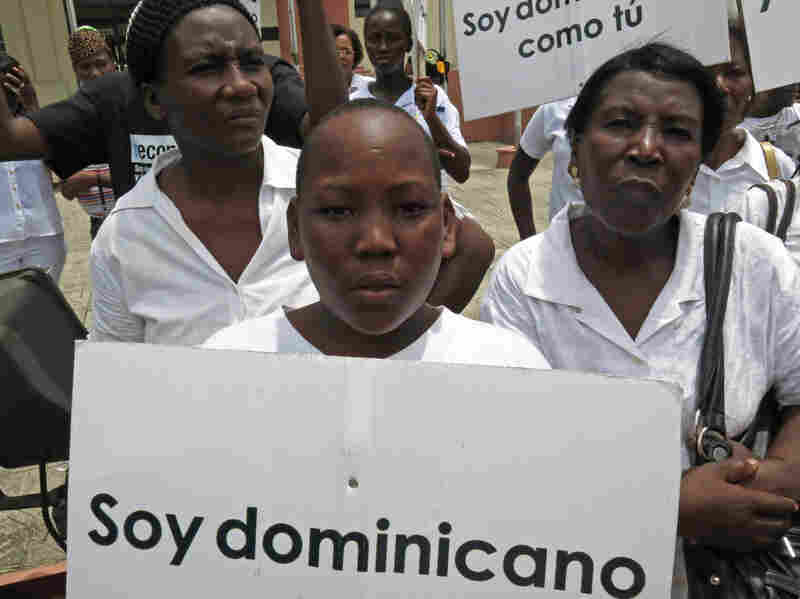 Demonstrators from a 2013 protest against the Dominican Republic's constitutional amendment restricting citizenship hold signs saying "I am Dominican just like you." Ezequiel Abiu Lopez/AP hide caption 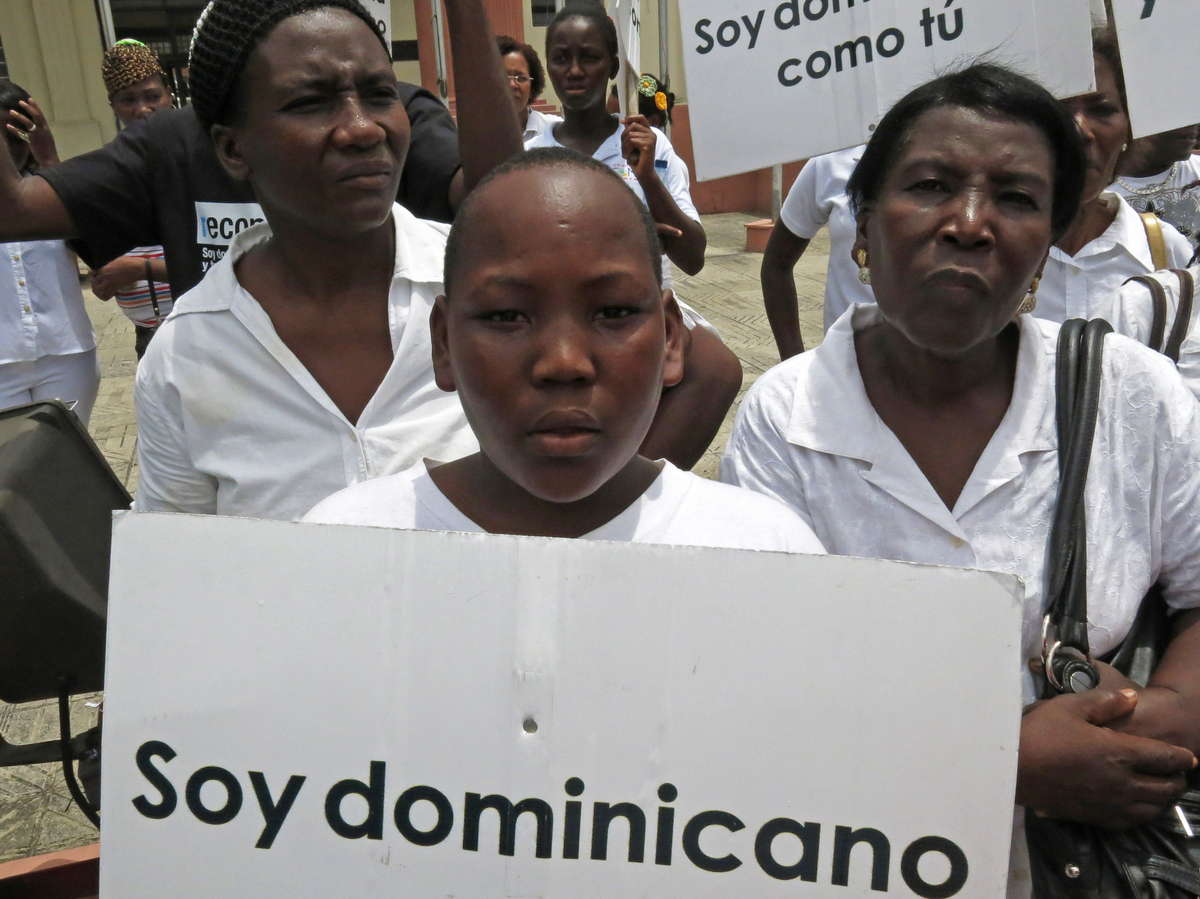 Demonstrators from a 2013 protest against the Dominican Republic's constitutional amendment restricting citizenship hold signs saying "I am Dominican just like you."

The February registration deadline actually represents a concession by the Dominican authorities. Originally, the 2013 ruling allowed for immediate deportation without any chance of appeal. But after international protests, a court ruling created a process for obtaining a residence permit.

Under the current rules, anyone without proof of their birth or the birth of their parents in the Dominican Republic is required to register as a foreigner — even if they were born in the country. Amnesty International estimates that less than 5 percent of those people eligible to register actually did, leaving tens of thousands now stateless.

In recent years, the Dominican government began cracking down on migrants arriving from neighboring Haiti, especially following the earthquake in 2010 when the Dominican Republic briefly opened its border to Haitian refugees.

The Dominican Republic has a long, contentious history with Haiti, which together make up the island of Hispaniola. Many critics accuse the Dominican government of purposely reinterpreting the citizenship policy to discriminate against Dominicans with Haitian ancestry.

"When you have individual actors in the form of government coming together to create major bureaucratic hoops, it's clear that there is some discriminating intention," says Angela Fernandez, executive director of the North Manhattan Coalition for Immigrant Rights. "The underclass has already been created by Dominican society and the government. What this does it compound the issue more for Dominicans of Haitian descent."

Chiara Liguori, Caribbean researcher for Amnesty International, says the Dominican government also executed the registration process poorly. "They put some ads on TV and radio, but not in communities where these people live, the most marginalized areas of the country," she says.

She argues that local governments purposely created obstacles for the most vulnerable "Haitian-Dominicans" affected by the law. "They instituted fees that are a burden for those who need it. Most can't afford it," she says. "And [local governments] were requesting documents that they didn't need to present."

"We are extremely worried because the authorities continue to deny the existence of statelessness, but it's our reality."

Juan Alberto Antuan Vill, — who is Dominican-born and of Haitian ancestry— says he was denied identity documents, despite being listed in the Dominican civil registry since birth. He told Amnesty International, "We don't trust the whole process because of the people leading it. Discrimination exists in this country. I can't work and I can't access vital services."

Organizations such as the International Campaign to End Apartheid in the Dominican Republic, have called for a boycott of Dominican tourism, products and services. And activists from We Are All Dominican, an advocacy group providing support for denationalized Dominicans, staged a vigil outside the office of a Dominican-American councilman in New York City. Their members say the recent lynching "symbolizes an act of racial terror against Haitians and Dominicans of Haitian descent" and that the attempt to denationalize Haitian-Dominicans is a violation of human rights.

"The message the Dominican government has sent to the international community is that it does not care about its human rights obligations," says Javiela Evangelista, a member of We Are All Dominican. "Moreover, the Dominican Republic's actions send a dangerous precedent for other governments."

In a statement to NPR, the Embassy of the Dominican Republic in Washington, D.C., rejected claims of limited accessibility and arbitrary fees, noting that the government has set up 24 service centers throughout the country for people to register and has dedicated more than $25 million to "ensure that applications represent no cost burden for those applying."

"The number of people born in the Dominican Republic not registered locally is unverified but it is estimated that it reaches only several thousands," the statement reads. "Following the deadline for submissions on February 1st, 2015, after an additional 90-day extension, applications reached around 8,800 cases of those eligible."

During a 2013 interview with NPR's Michel Martin, Leonel Mateo — then political counselor for the embassy — defended the citizenship policy and denied any racial motivations. "I think it's unfair to say that this ruling was based on any racism. If you go to the Dominican Republic, you can see that Haitians and Dominicans interact on a daily basis."

Mateo also denied any government plans of expelling Dominican-born Haitians. "There won't be any mass deportations. And the president of the Dominican Republic gave his word publicly about this." In their statement, the Dominican embassy also stressed that "no deportations will or have taken place while the national regularization plan is in process." 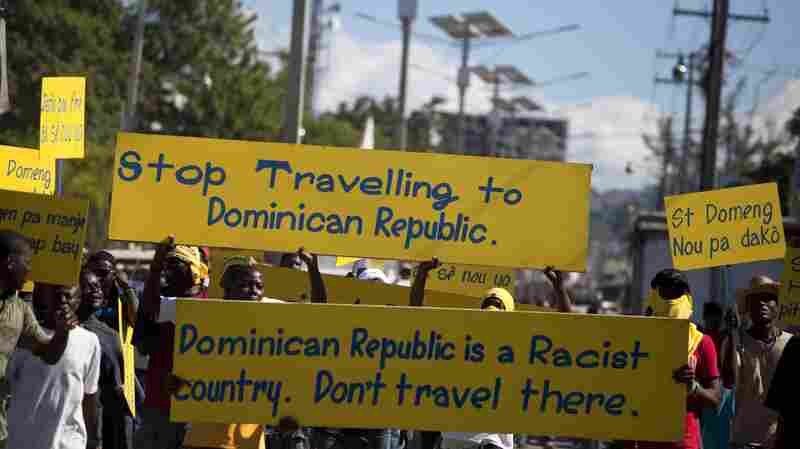 Opponents of the Dominican Republic's citizenship policy have called on the international community to boycott the country's tourism industry to send the message that discrimination is unacceptable. Dieu Nalio Chery/AP hide caption 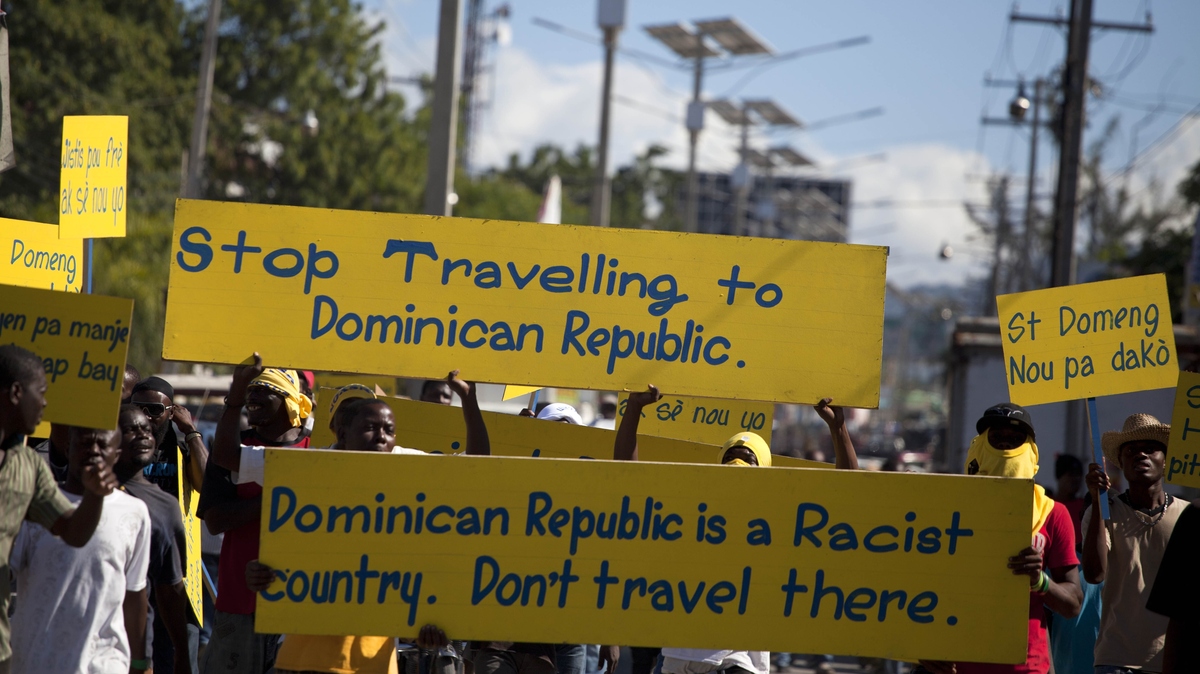 Opponents of the Dominican Republic's citizenship policy have called on the international community to boycott the country's tourism industry to send the message that discrimination is unacceptable.

Evangelista says that is not the case. She points out reports of mass deportations that have already occurred and says activists have faced threats of deportation from the government. Additionally, several Dominican journalists have reported receiving death threats for covering the country's denationalization efforts.

"Such actions inspire fear and distrust in a population that is already extremely vulnerable, and do not indicate at all that the government is acting in good faith," Evangelista says.

Deportation is not the only problem undocumented residents face. "Being stateless in your own homeland, you have no access to documentation. You have no identity," Liguori says. "It prohibits finding a job, getting married. You need a birth certificate or identity card and the Dominican Republic stripping these people of legal recognition prevents them from obtaining these documents."

Fernandez says the Dominican government's attempt to allow individuals to gain back their own nationality is futile. To her, the Dominican Republic already sent a clear message to its own people.

"Imagine what someone who was born there goes through when their nationality is stripped from them. When you feel alienated from your own society, how do you justify participating in it? The damage has been done."

According to the Dominican embassy's statement, a deadline extension means that Dominicans without proof of their birth or the birth of their parents in the country now have until June 15 to register with the government's National Regularization Plan.