Accessibility links
Malcolm X's Public Speaking Power : Code Switch On the 50th anniversary of Malcolm X's assassination, commentator Gwen Thompkins wants his skill as a public speaker and debater to be remembered as a key part of his legacy. 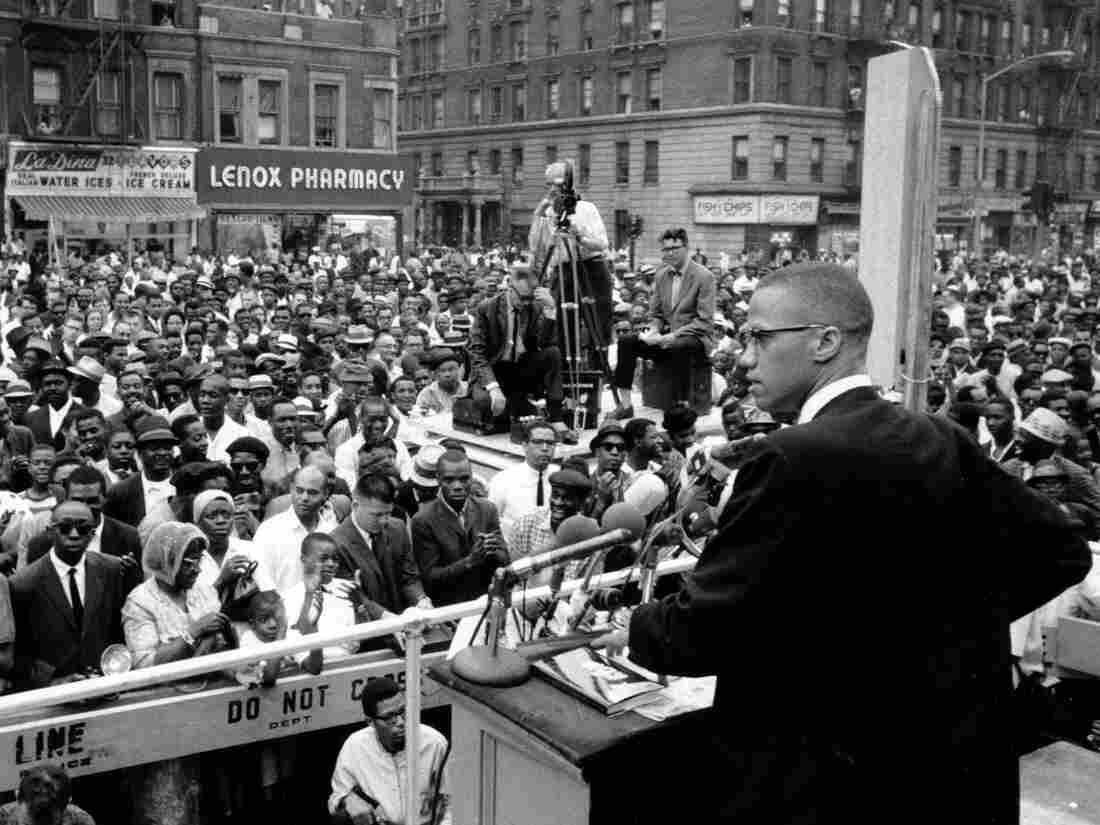 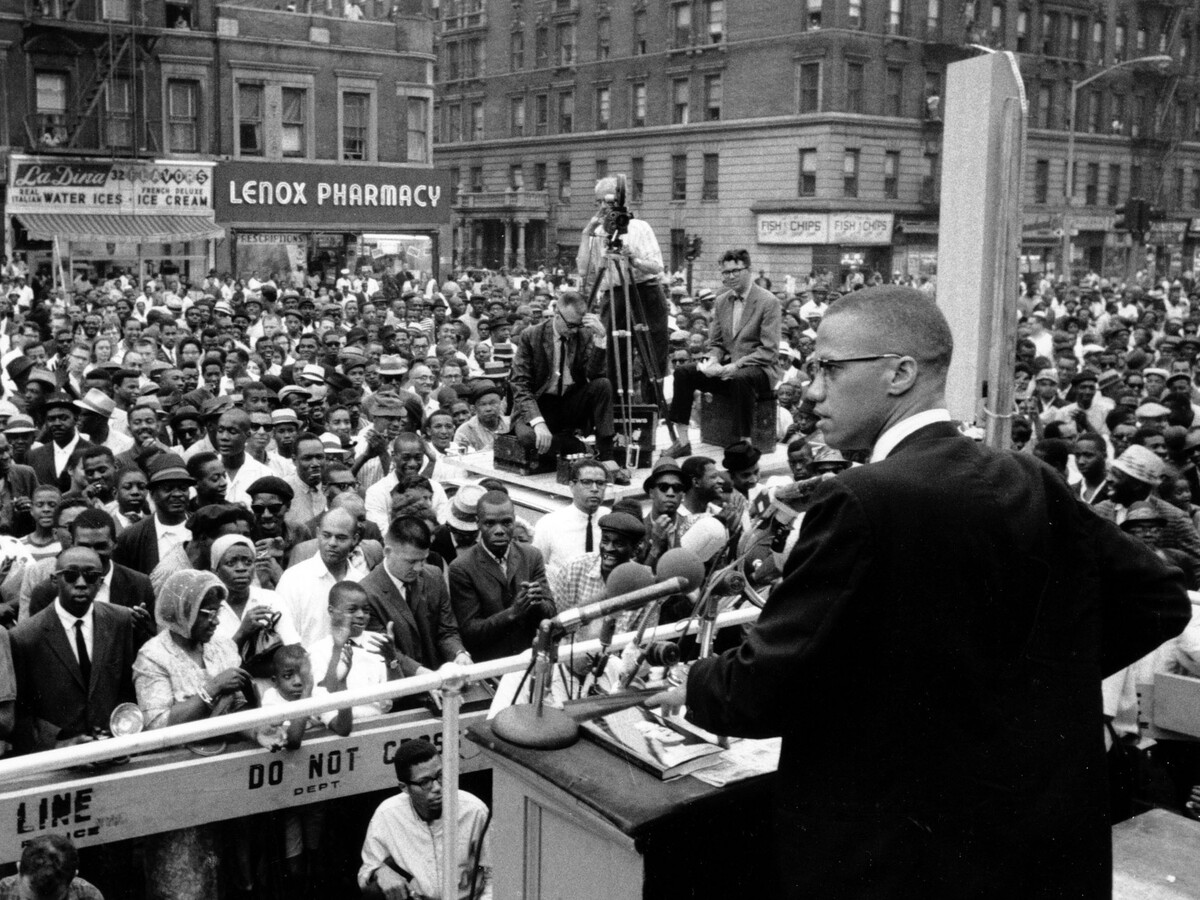 From what people remember, he fell like a tree. Malcolm X — all 6 feet, 4 inches of him — had taken a shotgun blast to the chest and a grouping of smaller-caliber bullets to the torso while onstage at the Audubon Ballroom in Washington Heights on Feb. 21, 1965. After a ghastly moment of stasis, he careened backward. His head hit the floor with a crack.

A detail that witnesses often omit, in part because it seems more of an afterthought given the circumstances, is that Malcolm X never got to say what he'd gone to the Audubon Ballroom to say.

He'd arrived, by all accounts, grumpy — critical, irritable, hectoring. The week before, his Long Island home had been firebombed. The Nation of Islam, which owned the house, promptly evicted him from the cinders and, way down in the winter of 1965, his family was homeless. What's more, Malcolm X, like the mythical Cassandra, sensed that death was near. He believed that his former brothers in the Nation were plotting to kill him. In the meantime, Malcolm X's nascent organizations, called Muslim Mosque Incorporated and the Organization of Afro-American Unity, were too young to survive without him. And to add a rancid cherry to this rotten parfait, his guest speaker at the Audubon Ballroom had canceled.

The best part of Malcolm X's day was probably going to be that speech. He was one of the all-time great public speakers. And while Malcolm X may have had a natural leaning toward dramatic interpretation, for him public speaking was a learned skill. At the age of 21, he was a middle school dropout and prison inmate who, "didn't know a verb from a house." Three months shy of his 40th birthday, he was an international media presence, a voracious reader, tough debater (Howitzer-like) and a leading proponent of black nationalism.

One of the many compelling features of The Autobiography of Malcolm X as told to Alex Haley is that he doesn't make public speaking look easy. That's because public speaking isn't easy. And after nearly 50 years of debate over Malcolm X's political views, religious convictions, racial attitudes, gender biases and historical accuracy, this seems a good time to praise his autobiography for its tutorial on oratory.

With a mix of self-deprecating humor, straight talk and withering criticism of, well, everyone — Malcolm X conveys that public speech should not be attempted until the speaker has something to say. It's a fundamental truth that many of us forget. Oratory is born of knowledge and as Malcolm X says, "You couldn't have gotten me out of books with a wedge." When books were scarce, he provided his own reportage — speaking authoritatively about how African-Americans and people of color worldwide were faring based on his own travels and observations. The multitude of books on those topics came well after his trips to the Middle East, Africa and Europe.

Malcolm X debates at London's Oxford Union at Oxford University in 1964, defending the proposition that "extremism in the defense of liberty is no vice."

Haley writes that Malcolm X often resisted overstating his professional achievements. But in the autobiography, our hero comes close to boasting about his talent for debate. "I have always loved verbal battle, and challenge," Malcolm X says. The reader can almost imagine him licking his lips. He revels in past skirmishes. But the reader also can count on Malcolm X to admit when he was on the ropes. He says of one opponent, "He got me so mad, I couldn't see straight."

Often, Malcolm X kept a mean-spirited remark in his back pocket, some emergency kryptonite of a personal nature that he could use to crush an opponent in the eyes of the audience. Biographer Manning Marable describes a Malcolm X who wasn't above loud-capping his opponents, insulting them, or undermining their authority based on whom they married, befriended or quoted. Otherwise, his manners were impeccable.

But Malcolm X also enjoyed a fair fight. His 1963 debate with friend James Baldwin is a good example. Based solely on the audio, Baldwin won. But on videotape, Malcolm X's intensity and wit steal the show. As he says in the autobiography, "Anyone who has ever heard me on radio or television programs knows that my technique is non-stop, until what I want to get said is said."

In his 1963 book, The Negro Protest, Kenneth Clark, a psychology professor and public television interviewer, made this criticism of Malcolm X's technique: "One certainly does not get the impression of spontaneity. On the contrary, one has the feeling that Minister Malcolm has anticipated every question and is prepared with the appropriate answer." To Clark's way of thinking, Malcolm X had stumbled into a pitfall of oratory. He was perhaps too studied at times — his responses impassioned, but rote.

The only sure way to exit the ghetto of predictability in public speaking is a seismic change in worldview, which is something that Malcolm X reportedly experienced. A 1964 pilgrimage to Mecca seemed to change his fundamental understanding of race relations, religion and the world at large. As a result, opinions that were once fixed, became more nuanced, surprising his closest allies.

Near the end of his autobiography, Malcolm X admonishes his readers to be more flexible, saying, "Children have a lesson adults should learn, to not be ashamed of failing, but to get up and try again. Most of us adults are so afraid, so cautious, so 'safe' and therefore so shrinking and rigid ... that it is why so many humans fail."

Had Malcolm X lived to make his remarks at the Audubon Ballroom, there's no telling what he might have said. Haley writes that he'd decided to talk about the need for black people to stop fighting one another, an idea that fit within his growing allegiance to both black nationalism and Pan-Africanism.

Given the acrimony between Malcolm X and his adversaries, however, the death threats, the fire bombing, the eviction and the irreparable break from the Nation of Islam, a peace-loving speech might have flopped. But the 400 people in the audience (save the assassins) were there because they were curious to hear what Malcolm had to say. That number included his wife and their four little girls, who as daughter Atallah Shabazz later said had started the day excited, "to get dressed and go see Daddy."

Which brings us to the ultimate lesson of public speaking: The speaker is never as important as the audience. It's for the benefit of the audience that the speaker labors to make his or her ideas known. Malcolm X died in midday, in mid-life, and perhaps most importantly, in mid-sentence. His killers robbed the audience of the ideas it had come to hear. Fortunately, the autobiography fills in some of what went missing. The last lines are powerful:

"And if I can die having brought any light, having exposed any meaningful truth that will help to destroy the racist cancer that is malignant in the body of America — then all of the credit is due to Allah. Only the mistakes have been mine."