Accessibility links
Spic-O-Rama: Where 'Spic' Comes From, And Where It's Going : Code Switch From the Panama Canal to 90s Latino pride movements, "spic" has a complicated past. 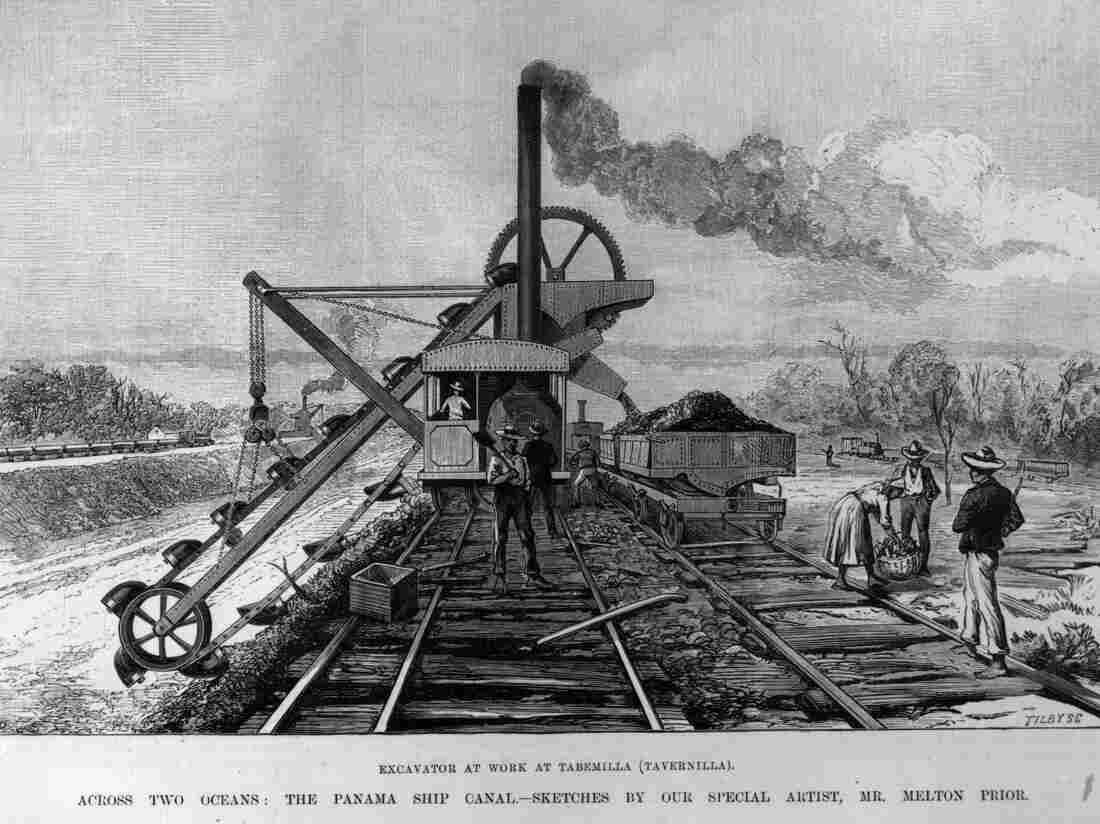 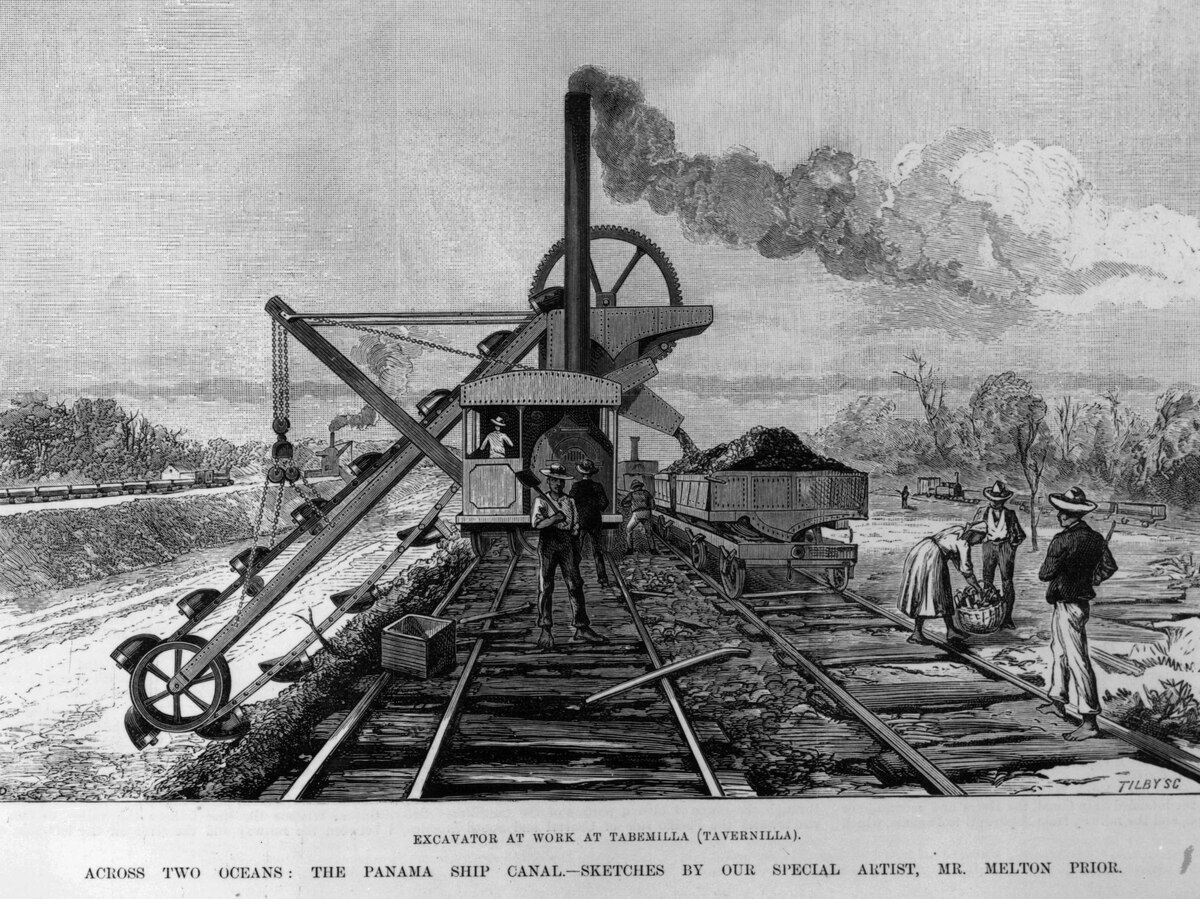 Construction of the Panama Canal

Editor's note: This post is about the evolution of a word that is highly offensive to some and includes other offensive language.

If, unlike me, you've never had cause to become familiar with the term "spic," you can see it in action in the story of a veteran Boston police officer who allegedly called his Uber driver a "fucking spic" and beat him up for going to the wrong address.

Or I could tell you about an afternoon in Miami some 20 years ago, when a crusty old white man called a crew of preteen misfits hanging around outside the convenience store "little spics" as he shuffled past. We bit a little harder on our cigarettes, but said nothing back.

Spic has long been a weapon of degradation, nestled in the same ungodly arsenal as "nigger" and "chink." There are different versions of its etymological origin story. In 1908, the Saturday Evening Post sent a reporter to Panama to write about the thousands of North American laborers digging out the canal. He kept hearing the word "spiggoty," which he learned the northerners had taken to calling Panamanians:

All Americans are alike. They do not bother to learn foreign languages when they go to a foreign country, but they force the natives to learn American. So, when the Panamanians presented themselves, if they could talk English, they prefaced their attempts to cheat the Americans out of something—it really made little difference what—with the statement, accompanied by eloquent gestures: 'Spik d' English.' If they couldn't they said: 'No spik d' English.' One or the other was the universal opening of conversation, and those early Americans soon classed the whole race of men who could or could not 'Spik d' Eng.' as 'Spikities,' and from that grew the harmonious and descriptive Spigotty.'

By 1913, spigotty appears to have shrunk to just spig, as found in the travelog of an author who took a job as a policeman in the Canal Zone, which he called "the land of the panameños, technically known on the Zone as 'Spigoties,' and familiarly, with a tinge of despite, as 'Spigs.' 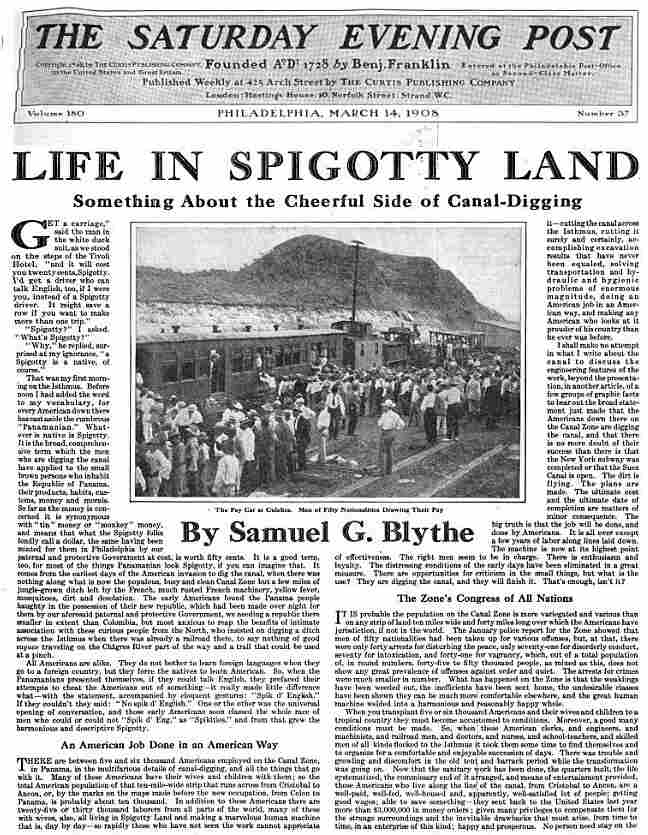 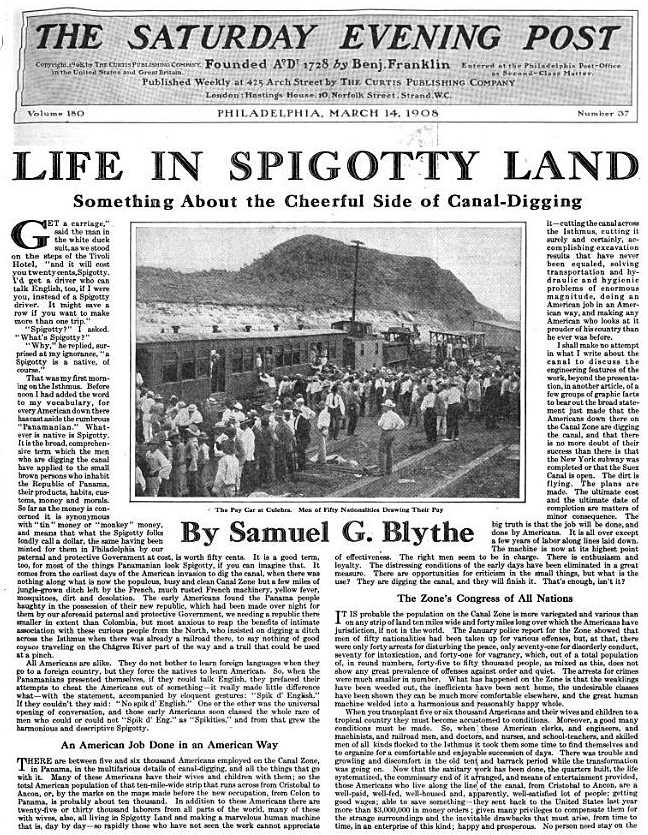 The word traveled north, and was in use along parts of the U.S.-Mexican border by 1916, when a writer for Scribner's magazine heard border troopers at Fort Bliss, just north of El Paso, use "spicks" as a derogatory term for Mexican men.

While most accounts have spic directed at people of Central and South American descent, Italians and Italian-Americans have been targets at times, too. In F. Scott Fitzgerald's Tender is The Night, a Yale man erupts with jealousy over his mistress's friendship with an actor from Rome ("He's a spic!"). And some claim "spiggoty" is a mushy version of spaghetti, though there's little to back this up.

Another theory is that spic is short for Hispanic, but the term "Hispanic" wasn't commonly used in the U.S. until the mid-1970s, when the Census Bureau made it an option for one's racial identification for the first time. Spic shows up in newspapers and books well before then, ruling out "Hispanic" as the origin.

While there are a few possible explanations for where spic came from, it's clearly tried on a few different identities along the way. And by the second half of the 20th-century, spic was not done evolving.

Fast forward to the early 1990s and something interesting starts to happen. Driven in part by the growing influence of hip-hop culture, a wave of Latino pride movements swept the United States. In his book La Nueva California: Latinos in the Golden State, David Hayes-Bautista writes that the Latino generation of the 90s was far less content with enduring oppression silently like those in the deportation-era, a time of "Latino invisibility," when they were "a small minority and lacked political representation or public voice." The young Latinos of the 90s, however, were beginning to "galvanize pride" in their heritage, and in part, that meant reclaiming negative slurs.

Performers and artists started messing with spic in their work, like Tony Touch and Doo Wop ("Doo Wop, spic half Cubano"), Mexican artist SANER (formerly known as SPIC), and numerous poets including Martin Espada—who Sandra Cisneros called "the Pablo Neruda of North American authors." Music and films gave it a fresh nuance, and for many spic came to represent a sense of pride in being other. In time, some decided it now meant Spanish People In Control.

The poet Emanuel Xavier says it's about empowerment. "Look at everything we have done and accomplished," he told Poetry Foundation. "It is a play on the word. We are speaking out our truths and identities in very perfect English."

By the time I was a middle schooler in the mid-90s, spic had become a badge of honor. Finally my friends and I had a way to clap back, a chant of our own to sing out in the hallways between class.

In 1992, comedian and actor John Leguizamo wrote and starred in "Spic-O-Rama"—a one-man show where he portrays all six characters of a dysfunctional Jackson Heights family. In the play's opening, 9-year-old Miggy remembers the time he was called a stupid, ugly spic by a boy at summer camp. "I could have beat him up so bad," Miggy says." Because when you're angry, oh, my God, you could just beat up people who are a million zillion trillion times your size."

Through braces and an overbite, Miggy tells us he welcomed the assault on his character. "Yes, yes, yes, I am a spic," he says proudly. "I'm, I'm spictacular. I'm, I'm spictorious. I'm indespicable."

Last year, Mental Floss published an interesting list of 15 words that don't mean what they used to. Among them is bully, which used to mean "superb" or "wonderful." Words grow out of their old clothes over time. But who we are and where we come from stays the same. It's like Miggy said: Latinos must always own who they are. And commit to making our whole lives "nothing less than a Spic-O-Rama."

Edited, and with additional research, by Tasneem Raja.