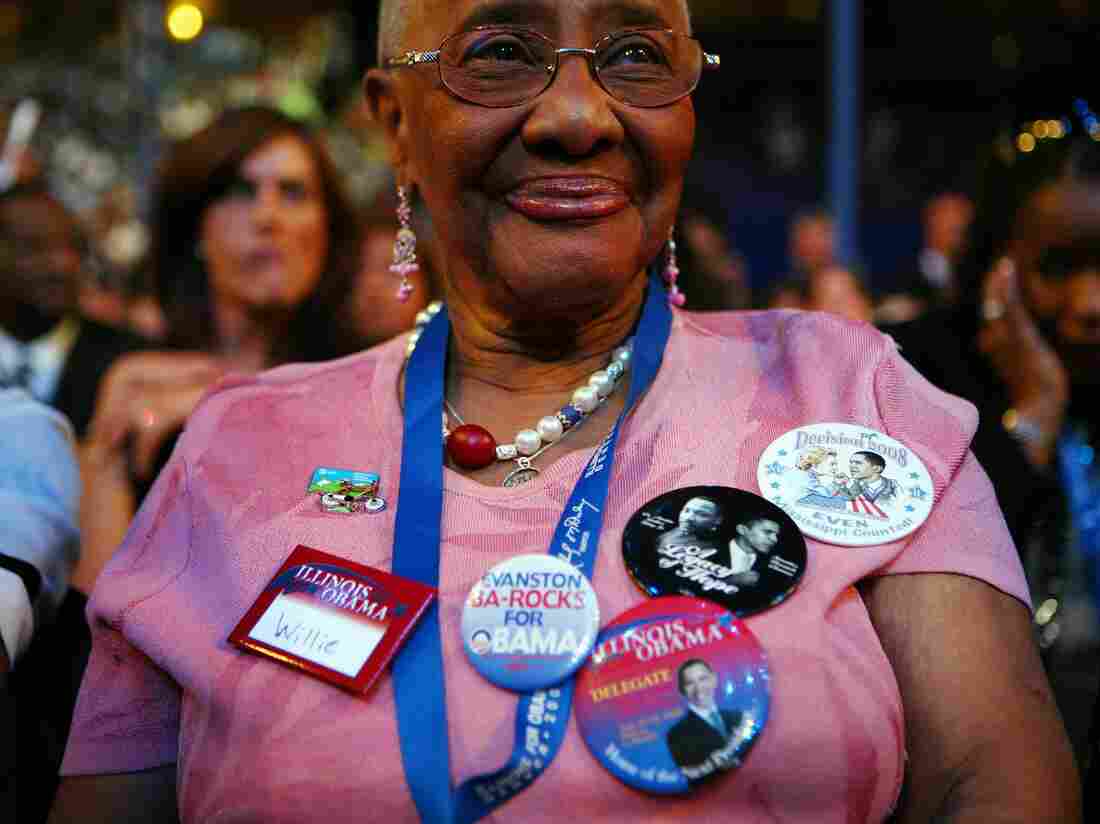 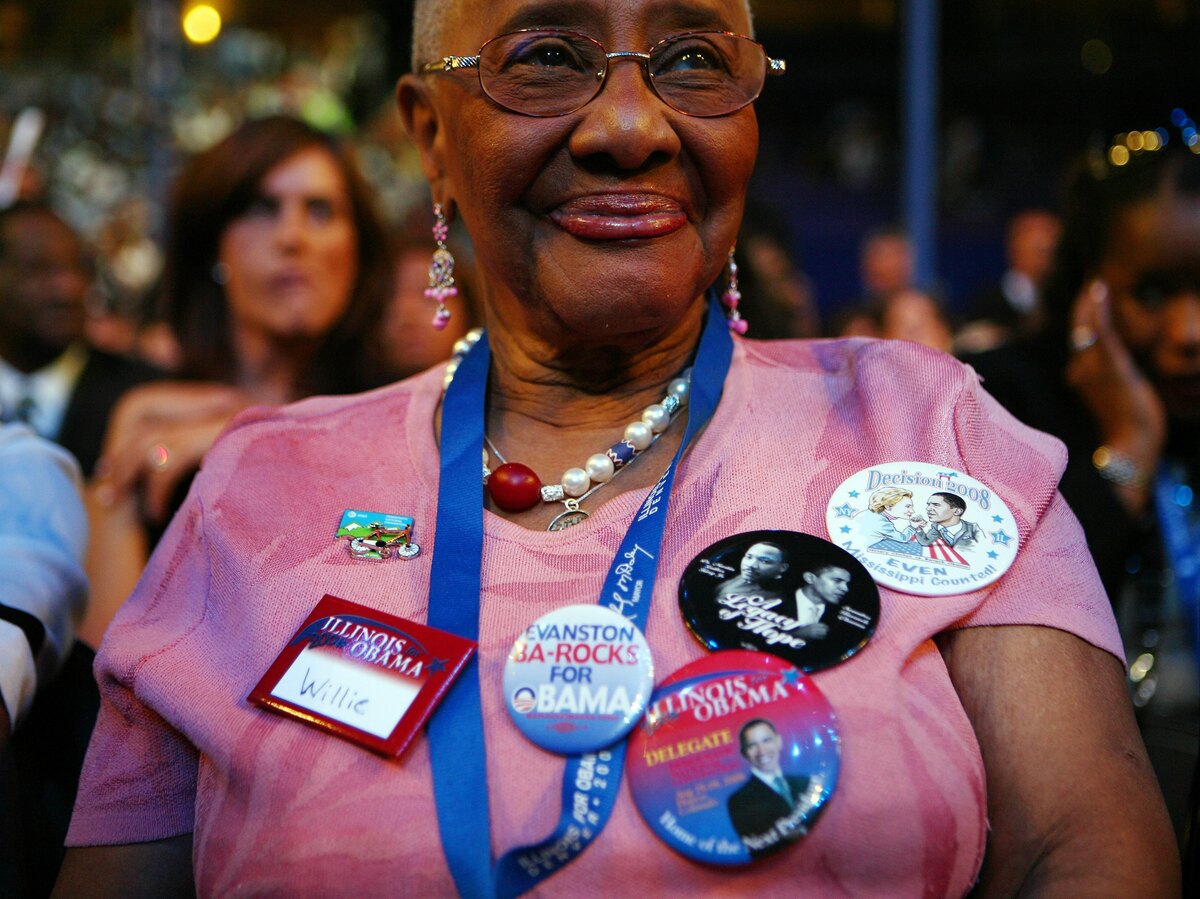 Rev. Willie Barrow, a 'superdelegate,' attending the opening night of the 2008 Democratic National Convention. The long-time activist, who was a mentor to President Obama, died on Thursday.

Rev. Willie T. Barrow, a long-time Chicago activist and mentor to black political leaders — including Rev. Jesse Jackson and President Barack Obama — has died. She was 90 years old, and had been hospitalized recently for a blood clot in her lungs. Barrow was fondly called "The Little Warrior" by many who knew her well, because of her leadership prowess and her willingness to marshal her political forces when the need arose.

Although she was pixie-sized — all of 4 feet 11 inches — Rev. Barrow was considered a giant figure in Chicago politics. She, with Rev. Jackson, was a co-founder of Operation Breadbasket, which became the Rainbow-PUSH Coalition. Barrow was also a tireless community organizer, and an astute assessor of political talent.

Feisty At An Early Age

Born in Burton, Texas, in 1924, Willie Taplin was one of seven children. She learned how to farm with her family, and she proudly told people that — as a child — she knew how to "pick cotton, plant sweet potatoes, and pull corn — and was happy to do it."

As a 12-year-old, young Willie loved school, but she hated the long walk to get there, especially when a half-empty school bus trundled by every day as she and her friends were trudging toward school. One day, she'd had enough. "My feet were tired," Rev. Burton recalled in a tribute film made when she was bestowed a prestigious civil rights award in 2012.

A video tribute to Rev. Willie T. Barrow, in honor of her winning the 2012 Bill Berry Civil Rights Award from the Chicago Urban League.

The petite girl marched onto the bus with her black classmates, and demanded that they ride. "I said 'We all alike — we've all got butts, and all we got to do is just sit down on the seat. And you got plenty of room — so why you want me to get off, just cause I'm black? Nooo, we got to change that.'"

The black students rode the bus from then on. And Willie Taplin had found her calling: she was going to fight injustice wherever she found it.

Not Shy In Chi-town

She did that at 16 when she moved to Portland, Ore., to work in a local shipyard as a welder, and later as a union organizer. She married Claude Barrow in Portland, and they moved to Chicago in the mid-1940s. In short order, her organizing skills were put to use not only in that city, but throughout the U.S. Rev. Barrow marched in Selma with Rev. Martin Luther King, and was one of the civil rights leaders who urged him to bring his fight for racial justice to the North, to Chicago.

When Jackson became a presidential candidate in 1984, she was a supporter, organizer and strategist who would not allow herself to be muscled aside by the mostly-male entourage. Like Shirley Chisholm, she would not be ignored or denied. In addition for fighting for civil rights, she fought for women's rights, and later, for gay rights. She became an early contributor to the AIDS Memorial Quilt when she stitched a panel in honor of her son Keith, who died in 1983.

The Little Warrior continued her battles for social justice at home, but she also traveled the globe on missions of peace. The little girl who demanded equity in Barrow, Texas, eventually made her way to Cuba, Vietnam, Russia and Nicaragua. And was in South Africa the day Nelson Mandela walked out of his prison on Robben Island. There is a photo of her with Mandala, beaming, in her living room. It's one of many photos of Rev. Barrow with power figures — Mayor Harold Washington, Rev. King, Andrew Young, Rosa Parks and Oprah Winfrey.

In pride of place in her home is a signed photo of Barack and Michelle Obama and their daughters. In a statement the White House released shortly after being notified of Barrow's death, the president declared "To Michelle and me, she was a constant inspiration, a lifelong mentor and a very dear friend. I was proud to be among the more than 100 men and women she called her 'Godchildren,' and worked hard to live up to her example. I still do."

Chicago Mayor Rahm Emanuel has ordered the flags at City Hall to be flown at half-mast to honor Rev. Barrow. Funeral services are scheduled for next week. She left strict instructions for her Friday evening service at Vernon Park Church of God. "Still ordering people around," her pastor, Rev. Jerald January said.