Accessibility links
School Was Closed, But This Baltimore Dad Had An Amazing Lesson For His Son : Code Switch "I want him to look at these photos one day and say, 'I was part of history and my dad shared it with me.' "

School Was Closed, But This Baltimore Dad Had An Amazing Lesson For His Son

School Was Closed, But This Baltimore Dad Had An Amazing Lesson For His Son 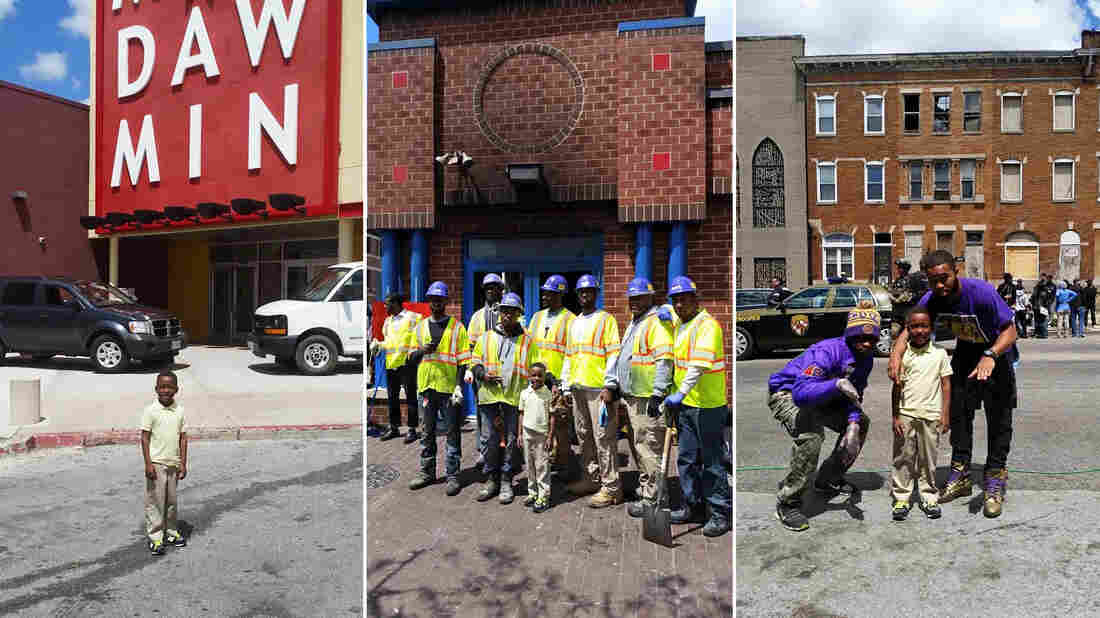 Father and son take a tour of Baltimore after schools were closed on Tuesday. Courtesy of Edward Buck Jr. hide caption 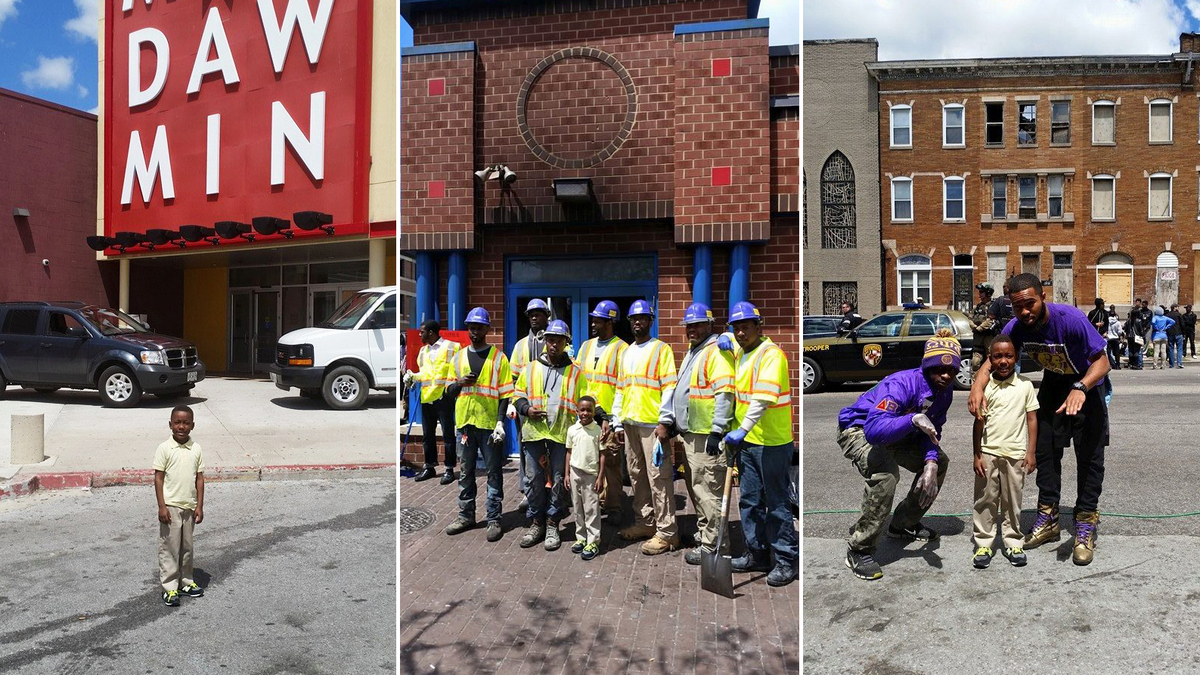 Father and son take a tour of Baltimore after schools were closed on Tuesday.

When Edward Buck Jr. learned that Baltimore schools were shutting down Tuesday, he decided to spend the day giving his 5-year-old son, who's also named Edward, a tour of West Baltimore.

"I wanted to be the one painting the picture of what was happening in our neighborhood," he explains.

They started shortly after noon, driving over to the Mondawmin Mall, the scene of angry protesters, smashed windows and looted stores Monday night. They pulled into the parking lot, where a group of people stood in a circle praying, with several police officers keeping a watchful eye off to the side.

Buck Jr. got his son out of the car and they started walking over. "I wanted Edward to meet the officers and maybe take a picture with them," he says, and explain to him that "there are good police officers; all the police officers aren't bad." The officers didn't want to pose for a picture, but Buck Jr. says they did greet little Edward and shake his hand. 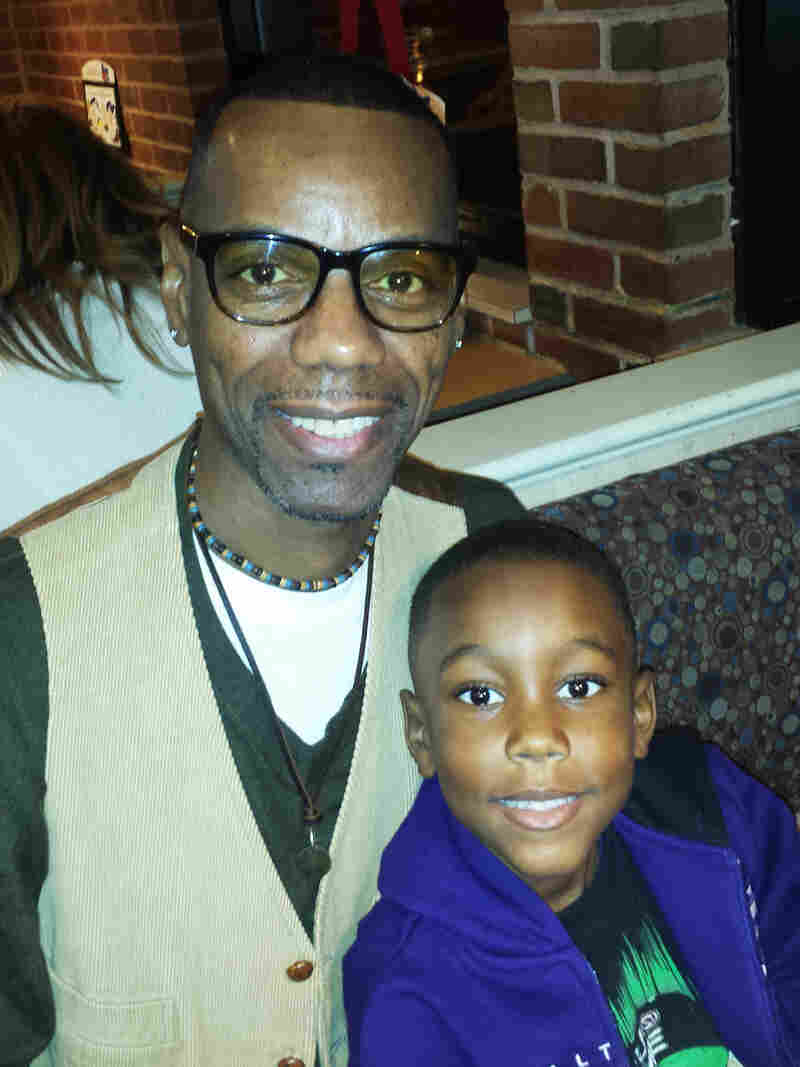 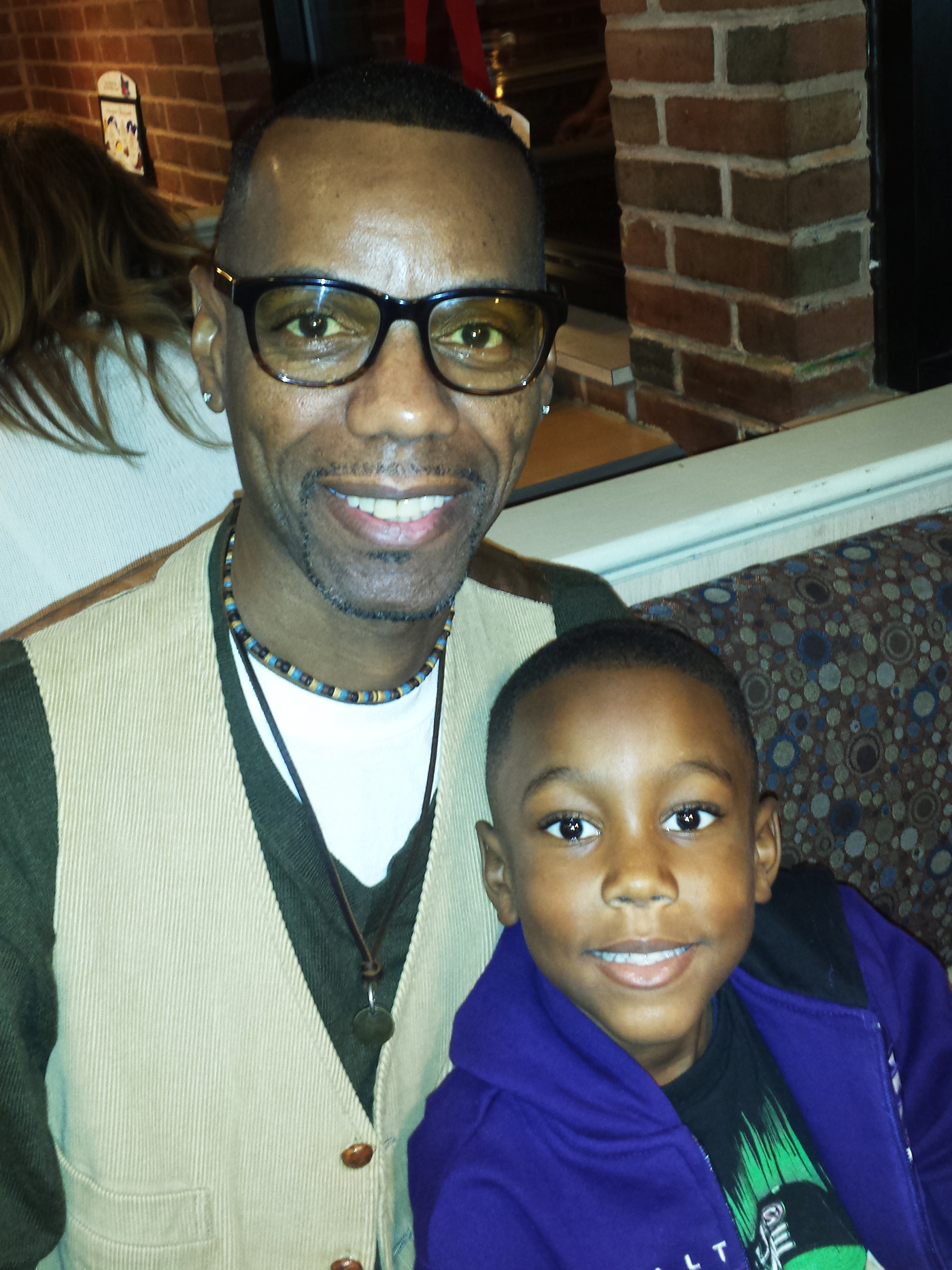 Father and son got back in the car and drove toward Pennsylvania and North Avenues, the epicenter of protests, looting and burning the previous night. As they got close, they started hearing church groups singing gospel songs from the sidewalk. "There were so many people; it looked like we were at a concert," said Buck Jr.

They parked and walked over to a row of media vans, where a bunch of reporters were milling around. Before them stood the CVS building, where charred windows and soot stains marked the looting and burning from the night before.

"I'm hurting right now," said little Edward. Dad asked why. "Because they broke my favorite store," he replied. The family goes to this CVS a lot, to buy gum and candy and to get their prescriptions filled. Buck Jr. promised his son that the store will be rebuilt.

By now, it was nearly 2 p.m. and Buck Jr. was scrambling. He needed to get to work — he's a project manager at a security management firm in Baltimore — and needed a safe place to park his son.

"I really didn't know exactly what to do," he says, "but then I remembered that Penn North was always available."

"I want him to look at these photos one day and say, 'I was part of history and my dad shared it with me.' "

Penn North Community Resource Center is in the heart of Sandtown, one of Baltimore's poorest neighborhoods. It's where Freddie Gray grew up. In fact, after his funeral, about 200 mourners, including his family, went there for a meal. Edward's stepmom, Ericka Alston, runs marketing and business development at the center, and the whole family has spent a lot of time there.

At one point on the way over, Buck Jr. and Edward pulled into a side street to let dozens of members of the Baltimore-based anti-violence group 300 Men March go by. Within minutes, father and son arrived at the historic Frederick Douglass High School building, where Thurgood Marshall and Cab Calloway went to school and where Penn North is housed.

On the school playground, a handful of little kids played on the swing sets. Young men played basketball across the street. Helicopters hovered overhead. Yet more protesters were marching down the street, chanting, "Justice for Freddie Gray."

Blaize Connelly-Duggan, Penn North's executive director, says he knew the school closures would hit working parents hard, so the center set up a makeshift day care. "This is a resilient community," Connelly-Duggan says. "It's actually quite a beautiful thing to witness the grace and the grit with which people deal with whatever is going on in their lives."

Inside the center, community members were glued to the television watching President Obama reflect on the events of the past few days. It was a surreal experience for Buck Jr. "They were watching the president talk about an event that had happened just around the corner," he says. He let his son know that he needed to head to work, and little Edward seemed excited to get to play on the playground and color in coloring books for a while.

Around 6 o'clock in the evening, Dad was back to pick up his son. As they crossed the parking lot to head home, a big group of young people in bandannas and baseball caps walked up. 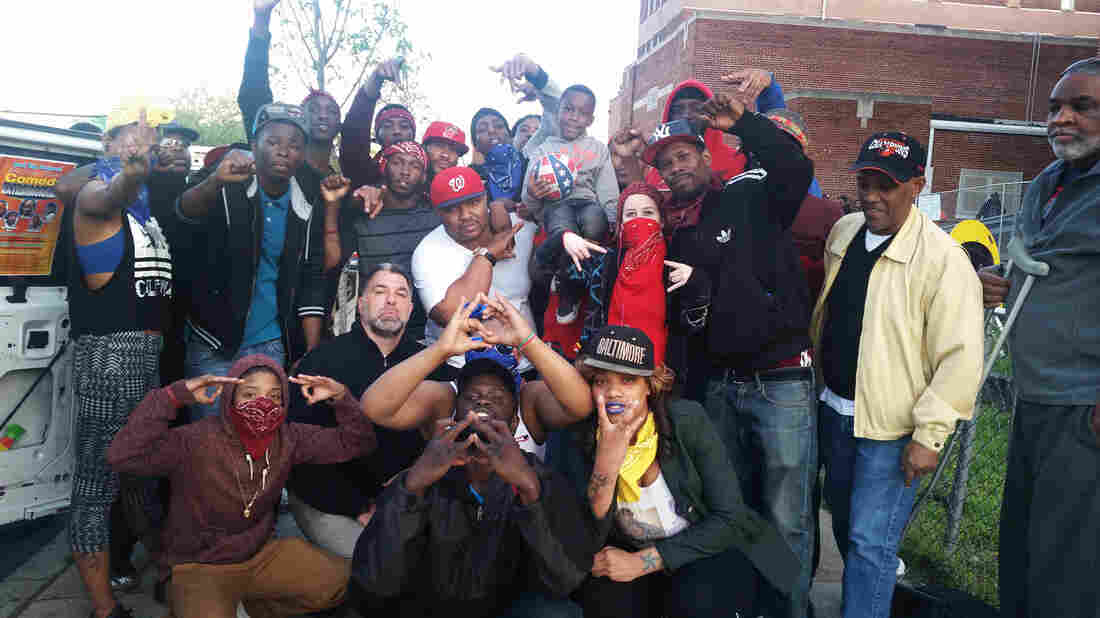 "I was kind of scared," Buck Jr. says, "so in an awkward moment I said, 'Can you take a photo with my son?' " The young people said sure, they were happy to. Courtesy of Edward Buck Jr. hide caption 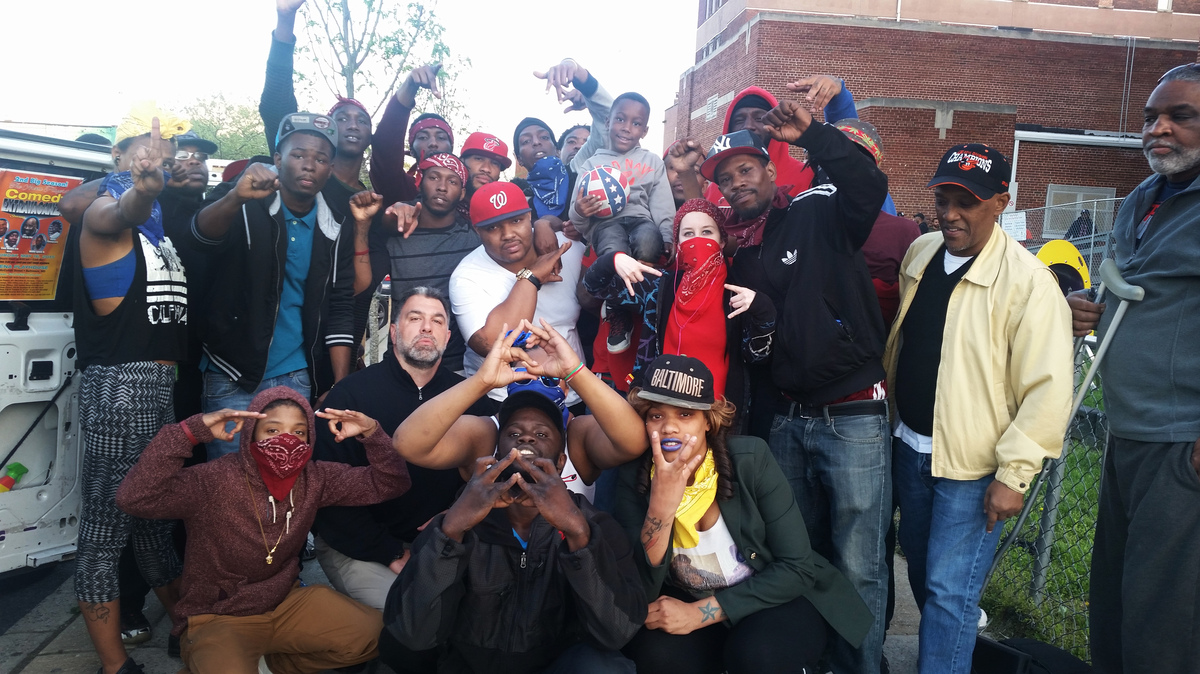 "I was kind of scared," Buck Jr. says, "so in an awkward moment I said, 'Can you take a photo with my son?' " The young people said sure, they were happy to.

"I was kind of scared," Buck Jr. says, "so in an awkward moment I said, 'Can you take a photo with my son?' " The young people said sure, they were happy to. The whole group sat together for a photo with little Edward practically on their shoulders.

"It kinda touched my spirit," Buck Jr. says. "There's good in these young men and women, and I was able to experience that just for a moment with my son."

Sunset was approaching, and it was time to go home. Things started going "back to basics," as Buck Jr. put it. They stopped at Popeye's for chicken strips and corn on the cob, and then it was time for bed. Dad isn't sure how much Edward will end up remembering of this day, but that's OK. "I want him to look at these photos one day and say, 'I was part of history, and my dad shared it with me.' "