Accessibility links
Beyond The Headlines, There's Much More To West Baltimore : Code Switch At one intersection this week, violence was thoroughly documented. But the cameras missed the treasured public library that for years has educated and entertained the neighborhood's kids.

Beyond The Headlines, There's Much More To West Baltimore

Beyond The Headlines, There's Much More To West Baltimore 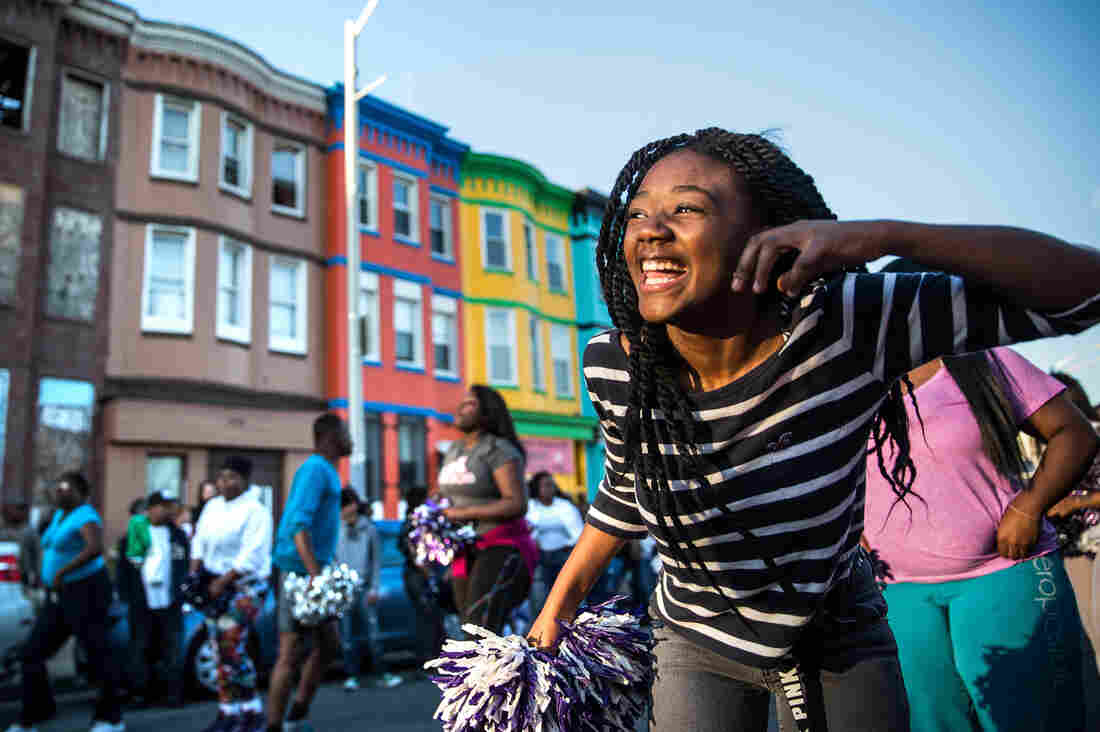 A girl dances to the beat of a drum line during a peaceful protest near the CVS pharmacy that was burned to the ground on Monday in Baltimore, Md. Andrew Burton/Getty Images hide caption 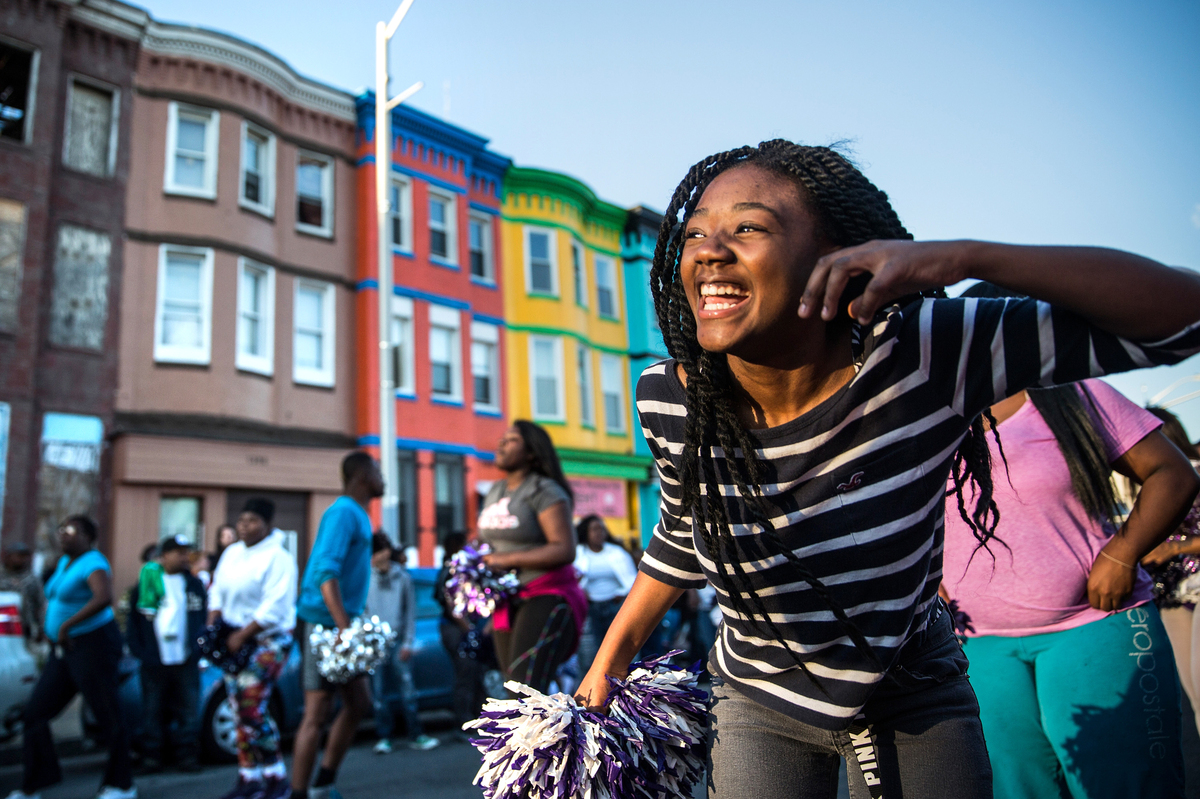 A girl dances to the beat of a drum line during a peaceful protest near the CVS pharmacy that was burned to the ground on Monday in Baltimore, Md.

The complexities of Baltimore seem largely out of the reach of the media outlets that descend, as usual, only when certain neighborhoods burn.

Birthday parties and backyard barbecues – rituals of daily life and love – seem to never make the headlines. Yet images of overturned cars claim the top spot on the evening news every time.

In West Baltimore, at Pennsylvania and North avenues, media featured a drug store on fire.

But that intersection is also the location of the Enoch Pratt Free Library branch, where, as a 3-year-old, I accompanied my mother to get my first library card. I spent countless hours there, reading and dreaming about the world beyond our modest row house on Dolphin Street.

Though the library's website says it offers services that were not around when I used to haunt the place – computers and Internet access, for example – the children's reading area probably has not changed very much. And its meeting room for community groups might be needed now more than ever.

I left the neighborhood. But memories of life there – the many lessons, good and bad, learned while growing-up – never went away. That's why it broke my heart to see the fires on television.

On the day of his funeral, Freddie Gray's family was also heartbroken to see their day of mourning tarnished by unrest.

Yes, there is no excuse. But let's break this down for a bit:

Every story about misbehaving police officers – from Cleveland to New York City, and now to my own hometown – is required to contain some form of the following disclaimer: Most police are, of course, good, righteous and law-abiding. It's just a few bad apples.

Yet the opposite sentiment is seldom expressed when criminals disrupt the peaceful protest of thousands. It takes just one or two of these bad apples to change the narrative for everyone. Demonstrators are often swept into the same labels as violent thugs and opportunistic looters. Generally overlooked this week were the many Baltimore protesters who placed themselves in the middle as peacemakers. This is after Gray's twin sister pleaded, "Please stop the violence." 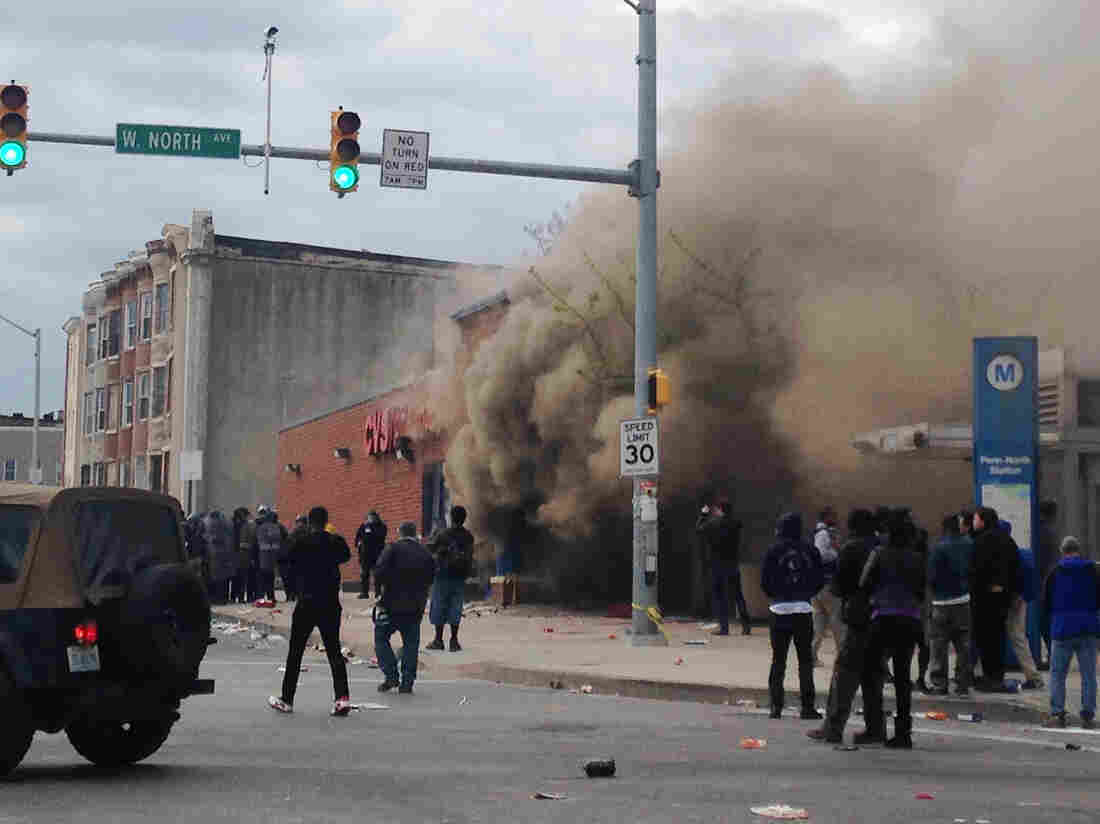 Smoke billows from a CVS Pharmacy store in Baltimore, where demonstrators clashed with police after the funeral of Freddie Gray. Gray died from spinal injuries after he was arrested and transported in a Baltimore Police Department van. Juliet Linderman/AP hide caption 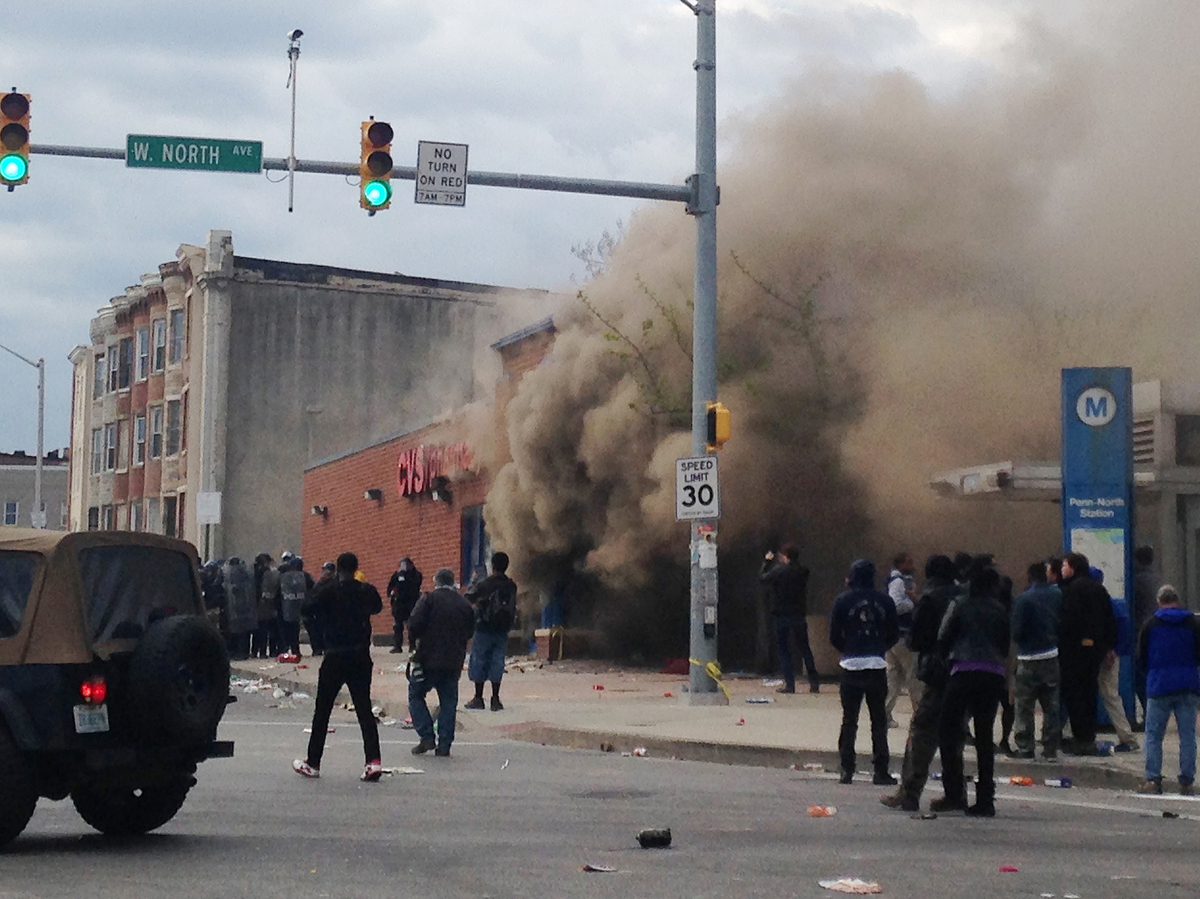 Smoke billows from a CVS Pharmacy store in Baltimore, where demonstrators clashed with police after the funeral of Freddie Gray. Gray died from spinal injuries after he was arrested and transported in a Baltimore Police Department van.

"Violence and justice never go together in the same sentence," the Rev. Jamal Bryant, who delivered Gray's eulogy, said on NBC's Today show. During the worst of the unrest, ministers linked arms and walked through the streets, singing. Residents showed up first thing Tuesday, armed with brooms and trash cans. And, when schools closed, community centers opened their doors.

Is every person – protester or police officer – an individual, or subject to definition by group identity? It depends on who is judging. And, in the game of who gets the benefit of the doubt, police officers, the ones with badges and guns, are overwhelmingly on the winning side.

This despite what appears now as almost routine and contradictory video evidence, as in the Walter Scott killing in North Charleston, S.C.

This, even after a Baltimore Sun report last September revealed that the city paid $5.7 million since 2011 over lawsuits claiming brutality against a roster of people, including an 87-year-old grandmother and a 26-year-old pregnant woman.

And everyone condemns a "don't snitch" mentality for inner city witnesses of crime. But isn't that twisted mindset the same as the "good cops" who dare not cross the thin blue line when they see colleagues break the law?

I see and hear comments from people once sympathetic to the Freddie Grays and Walter Scotts that they are now weary of the news. They are comfortable giving police officers permission to act with impunity and without accountability – as long as it isn't in their own neighborhoods, I presume.

So, all black people are responsible for the misdeeds of any and every black person and must suffer the consequences. Yet bad police officers act on their own.

The West Baltimore of my childhood changed after the 1960s and '70s. Many folks who could move out, did so. I am far from nostalgic about the neighborhood's past. It wasn't considered a particularly great place back then. It was black and working-class with projects around the corner from my block. Our family did OK, but some neighbors were truly poor. The oldest son in a large family two doors down escaped by joining the military. He returned to West Baltimore from Vietnam in a casket months later; I've run my fingers over his name on the memorial wall in Washington. 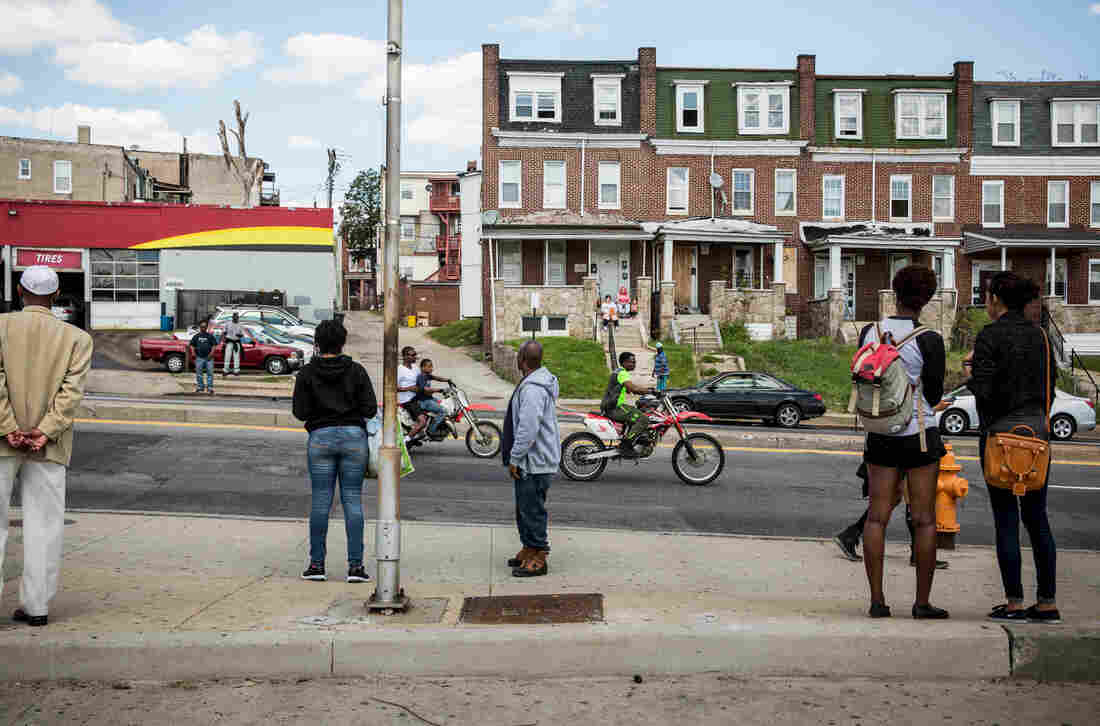 People wait for the bus at the Mondawmin Station on Thursday in Baltimore. Andrew Burton/Getty Images hide caption 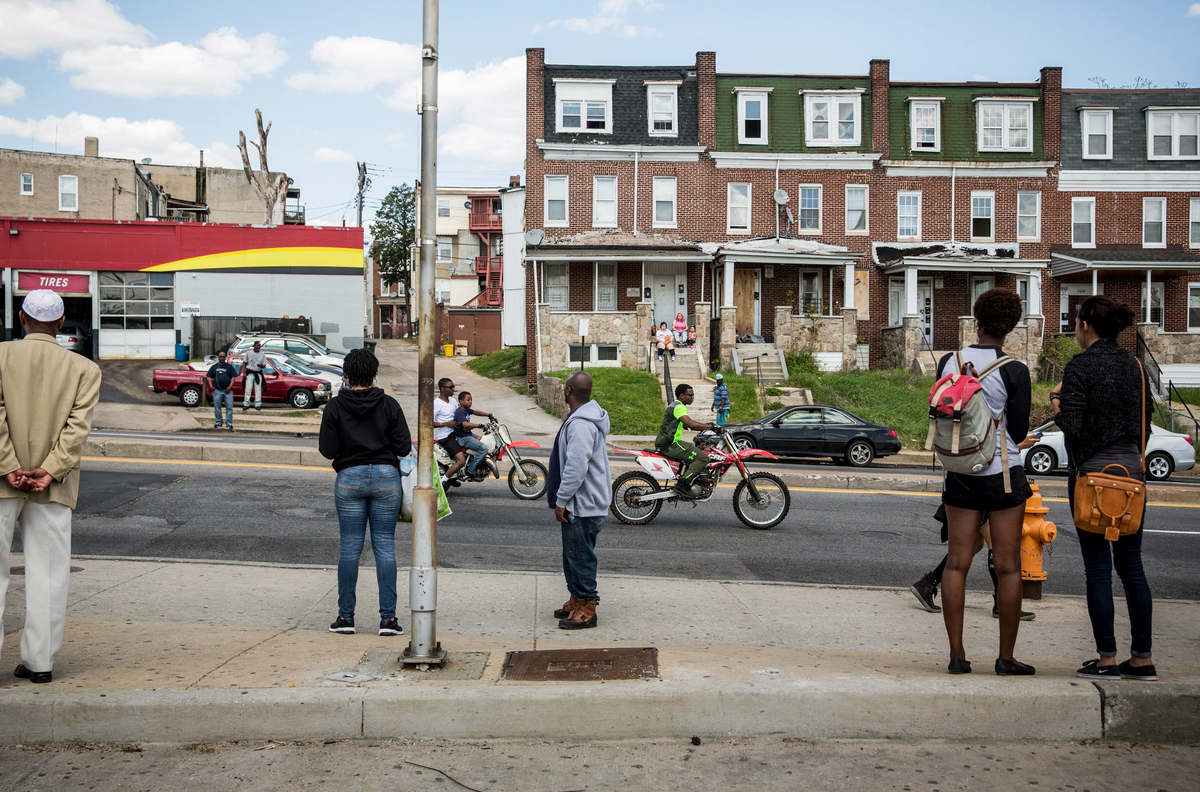 People wait for the bus at the Mondawmin Station on Thursday in Baltimore.

Baltimore was once a cruelly segregated city: A local dance show did not allow "race mixing" (see Hairspray for a fanciful re-creation). Protesters once ringed a downtown department store that welcomed black shoppers' money but refused to hire any to work behind its glass counters. And, my brother was arrested twice by the police – not for stealing or drugs, but for sit-ins, taking a seat at diners and asking to be served. African Americans could only live certain places, and though that time is over, vestiges remain. You can see that in boarded up houses. The neglect is clear in the neighborhoods that reinvestment and job opportunity forgot.

Then and now – and I do visit relatives on occasion – West Baltimore had more than its share of hard-working folks with the same hopes and dreams for their children and loved ones as the top tenth of the 1 percent. Most people without fat bank accounts work hard. Sometimes, like my dad, they work hard in a lot of jobs.

My parents lived there all their lives. My father worked at Carver Vocational-Technical, the same high school Gray attended. My mother was a teacher. Her warm kitchen was respite for her five children and their friends – of every color. Today, my niece and her husband are Baltimore City teachers.

When I moved into neighborhoods considered "good" and with a higher income index, it didn't mean the end of trouble behind the lovely doors. There was domestic violence, and kids in rehab. Of course, most of the children living in those houses weren't detained for being where police imagined they didn't belong. They didn't attract attention for making "eye contact," as Freddie Gray did. He was deemed suspicious for looking like he belonged in a bad neighborhood, just as he might be stopped for looking like he didn't belong in a nice one.

Protesters everywhere own a right to denounce violence against the police – as they have in Baltimore – and to rail against the violence directed at those deemed suspicious without cause. Peaceful protesters in Baltimore insisted they were not anti-police, but pro-good policing. They support anyone who is pledged to serve and protect. But that doesn't mean they should tolerate routinely being treated as perps.

Mary C. Curtis is a journalist in Charlotte, N.C. She has worked at the New York Times, the Baltimore Sun, the Charlotte Observer, as a national correspondent for Politics Daily and was a contributor to The Washington Post. Follow her on Twitter.