It was after the bars had closed and well into the pre-dawn hours of an August morning in 1966 when San Francisco cops were in Gene Compton's cafeteria again. They were arresting drag queens, trans women and gay hustlers who had been sitting for hours, eating and gossiping and coming down from their highs with the help of 60-cent cups of coffee.

The 24-hour eatery was a local favorite. It was centrally located — adjacent to the hair salon, the corner bar and the bathhouse — and provided a well-lit and comfortable haven for trans women performing in clubs or walking the streets in San Francisco's Tenderloin neighborhood.

From Compton's "you could walk to Woolworth's to buy [fake] eyelashes, and it was two blocks from the airline bus terminal," where Tamara Ching says many drag queens and trans women would go to change from male to female clothes. Ching is an Asian-American transgender woman who grew up in San Francisco. She frequented the Tenderloin during the 1960s and has lived there since 1992. "Everybody that lived in the Tenderloin ate at Compton's," Amanda St. Jaymes, a transgender woman who ran a residential hotel nearby, said in a documentary, Screaming Queens, which chronicles a confrontation with police that marked the start of a movement toward LGBT rights.

Compton's management didn't want the cafeteria to be a popular late-night hangout for drag queens, trans women and hustlers. Workers would often call the police at night to clear the place out. The Tenderloin, where sex work, gambling, and drug use were commonplace, was one of only a few neighborhoods where trans women and drag queens could live openly. Yet they were still regularly subject to police harassment and arrested for the crime of "female impersonation." 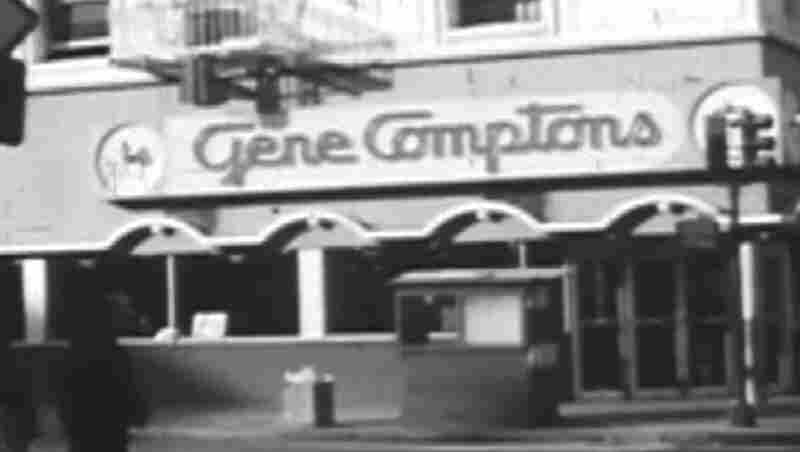 A view of Gene Compton's cafeteria In San Francisco's Tenderloin District. In 1966, the eatery was the site of landmark confrontations between police and transgender activists. Courtesy of Screaming Queens/Frameline hide caption 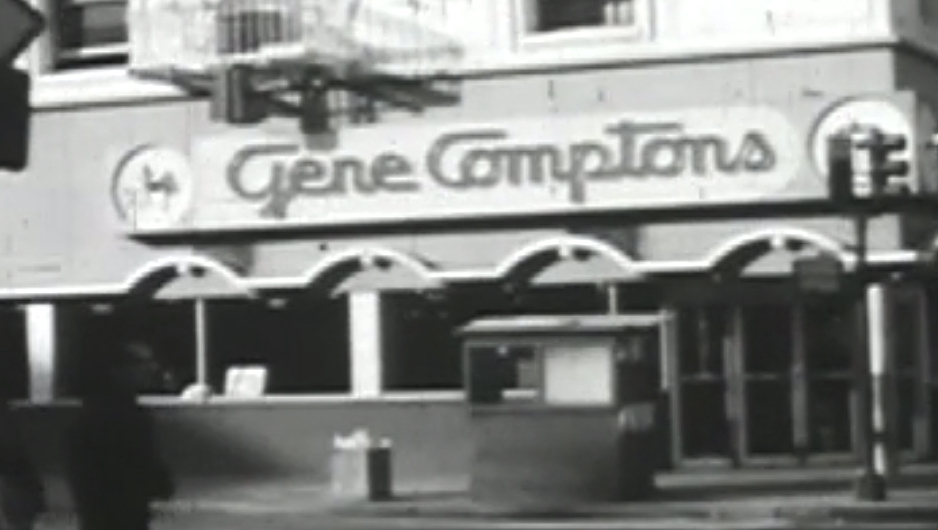 A view of Gene Compton's cafeteria In San Francisco's Tenderloin District. In 1966, the eatery was the site of landmark confrontations between police and transgender activists.

And when a policeman in Compton's grabbed a drag queen, she threw a cup of coffee in his face. The cafeteria "erupted," according to Susan Stryker, a historian who directed Screaming Queens. People flipped tables and threw cutlery. Sugar shakers crashed through the restaurant's windows and doors. Drag queens swung their heavy purses at officers. Outside on the street, dozens of people fought back as police forced them into paddy wagons. The crowd trashed a cop car and set a newsstand on fire.

If the famous Stonewall riots in New York City were the origin of this nation's gay rights movement, the Tenderloin upheaval three years before was "the transgender community's debut on the stage of American political history," according to Stryker. "It was the first known instance of collective militant queer resistance to police harassment in United States history."

Stonewall is often thought of as an uprising of gay men. In reality, "it was drag queens, Black drag queens, who fought the police at the famous Stonewall Inn rebellion in 1969," wrote lesbian novelist and playwright Sarah Schulman in a 1985 novel. "Years later, a group of nouveau-respectable gays tried to construct a memorial to Stonewall in the park across from the old bar. The piece consisted of two white clone-like thin gay men and two white, young lesbians with perfect noses. They were made of a plaster-like substance, pasty and white as the people who paid for it."

While the legacy of Stonewall was whitewashed, the rage and resistance of the San Francisco group went largely unremarked — even among each other.

"We didn't think this was a big deal," Ching told me. "It was a natural thing for people to do back then, to protest."

Besides memories of police and patrons who were there that night, the only record of the riot that survived into the present is a short article by gay activist Raymond Broshears. He wrote it for the program of the first San Francisco gay pride parade, in 1972. Decades later, Stryker found his account and began to seek out the whole story. Her search for people who had been in the Tenderloin back then who spent time at Compton's or took part in the riot led her to Ching, St. Jaymes and another trans woman named Felicia Elizondo. 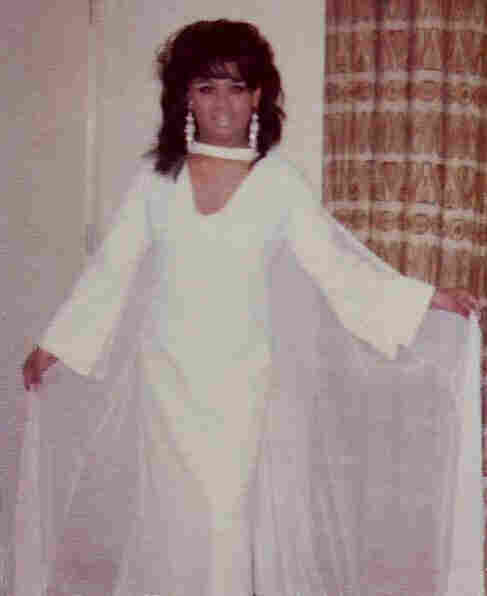 Ching grew up in San Francisco. She recalls hanging out with beatniks on Grant Avenue and began doing sex work as a teenager, in 1965. "My mom was an alcoholic and she let me run the streets and do my own thing."

Ching wasn't at the riot that night, but she knew Compton's well. "It was good to go and be seen and talk to people about what happened during the night. To make sure everybody's OK, everyone made their coins, everybody's coming down off drugs and didn't overdose, and that you didn't go to jail that night," she said.

"Compton's nourished people. People would sit there for days drinking a cup of coffee. I would buy a full meal. I don't cook and I loved eating at Compton's — it was like downtown."

The Tenderloin in the 1960s was a red light district and a residential ghetto. Stryker told me that the neighborhood was a particular destination and home to "young people who maybe had been kicked out by their families and were living on the street. And trans people who could lose a job at any moment or not be hired, who wouldn't be rented to, who had to live in crappy residential hotels in a bad part of town, and who had to do survival sex work to support themselves."

Whether for survival, pleasure or some combination of both, sex work left women vulnerable to violence and put them in closer contact with police. But even those who weren't hustling had frequent encounters with law enforcement. St. Jaymes, who ran the residential hotel, told Stryker she was arrested frequently, even though she wasn't a sex worker. "If we had lipstick on, if we had mascara on, if our hair was too long, we had to put it under a cap. If the buttons was on the wrong side, like a blouse, they would take you to jail because they felt it was female impersonation."

"The police could harass you at any time," Ching told me. "They would ask you for pieces of ID. You had to have your male ID if you were born male and didn't go through a sex change. They would pat you down, and while they're patting you down, of course they're feeling you up," she continued. "They would arrest you and put you in the big van, Big Bertha, and drive you around town. When they turned a corner they turned sharply, so people would fall. They'd go over a bump, fast down the hill and make you look a mess by the time you got to the booking station."

Police relations with the trans, drag and gay communities in the Tenderloin reached a boiling point in 1966. Across San Francisco resistance was in the air. Local anti-war protests were gaining momentum. Civil rights activists and religious leaders at a Tenderloin church organized to bring government anti-poverty resources to the neighborhood. A group of radical young queers calling themselves Vanguard started pushing back against discrimination by police and business owners. After Compton's management started kicking them out of the restaurant, they picketed outside on July 18, 1966. Viewed in the context of 1960s activism, identity politics and anti-poverty efforts, the riots that occurred a few weeks later seem inevitable.

Though it can take decades to understand motivations for a particular riot or movement of militant resistance in the streets, there are plenty of instances when a group's anger and frustration over injustice is later celebrated as a civil rights victory. We have a parade every year to commemorate the Stonewall riots — three nights when rioters burned down a bar and tried to overturn a paddy wagon. Now that Bruce Jenner has told Diane Sawyer, "I'm a woman," and Oprah interviewed Janet Mock, we can look at a charge like "female impersonation" and see the Compton's riot as another act of resistance against injustice. One day, history books, pundits and academics could very well talk about the recent unrest in Baltimore or Ferguson the same way.

Right after the Compton's episode, Ching heard about what had happened. "To me, nothing was out of the ordinary," she told me. "We lived to survive day to day. We didn't realize we'd made history."

Nicole Pasulka has contributed to Mother Jones, The Believer, BuzzFeed and Vice.