Accessibility links
A Rust Belt Story Retold, Through Portraits Of The Women Who Lived It : Code Switch LaToya Ruby Frazier's photography tells the story of the black community living in the shadow of Andrew Carnegie's first steel mill through portraits of her grandmother, her mother and herself. 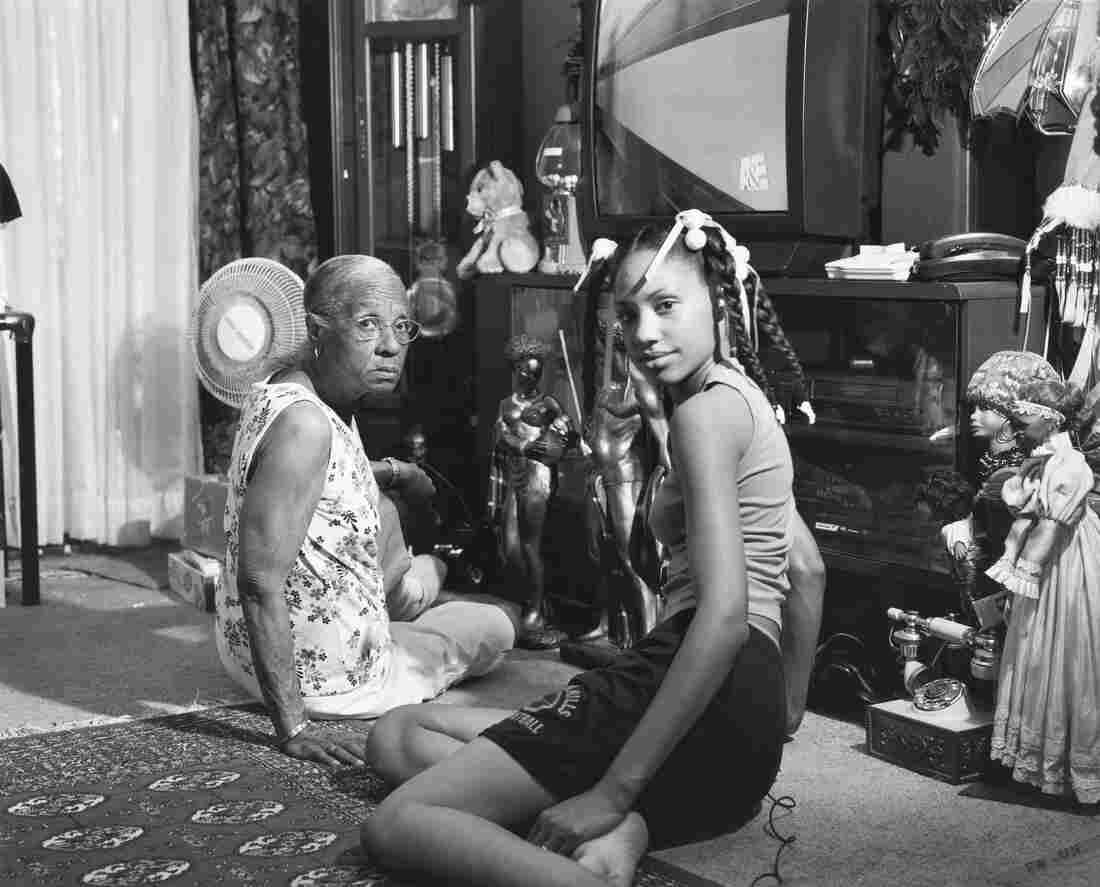 Grandma Ruby and Me, 2005, from The Notion of Family (Aperture, 2014). LaToya Ruby Frazier hide caption 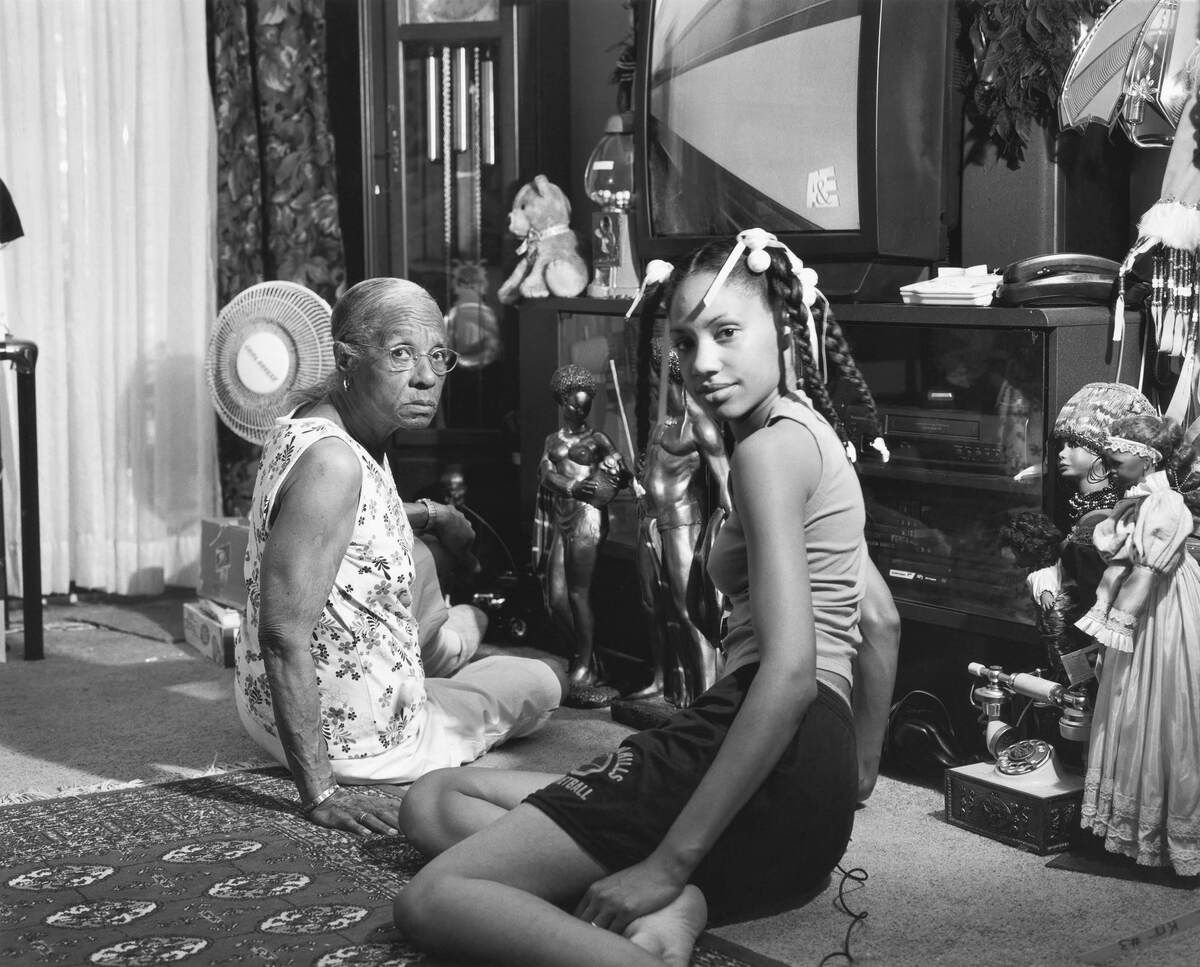 Just outside Pittsburgh is the tiny borough of Braddock, Pa., best known as the birthplace of Andrew Carnegie's first steel mill. Today, it's something of a poster child for rust belt revitalization, a place where artists can buy property for pennies and even construct outdoor pizza ovens using the bricks from abandoned or demolished buildings.

LaToya Ruby Fazier grew up in Braddock. She's a photographer who's been taking pictures of her hometown for two decades, and she says that neither of those narratives represent the Braddock she knows. Her Braddock is primarily black, primarily female and primarily poor.

"Another way to understand it is to see my grandmother as Braddock's prosperous days, my mother as the signification of white flight and segregation, and me as the 1980s and '90s during the war on drugs and the dismantling of the surrounding steel plants," says Frazier. 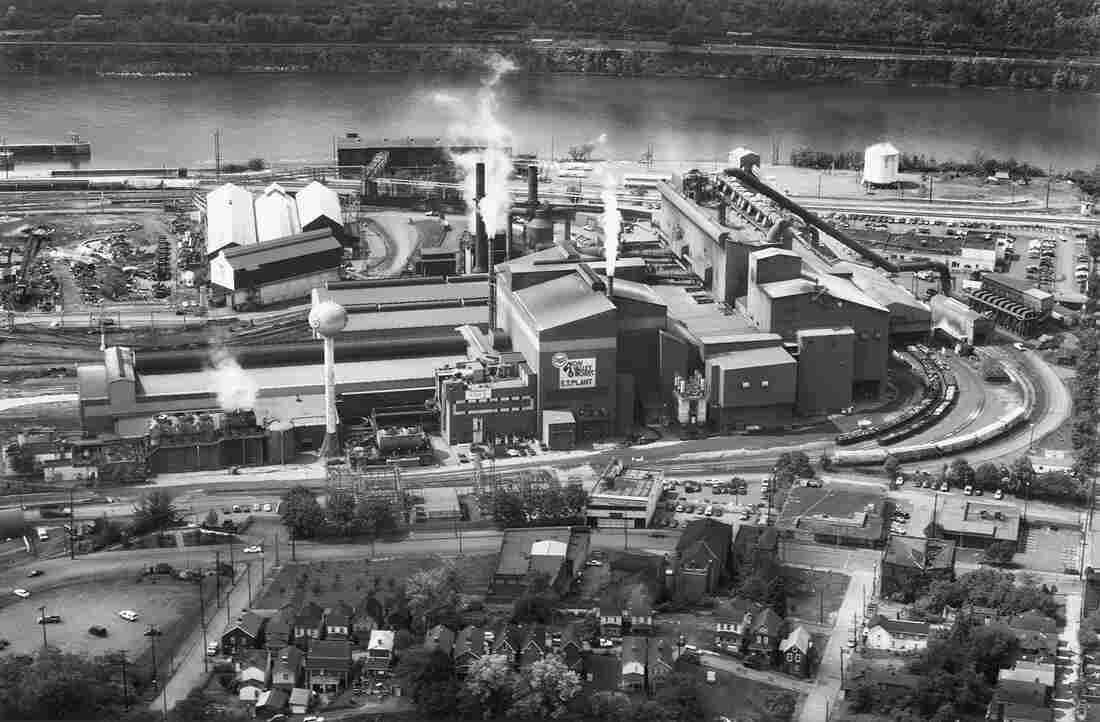 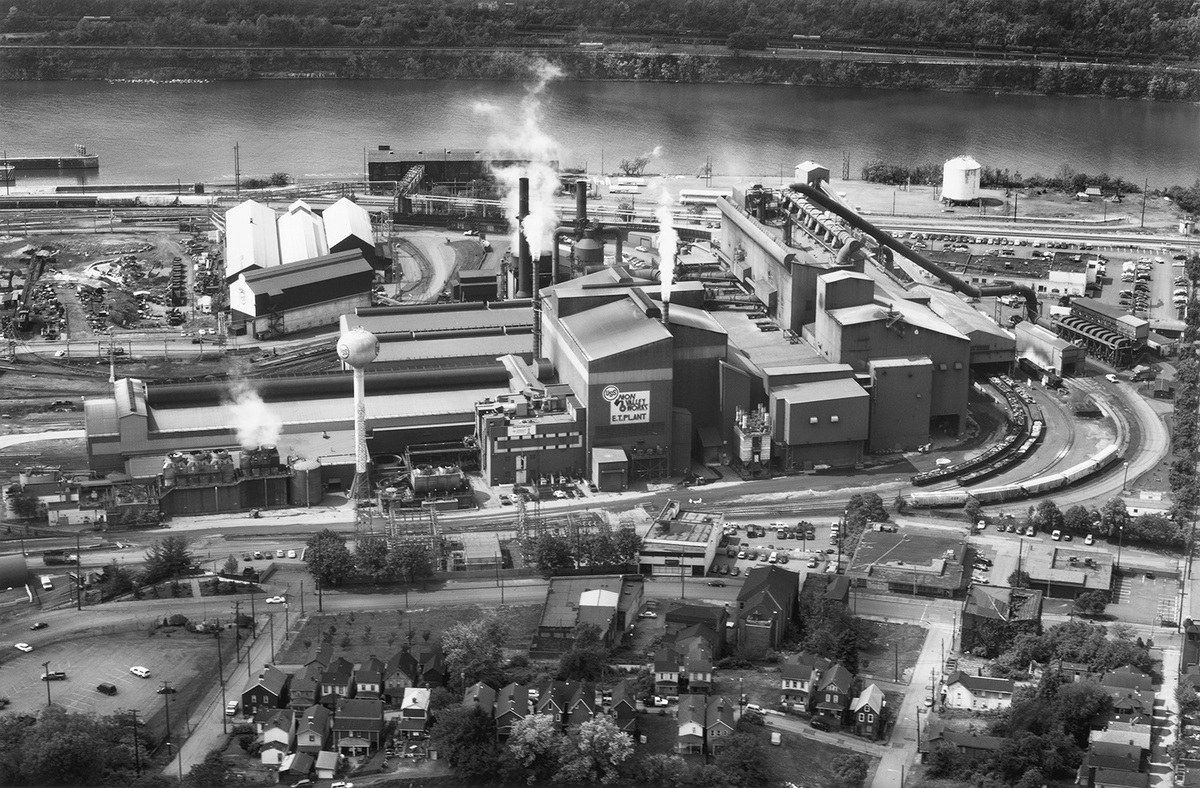 Her first book, The Notion of Family, is a history of women in Braddock, the steel industry and its collapse, and unequal health care told primarily through three women's bodies. Frazier recently received a prestigious Infinity Award for The Notion of Family from the International Center of Photography.

The work is not traditional documentary photography. It is part performance, part reality. To make the image she calls Grandma Ruby and Me (seen at the top of this post), she set up a light and her camera in the living room at the time of day when her grandmother dusted her dolls and watched her favorite TV shows. Beforehand, she had discussed making the image with her grandma.

"These things should have killed us, but we survived it."

First, Grandma Ruby braided Frazier's hair the way she did when the photographer was a little girl (she's 23 in the image). Then, "she sits on the floor and starts to rearrange her statues and her dolls, I sit next to her and we're already framed," Frazier says. "And we don't say anything. She just stops what she's doing and we both looked over our shoulders, and I happened to squeeze the cable release."

Frazier says her Grandma Ruby wanted to shield her from the poverty and violence that lurked in the shadow of Carnegie's first steel mill by dressing her up like a doll and surrounding her with them. "She was an installation artist in her own right and a woman that created this environment that was showing me, through possessions, that I wasn't poor," Frazier says.

In her book, Frazier quotes her grandmother's recollections of Braddock: "There used to be theaters, the Capital, the Paramount and the Times. There were restaurants, five-and-dime stores, children stores, furniture stores. Aww, we used to have everything." The only restaurant left when Frazier was growing up was the cafeteria in Braddock's hospital, but Grandma Ruby's home was a monument to the good life, "a firewall that blocked external forces," Frazier writes. 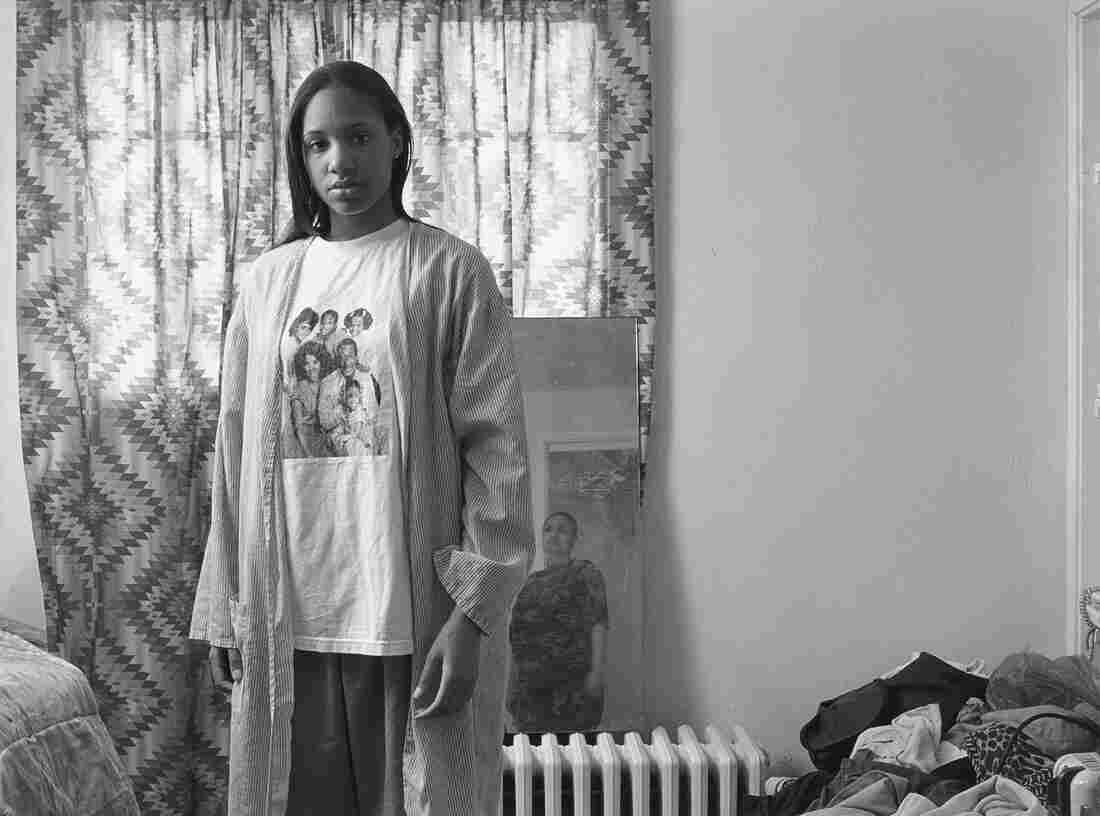 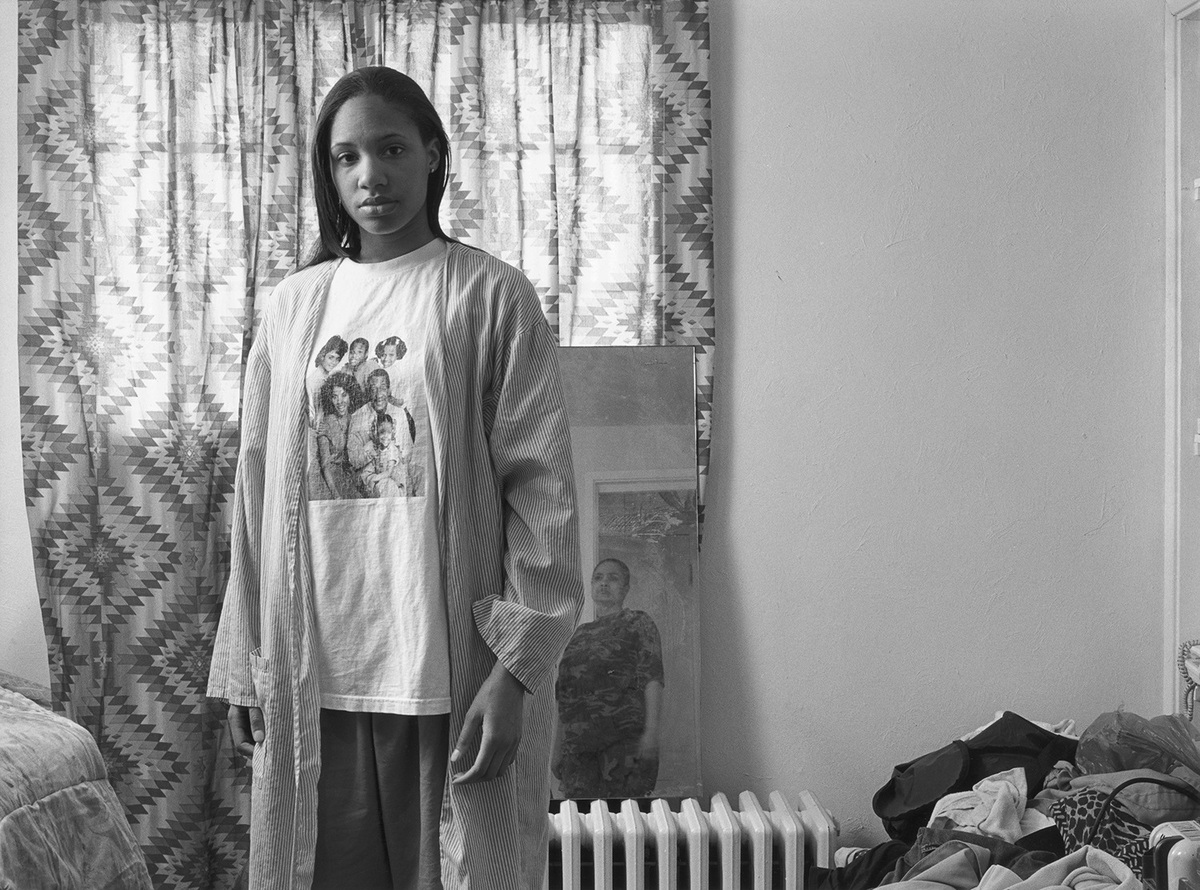 Many of the portraits are taken over the course of years when Frazier, her mother and grandmother were stuck in the house, sick. "I mean, these are really far from these pristine, methodical moments," Frazier says. "It's either we're healing or we're sick, making portraits of each other, documenting our illnesses." Frazier has lupus, her grandmother died of cancer in 2009 and her mother continues to battle cancer. She believes the constant sickness ravaging their bodies is the result of living next door and downstream from heavy industry.

Frazier also made portraits collaboratively with her mother. "I taught her how to photograph," Frazier says. "She's making the images and she's directing them." She says that handing the camera to her mom challenges that notion that disenfranchised people only pose for photos, while the elite and the university-educated get to tell their stories.

It was her mom's idea to make Huxtables, Mom and Me after Frazier told her the back story of a Cosby Show T-shirt she brought home from college over Christmas break. "A friend of mine and I had a debate about what that show meant to us, so she jokingly gave it to me," Frazier says. For her friend, the show represented a black middle-class reality. For Frazier, it was pure escapism. "That just wasn't the reality when I walked out of my front door," she says. 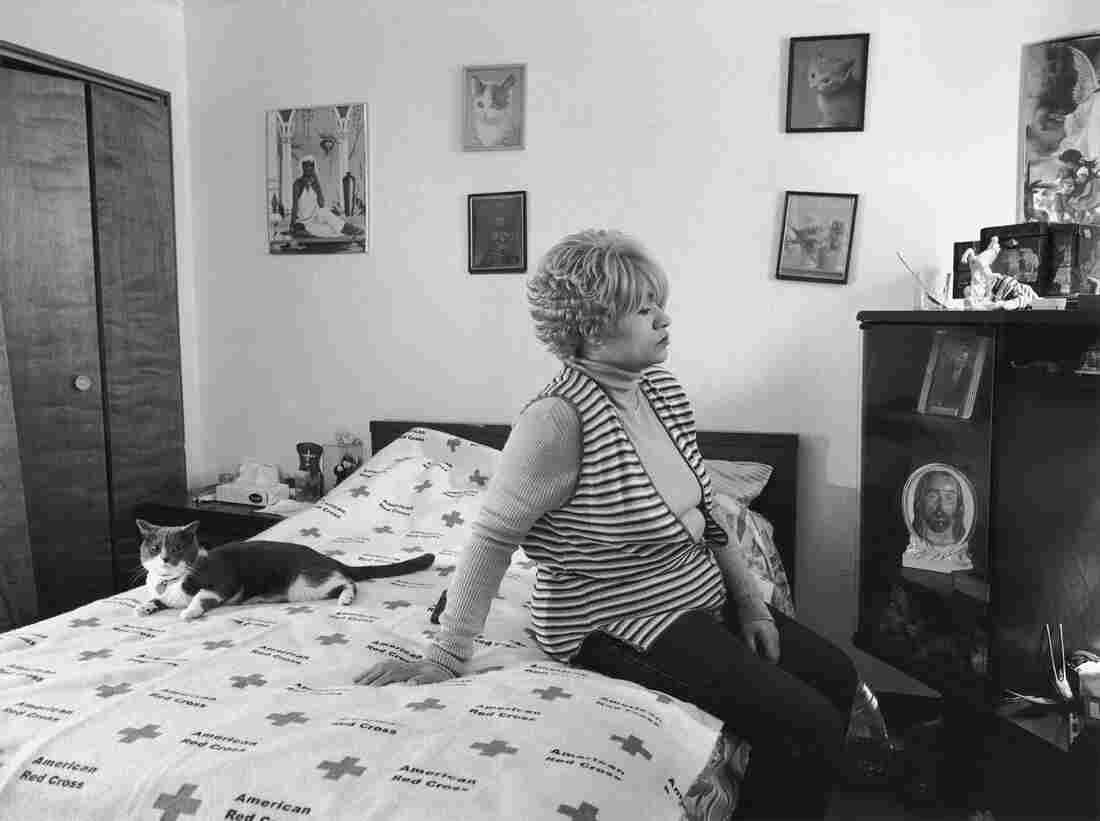 Mom and Her Cat Ziggy on American Red Cross, 2005, from The Notion of Family (Aperture, 2014). LaToya Ruby Frazier hide caption 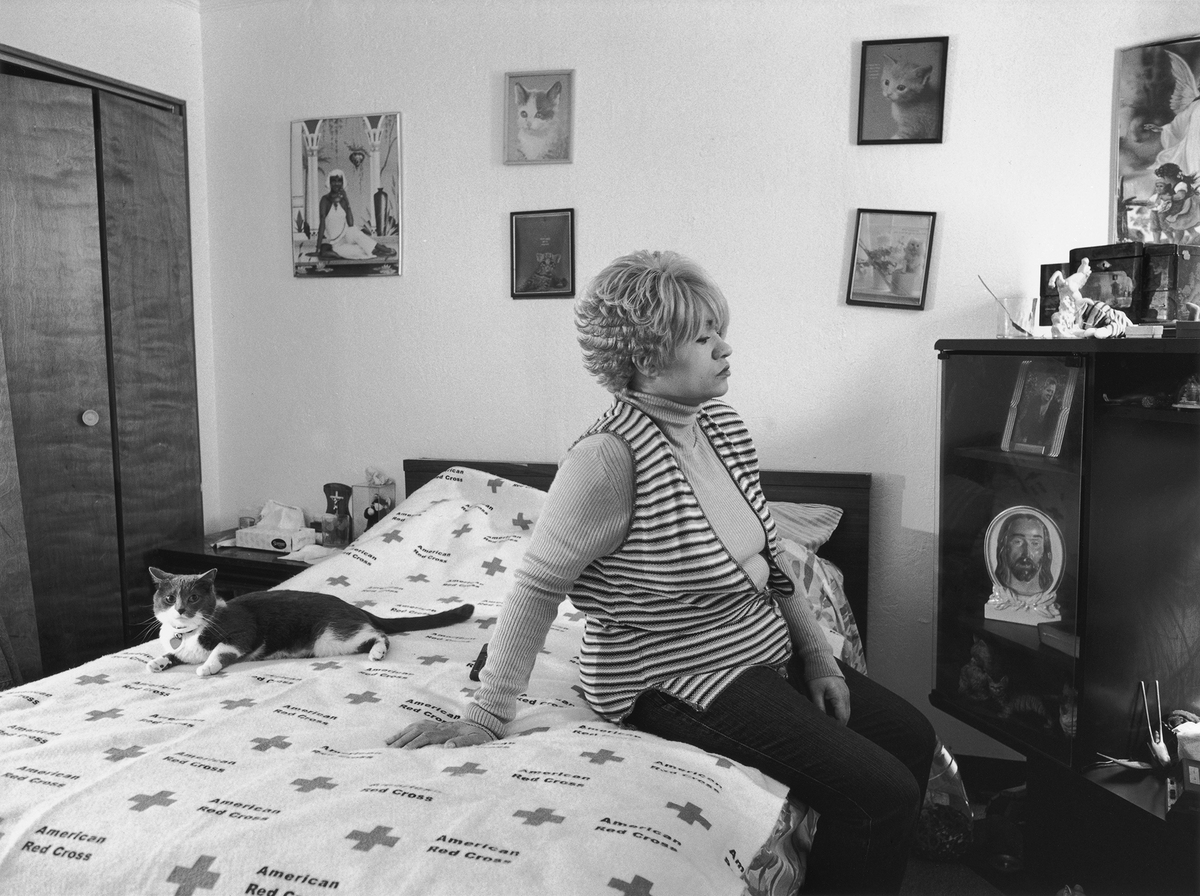 In The Notion of Family, Frazier's mom represents the generation that endured the closing of the steel mills, starting in the 1970s, and the drug epidemic that followed. But Frazier didn't want to tell that story in a stereotypical way. "My work is much larger than a black girl making images about drug addiction," she says. Frazier shot photos of her mom drinking and doing drugs, but those aren't in The Notion of Family because she didn't want the audience to miss the point.

"My mom is not some fragile lady hanging out on a corner with her cheeks sunk in," says Frazier. "She's this woman in her kitschy bedroom where she obviously loves cats. She's got this figurine of Jesus Christ and these angels. All these things that people assume, if you're a black woman living below the poverty line and you've had a history of substance abuse, that you wouldn't have."

Frazier says her work is about enduring injustice, about taking social, economic and physical hits and still standing. She says it may be hard for people to understand if they're not from Braddock, but her work is hopeful. "These things should have killed us," she says, "but we survived it."

LaToya Ruby Frazier's work from The Notion of Family will be showcased at the Aperture Gallery in New York City from May 14 to July 9.