Accessibility links
Making Sense Of Rachel Dolezal, The Alleged White Woman Who Passed As Black : Code Switch Thoughts on the prominent civil rights leader and Africana studies professor in Spokane, Wash., who was accused of being a white woman living her life as a black woman. 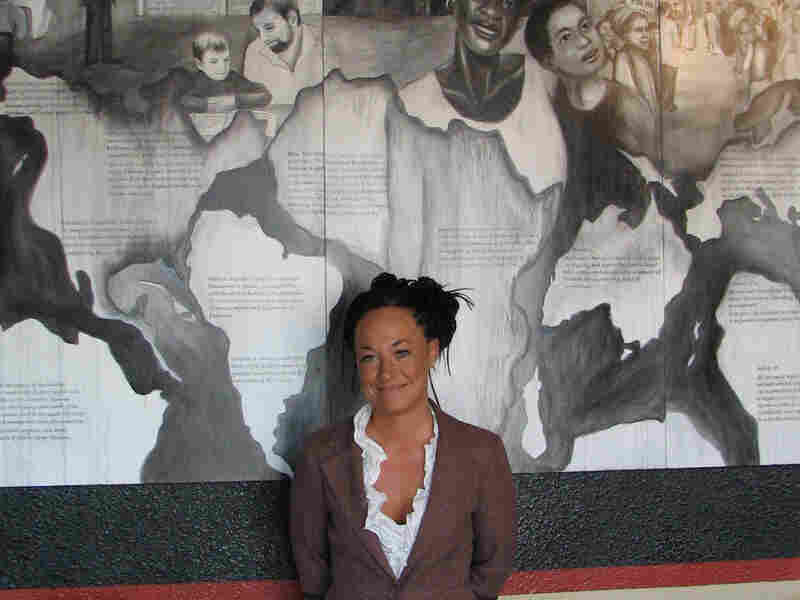 In this July 24, 2009, photo, Rachel Dolezal, a leader of the Human Rights Education Institute, stands in front of a mural she painted at the institute's offices in Coeur d'Alene, Idaho. Nicholas K. Geranios/AP hide caption 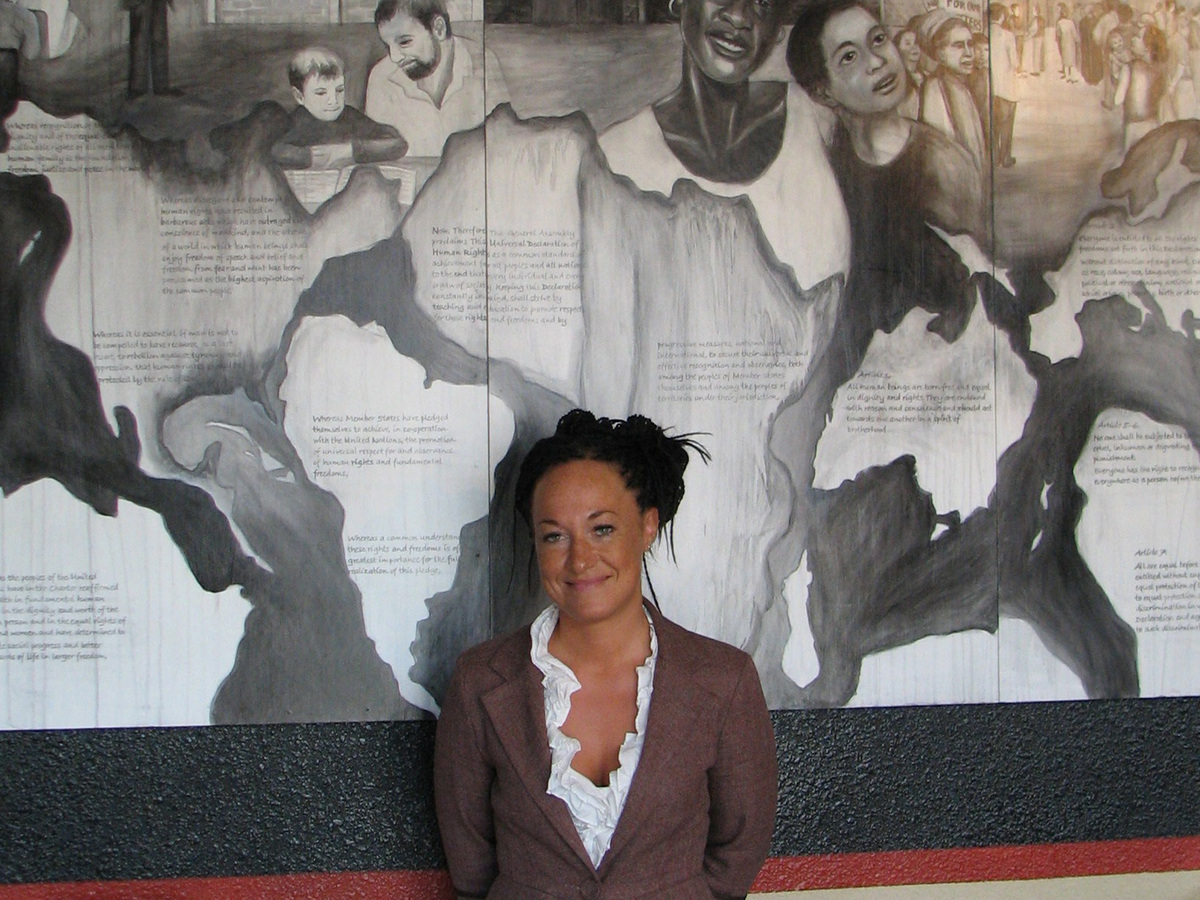 In this July 24, 2009, photo, Rachel Dolezal, a leader of the Human Rights Education Institute, stands in front of a mural she painted at the institute's offices in Coeur d'Alene, Idaho.

In a bizarre turn of events, a prominent civil rights leader and Africana studies professor in Spokane, Wash., has been accused of pretending to be black for personal gain.

Rachel Dolezal, 37, heads up the local chapter of the NAACP in Spokane and has apparently identified as black for several years. Dolezal's story came to light after she was accused of falsifying reports of multiple hate crimes. Local reporters contacted her parents, who made a startling claim backed up by a birth certificate and old pictures. They say their daughter's heritage is Swedish, German, Czech and a little bit Native American. But definitely not black.

Predictably, this story has blown up all over the Internet as people try to make sense of it all: Why did she do it? Didn't anyone suspect? What's up with that hair? We gathered a few thoughtful attempts to understand the broader context of this story.

The Guardian's Gary Younge points out that Dolezal is hardly the first American to try and "pass" for a different race. "As long as there has been racial privilege," he writes, "there have always been people seeking to game the system." But that's where Dolezal sets herself apart:

People generally "pass" in order to advance their life chances. Given the nature of America's racial hierarchy, improving one's lot in such a drastic manner involved black people passing as white — not white people heading the other way. In One Drop, Bliss Broyard recalls white people running from the public records office in Louisiana in tears, having traced their lineage and discovered they had black ancestors.

There's a reason why there's not a mass movement with the hashtag #WhiteLivesMatter.

On social media, lots of people are comparing Dolezal to Caitlyn Jenner, saying "transracial" identity might be like transgender identity. The Guardian's Meredith Talusan explains why that doesn't hold up:

The people comparing Dolezal to trans people are depicting our actions as rooted in the same deceptions as hers: her apparent use of skin-darkening agents and products to change the texture of her hair are, implicitly or explicitly, likened to what "men" — to use a trans woman's example — doing what we do to "deceive" people into thinking we are women.

But Dolezal engaged in such actions in order to be perceived as black, in a racialized American environment where that matters. Trans people transition in order to be the gender we feel inside and, while there may come a time when posers will appropriate trendy trans culture for profit, right now, there's no advantage to transitioning when you're not trans. Trans people don't even have the legal protections — like laws that protect access to housing, public accommodation and employment opportunities — that black people and other racial minorities have fought so hard to win.

Over at Vox, Jenee Desmond-Harris sheds light on a question many are asking: How did Dolezal get away with it for so long?

After all, race — the division of people into groups based on general geographical origins of their ancestors or descriptions of the way they look — isn't, contrary to popular opinion, some official, biological fact. It was invented part of a man-made strategy for making sense of treating some people better than others. Because it is an imperfect, messy system that wasn't thought through in great detail in the first place, there's often disagreement about who fits into any particular category, based on the way they look. ...

Because it's often impossible to tell how people identify just by sizing them up physically, we tend to defer to what people tell us. But in cases like this — when we get new information about their family background or lies that they or their parents have told — doing this can leave our heads spinning and remind us of how arbitrary the connection between physical presentation and identity can be for many Americans.

Desmond-Harris also points out the "serious side of an absurd story":

What Dolezal is accused of is more than just the basis of a thought exercise about race. Many people are deeply offended by the idea that someone whose family suffered none of the horrifying systemic racism African Americans endure would seem to so gleefully immerse herself in and enjoy the trappings of black culture. And any assertion that she had good intentions but had to fib to attend Howard University or work for the NAACP doesn't hold up: white people can, and do, do both of these things.

But most infuriating to some is the idea that she may be able to retreat comfortably back into a white identity, leaving the racism she claims to have experienced as a black woman behind.

And finally, Jezebel's Kara Brown has a series of questions she'd like to put to Dolezal:

Is her husband part of this charade or is he also just learning that the woman he previously thought was just light-skinned is actually a whole other kind of light-skinned?

How did she get her hair in those coils? Was it Miss Jessie's? Kinky Curly perhaps?

In a failed attempt to explain what in the high holy...hell she was doing, Dolezal said in response to a question about her race: "We're all from the African continent." True, Rachel, but then why doesn't every human in America consider themselves African American?

We'll keep an eye out for more attempts to make sense of Rachel Dolezal's story. If you come across any you'd like to share, please leave them in the comments below.

A previous version of this post included a quote attributed to feminist critic bell hooks; in fact, the statement was posted by a bell hooks fan page and was never said by the author. The statement compared Dolezal to Iggy Azalea and asked, "Why waste time being at the bottom of a lengthy hierarchy of white women ... when you can be fast tracked to the top of the hierarchy of‪ black women?"