Accessibility links
'Project Fatherhood': In A Struggling Neighborhood, Dads Are Helping Dads : Code Switch A dedicated group of fathers in Los Angeles is working to help neighborhood dads do better by their children and their community. 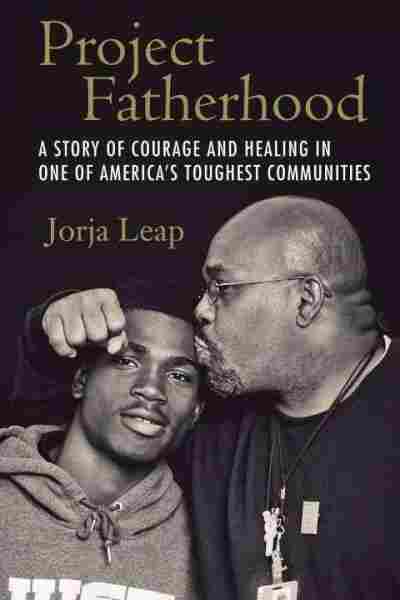 It's early evening and several men are making their way, alone or in twos or threes, to the community room at the Jordan Downs public housing complex. This building looks like everything else here: squat, rectangular, painted boring, government-regulation beige. But what's going on inside is pretty exciting.

It's Wednesday night, and Project Fatherhood is in session.

As always, it opens with a prayer, led by Elder Michael Cummings, known to most everyone as Big Mike. A towering man with a shaved head and sharply observant eyes, Big Mike asks for God's guidance in their work and for protection for the neighborhood's young people.

These men, most of them former gang members or inmates, have become community activists and advocates for the young people living in Watts, one of the poorest neighborhoods in Los Angeles. Their goal is to make sure the children of Watts have wider horizons and more opportunities than their parents did.

To understand the monumental task they're facing, you have to understand Watts. It was where a number of black folks settled during the Great Migration in the 30s, 40s and 50s, and back then was a small, homey community that was big in spirit and poor in resources.

It also bore the brunt of what would come to be called the Watts Riots in August 1965, when a resident's confrontation with the police turned violent, and sparked some of the deadliest urban unrest in modern history. Whole swaths of Watts burned down as people protested police aggression and the lack of opportunity caused by segregation.

Even today, 50 years later, there are no chain grocery stores here, no neighborhood movie theaters. Jobs for residents are scarce, and often require skills that haven't been taught. This is why a number of men say they ended up in the drug trade; they'd rather do that than let the county welfare system feed their children. It's a point of pride, says UCLA professor Jorja Leap. "It's really important to them to be able to say I raised my son or my daughter, not the county.'"

Leap has spent several years working with gangs and former gang members. Her latest book is Project Fatherhood: A Story of Courage and Healing in One of America's Toughest Communities.

Leap's book chronicles the five years she has spent working with Big Mike Cummings and the men of Project Fatherhood to help young men become better fathers. The Jordan Downs fathers don't want their children repeating the mistakes they made, and they believe helping to grow good fathers is the way to do that.

But how can you teach fathering if you didn't have a father yourself? 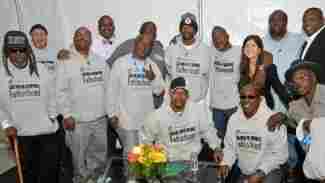 "They all openly talk about not having fathers, wishing they had fathers, "Leap says. By reaching out to the young men, the fathers of Jordan Downs are trying to ensure that doesn't continue.

Big Mike says the young men are primed to be taught:

Some don't do anything, for fear of doing the wrong thing. Now, says Big Mike, they have a place to learn those things: "you come here, you know what to do."

A lot of what they do is talk...about everything from keeping their kids out of trouble, to maintaining a good relation with the children's mothers, even if they're no longer together, and to knowing what their rights as fathers are.

"In the beginning, it was hard to get the men to talk," Leap admitted. "You have to make yourself vulnerable to the others. There was reluctance. But after a few key people opened up," the rest followed.

The men of Project Fatherhood have bonded — some tightly — over the years. They have become unafraid to express emotion, and were deeply shaken with John King, the policy and development director from the Housing Authority who is a both guide and honorary member, told the men a thirteen year old girl from a nearby project had committed suicide.

Apparently, the child had a chaotic home life, and some kids bullied and taunted mercilessly about her about her ratty hair and unkempt clothes.

It takes a village to raise a child, and I believe Project Fatherhood is that village.

Willie "Elementary" Freeman says he's heard some of the story. "We gotta make sure this doesn't happen again," he tells the members as they nod. The men made a plan to develop a checklist they could carry, warning signs that might show a child is disconnected, scared or depressed. And, Freeman warns, different kids might need different approaches: "Everybody ain't the same."

These solutions aren't coming from Leap or King; they're coming directly from the Jordan Downs fathers. It's community leadership at the community level.

Recently, the fathers met with the Housing Authority to negotiate jobs for residents in and around Jordan Downs. The result: when the complex is renovated, 30 percent will stay in the community. Several men have begun construction apprenticeships in anticipation.

This is a big deal, says Big Mike Cummings, because the men are doing all this work together.

"We are helpmates to one another," he says simply. "It takes a village to raise a child, and I believe Project Fatherhood is that village."

And the village is expanding. The fathers of Jordan Downs are helping men in a nearby housing complex start their own chapter of Project Fatherhood.