Accessibility links
Coping While Black: A Season Of Traumatic News Takes A Psychological Toll : Code Switch Research on the psychological effects of racism, especially on people of color, is still in the early stages. But psychologists warn that events like the Charleston shooting can cause serious stress. 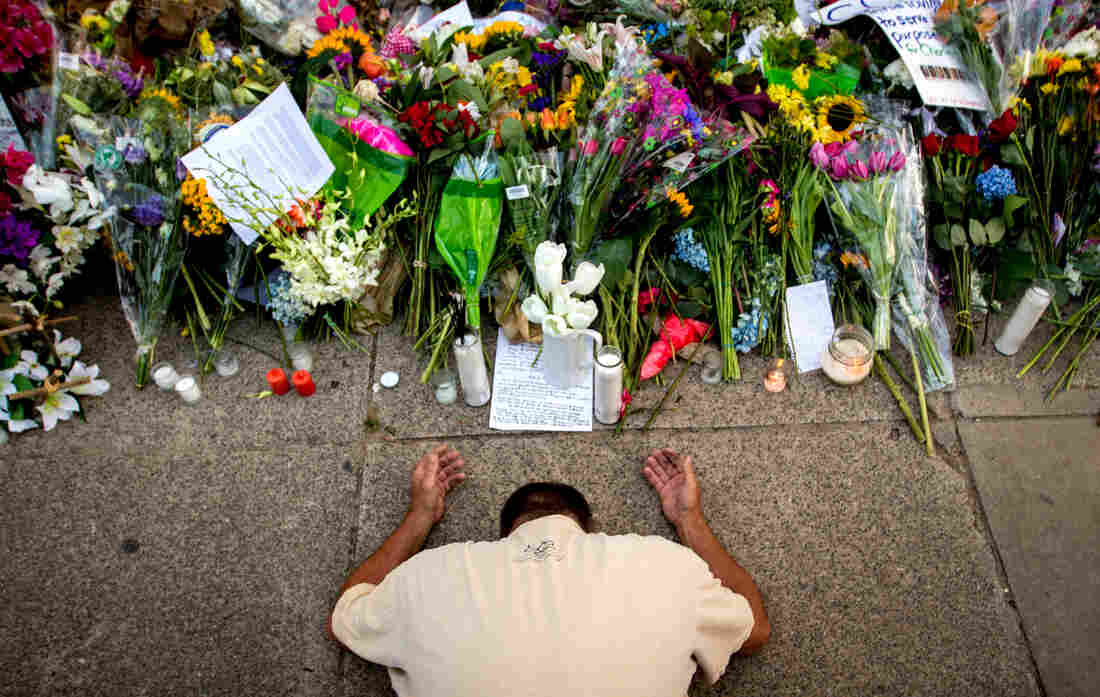 Raymond Smith of Charleston, S.C., kneels in prayer in front of the Emanuel AME Church in Charleston before a worship service on June 21. Stephen B. Morton/AP hide caption 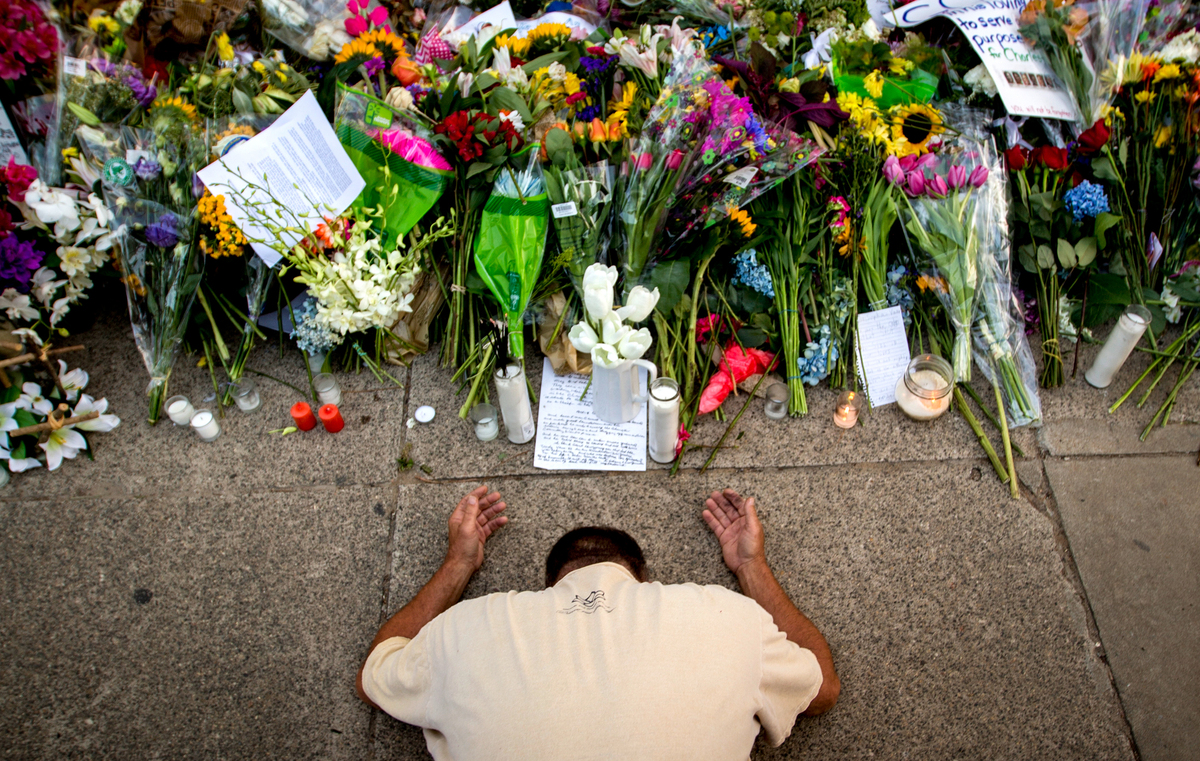 Raymond Smith of Charleston, S.C., kneels in prayer in front of the Emanuel AME Church in Charleston before a worship service on June 21.

Can racism cause post-traumatic stress? That's one big question psychologists are trying to answer, particularly in the aftermath of the shooting at the historically black Emanuel AME Church in Charleston, S.C., and the recent incidents involving police where race was a factor.

What's clear is that many black Americans experience what psychologists call "race-based trauma," says Monnica Williams, director of the Center for Mental Health Disparities at the University of Louisville.

While researchers are still trying to understand exactly how this phenomenon operates, Williams says it's clear that African-Americans are hit hard by incidents that recall the country's ugly history of institutionalized racism.

They can become bothered about things that are not typically worrisome. There might be changes in their appetite. They can just feel weighed down — often not by one incident but by an accumulation.

And such trauma can occur, even vicariously, after events like the recent church attack in Charleston.

"We hear in the news about African-Americans being shot in a church, and this brings up all sorts of other things and experiences," Williams says. "Maybe that specific thing has never happened to us. But maybe we've had uncles or aunts who have experienced things like this, or we know people in our community [who have], and their stories have been passed down. So we have this whole cultural knowledge of these sorts of events happening, which then sort of primes us for this type of traumatization."

Microaggressions, or routine slights, can trigger psychological stress as well, says Carl Bell, a psychiatrist and former CEO of the Community Mental Health Council in Chicago. Black people experience everyday racism, Bell says. "That's the root behind the white woman on the elevator clutching her purse when the black man gets on." That woman might assume, " 'Oh, he's a killer. He's a rapist,' " Bell adds.

And it's not uncommon for black people to be followed around in stores or outright harassed, says Amani Nuru-Jeter, a public health professor and epidemiologist at the University of California, Berkeley. 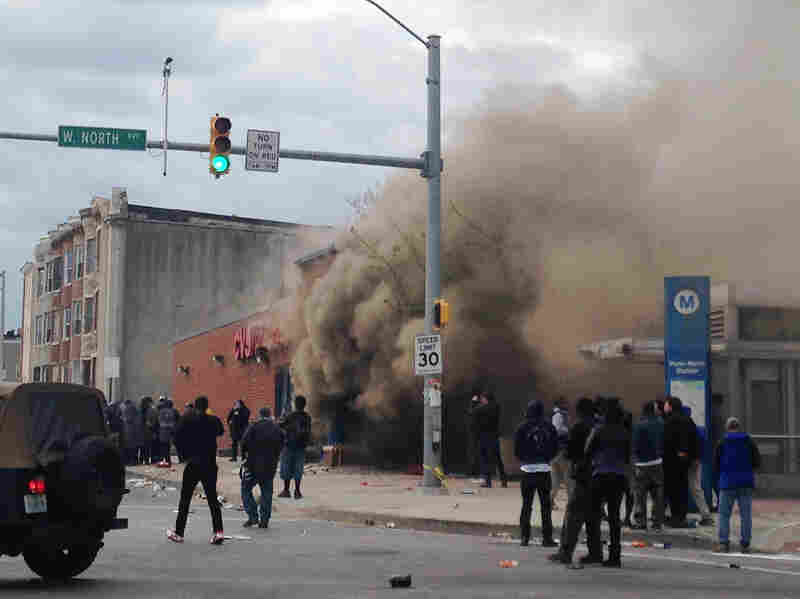 Smoke billows from a CVS Pharmacy store in Baltimore on April 27. Demonstrators clashed with police after the funeral of Freddie Gray, who died from spinal injuries about a week after he was arrested and transported in a Baltimore Police Department van. Juliet Linderman/AP hide caption 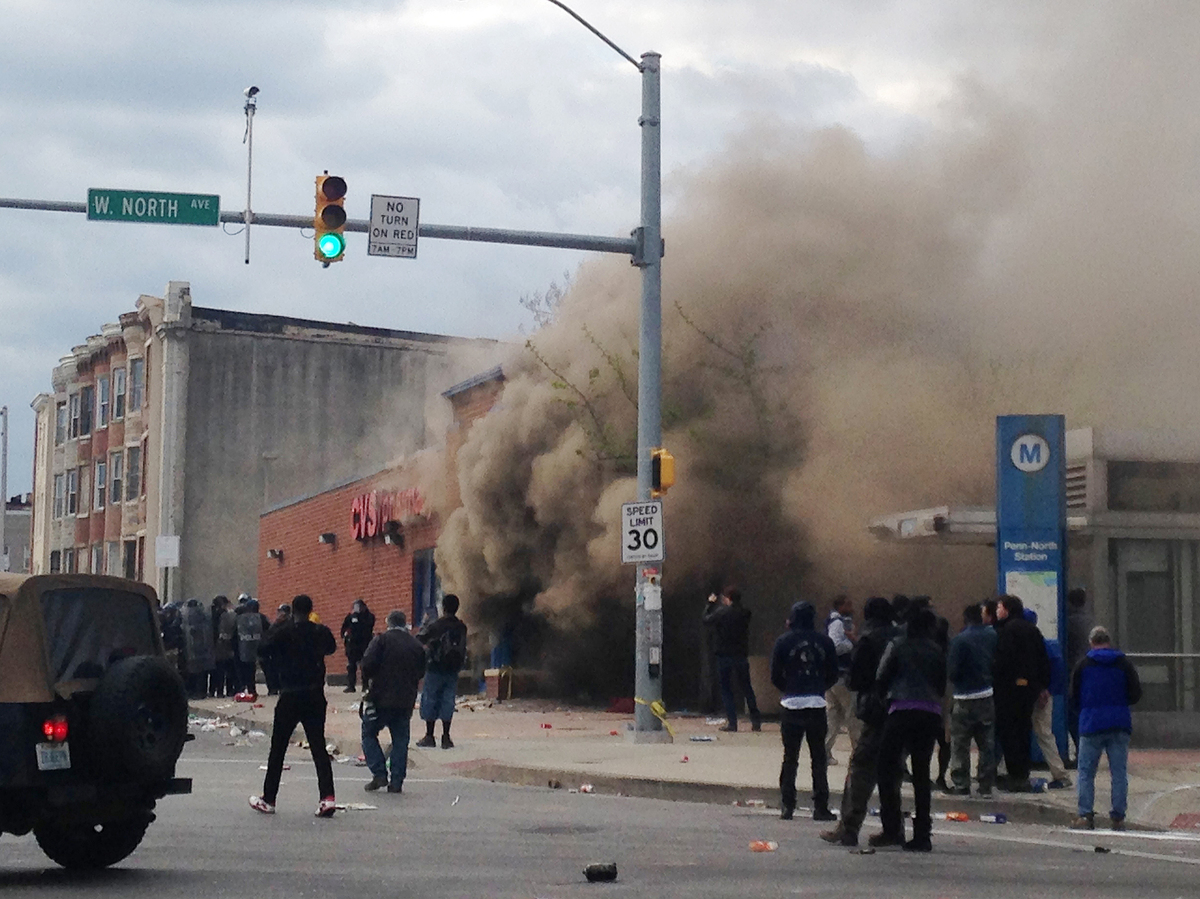 Smoke billows from a CVS Pharmacy store in Baltimore on April 27. Demonstrators clashed with police after the funeral of Freddie Gray, who died from spinal injuries about a week after he was arrested and transported in a Baltimore Police Department van.

This subtle type of discrimination can be traumatic, Nuru-Jeter says, when the victims of these slights believe that it is persistent. She points to last year's fatal encounter between New York police and Eric Garner as an example. Garner died after an officer put him in a chokehold.

For some, Bell adds, "It's not the incident that causes stress, distress or trauma; it's the helplessness in the face of the incident." This can result in a variety of anxietylike symptoms such as distress, tenseness or loss of appetite. Some people become preoccupied with things that are not typically worrisome.

One of the most common coping mechanisms, says Williams, is anger. And that can feed into riots and vandalism.

"That's a totally normal response to ... persistent oppression and racism," she says. "Other more adaptive coping methods would be things like peaceful protests, prayer, taking actions to bring the community together and improving awareness and understanding."

The Psychological Effects Of Seeing Police Everywhere In Ferguson

Currently, the American Psychiatric Association's manual of mental health disorders recognizes racism as trauma, but only in certain cases. But some researchers want to expand the definition of trauma that's fueled by the experience of racism.

Nuru-Jeter says the data are clear that experiencing racism can affect people's health. What's important now, she says, is trying to figure out ways to reduce discrimination so that it doesn't hurt African-Americans' lives and mental well-being.