Accessibility links
In The Age Of #BlackLivesMatter, The NAACP Tries To Reach A Younger Generation : Code Switch The NAACP is holding its annual convention at a time when there are growing questions about the group's relevance to a young generation. 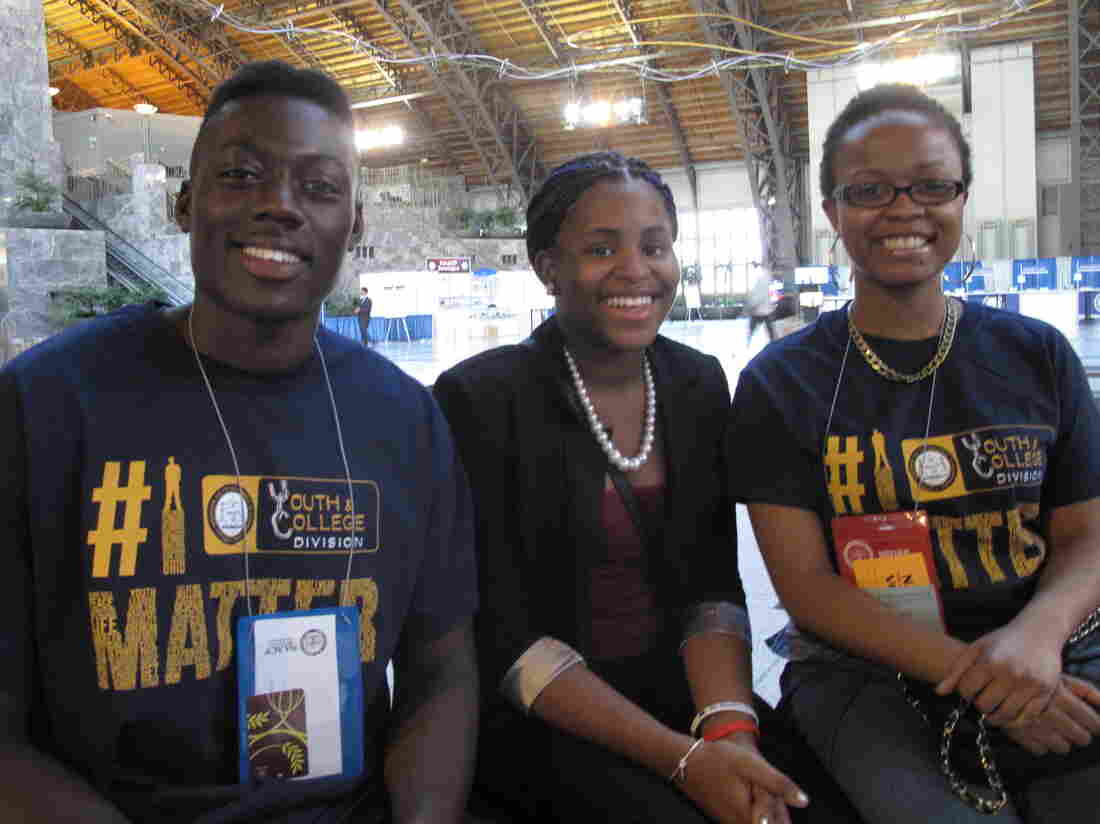 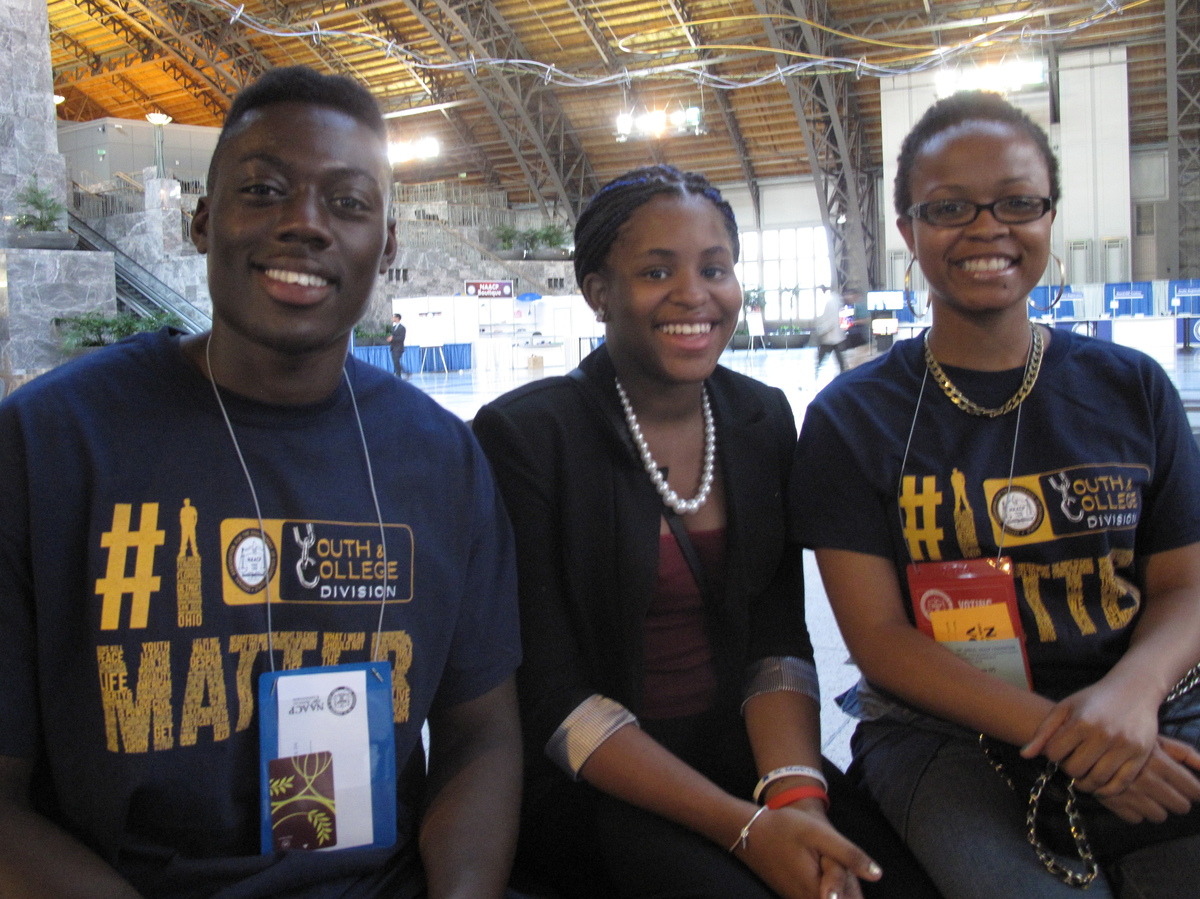 (From left to right) Student members of the NAACP Ekow Nana-Kweson, Trinity Towns and Anscia Brown.

The National Association for the Advancement of Colored People is holding its annual convention in Philadelphia this week. For much of its 106-year history, it has been the nation's preeminent voice for civil rights and social justice. Among the topics of discussion this week: recent events in Baltimore and Ferguson.

But NAACP leaders have also addressed claims that their organization is losing relevance, especially for young people who are coming of age in an era of online activism and new protest movements like Black Lives Matter. 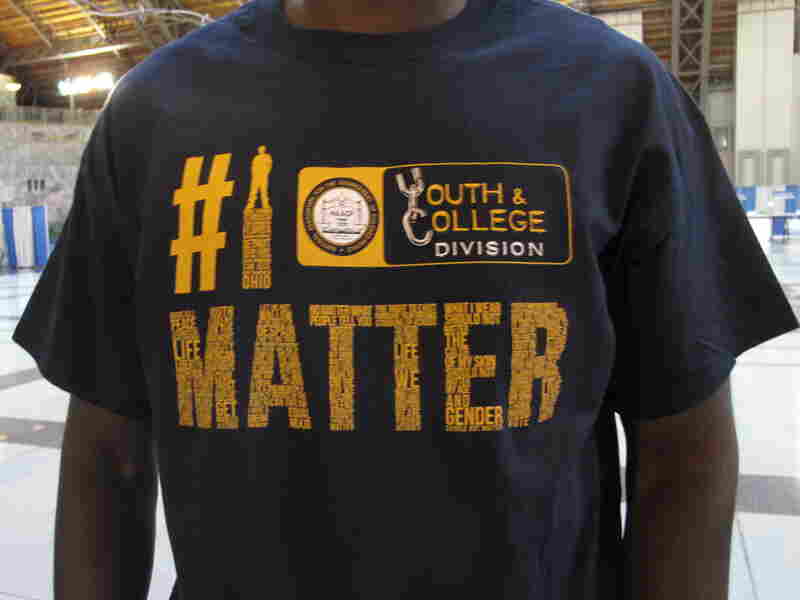 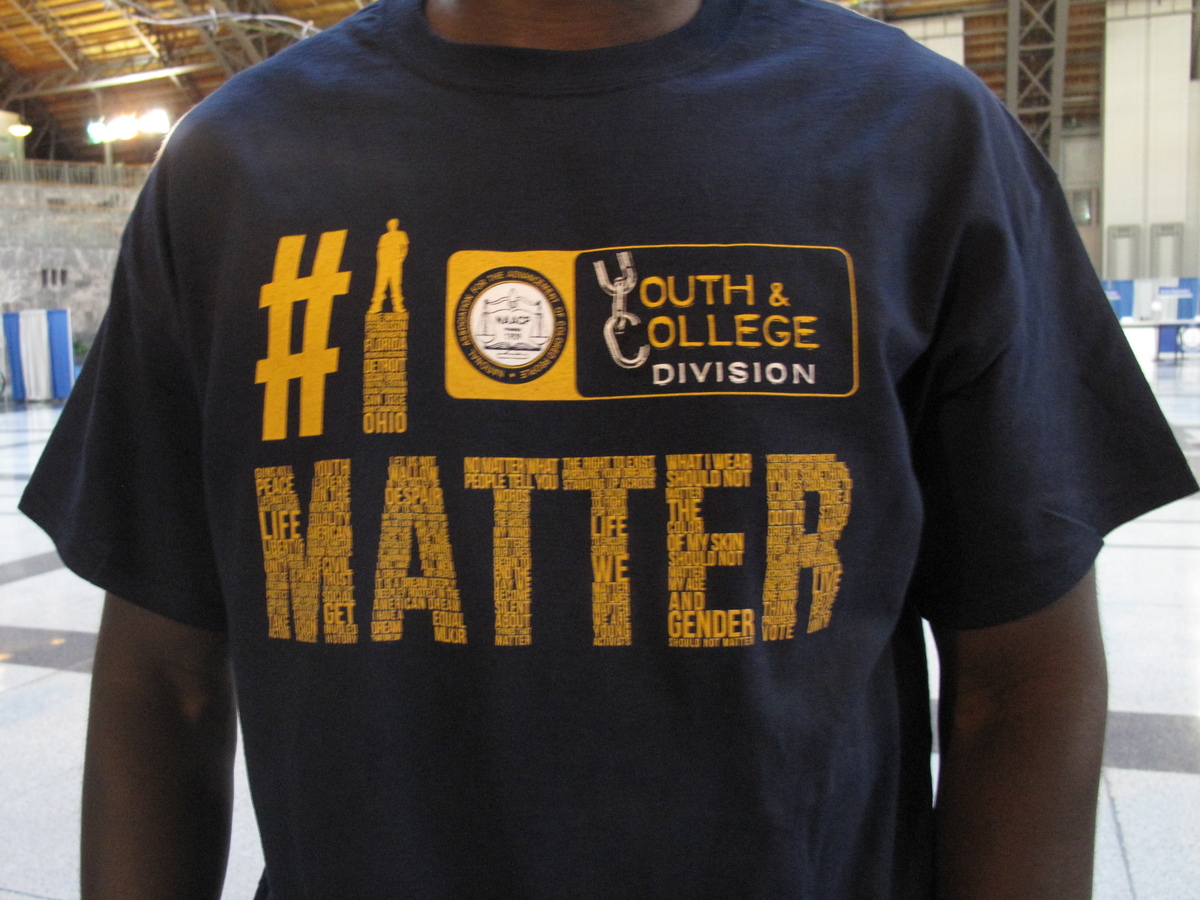 #IMatter is a campaign against gun violence that's part of the NAACP's youth and college division.

On Monday, South Carolina Congressman James Clyburn stood at the convention's main podium. "Sometimes you hear it discussed that the NAACP is outdated," he said. That "all of its leadership are old fogies who are better sent to their rocking chairs." But that's not the case, he says, noting that the organization's chairwoman "ain't but 50 years old. That's pretty young in my books."

In a speech a few minutes later, Brooks gave a passionate defense against critics who he said think of the NAACP as a diminished organization: "We do not crawl on the ground! We do not fall prostrate before problems! We are not relegated to the dust! We are not insects! We are an American iconic institution! We are the NAACP!"

It is still one of the nation's most influential black organizations. After all, both Presidents Obama and Clinton attended this week's convention. So why the need to defend the NAACP so vigorously?

For years now, some activists have said the NAACP has fallen behind the times. They recognize the crucial role it played in ending legalized discrimination during the Civil Rights Era. But they say it has been less effective in countering racism today, while Black Lives Matter and other protest movements have exploded.

Nat Chioke Williams is president of the Hill-Snowdon Foundation in Washington, D.C., which has started funding the Black Lives Matter movement as it works to move beyond Twitter and social media and become a national grass-roots network.

"One of the things that I think is really evident in the last year," he said, "is that the Black Lives Matter movement has captured the hearts and minds and public consciousness in a way that the NAACP and other civil rights organizations have not captured." 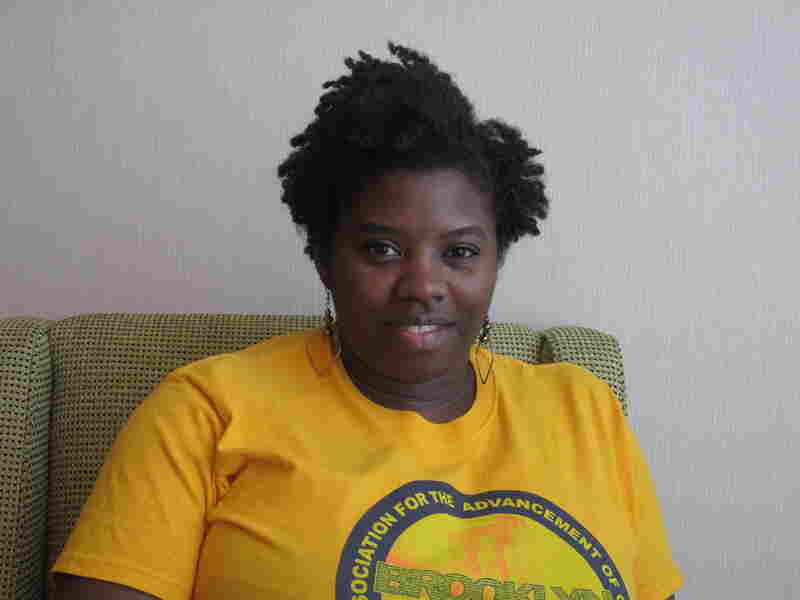 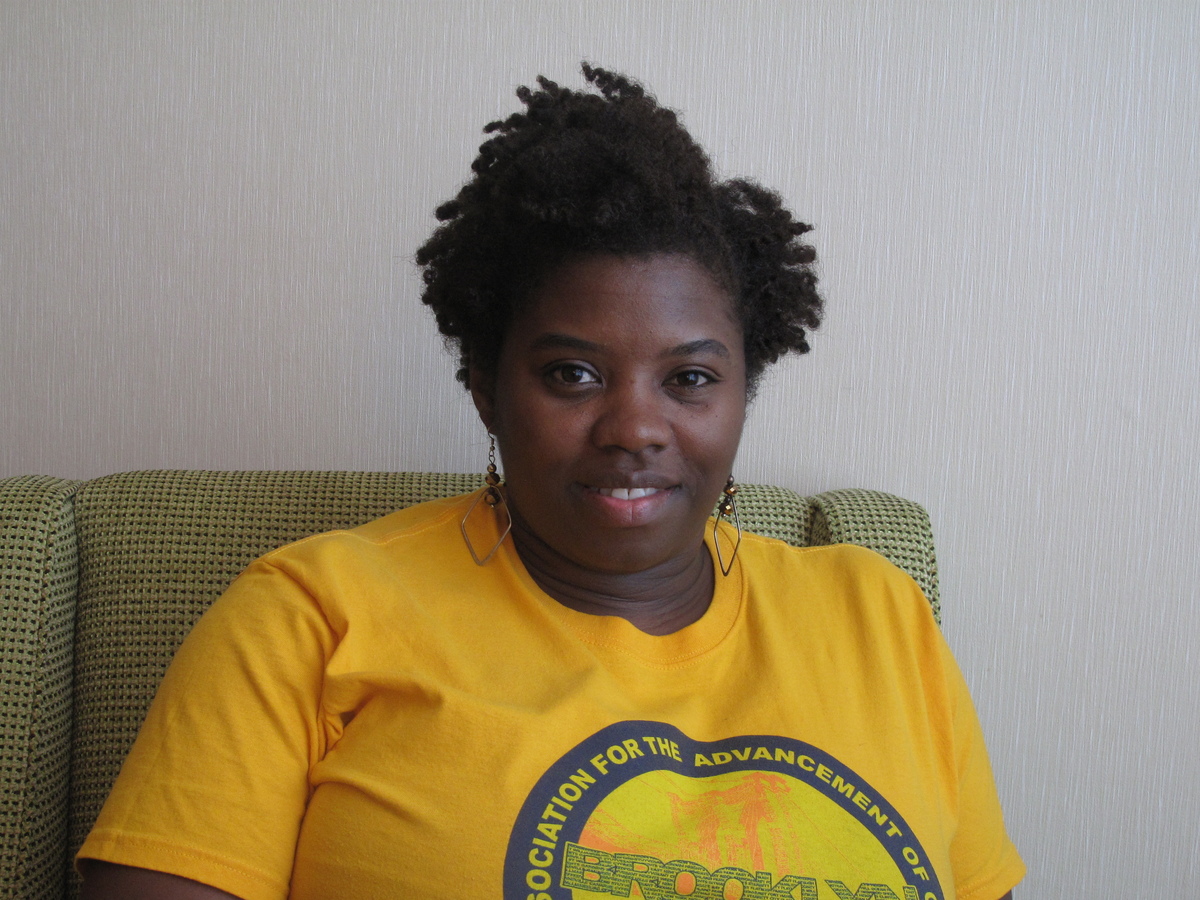 Williams believes that the NAACP is still a relevant organization, but he said it has to become more responsive to the way young people want to get involved.

"I think we're witnessing the birth of a new phase of the ongoing struggle for black freedom, equality and justice in this country," he said. "Historic organizations like the NAACP have to find ways in which to connect with the new energy and the new formations that are out there."

L. Joy Williams is the 36-year-old president of the NAACP branch in Brooklyn, and she agrees with that. But she says she's not really worried that the NAACP is becoming irrelevant, "because there's no other organization like ours." That is, with offices nationwide and lobbyists roaming the halls of power.

Williams sees the work of so-called hashtag activists as complementing the NAACP's work, and vice versa. "There's a role for everyone to play in the work. If all you're capable of is spreading the word by retweeting, you're needed. If you have the time, dedication and fortitude to say I'm going to volunteer blood, sweat and tears, you're needed. It's not an either-or conversation."

Still, Williams says engaging young people online and on social media is crucial to the NAACP's future. During a break in the convention, Williams introduces us to some student members of the NAACP. Anscia Brown and Ekow Nana-Kweson joined the branches at their universities. After a New York City cop was cleared in the killing of Eric Garner, Nana-Kweson's chapter at Hofstra saw on Instagram that Brown's chapter, at St. John's, was staging a die-in. "Hofstra almost like copied St. John's," he says. "It was like a catalyst effect. As we saw a lot of people were doing the die-ins, we were encouraged to do it as well."

Brown says her school's NAACP chapter got the idea for the protest from Instagram, too, and posted Black Lives Matter posters around campus. That is, she tapped into her NAACP network to help spread #BlackLivesMatter messages that were blowing up her social networks. In other words, world converge.