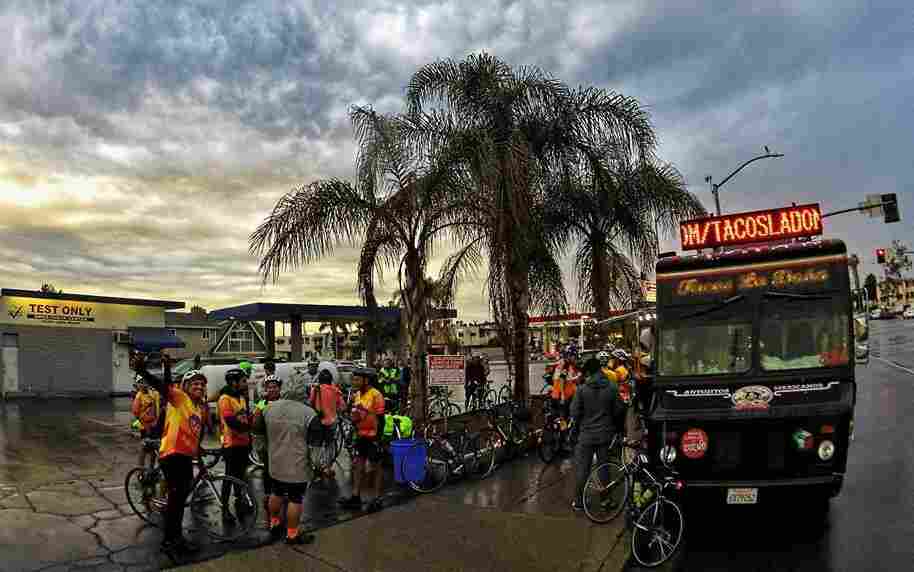 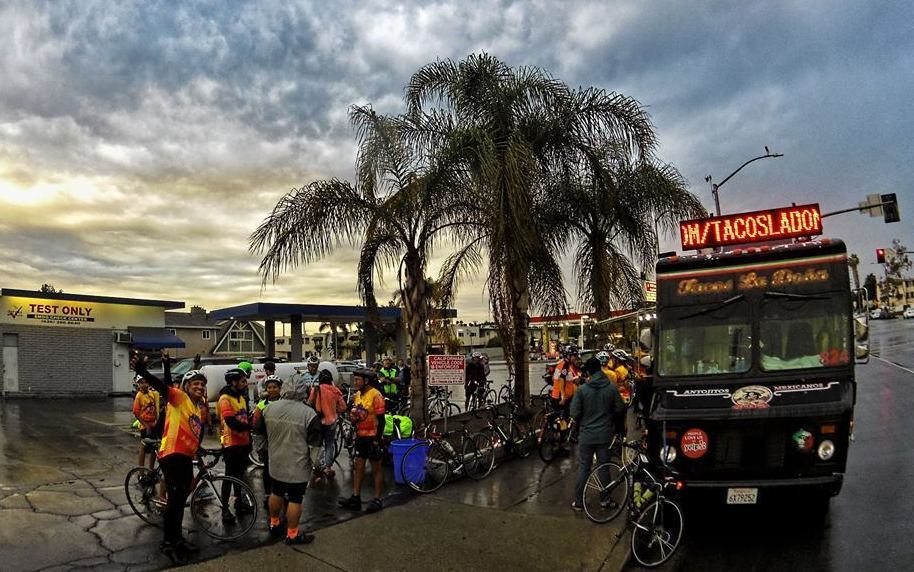 The Eastside Bicycle Club on a 35 mile Saturday evening ride with stops for tacos.

Decked out in spandex and a yellow and orange racing jersey with Eastside Bicycle Club: Ride To Live on the front, Gabriela Bilich was hanging out at club founder Carlos Morales' bike shop before a Saturday evening group-ride last weekend, joking with the other cyclists in spanglish.

Bilich says a couple of years ago, she would never have imagined herself riding a bike through the streets of LA. She says the cycling world just didn't feel welcoming to a 40-something Latina from Southeast LA who struggled with her weight.

"I used to hang out at the Rose Bowl a lot. I used to go walking and I would see the cyclists go by, the whir of the peloton [pack] going by so fast," she remembers. "All I ever saw were white dudes, tall skinny white dudes on the bikes, middle-age men in Lycra riding around the Rose Bowl and so I was like, 'Okay, that's another thing white people do.' "

But after being introduced to the roughly 400-member Eastside Bike Club, which is mostly Latino, bilingual and bi-cultural, Bilich has found a cycling family where she feels right at home. She's celebrating her one year bike-a-versary this month and credits cycling for her weight loss, but more importantly, her happiness. 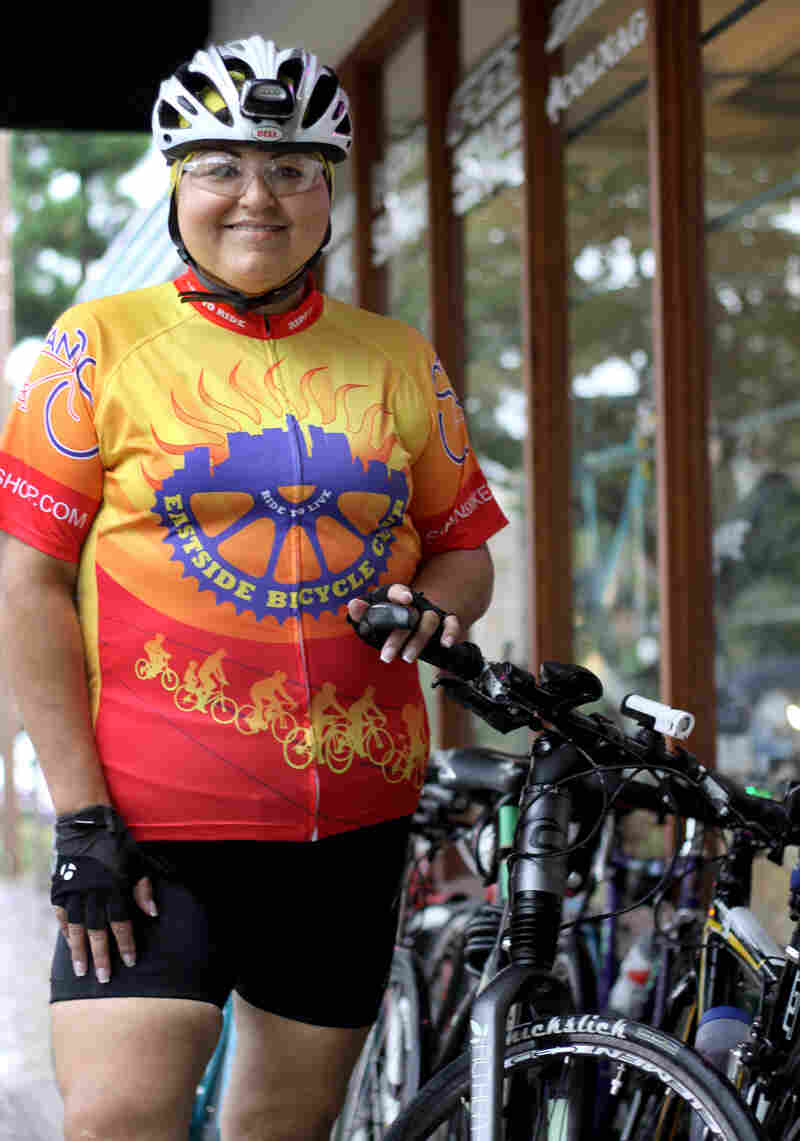 Gabriela "Gabby" Bilich never thought she'd end up riding a bike as her main source of exercise. "All I ever saw were middle-aged men in Lycra riding around," she says. Shereen Marisol Meraji/NPR hide caption 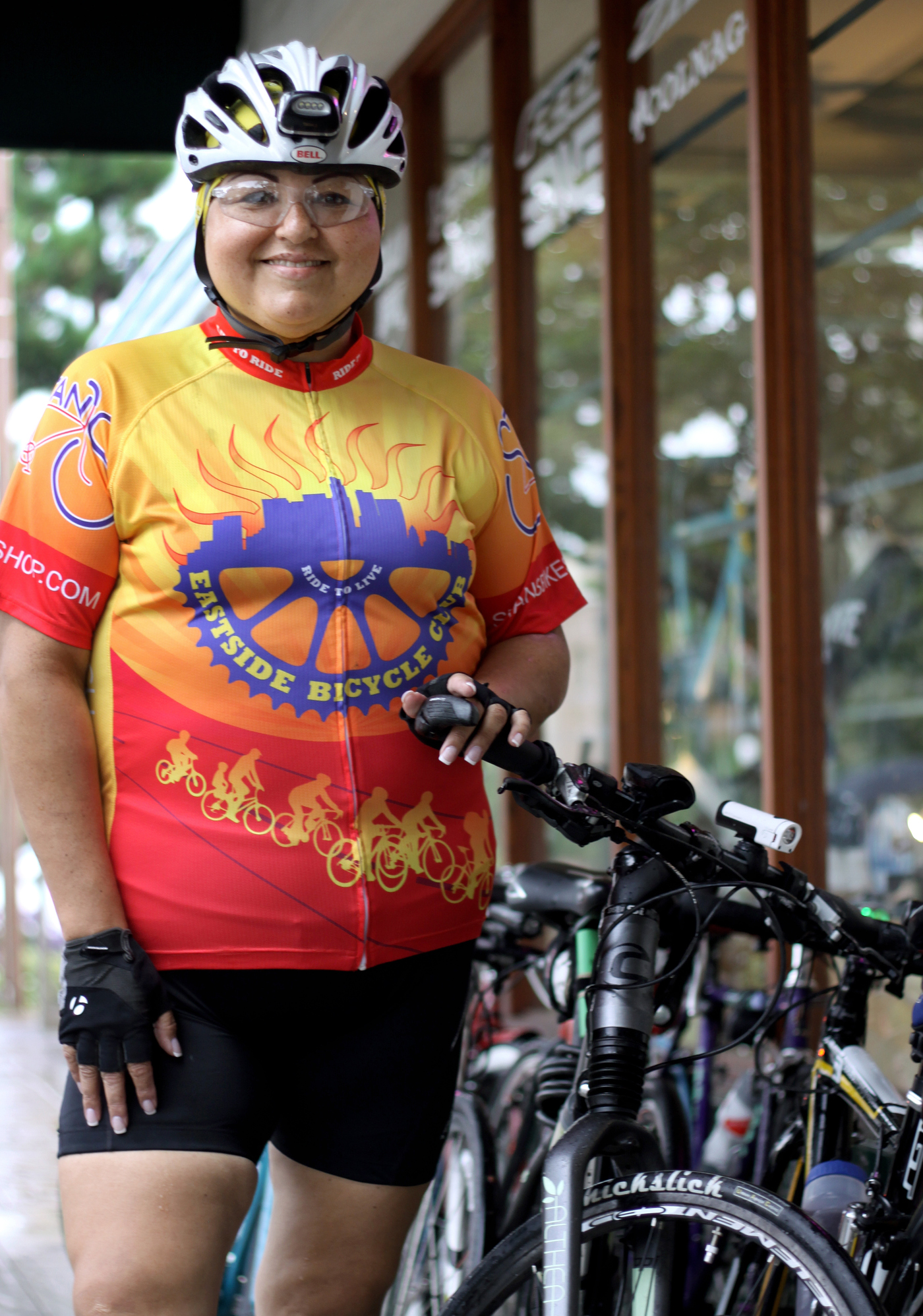 Gabriela "Gabby" Bilich never thought she'd end up riding a bike as her main source of exercise. "All I ever saw were middle-aged men in Lycra riding around," she says.

"I was never an athletic person in my life," she says. "This is the first time that I've ever found anything that I liked and that I'm completely addicted to, you know? It's my therapy."

In fact, weight loss is what initially pushed Carlos Morales, the founder of the club, to get on a bike in 2008, after a years-long battle with obesity. At age 48, he was 400 pounds and on a dozen different medications. A sobering discussion with his doctor convinced him that if he didn't get in shape, he'd die.

Morales loved basketball, but was carrying too much weight to play. The next best thing: riding a bike. He remembered he loved biking around his East LA neighborhood as a kid and hoped it would bring him the same satisfaction as an adult. He spent months swimming to lose enough weight that he felt comfortable balancing on the old bike collecting dust in his garage.

As word of the ride spread, the number of cyclists grew from eight to 20 to 60. People in the neighborhood would come out and clap, Morales recalls. "They thought we were doing something special, and we were just having fun."

Now there are hundreds of active Eastside Bike Club members in on the fun, and Morales has turned cycling from a recreational activity into his life's work. A few years ago, he bought a high-end bike shop that had been catering to customers that could buy fancy bikes for thousands of dollars. He kept the name, Stan's Monrovia Bicycles, but changed things up a bit. Morales brought in more affordable models, and made the shop into a place where both a Hollywood producer and a day laborer could be comfortable, and where Spanish is spoken as freely as English.

Around 6 p.m., Bilich and nearly two dozen other riders headed out from Morales's bike shop parking lot and onto the unusually wet Southern California city streets. A tropical storm surprised the riders, but they decided to brave the weather and continue what Morales calls the "tour de tacos," a 35-mile trek with half a dozen stops at taco trucks along the way.

Morales says the Eastside Bike Club is about exercising — he calls the streets of LA his gym — but adds the social aspect is just as important. Having gotten so much from cycling, Morales wants his club to be a place where anyone interested can do the same. It's free to join; all you need is a bike that works and the will to make the wheels turn. The rest will take care of itself.

All summer, Code Switch is reporting stories on R&R: Race and Outdoor Recreation. Recently, we hung out with Korean and Korean-American hardcore hikers to find out how hiking has remained such a big part of Korean heritage.