On Wyatt Cenac, 'Key & Peele,' And Being The Only One In The Room

On Wyatt Cenac, 'Key & Peele,' And Being The Only One In The Room 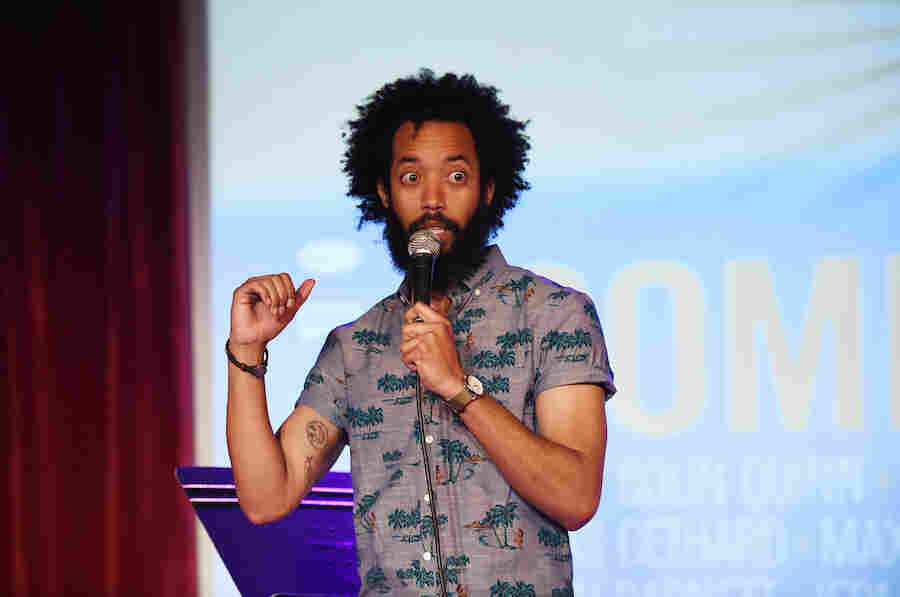 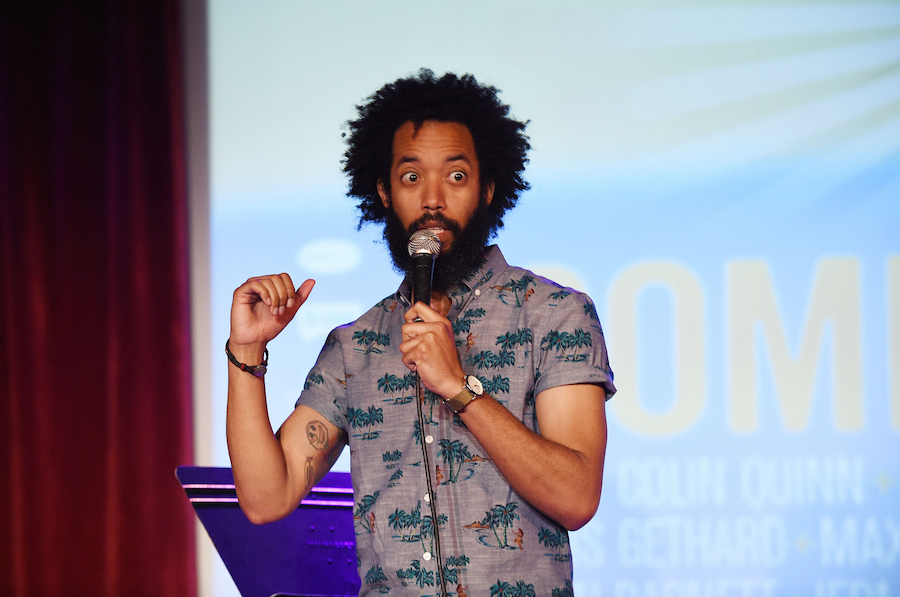 Comedian Wyatt Cenac performs onstage at the Vulture Festival Presents: Comedy Night at The Bell House on May 31 in Brooklyn, New York.

Last week, the Internet exploded after an episode of the WTF! Podcast with Marc Maron went online. The guest was the comedian Wyatt Cenac, who talked about being a writer and correspondent on The Daily Show for several years. He recalled getting into a heated argument with Jon Stewart over the host's impression of Herman Cain, which Cenac had found troubling:

"[Stewart] got incredibly defensive. I remember he was like, 'What are you trying to say? There's a tone in your voice.'

"I was like, 'There's no tone. It bothered me. It sounded like Kingfish [a minstrel-like Amos 'n' Andy character].'

Much of the ensuing hullabaloo over Cenac's recounting of this incident focused on the fact that Stewart, a reliably liberal skewerer of the racial missteps of Washington's powerful, appeared to have badly mishandled a conversation about race with one of his own staffers.

But less attention was paid to what Cenac had to say about being the only black writer in the room, torn between speaking up or saying nothing and keeping the peace. (Full disclosure: Cenac is a personal friend.) "I gotta be honest if something seems questionable," he told Maron, "because if not, then I don't want to be in a position where I am being untrue not just to myself but to my culture, because that's exploitative. I'm just allowing something to continue if I'm just going to go along with it. And sadly, I think that's the burden a lot of people have to have when you are 'the one.' You represent something bigger than yourself whether you want to or not."

The Stewart-Cenac exchange illustrates what those of us who are often The Only One In The Room tend to know: It sucks.

The Stewart-Cenac exchange illustrates what those of us who are often The Only One In The Room tend to know: It sucks. But besides being personally burdensome and annoying, there's social science that suggests that when people feel isolated as the outlier in a larger group because of their race or gender, it counteracts the benefits their "diversity" was supposed to help achieve in the first place.

Not long ago, I spoke to Scott Page, a professor at the University of Michigan who studies how people interact in teams and organizations. His work on a mathematical formula to show how greater diversity makes organizations more effective has been explored in The New York Times. Page told me that while there's been a lot of conversation lately about increasing the numbers of non-white, non-male people in various companies and sectors, it's left open the question of how many folks those organizations are supposed to be aiming for. Is one enough? Is 10 too many? Can you fiddle the dials to calibrate some sort of ideal workplace diversity score?

Page says it all depends on what you're trying to achieve. If you simply want more women in the room, that's easy enough: just hire a woman and stick her at a desk. Your room has, indeed, become more diverse. Time for happy hour.

But if what an organization wants is new perspectives and getting people to actually think differently and come up with new ideas, then they'll need to use different calculus, altogether.

"One question you can ask is how many people of a particular group have to be in a room for them to speak," Page told me. That is: having a woman in a room doesn't mean much if she doesn't feel comfortable speaking up. And Page said he's found in his research that the presence of just one member of a minority group can influence the rest of the group to be more cognizant of their own language and behavior. But he said said that there is an actual, knowable formula for the number of women you might need in a room in order for the women in that room to feel comfortable speaking up. That number will be different from the number of women you would need in the room in order for the women in it to have their ideas validated. And that number is different, still, from the number of women who would need to be present to have any individual woman's idea to turned into an action item. (Page said that other group dynamics matter here, too, like the the size of the group, the individual personalities and professional standing of the people therein.)

Page said that being the Only One becomes an even more difficult distinction when it comes to speaking up about a charged subject — like, say, Cenac voicing his concerns over the Herman Cain skit. Questions about whether an idea might be offensive often put them "in the position of speaking for all women or for all black people." (Which, again, sucks.) It's kind of the kind of situation Cenac found himself in. As he told Maron in their interview, he wasn't sure whether he'd just been fired after his heated argument with Jon Stewart. Cenac said he went outside, sat on a baseball field and broke down. "I was shaking, and I just sat there by myself on the bleachers and f----g cried. And it's a sad thing. That's how I feel. That's how I feel in this job. I feel alone," he said.

Cenac stayed on the show for another year but took something of a back seat for the rest of his tenure. Eventually, he decided to leave altogether, a move that he says was partly connected to his rocky relationship with Stewart.

Being the Only One might suck, but you put up with it to get your foot in the door. That could mean being the only black writer on the staff of The Daily Show or something far more mundane.

You could see a good example of the precarity of Only One-ness in a recent, much-circulated clip from Comedy Central's Key & Peele. (The show's namesake duo announced last week that the current season will be its last.) In that sketch, Key and Peele play two black dudes vying to inhabit the implied "one spot" for a person of color in an an otherwise all-white college cappella group. In order to win over the white dudes in the group they're trying to join, they lean into some hacky, hammy "black dude" schtick — jokes about big penises, jokes about how crazy white people are – a kind of blackness that calls attention to itself while still being safe and cliché.

After the white dudes leave the room, though, it's a different story. The black dudes drop the genial face and beef over their right to be the token black guy. ("Do you have any idea how long it took me to infiltrate this group?" one asks the other.) 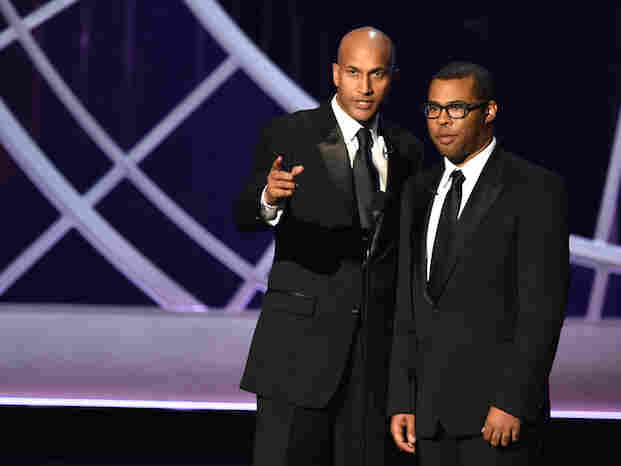 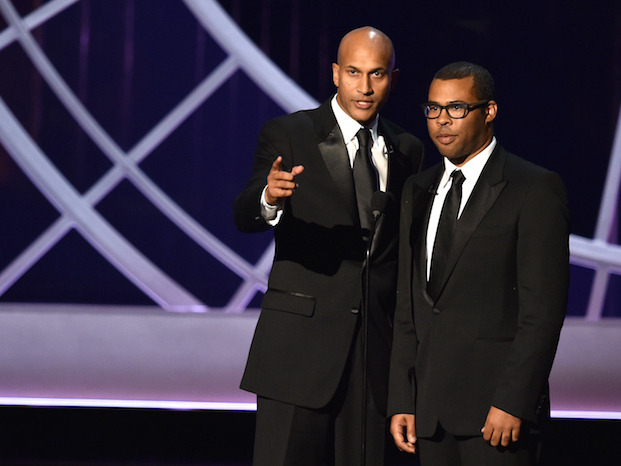 There's some real-world anxieties buried in there? What happens when you're in a space that seems to have room for Just One, and the racial currency that helped you get in the door suddenly becomes less rare? And what happens if your racial identity is part of what got you picked for the team, but staying on the team is contingent on not shaking things up?

Tanner Colby teased out this very real workplace tension in an essay over at Slate last year, poking at the racial dynamics of the real-world comedy troupe at Saturday Night Live. Colby pointed to the long list of black comedians who joined the show's cast and eventually departed on unhappy terms (Chris Rock, Damon Wayans, Yvonne Hudson, Danitra Vance, Dean Edwards, Jerry Minor, Finesse Mitchell, Ellen Cleghorne, etc.) — often because they felt they were being typecast — and the much-shorter list of black comedians who had long, successful careers on the show (Maya Rudolph, Tim Meadows, Kenan Thompson).

The difference, he notes, is that the comedians who struggled at SNL tended to come up through black comedy clubs, performing for black audiences, while the ones who flourished cut their teeth in lily-white comedy proving grounds like Second City and Upright Citizens Brigade, which were more aligned to the comedic sensibilities of their future SNL cast members. Because of their backgrounds, they had more practice navigating white spaces, and presumably, were more comfortable being the outlier.

Colby wrote that by prioritizing the soft skill of "navigating white spaces" means that in the end, corporations get a kind of numerical diversity that doesn't move the needle on including new perspectives:

The tension eventually prompts so many of The Only Ones to throw up their hands and bounce.

When racial-justice advocates call for more diversity, what they're saying is that the hiring pipelines into America's majority-white industries need to be expanded to include a truly multicultural array of voices and talents from all ethnic corners of America; they want equal opportunity for minorities who don't necessarily conform to the social norms of the white majority. When exasperated hiring managers use the word diversity, what they really mean is that they're looking for assimilated diversity—people like Rudolph and Zamata. More Bill Cosbys. More Will Smiths. Faces and voices that are black but nonetheless reflect a cultural bearing that white people understand and feel comfortable with.

That tension is eventually what prompts so many Only Ones, like Cenac, to throw up their hands and bounce.

Page, the organizational theorist, told me that's to be expected when people feel excluded from groups in which they're trying to find footinf, whether we're talking about something niche as a writers rooms or a society more broadly. "If you feel like there's a group and there's a vision and you're not part of that vision, you're just going to exit,"he said."There's a sense that you're going to have to stand up and shout — or you're going to leave."