Accessibility links
So You Flunked A Racism Test. Now What? : Code Switch Scientists are working on ways to train our brains away from deeply held prejudices — including hacking your subconscious while you sleep. 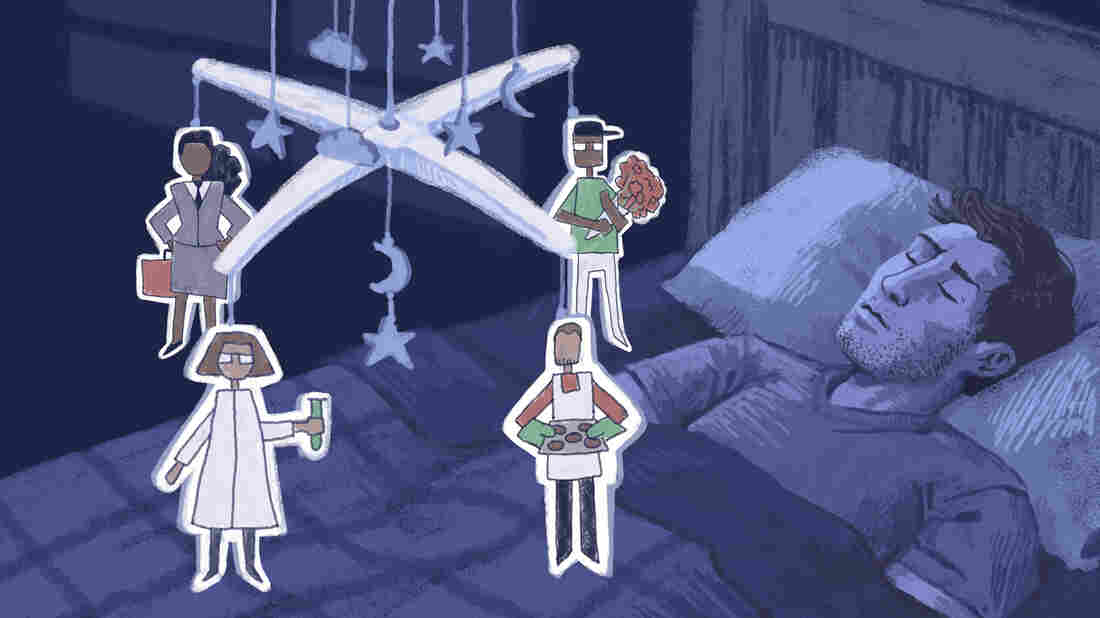 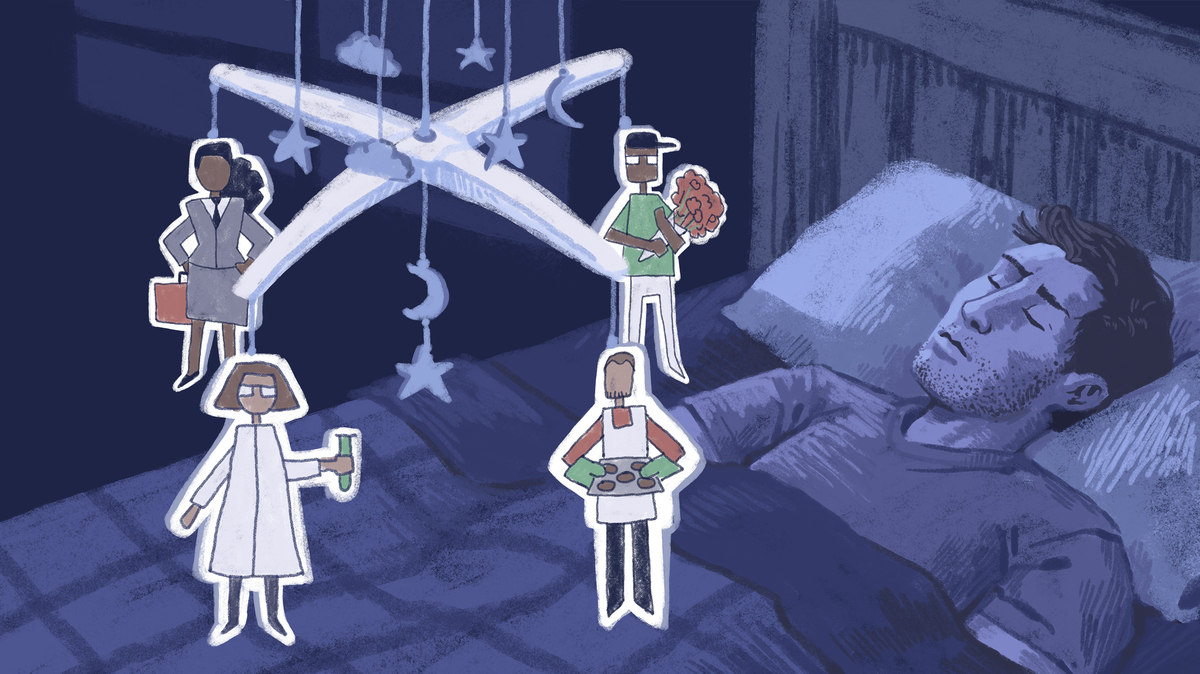 You're probably at least a little bit racist and sexist and homophobic. Most of us are.

Before you get all indignant, try taking one of the popular implicit-association tests. Created by social psychologists at Harvard, the University of Washington, and the University of Virginia, they measure people's unconscious prejudice by testing how easy — or difficult — it is for the test-takers to associate words like "good" and "bad" with images of black people versus white people, or "scientist" and "lab" with men versus women.

These tests find that — regardless of how many Pride parades they attend or how many "This is what a feminist looks like" T-shirts they own — most people trust men over women, white people over minorities, and straight people over queer people. These trends can hold true regardless of the gender, race or sexuality of the test-taker. I'm from India, and the test found that I'm biased against Asian-Americans.

So if you, like nearly everybody else, got a worrisome score on the implicit-association test, you might be wondering: Now what? A few scientists are trying to figure out whether our most deeply rooted prejudices can be rewired, and they're testing out some wild ideas along the way.

An Antidote For Prejudice?

Of course, there is no pill you can take to rid yourself of racism — though scientists have looked for one. In one small study, researchers at Oxford University found that taking propranolol, a drug that's normally used to reduce blood pressure, may also lower implicit racist attitudes. But even the brains behind that study say their results might have been coincidental.

Most major efforts to combat implicit prejudice, however, involve in-person or online anti-bias training. A couple of years ago, researchers at the University of Virginia held a sort of race: They challenged scientists to come up with rapid-fire ways to disable stereotypes. Most were unsuccessful — and even when scientists managed to reduce bias, the effects were modest and didn't last long.

More recently, researchers at Northwestern University wanted to see if they could remedy racism and sexism during sleep. Yes, it sounds like a scammy fad — shed pounds while you snore! — but the results, which were published in the June issue of Science, show that it's possible, but even harder than we thought.

First, the researchers had 40 volunteers take implicit-bias tests like the ones described above to measure how prejudiced the participants were from the start.

Then, they had everyone go through an anti-bias training program. The volunteers were exposed to images that countered deeply held stereotypes — they saw photos of female faces next to words associated with math or science, like "experiment" or "lab," and black faces paired with pleasant words like "sunshine," "smile" and "honor."

Throughout this training, the researchers played a series of sound cues in the background. A specific tone played each time a participant saw an image of a woman paired with a science-related word, and another tone played whenever they saw a picture of a black man alongside positive words.

Later, the volunteers took a 90-minute nap. Once everyone was fast asleep, the researchers softly played the same sound cues again to reinforce the day's training. "When they woke up, they had no idea what had happened while they were sleeping," explains Ken Paller, a neuroscientist and psychologist at Northwestern and one of the study's authors.

"We still don't know if changing people's results on the Implicit Bias Test translates to them acting differently toward minorities in the real world."

And, voila! When participants took the same implicit-bias tests after the nap, they were up to 50 percent less biased.

It may sound straight out of sci-fi, but "it's not all that surprising, actually, given what we know about how the brain works," says Paller. While you're sleeping, he explains, your brain goes over what you learned during the day and mashes it up with stuff you already know.

"The brain is sort of digesting that information while you sleep," he explains.

Paller and his colleagues were trying to hack that cognitive digestion process, forcing participants' brains to review and internalize the counterstereotypical associations that they were exposed to during the training.

Should the paranoid among us worry that forced anti-racism re-education camps are coming? Hardly. Even if this technique works, it can't be used on the unabashedly bigoted — whether asleep or awake, your brain will retain only things you want to learn. "These procedures would only work on cooperative people," Paller says. That is, our brains are good at blocking out information we don't like.

For the participants of Paller's study, the reductions in implicit bias lasted for up to a week. That may not sound like a lot, but it's a big improvement over previous anti-bias training programs, which stuck for just hours or a few days, tops.

Where Do We Go From Here?

Perhaps more important than the lasting effects of this particular approach, Paller's findings are proof that our implicit attitudes are malleable — and maybe, just maybe, it is possible for people to let go of prejudice for good, if they want to. But it won't be easy.

"Adults have had years and years of exposure to stereotypes," Paller says. And biases take hold early — studies have found that kids as young as 4 and 5 show racial and gender bias. "It can take a lot of effort to reverse that."

Paller stresses that this is very preliminary research. To confirm the results, a lot more people have to be tested. "Plus, we still don't know if changing people's results on the implicit-bias test translates to them acting differently toward minorities in the real world," he notes.

The bottom line: There's no silver bullet, says Anthony Greenwald, a social psychologist at the University of Washington who helped develop the implicit-association test. At least not yet. "But I'm open-minded," says Greenwald, who wasn't involved in Paller's study. "It will be interesting to see if these results can be reproduced."

Greenwald, who perhaps understands more about bias than just about anyone, has taken the implicit-association test himself. His results haven't budged over the years. He's still biased along racial and gender lines, he says, "even though I really don't like having these biases."

Until we better understand how to actually reduce innate bias, the best we can do is try to ensure our prejudices affect our decisions as little as possible, Greenwald says. For instance, he says, "blind auditions for musicians can work really well." And taking the names off resumes can help ensure that hiring managers don't choose candidates based on gender or race.

"Until our culture changes to the point where we don't have these negative ideas about certain groups," Greenwald says, "it may be that our implicit biases are probably here to stay."