Accessibility links
Charlotte's Trial: How Jonathan Ferrell's Death Put A City's Self-Image At Risk : Code Switch As a police officer is tried for manslaughter in the death of an unarmed black man, is Charlotte's reputation for progress on race on trial, too? 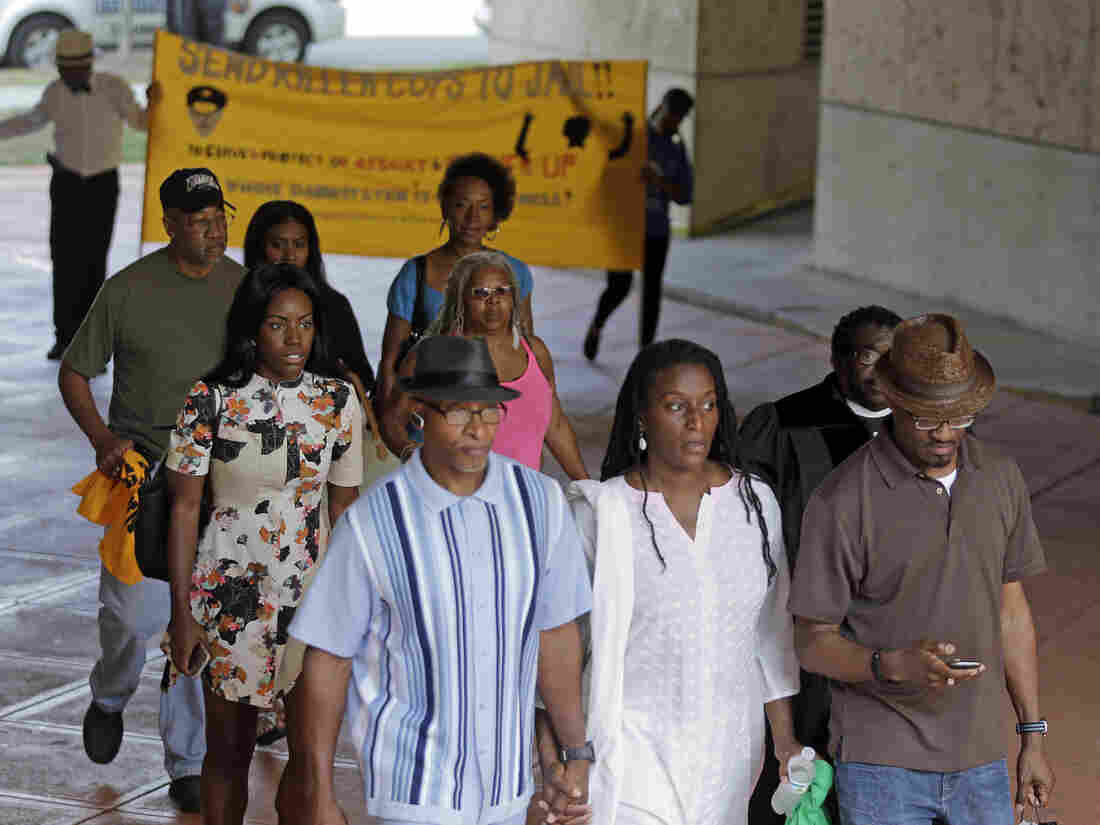 Protesters arrive at the Mecklenburg County Courthouse on the first day of the trial of former Charlotte-Mecklenburg police Officer Randall Kerrick in Charlotte. Kerrick is charged with manslaughter in the shooting death of Jonathan Ferrell. Chuck Burton/AP hide caption 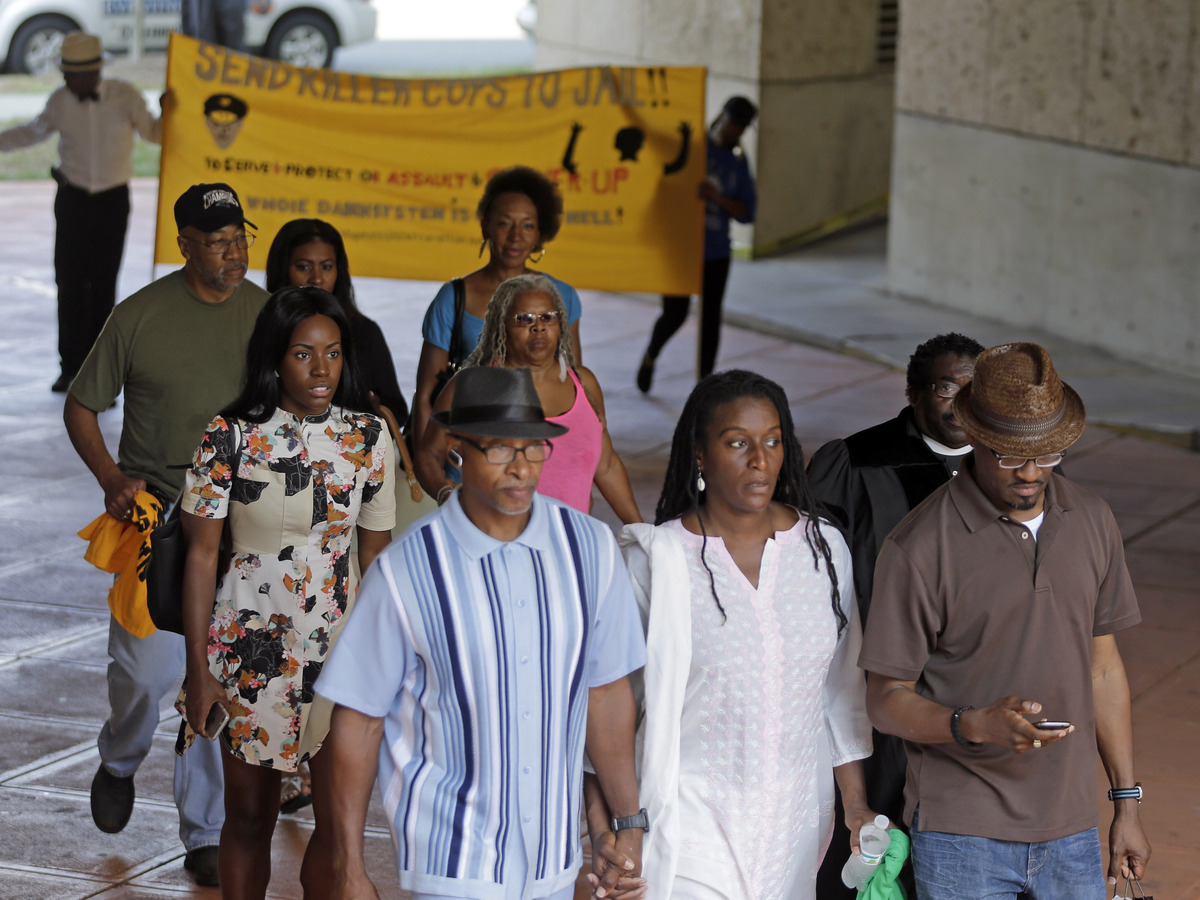 Protesters arrive at the Mecklenburg County Courthouse on the first day of the trial of former Charlotte-Mecklenburg police Officer Randall Kerrick in Charlotte. Kerrick is charged with manslaughter in the shooting death of Jonathan Ferrell.

When Jonathan Ferrell knocked on a stranger's door after a car crash in Charlotte, N.C., he was probably disoriented and looking for help. The stranger's frantic 911 call after she saw a black man at her door brought the police, including Randall Kerrick. What happened next is now being argued in a Charlotte courtroom. But as the white former police officer goes on trial for voluntary manslaughter in the shooting death of the unarmed 24-year-old, a city's image will be on trial as well.

Charlotte has been dragged into a national conversation it would much rather avoid, one on the often uneasy, sometimes deadly interactions between African-American citizens and law enforcement officials. With its leafy streets and progressive reputation, it's not supposed to be a place where a search for help can go so wrong. Didn't images from the 2012 Democratic Convention prove that Charlotte is a diverse mosaic where everyone gets along, not a place where its citizens revert to black and white in a crisis?

But in conversations — both informal and organized by the city's institutions and places of worship — there are questions, tensions and a realization that Charlotte isn't the place many thought it was. In reality, it's an integrated city where it's very easy to live a segregated life.

What's troubling is that it took one more death, one additional young, black man gone for this latest wake-up call.

Charlotte's proud narrative began in the not too distant past: Harvey's Gantt's triumph as an African-American mayor in a majority white city in the 1980s, or peaceful school integration in the 1970s. When I moved to Charlotte in the 1990s, I lost track of all the folks who bragged how the city passed a racial tolerance test that Boston flunked back then when buses of black school children in that northern cradle of democracy were greeted with violence.

But the truth was always more complicated. In the quiet, lovely Myers Park neighborhood I moved into, there weren't many people who looked like me, a legacy that could be explained in some deeds with restrictive covenants, now unenforceable, that limited home ownership to those of the "Caucasian" race.

In the nationally ranked high school a few blocks away, students of all races interacted in activities and sports, but my son was the only black male in his academic magnet program, which was, in its way, a school within a school. And while he was praised and lauded as a part of the "High Q" team that won televised state championships two years in a row, a white mother still questioned scholarship offers, saying, "Of course he's only getting them because he's black." And this, even though her son would never have passed the toughest math class without my son's help!

Now the schools — which started to re-segregate after a successful challenge to the original busing order — are not giving all its students the same chances. While the achievement gap is closing, white students are more than 10 percent more likely to graduate high school. And leaders in Charlotte seemed truly shaken when the city ranked last in a 2014 study on upward mobility in America's 50 largest cities. When the report made the news, was Charlotte genuinely concerned about all of its citizens or about its reputation? Probably a bit of both.

Still, there is some civic pride in how Charlotte handled the Kerrick case. After the initial shock, the city felt we got it right. There was an immediate investigation, led by then-Chief of Police Rodney Monroe, who is black. Kerrick was quickly arrested and then charged not by the first, but by a second grand jury. Kerr Putney, the new police chief who took over after Monroe retired last month, is also African-American. He has pledged to maintain both the peace and space for protests.

But the case is far from closed — in the court and in the streets and homes of Charlotte. At forums throughout the city, I've observed all the emotions unleashed: anger, puzzlement and the desire for honesty and reconciliation. Large and diverse crowds try to talk with — not at — one another. Many individuals who are not lulled by Charlotte's pride in the past are passionate about creating a new narrative, and dropping what remains of gauzy remembrances of how Charlotte is somehow more enlightened when it comes to matters of race.

What's troubling is that it took one more death, one additional young, black man gone for this latest wake-up call. Like in Charleston, where it took nine lives for long-overdue action, that price is way too high for honest talk and action in Charlotte.

Jonathan Ferrell worked two jobs, planned to return to college and marry the fiancée he followed to our city. He must have thought he was in that new Charlotte, the one we brag about, where a black man looking for help at a stranger's door would get the benefit of the doubt. As much as I value the new openness brought on by Ferrell's death, I only wish he had knocked on my door.

Mary C. Curtis is a journalist in Charlotte, N.C. She has worked at the New York Times, the Baltimore Sun, the Charlotte Observer, as a national correspondent for Politics Daily and was a contributor to The Washington Post. Follow her on Twitter.