Accessibility links
Who Fixes Detroit? Young Black Detroiters Want To Resurrect A Lost Neighborhood : Code Switch Black Bottom was once a vibrant black oasis in Detroit, till it was demolished for a freeway. Now, young black visionaries in Detroit are experimenting with a new Black Bottom for the 21st century. 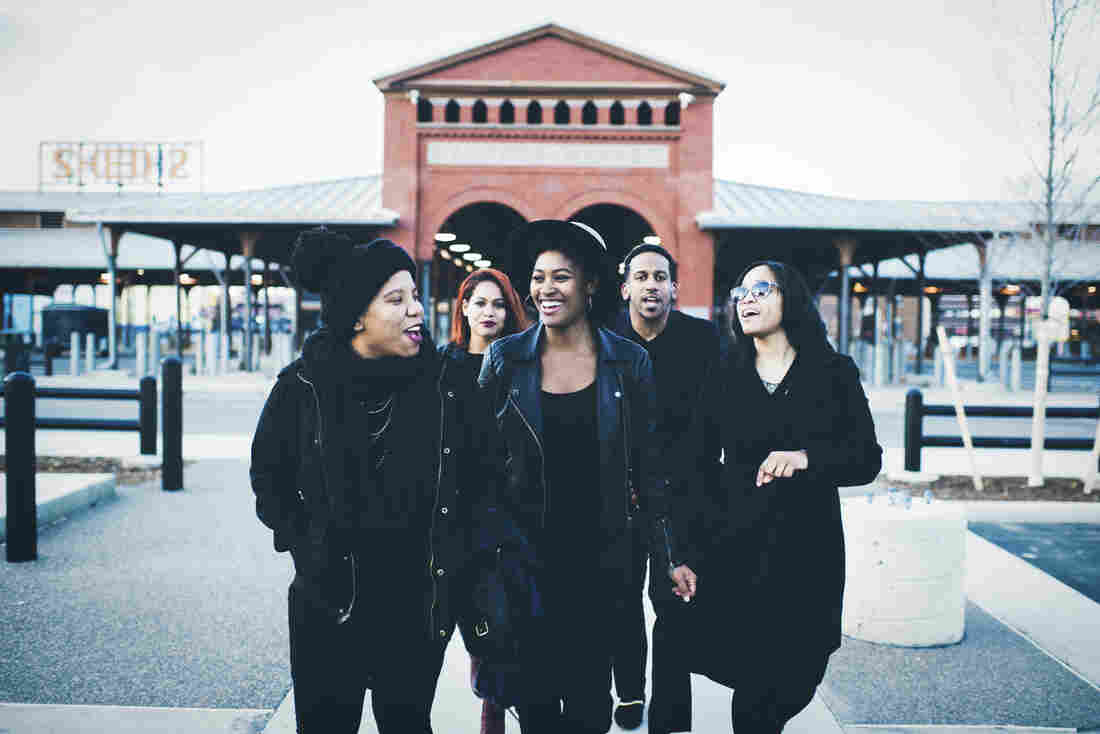 Paige Watkins (from left), Sarah Johnson, Camille Johnson, Chris Turner and Devon Porter stand in front of Detroit's Eastern Market. They are all contributors to Black Bottom LLC, a project committed to recapturing the vibrancy of the Black Bottom community. Courtesy of Justin Milhouse hide caption 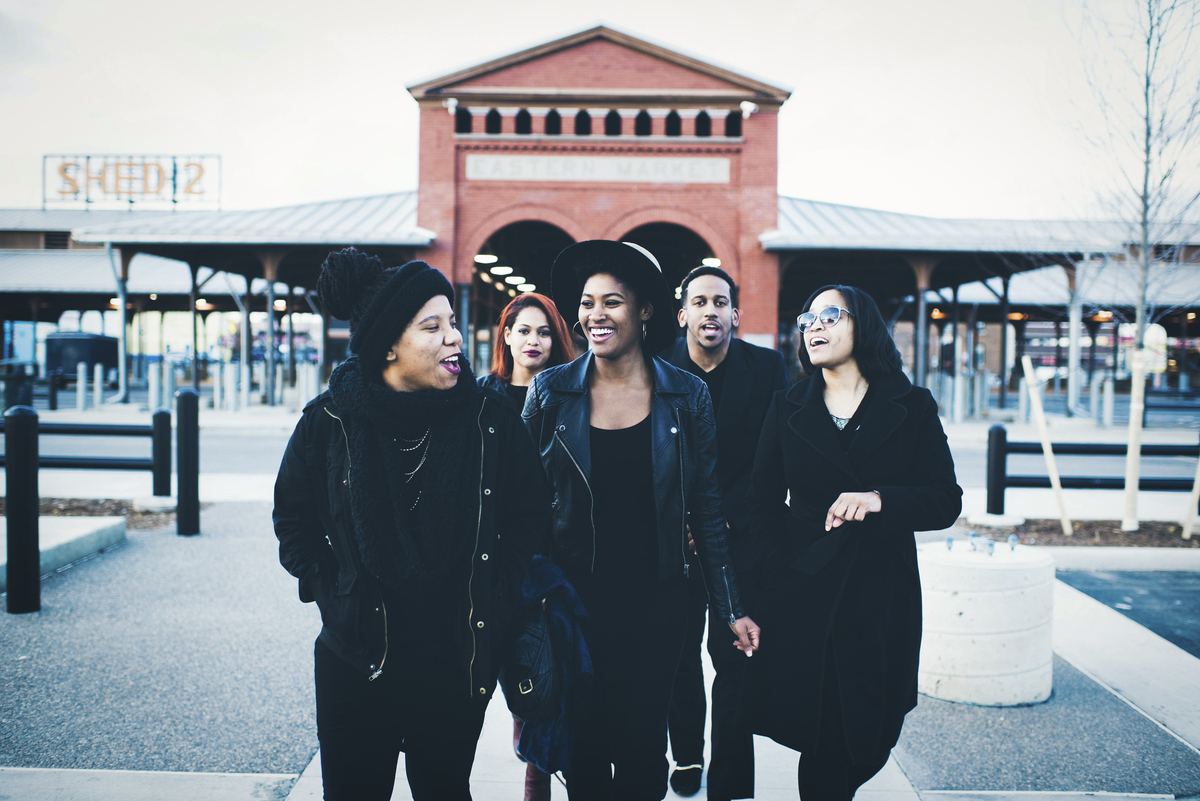 Paige Watkins (from left), Sarah Johnson, Camille Johnson, Chris Turner and Devon Porter stand in front of Detroit's Eastern Market. They are all contributors to Black Bottom LLC, a project committed to recapturing the vibrancy of the Black Bottom community.

Unless you grew up in a black family with deep Detroit roots, I'm betting you've never heard of Black Bottom. It was a self-sustaining, all-black neighborhood that flourished on Detroit's eastern edge at the turn of the last century. It's largely forgotten today, replaced by a four-lane highway, but back then its mile-and-a-half main drag bustled with black-owned grocery stores selling produce from local black farmers. The soda fountain at black-owned Barthwell Drugs was always hopping with customers sipping on orange pineapple floats while their orders got filled. Billie Holiday, Langston Hughes, Sammy Davis Jr. and Jackie Robinson were guests at the Gotham Hotel, a hot spot for black film stars, blues artists and athletes who were often barred from the city's white hotels.

Fed by the Great Migration of Southern black folks moving north and west in search of a better life, the neighborhood was a vibrant black oasis despite cramped conditions, the poverty of its residents, and predatory landlords. In fact, over time, Black Bottom — originally named for its dark soil, back when the area was farmland — became an epicenter for black wealth in the region. According to one timeline of Black Bottom's history, in 1920 it contained most of Detroit's then 350 black-owned businesses, including "17 physicians, 22 lawyers, 22 barbershops, 13 dentists, 12 cartage agencies, 11 tailors, 10 restaurants, 10 real estate dealers, 8 grocers, 6 drugstores, 5 undertakers, 4 employment agencies, and 1 candy maker."

Black Bottom has been compared to Bourbon Street in New Orleans, and a resident from the glory days who still lives nearby swears it was "better than Harlem." But in 1954, the neighborhood was torn down in the name of urban renewal and beautification, replaced by I-375, the freeway I take to get to my parents' house on the east side of Detroit. Thousands of black residents were displaced into public housing projects, and soon, much of the accumulated black wealth from the Black Bottom neighborhood was lost. A generation of black youth began looking outside the city for opportunities. 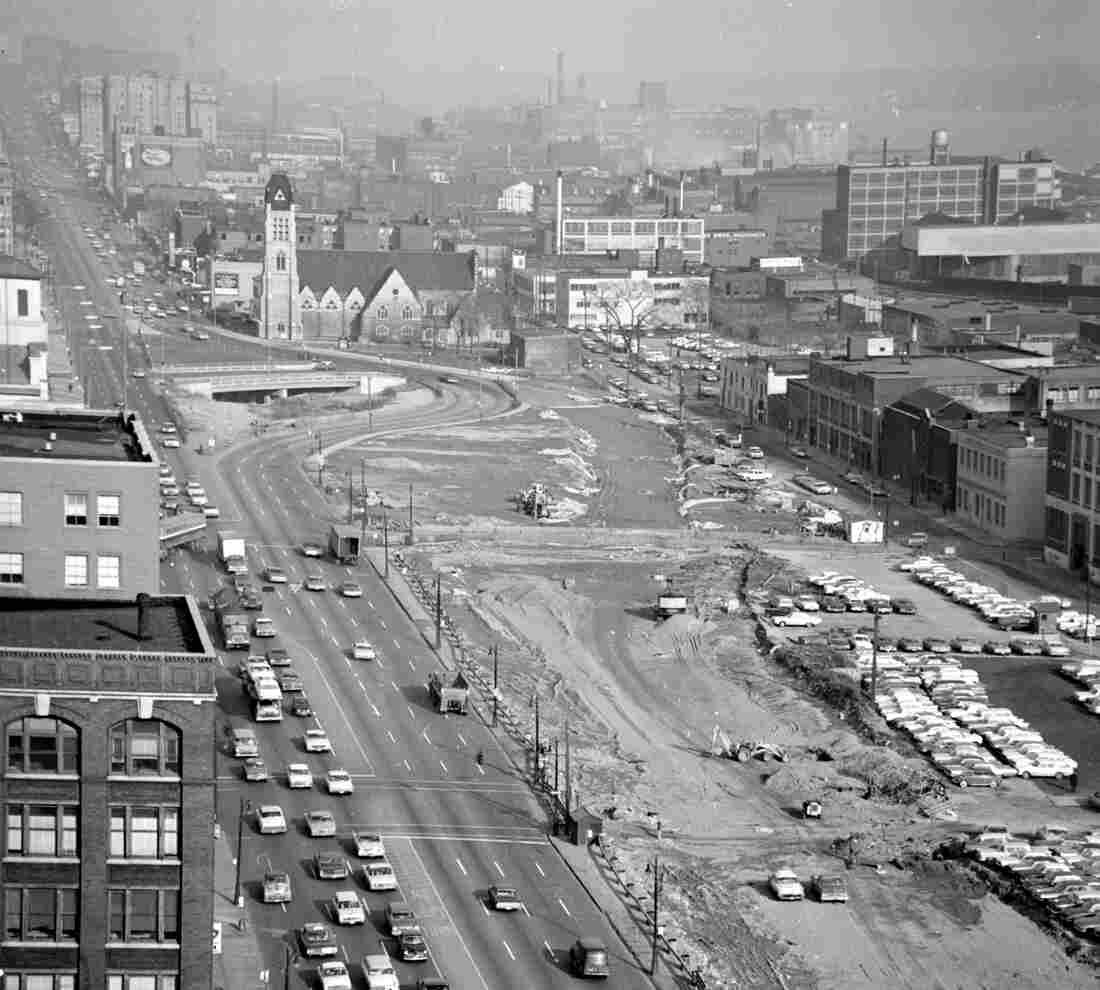 A view of the Chrysler Freeway in 1964, looking east from the roof of the City-County Building. Wayne State University hide caption

By the time I was growing up in Detroit Public Schools, my teachers encouraged me to get my degree and get out of the city in search of a better job. I moved away for college in 2011, and I was hardly alone. According to the Census Bureau, Detroit lost 30 percent of its black residents ages 18 to 35 between 2000 and 2010, about 60,000 people. Overall, Detroit lost a third of its population in those 10 years. And while numbers of white and Latino people living in Detroit have gone up slightly since then, a black exodus to the suburbs continues.

That's where an experiment called Black Bottom LLC hopes to come in. It's an attempt to introduce young black Detroiters — and beyond — to the story of Black Bottom, a story of black opportunity and black self-determination from an earlier time of upheaval and migration in Detroit. And it wants to try to recapture some of that momentum with an interesting digital gambit: a new Black Bottom for the 21st century.

This version of Black Bottom is a loose collective of community organizers, artists, writers and students, contributing articles to its online magazine about everything from healthful eating in Detroit to local politics, joining its Twitter "book club" to discuss books like Invisible Man and The New Jim Crow, running its weekly podcast, and contributing to its online photo gallery of black fashion, food, and art in Detroit.

The common denominator seems to be a desire to bring about a black renaissance in a city where undue emphasis ... has been placed on the ambitions of white hipsters and investors attracting headlines about who will 'fix' Detroit.

Black Bottom LLC was founded earlier this year by Paige Watkins, 22, and Camille Johnson, 25, black women who grew up in Detroit, attended its public schools and moved away for a few years for school and other endeavors. They both landed in Washington, D.C., after college and met up for brunch one day — their parents had known each other for years back in Detroit. They realized they both grew up hearing stories from older family members about the glory days of a neighborhood called Black Bottom. At some point, they decided they want to try to recapture some of what made Black Bottom so vibrant. They launched the website in January, along with the podcast, magazine and a curated directory of black businesses, entertainment, art, wellness and creativity in Detroit.

Watkins and Johnson say about a dozen people are currently in the Black Bottom LLC "family." The common denominator seems to be a desire to bring about a black renaissance in a city where undue emphasis, they feel, has been placed on the ambitions of white hipsters and investors attracting headlines about who will "fix" Detroit. Watkins says many black Detroiters are weary of outsiders coming in to "save the city from itself." "All it does is push me to do what I need to do to make sure that those people are not the people with a platform," she says.

Kevin Rigby Jr., 20, who grew up in Detroit, is a regular contributor at the Black Bottom Paper, the site's online weekly magazine about local arts and culture. The writers are all native Detroiters who currently live in the city or as part of the "Detroit diaspora." Rigby says learning about the physical Black Bottom — and its demise — makes the digitally housed Black Bottom LLC especially appealing because "it can't be demolished," he says. "There can't be a freeway [run] through an online community."

Painting The 'Epic Drama' Of The Great Migration: The Work Of Jacob Lawrence

And indeed, while the original Black Bottom was a physical space, so far, Black Bottom LLC is almost entirely online. But Watkins and Johnson have some meat-space ambitions, too. For starters, they're hoping to lease office space in the planned Detroitium Workspace. Right now, Watkins tells me, the group's members meet in libraries, coffee shops and their own living spaces. The founders are also trying to raise capital while working day jobs — Watkins interns at the James & Grace Lee Boggs School, and Johnson works at the Eastside Community Network. "We definitely want Black Bottom to be a full-time job for us," says Watkins, who dreams of Black Bottom LLC becoming a nationwide support group for black people. "We want to be a publishing company; we want to have schools. We want to do it all, but we're starting [on a] smaller scale and watching how it will grow."

For Johnson, who's also in law school, the topic of Black Bottom hits close to home. Her grandmother was a longtime resident of the neighborhood before it was torn down and had lots of fond memories. "She would always talk about how she won a car when she was 16 in a raffle in Black Bottom, and it was like the whole street's car. Everybody got to use it."

Johnson wishes she could have experienced her grandmother's neighborhood back in its heyday. She hopes more young black people will hear about the original Black Bottom through Black Bottom LLC and be persuaded to either stay in Detroit or consider moving there, breathing new life into a city many figured was a long-dead horse.

Will Black Bottom LLC succeed in its mission of helping persuade young black Detroiters — like me — to stay in the city and put down new roots? It's too soon to say, but Johnson has a request for the older generation: Stop telling us to leave. "Encourage our generation to stay in the city," she says. "People our age will have great ideas about how they can start a business here, but people don't want to give resources to young black people. They want to give resources to young white people because they get the backing of bigger investors. When the older black community invests in young black people, I think it makes the brain drain much less likely to happen."

Will Black Bottom LLC succeed in its mission of helping persuade young black Detroiters — like me — to stay in the city and put down new roots?

To that end, Johnson and Watkins want to connect with older Detroiters who used to live and work in the original neighborhood. Sidney Barthwell Jr., 67, grew up in the Boston Edison district of Detroit, and his father, Sidney Sr., ran Barthwell Drugs, a pharmacy and soda fountain in Black Bottom. Sidney Jr., who still lives in Detroit, remembers working for his father in the summertime, delivering ice cream to black patrons across Detroit. In any black family in Detroit at the time, he says, there was bound to be someone who either worked for or knew someone who worked for Sidney's dad. "He was a big employer in the community." Sidney says that at its prime, the business grew to nine stores employing about 500 people.

Sidney hadn't heard of Black Bottom LLC, and when I told him about it, he was surprised that young people were connecting with a forgotten piece of Detroit that meant so much to him growing up. He was sure, he says, that "the younger generation is woefully unknowledgeable about African-American history generally, and the young black population in Detroit knows nothing about the history in Detroit." But he says the resurrection of his old neighborhood — at least in digital form — has convinced him otherwise. "I wish them well. I'm glad that they're trying to do something. Anything is better than nothing."

Kinsey Clarke was Code Switch's summer 2015 intern. Her most recent piece for Code Switch was about a growing Black Lives Matter movement in Toronto. She's now a freelance writer; you can follow her work on Twitter.