Accessibility links
With Its 100th Episode, Larry Wilmore's 'Nightly Show' Has Found Its Voice : Code Switch The self-deprecating host of Comedy Central's The Nightly Show says it took a few months to get comfortable in his new role. "People are holding your feet to the fire immediately," he says. 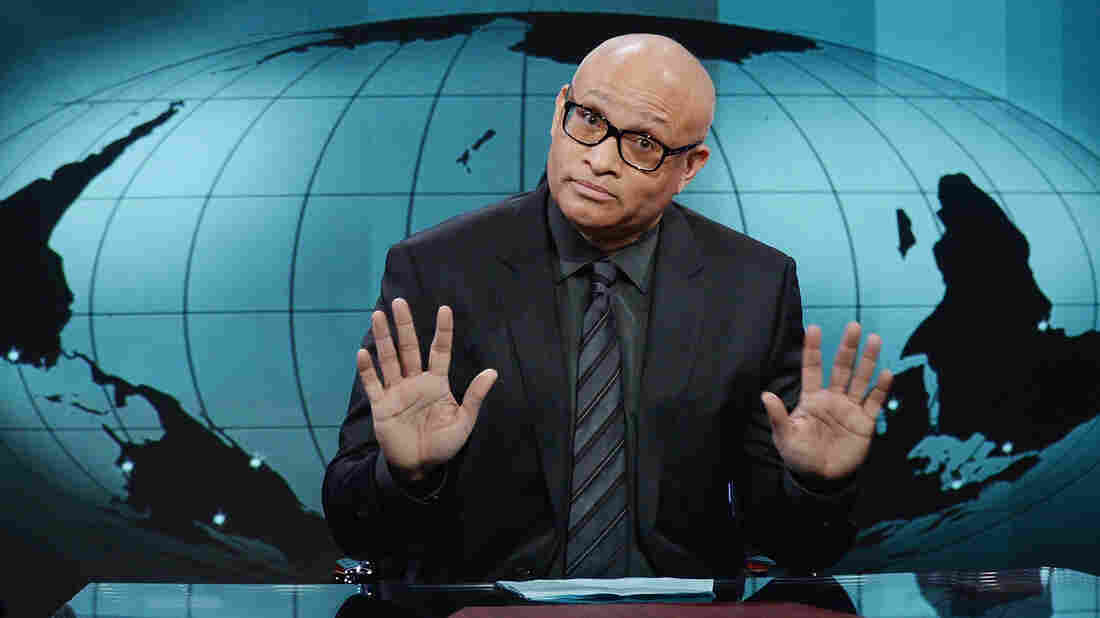 Larry Wilmore is the host of The Nightly Show, a satirical news show that airs on Comedy Central. Stephen Lovekin/Getty Images hide caption 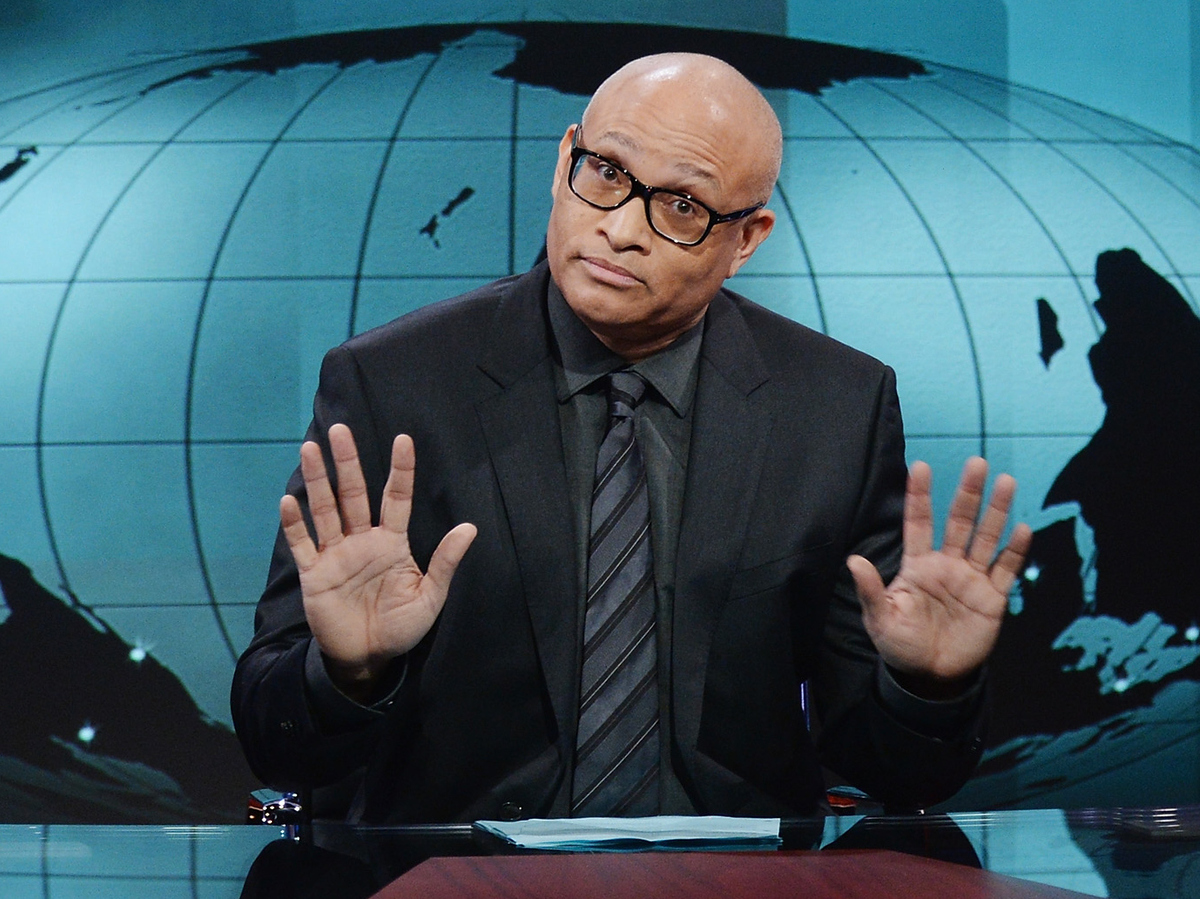 Larry Wilmore is the host of The Nightly Show, a satirical news show that airs on Comedy Central.

Though Larry Wilmore had always hoped to be a performer, his early career was as a comedy writer. He wrote for shows like The Fresh Prince of Bel Air and In Living Color, and created The Bernie Mac Show. He moved in front of the camera as The Daily Show's "senior black correspondent" in 2006. So when Stephen Colbert ended The Colbert Report last year, Comedy Central tapped Wilmore to host the replacement show.

The Nightly Show premiered in January. In the beginning, Wilmore struggled to hit his stride. "People are holding your feet to the fire immediately," Wilmore tells Fresh Air's Terry Gross. "It was so difficult those first couple of months. I mean, you're just in the middle of the storm, just trying to figure out how to do the show."

Wilmore is a self-proclaimed nerd — and proud of it. He practices magic, loves space and cites Woody Allen and Monty Python among his comedy influences "It used to be that the black comic figure had to have this bravado and always showed strength," he says. "Now there's a comic figure where it's okay to just be a nerd and be black."

He brings that sensibility to The Nightly Show, where he has to find the comedy and the outrage in the often tragic events of the day. When it comes to the incidents of violence between police and African-Americans that have dominated this year's headlines, the host is unequivocal: "The fact that we live in a world where black people have to strategize so they're not brutalized by police is insane," he says.

The biggest thing he said in the beginning — and he would almost say it with, not really anger but maybe frustration — he would say, "Hey man, stop being a host. Stop it. Just be yourself." It took a while for me to interpret it, but what it is, when you're first starting a show like that, you're acting everything because you're not comfortable yet. But you can't fool Jon. He can see right through that.

So no matter how much praise I got about the show, Jon's like, "No, no, no. You're pretending this right now. You're not owning it yet. You got to own it. You got to put your opinion out there, and you got to just get inside there and just be it." After a while, I understood what he was talking about. He was always encouraging me to raise the bar, not just in content but in making sure that my point of view was very clear and very precise and that I owned it and that I was myself. He kept pushing me into that. So that was the evolution of the show, to be honest with you. It all centered around that.

I've never thought of myself as any advocate for anything, but I remember about 10 or 11 years ago I joined ... the Board of Directors for the Writers Guild of America, and I thought, "You know what? I've had a good career as a writer, I should really give back." But I thought, "I'm not particularly passionate about anything," but I realize many times when you show up for something you find where your passions are, even if you don't know it, and it was fascinating to me.

I realized how passionate I was about so many issues, and I didn't even know it, because the issues presented themselves to me and I had to declare where I stood. So I ended up fighting a lot for writers in certain situations, underrepresented writers, women in certain situations. I didn't even know how much of a feminist I was, and I realized, "Oh my god, I was raised by a single mom who had to raise six kids. I have three sisters. Larry, you've been a feminist your whole life, and you really didn't know it until you've been presented with these issues."

I think me being an ally for women's issues is probably the most important thing that I feel I'm doing on the show.

It was the Cosby issue that made me realize how much I really cared about women's issues and how much I realize it's important for me to be an advocate for issues that aren't necessarily my own, to be an ally for issues. I think it's one thing to be for your own issue and owning your own issue ... but I think it's also important to be an ally for an issue. If the race stuff, if all that stuff is funny, even if that went away, I think me being an ally for women's issues is probably the most important thing that I feel I'm doing on the show.

On being a "blerd," a black nerd

For me it's just kind of who I am. I grew up doing magic tricks, but I also played sports. I'm still a magician. I'm a member of the Magic Castle in Hollywood, which I'm very proud of. I've performed there in the close-up room. I always have my cards with me. I'm always practicing. I'm always doing tricks, and that's kind of the nerdiest thing that I do — like I'm a space nerd. I love anything about space. If we're going to Mars, I'll have to stop everything and just talk about that all the time.

I'm actually working on a show for HBO right now I helped develop. We started a couple of years ago with Issa Rae, and she did a web series called the Misadventures of Awkward Black Girl, and it's the same type of idea where I'm black and I'm awkward — I'm not black and sassy — I'm black and awkward as an idea. I think it's just how things evolve, that we find different ways to express and to laugh and that type of thing.

On the origin of his self-deprecating humor

I was formed by Woody Allen, by the Marx brothers, by Monty Python, so many different types of influences. I always said I was more formed by, I think, Jewish American comedy than I was black American comedy when I was growing up. So the self-deprecation ... that's where it lives. ... I identified with that very early on. It was just more of who I was.