Accessibility links
How Shows Like 'Will & Grace' And 'Black-ish' Can Change Your Brain : Code Switch Go ahead, use this article to justify binge-watching Orange Is the New Black all weekend. 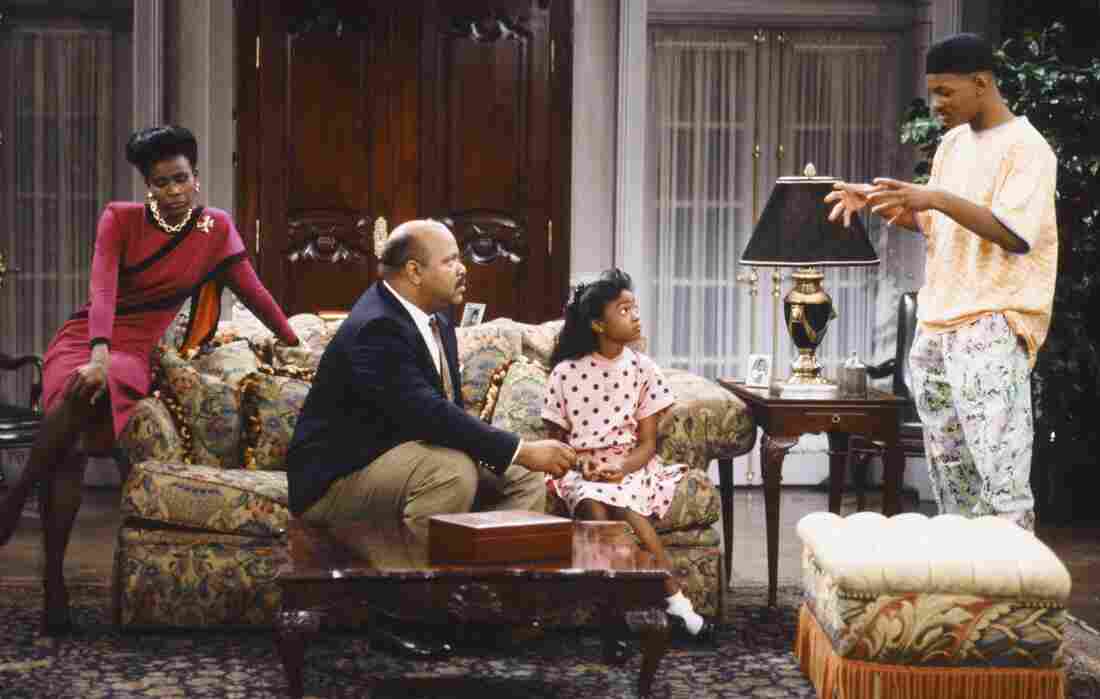 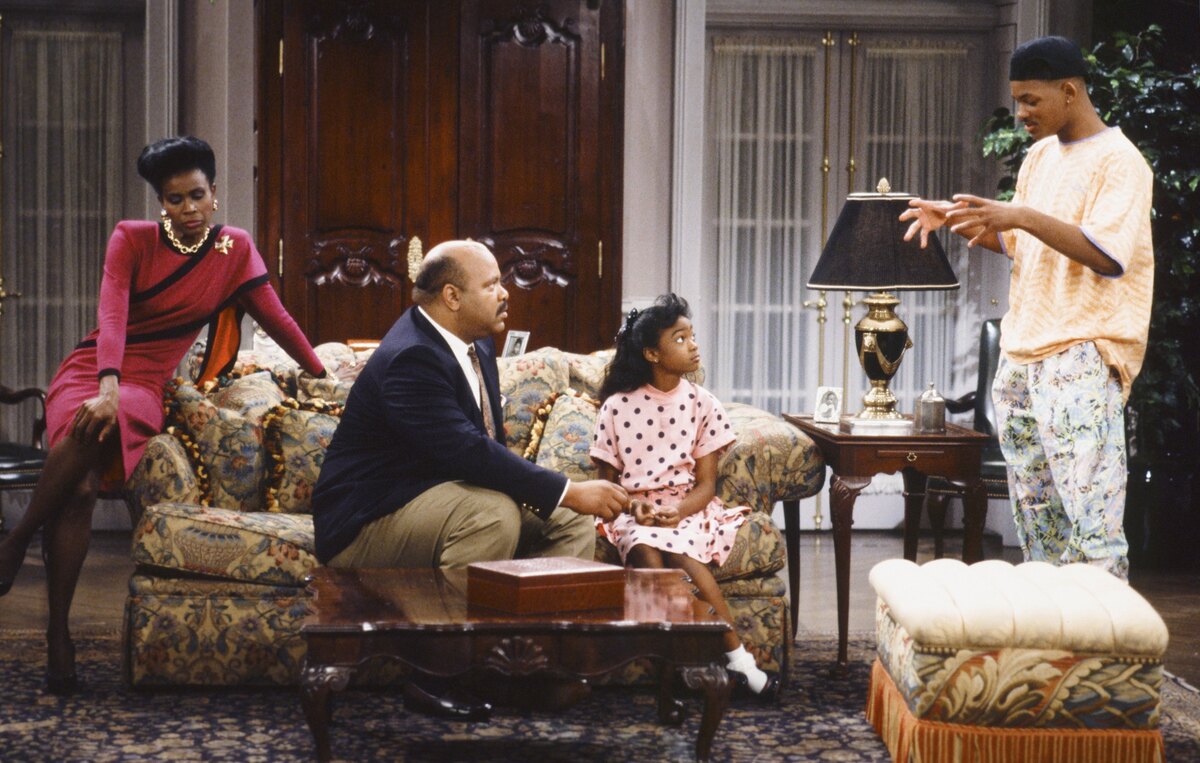 Janet Hubert (left), James Avery, Tatyana Ali and Will Smith in the first season of Fresh Prince of Bel Air.

Will Smith from The Fresh Prince of Bel-Air was my first American friend. Ours was an unlikely friendship: a shy Indian kid, fresh off the boat, with big glasses and a thick accent, and a high school b-ball player from West Philadelphia, chillin' out maxin' and relaxin' all cool. And yet, I was with Will all the way, unnerved when he accidentally gave Carlton speed, shaken when he got shot in Season 5, and deeply embarrassed every time he wiped out in front of Veronica.

Psychologists say it's not uncommon to think of fictional characters as your friends. They call these attachments parasocial relationships, and a growing body of research suggests there may be more to these connections than we realize. It turns out that as we grow emotionally attached to characters who are part of a minority group, our prejudices tend to recede.

It was rare to encounter black people where I lived in Mumbai. When my family moved to the States, we settled in a neighborhood of mostly white and Asian families. The Banks family on Fresh Prince was the first African-American family I felt like I "got to know." Of course, these were highly stylized, focus-group tested, fictional characters. But could it be that watching a show like Fresh Prince helped mold my broader world views?

That's the sort of thing Edward Schiappa, a media studies researcher at MIT, wanted to figure out. He looked into whether shows that prominently feature gay men could lower prejudice toward LGBTQ people. He and his colleagues surveyed people who watched Will & Grace, measuring whether or not they agreed with statements like "Sex between two men is just plain wrong" and "Lesbians are sick." Sure enough, Schiappa found that those who watched the show most often were least prejudiced toward the queer community.

But how do we know the show was really behind the responses? What if Will & Grace simply attracts viewers who were already open-minded about sexuality? To test that, Schiappa and his colleagues rounded up 175 college students and assessed their attitudes toward the LGBTQ community. Then, the researchers had all the students watch a season of Six Feet Under over the course of five weeks. When the researchers surveyed the students afterward, the students felt more positive toward gay men. Another study on the effect of watching Queer Eye for the Straight Guy yielded similar results. "At this point, it's a pretty unequivocal finding that TV can affect how people feel and think about others," Schiappa says.

What's more, these findings square with the way people overcome prejudice in the real world. Psychologists have consistently found that the most effective way to rid people from majority groups of bigoted ideas about, say, black people, immigrants or queer folks, is to have them interact with people from those groups. They call it the intergroup contact theory: When majority and minority groups mingle — under the right circumstances — negative feelings about each other tend to dissipate. "What happens when you're exposed to a wide variety of people in a certain minority group is that your ideas about that group get more complicated," says Schiappa.

So does this mean we can eradicate racism and homophobia through a series of strategic dinner parties? Not quite. Back in 1954, psychologist Gordon Allport found that the intergroup contact theory holds true only when everyone in a social situation feels safe, comfortable and respected. In the real world, if we were to round up a few proud homophobes and lock them in a room with a bunch of queer folks, it would probably look something like, well, MTV's The Real World. 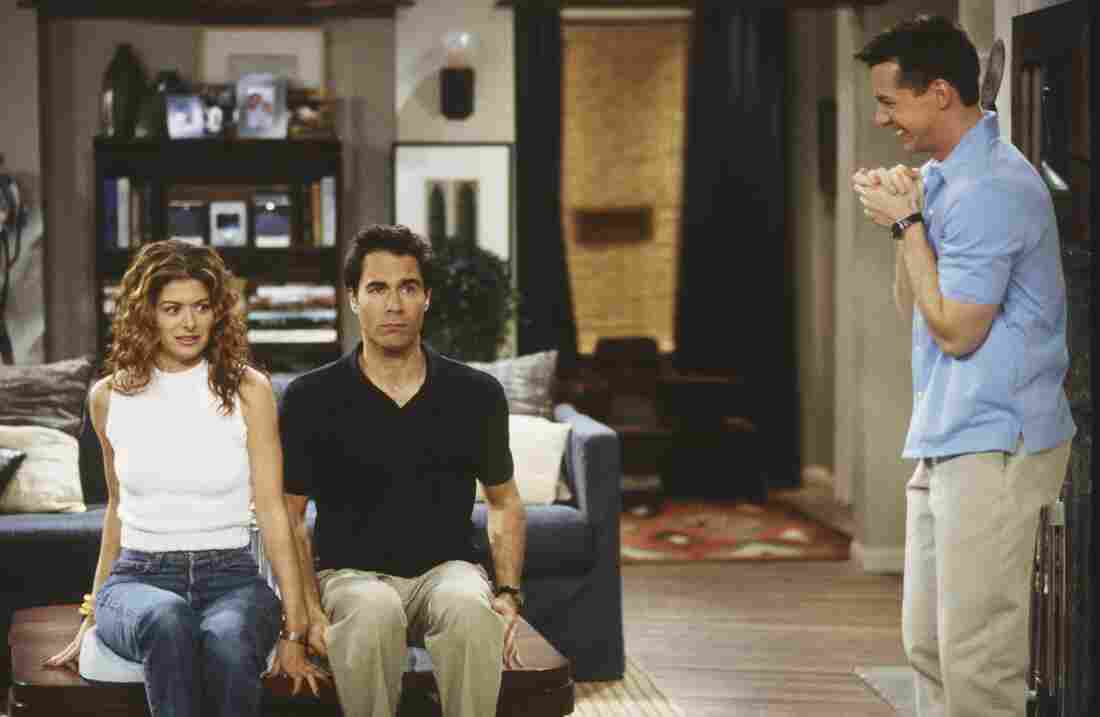 Debra Messing, Eric McCormack and Sean Hayes in a scene from Will & Grace. Chris Haston/NBC via Getty Images hide caption 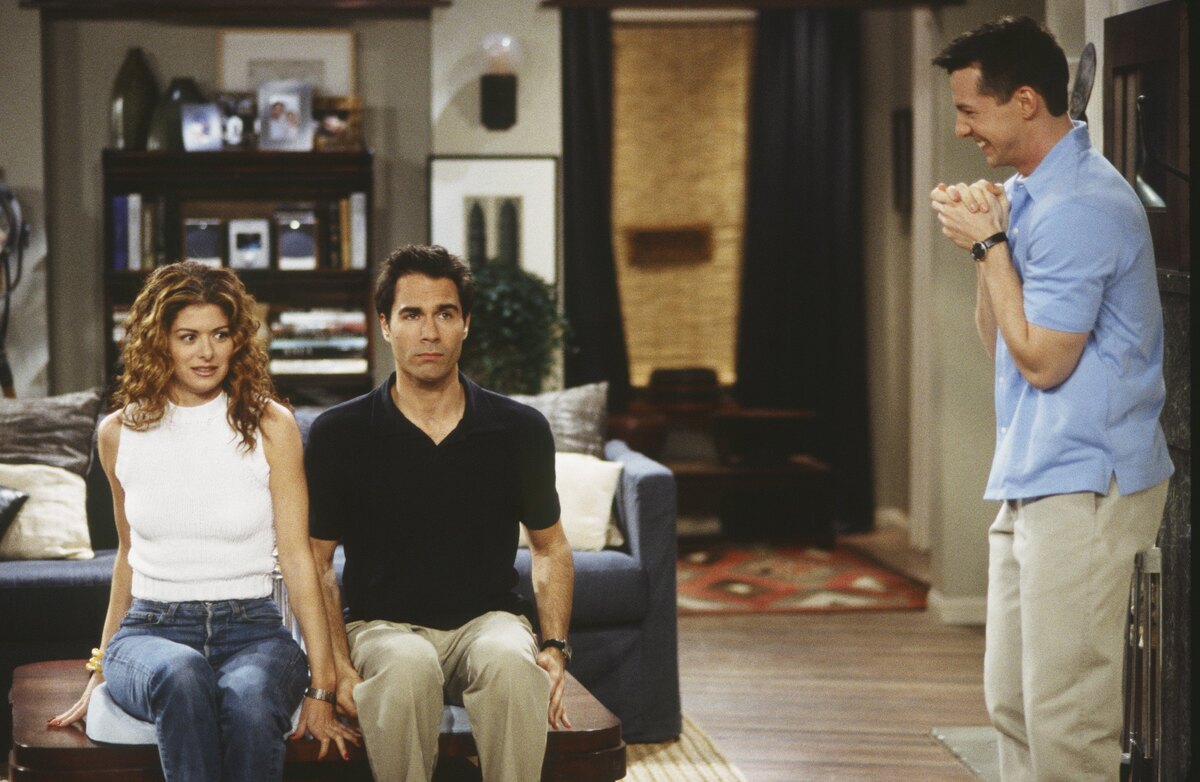 Debra Messing, Eric McCormack and Sean Hayes in a scene from Will & Grace.

In the first season of that show, which debuted in 1992, the producers brought together a disparate group of 20-somethings and encouraged sparks to fly. Julie, the Southern belle, offends Heather, a black rapper, by joking about how she could be a drug dealer. Eric, the white dude with boy-band hair, has a blowout with Kevin, who's black, after Eric insists that white privilege isn't a thing. None of this was accidental; as the intro to each episode says, the goal is — say it with me now — "to find out what happens when people stop being polite, and start getting real."

"People can feel immediately put off or threatened when they meet someone they don't normally interact with," Schiappa says. "And that can sometimes even increase prejudice." In the real real world, most people tend to hang out with others who look and think like them. Last year, a big survey by the Public Religion Research Institute found that most white Americans have just one black friend, one Latino friend and one Asian friend — overall, 91 percent of their friends are white. And the social circles of African-Americans were 80 percent black.

"It's not easy to get different types of people to just organically become friends," Schiappa says. So how do you get the benefits of intergroup contact theory in a socially segregated world? That's where television and my good friend the Fresh Prince come in.

Media researchers say it counts for something that on TV, we can meet all sorts of people who may be nothing like us: a cancer-stricken chemistry teacher desperate to pay his medical bills, a 10-year-old Chinese kid who loves hip-hop, a black woman with a high-powered political career, or a couple of gay men raising a daughter they adopted from Vietnam. "When I really get into a TV show, I start to feel like I know the characters," says Bradley Bond, an assistant professor of communication studies at the University of San Diego. "These characters almost become my friends."

And Bond says it's easy to connect with them precisely because they live inside your TV screen. "You meet these characters in the safety of your own home," he explains. The TV screen offers a sense of separation and security that can help people lower their defenses and connect with people they might try to avoid in real life. And as Schiappa's research has shown, that connection can lead to boosts in people's ability to empathize with people they might not otherwise relate to.

Of course, just because television can encourage acceptance and open-mindedness doesn't mean it always works out that way. "It's not enough to just have a diversity of characters portrayed on TV," says Srividya Ramasubramanian, an associate professor of communication at Texas A&M University. "How the minority characters are portrayed really matters." Often when minority characters are portrayed on-screen, she says, they're in demeaning roles. The Big Bang Theory is one of Ramasubramanian's favorite shows, but she bristles at the character of Raj, an Indian astrophysicist, who has a thick accent, overbearing parents and zero game. 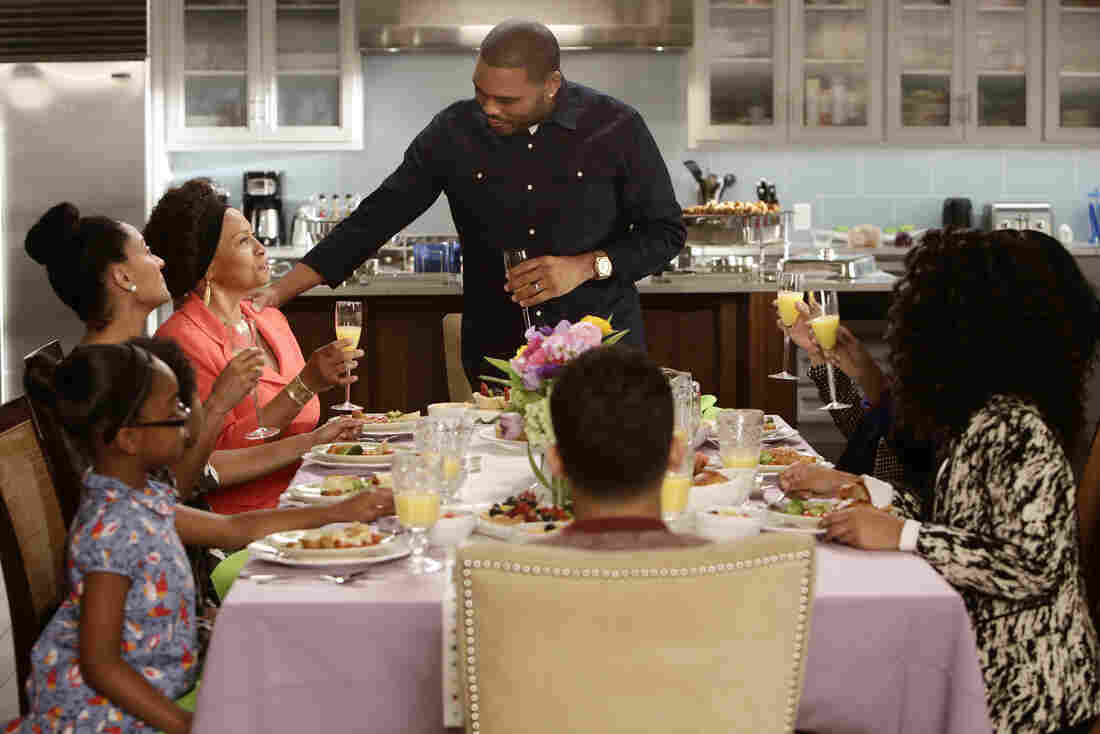 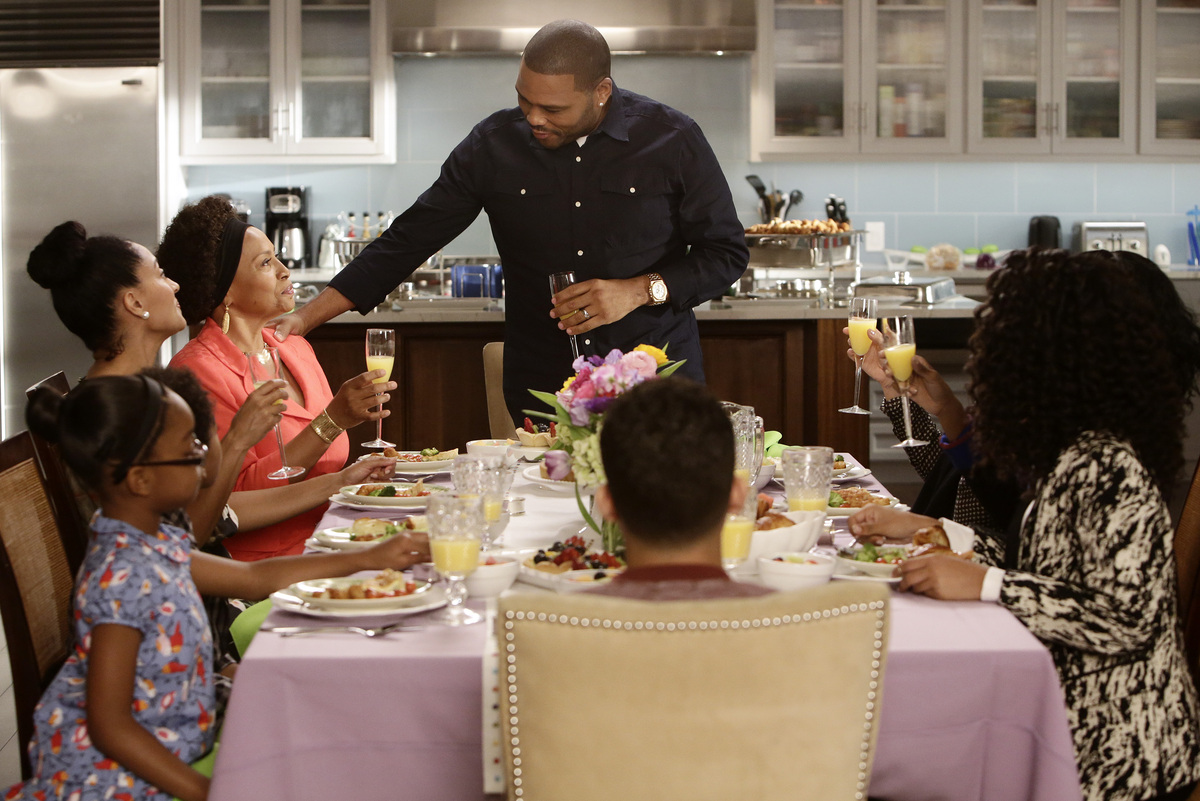 In her work, Ramasubramanian has found that those sorts of one-dimensional representations can actually reinforce prejudice. In a 2011 study published in Communications Research, she polled a bunch of college kids on whether they admired or disliked a bunch of widely recognized TV characters and personalities, some white, some black. In the results, David Palmer from 24 and Oprah were widely admired. Flavor Flav and The Apprentice's Omarosa were widely disliked.

Then, she rounded up a different group, composed of 450 young Caucasian people. She showed some of them pictures of the admired characters, and some of the disliked characters. Then, she put the pictures away and gave everyone in that group a survey measuring how likely they were to associate the words "lazy," "criminal" and "uneducated" with black people. It turns out that being exposed to the lesser-liked black characters made people more likely to associate negative stereotypes with black people, and less likely to support affirmative action policies.

As researchers begin to understand more about how TV can both advance and regress our ideas about race and sexuality, the challenge, Ramasubramanian says, is convincing mainstream TV networks that a diverse set of well-rounded characters can make for popular — and profitable — entertainment. She says highly rated shows like Black-ish, Orange Is the New Black, Scandal and Fresh Off the Boat are a start. But there's still work to be done. That's why, in 2013, she founded Media Rise, a nonprofit group that aims to connect the folks behind the camera with social scientists, teachers and activists. The idea is that bringing these people together will result in socially aware television that's also highly rated.

Winning over network bigwigs is the challenge, says Brad Bond, the social psychologist at the University of San Diego. "The media industry has become more concerned with what we refer to as social responsibility," he says, but as NPR's Linda Holmes recently pointed out, that has yet to translate to widespread diversity on-screen or in writer's rooms. "Our discipline is still trying to figure out how not to just preach to the choir," Bond says, and "translate the research into actual change."