Accessibility links
Remember When You Had To Flip To The Back Page Of 'Jet' To Find Black People On TV? : Code Switch This year's Emmy broadcast highlighted some big demographic and technological shifts staring everyone in the face — and encapsulated how much the centers of gravity in the TV landscape had shifted.

Remember When You Had To Flip To The Back Page Of 'Jet' To Find Black People On TV?

Remember When You Had To Flip To The Back Page Of 'Jet' To Find Black People On TV? 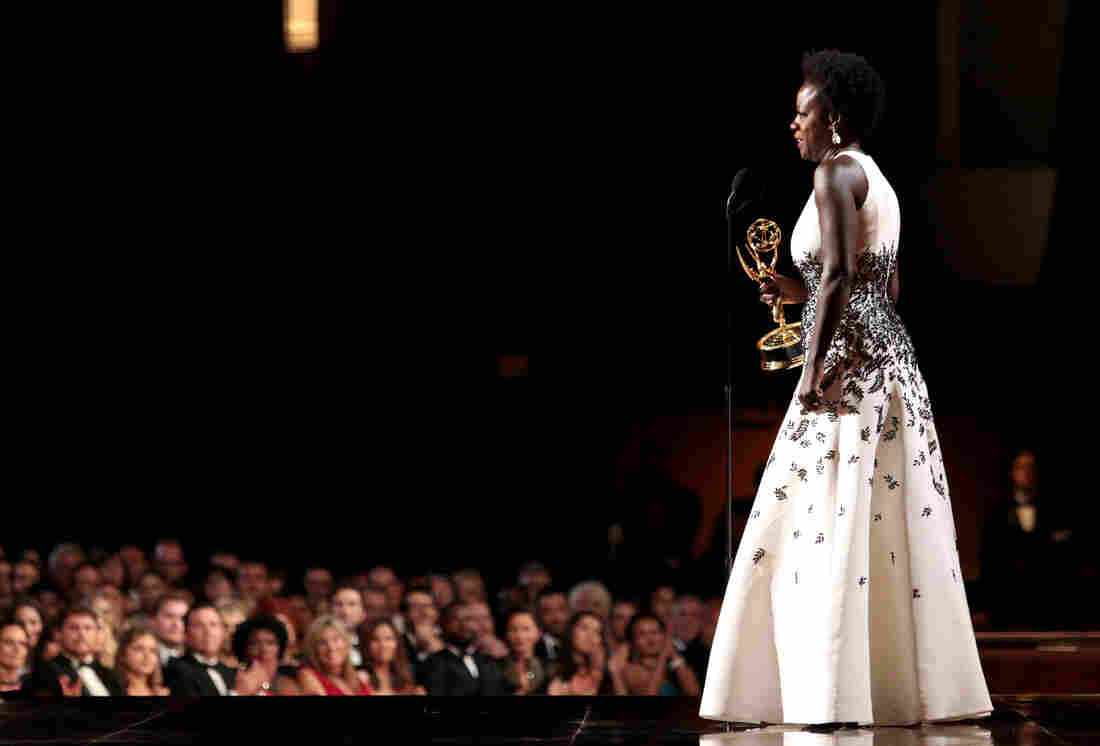 Viola Davis accepts the award for outstanding lead actress in a drama series for How to Get Away With Murder at the 67th Primetime Emmy Awards on Sept. 20. Alex Berliner/Invision for the Television Academy/AP hide caption 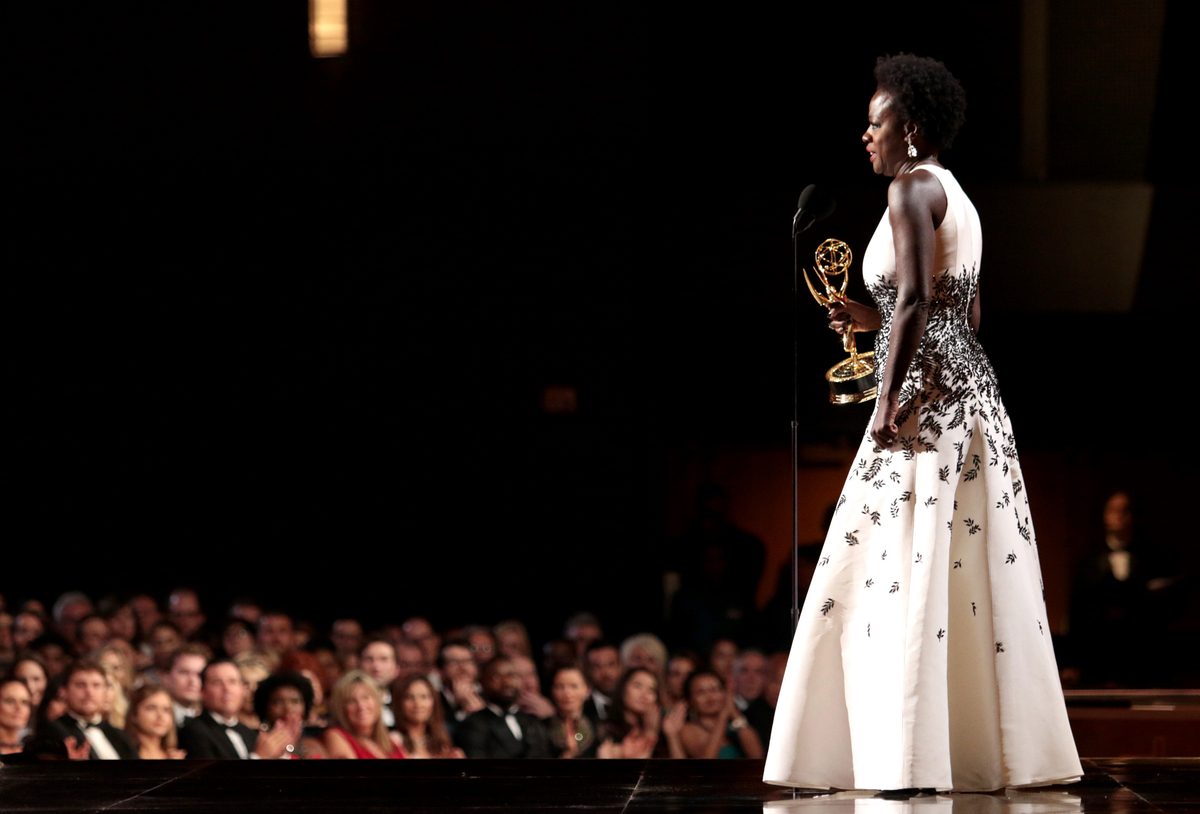 Viola Davis accepts the award for outstanding lead actress in a drama series for How to Get Away With Murder at the 67th Primetime Emmy Awards on Sept. 20.

Back in the heyday of Jet magazine, that weekly digest of short, fizzy articles about black life, there was a back-page feature simply called "Television." It was a no-frills rundown of nearly every black person who would be appearing on prime-time TV over the coming week, just their names, which show and what time. It included starring roles — Sherman Helmsley on The Jeffersons and Marla Gibbs on 227 — but also the fifth lead on an ensemble drama like Hill Street Blues and the most debatably notable of guest stars. If Ben Vereen was going to pop up for three minutes on CBS on Tuesday night, "Television" was going to let you know.

For a whole lot of families — mine included — reading that back page was a weekly convention. Clarence Page, the revered newspaper columnist, said back in 1990 that the "Television" page was a lifeline for his family growing up. "Ask any black person who was growing up then — it was so rare to see another black person on television that when it would happen, somebody in the house would yell out, 'There's somebody colored on TV!' " he said. "If Nat King Cole was on Ed Sullivan's show, we would all rush to the TV set." 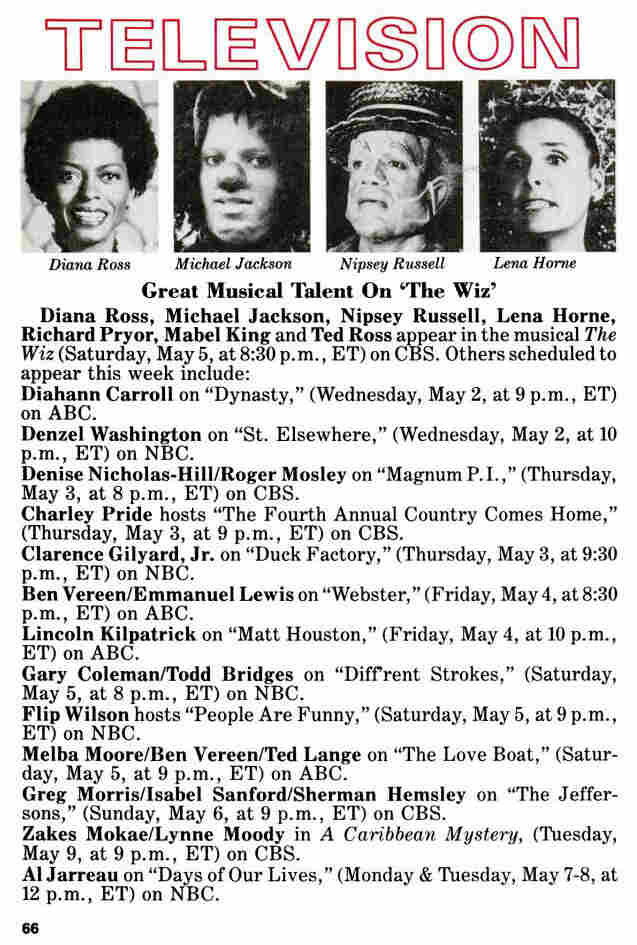 A page from the May 7, 1984, issue of Jet, featuring the "What To Watch" portion of the magazine. Jet hide caption

In that same article, Robert Johnson, Jet's publisher, said that "Television" used to be hard to fill, even on Jet's tiny pages. "There was a time, when we first began the TV page, when we couldn't come close to filling it," he said. "There weren't enough blacks in a given week to fill the page. So we would list all the blacks and then fill all the remaining space with the blacks who would be appearing on radio." Readers, Johnson said, would clip out the page and put it next to their TV sets.

"Television" scratched a couple overlapping itches: a way to see black folks on the small screen, and a way to signal to the TV networks that this audience existed. I went to a mostly black day care in Philly in the mid-'80s, and every Friday morning, the ladies who ran the place sat us down in a circle to quiz us on what happened on The Cosby Show the night before. We were all of 5 years old, but I think we got the message — "The Cosbys," as they called it, was more than just a funny show. We had a social responsibility to show up for it.

I bring this up now because of last Sunday's Emmy ceremony, which looked so markedly different from any Emmy broadcast anyone can remember. The whole thing played like a banner night for black folks on TV (even though, as we've written before, the network TV schedule is less black today than it was in the '90s). A grip of black women — Uzo Adubo, Viola Davis, Regina King — won major acting awards. Taraji P. Henson did her usual hydrant-of-charisma thing as a presenter, with the perpetually odd Terrence Howard in tow. Tracy Morgan, who nearly died in a gruesome highway accident last year, made it onstage to present an award. And of course, there was Davis' Harriet Tubman-quoting acceptance speech.

Clearly, a lot had changed in the TV landscape since the days of "What To Watch," when preschool aides nudged a bunch of 5-year-olds to help uplift the race by watching the Huxtables give Rudy's goldfish a funeral. Sunday's Emmys represented some big demographic and technological shifts staring everyone in the face and encapsulated just how much the centers of gravity in the TV landscape had shifted.

So how did we get here? For one thing, black viewers watch way more hours of television each month than any other demographic. (And really, it's not even close.) And it's not just how much, but how they watch. In a Netflix-Hulu-DVR world where most viewers have abandoned as-it-airs, appointment-style viewing around a hit show — the type of captive audience that television advertisers love — black viewers have pretty seriously bucked that trend, turning a handful of black-led shows into "watch party" events on the scale of the Oscars or the Super Bowl.

Take Empire. As Josef Adalian pointed out in Vulture earlier this year, around 1 in 3 black households with TVs watched Empire's first season when it premiered in January. Among black female viewers between 35 and 49, Adalian wrote, "the show is literally the equivalent of a Super Bowl," with one episode "exceeding the rating of some NFL championship games this century."

More to the point, Empire killed among viewers ages 18 to 49 — the demographic most coveted by advertisers — and its viewers in that demo were solidly black. According to Nielsen, Empire averaged 11 million black viewers a week during its first season, which means that even if only black people watched the show, it still would have been a success. Its first season finale in March was the most-watched show on TV the week it aired.

Empire is a rarity, the kind of show whose audience keeps growing and whose audience tunes in to watch every episode live. And black folks are also famously overrepresented on Twitter, a fact that is probably obvious to anyone on social media when Empire and Scandal come on. Like "The Cosbys," these shows have become the kind of pop culture objects with which one needs at least a passing familiarity to be literate in mainstream discussions about not just black life, but TV in general.

As a viewer of both, I can tell you that watching and laughing along with millions of strangers is kind of central to the experience of these shows. Black folks show up and watch like it's a responsibility. Of course, it's also made those shows a prime target for advertisers — and increasingly important to the bottom line of the networks on which they air. (Empire was one of the rare bright spots for Fox this season; the network fell from second to fourth place, overall.)

In her much discussed acceptance speech, Davis noted the absence of roles for black actresses. The history here is pretty sorry: Prior to Scandal's premiere in 2012, a black woman hadn't been the lead of a network drama in the nearly 40 years since a cheesy, short-lived '70s cop show called Get Christie Love. That drought was especially notable because black women watch more TV each week than any other demographic. They had been showing up, with not a whole lot to show for it.

But now, Thursday nights, traditionally the most important weeknight of network television programming, boasts three shows with black women in lead roles: Sleepy Hollow on Fox, ABC's Scandal and Davis' How To Get Away With Murder. And on Sunday night, folks were arguing on social media about which black woman should have won the best sctress Emmy — Taraji P. Henson or Viola Davis. What a time to be alive.

Along with Davis' win, there was another moment during the Emmy broadcast that seemed to capture what's happened to the TV audience over the past few years. Apple ran a commercial for its new music service featuring Henson, Scandal's Kerry Washington, and Official Black Woman-Who-Has-Been-Through-It Avatar Mary J. Blige, singing and rapping and dancing along to old songs. It was a simple, fun ad, but the resulting joyous collective squeeeee — or YASSSSSSS, I guess — nearly melted Twitter. (It ran twice.) Unalloyed fan service? Certainly. But it also meant that the folks at Apple knew exactly whom they were talking to. 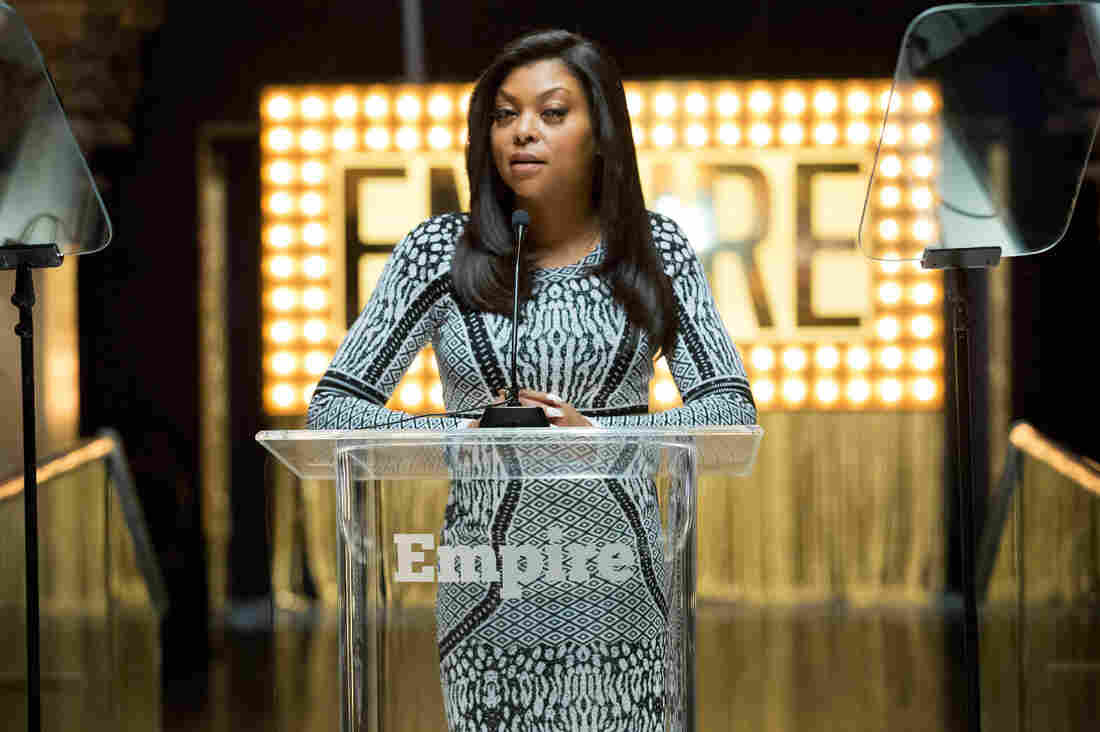