Accessibility links
Where Does The 'Pull Up Your Pants' School Of Black Politics Come From? : Code Switch The origins of "respectability politics" are more complicated than you might think.

Where Does The 'Pull Up Your Pants' School Of Black Politics Come From?

Where Does The 'Pull Up Your Pants' School Of Black Politics Come From? 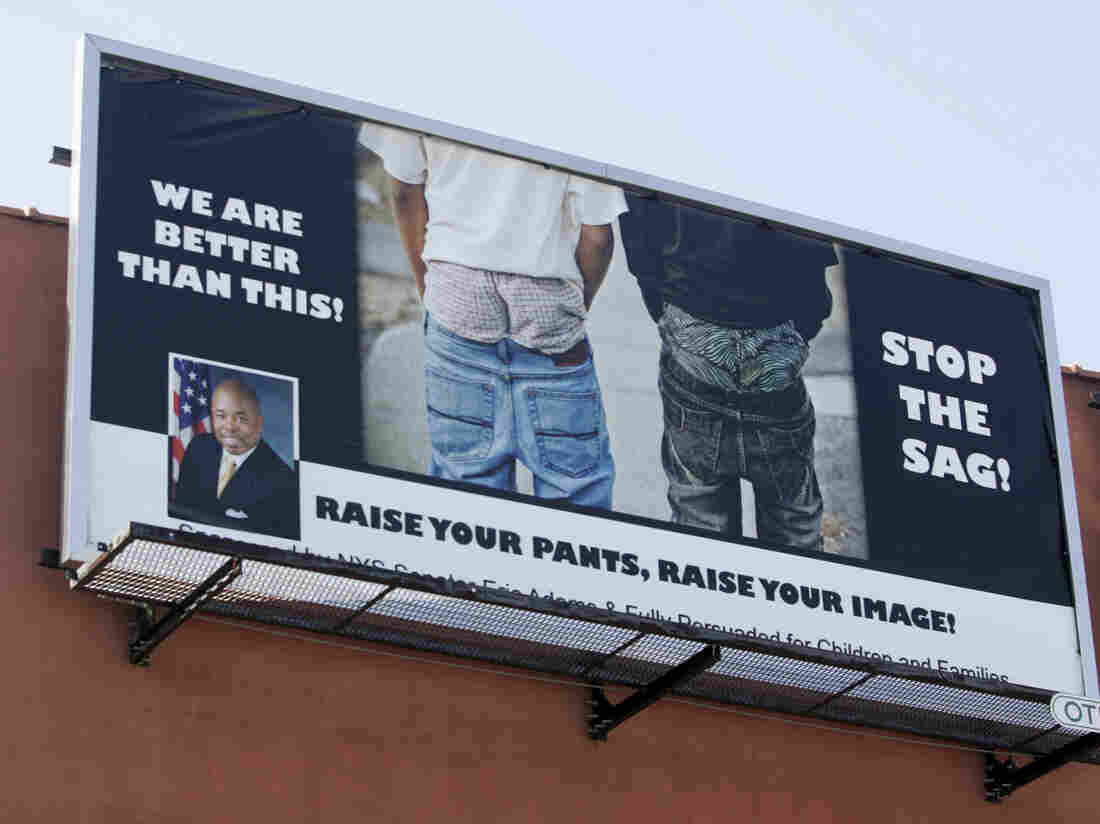 Plenty of fashions adopted by young people get under the skin of adults, but the opposition to sagging often has the feel of a moral panic. Robert Mecea/AP hide caption 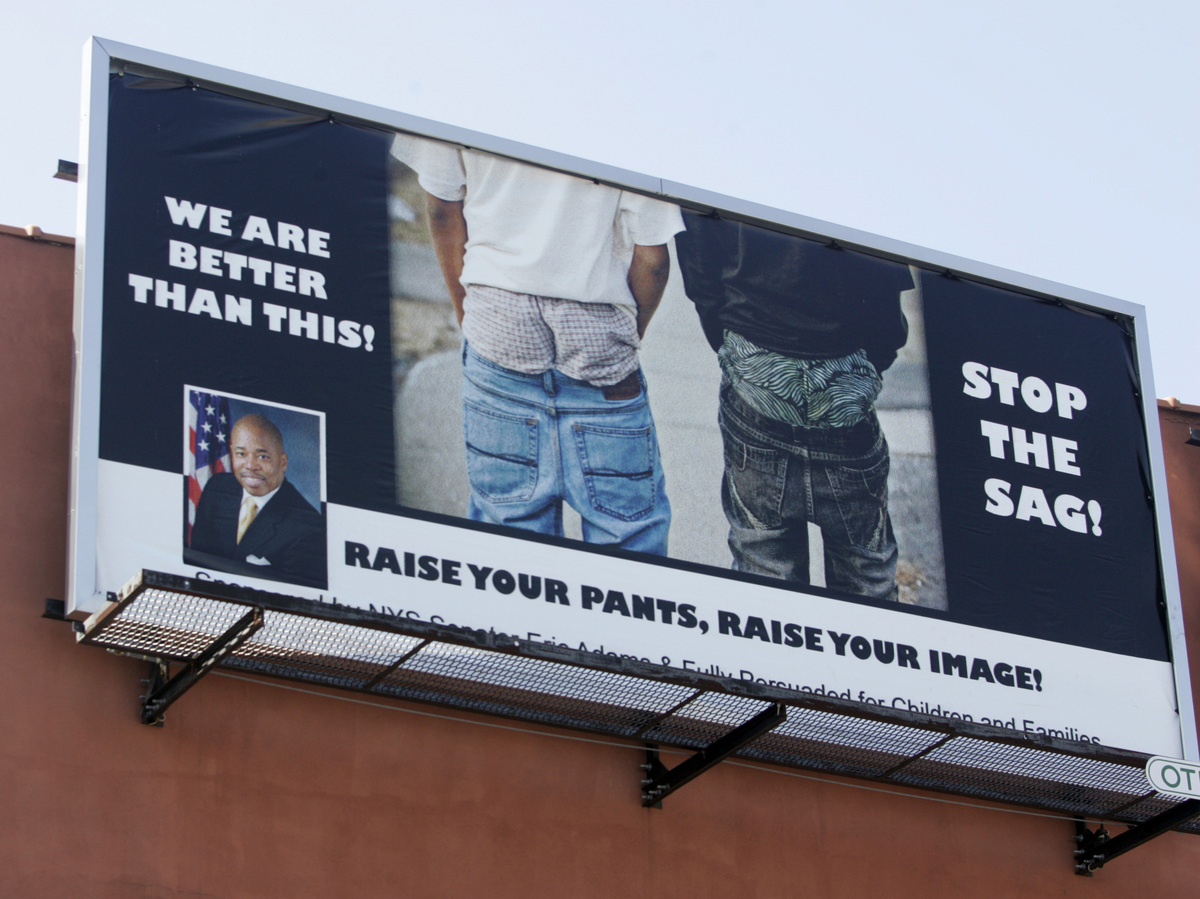 Plenty of fashions adopted by young people get under the skin of adults, but the opposition to sagging often has the feel of a moral panic.

Pull up your pants. Calm down. Get good grades. Stop the violence. Buy a gun. Fix your hair. Go to church. Have a normal name. Speak properly. Be polite. Put your hands up. Stop loitering. Go inside. Have a good job. Smile. Apologize. Don't shout. Try harder. Own a home (in the right neighborhood). Lose weight. Be braver. Do better. Don't move. Seriously. Stay. The heck. Put.

You know what we're wading into here: respectability politics, the notion that problems in the black community spume from within, and that by adopting a certain lifestyle, black people can inoculate themselves from discrimination.

So what is that "certain lifestyle"? We've been squabbling over the details for decades, centuries even. We debate the signposts of respectability, like saggy pants (bad) and college degrees (good). We negotiate the roles of religious institutions, conservative politicians, and parents. Less often, we talk about more polarizing topics, like criminal records and female sexuality.

For every pants-puller-upper, someone else will argue, convincingly, that despite what RP claims to be — a means of self-preservation — it's often used to rationalize racism, sexism, bigotry, hate, and violence.

This is all well-covered territory. But yesterday, on Twitter, one Code Switcher asked our lead blogger Gene Demby a startlingly simple question, one that got us thinking about RP all over again:

@GeeDee215 in your professional opinion, where do you think respectability politics stems from? I think perhaps religion.

It led to an hours-long conversation in which lots of you contributed really fascinating points about why to many, respectability politics is dissatisfying, at best, and sinister, at worst:

@jbouie @GeeDee215 @dfreelon i can't help solve the real problem affecting you until you appear perfect and innocent. Whatever that means.

@dfreelon @GeeDee215 Yep. And if you do get shot by the police, respectability politics demands that we find "what you did wrong."

@GeeDee215 @nerd_bigboy If you say prejudice can be overcome with good behavior, you concede its rationality. Easy sell to a white majority.

But in terms of where RP stems from, the answer is actually fascinating. One reader led us to this interview over at black feminist site For Harriet with Evelyn Brooks Higginbotham, the woman who first conceptualized the politics of respectability in 1993. The way in which Higginbotham used the term in her book, Righteous Discontent: The Women's Movement in the Black Baptist Church, 1880-1920, differs in some important ways from how the term is used today.

Your definition of yourself, the worth of who you are isn't determined in...contexts of racial discrimination. If you believe that you are worthy of respect and if you live a life that is worthy of respect, then nothing anybody else can say about you can define you.

This is really important because now what is a life worthy of respect?

She goes on to describe how her definition of respectability politics plays out in a modern context:

It is defiant. Don't get it wrong now. It's not that it's not defiant, but it's respectful. [Bree Newsome is] not going to be respectful of that Confederate Flag being up there [on the South Carolina State House], just as previous activists were not respectful of segregation. They are going to jail. They are risking their lives, see? This isn't something that is not defiant. This is definitely defiant of American law, of the segregation values in the nation, they're not trying to tiptoe along with it such that they'll be liked, such that they please the white man, that kind of thing. That's not what that's about.

It's about doing it in a certain way that when people see you, they see respect. For her to come down reciting scripture, for Christian people who look at that, they respect her bravery. If she come down with profanities, that would have had a totally different impact.

Many people criticize the way that the politics of respectability can be used to discredit political resistance if that resistance doesn't present a certain way. But Dr. Higginbotham calls for a more utilitarian approach to the idea:

Now one could argue, and I do argue, that the conservative side of the politics of respectability is that they demanded of black people certain types of behavior that weren't necessary for your rights. For example, for them, it would have been really important, and it's also true for the Civil Rights Movement, when they went to march they wanted to look clean cut. They wanted to look clean cut because they wanted people to see them and say, "These are the respectable people. Look at these people. They're not even different from us. Their cause is something that we can identify with." The problem, and this is the conservative side of it, the problem is that how they dressed should not interfere with their right to vote. The truth of the matter is white people can dress any kind of way in this day and have a right to vote.

There is a strategic use of it. I argue that it's what we call a bridge discourse, and this is another issue. Who are your allies? It takes me back to when you talk about an immoral society, but in any struggle you have got to have allies. We are not being honest if we think we don't need allies. You're talking to somebody who was in the Black Power struggle. It seemed so logical to me then, but the question that I needed to have been real clear about was what was my goal?

The entire conversation is worth taking a look at. And maybe this final tweet is worth ending on.

@dwhite10701 @GeeDee215 Know what's funny about this? Maybe I can do certain things to reduce my odds of getting shot. But what a burden!