Accessibility links
Startups Cater To Muslim Millennials With Dating Apps And Vegan Halal Soap : Code Switch Across the U.S., the Muslim population is booming, which spells opportunity for a new generation of Muslim entrepreneurs. 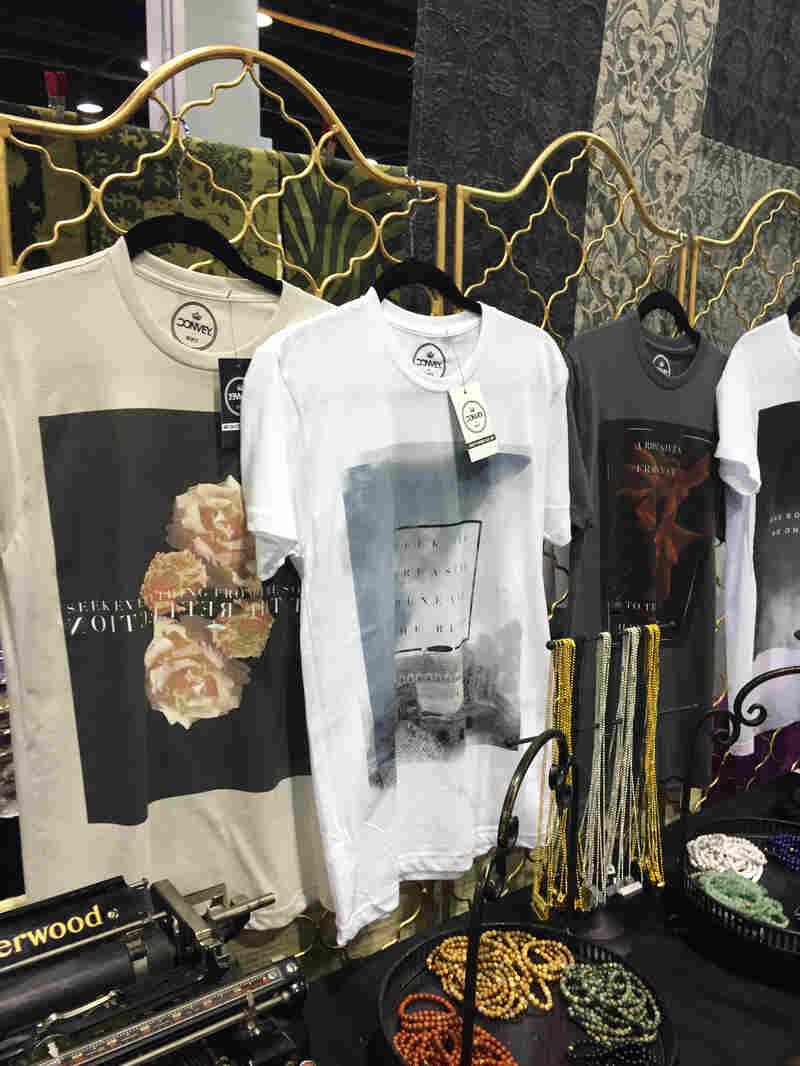 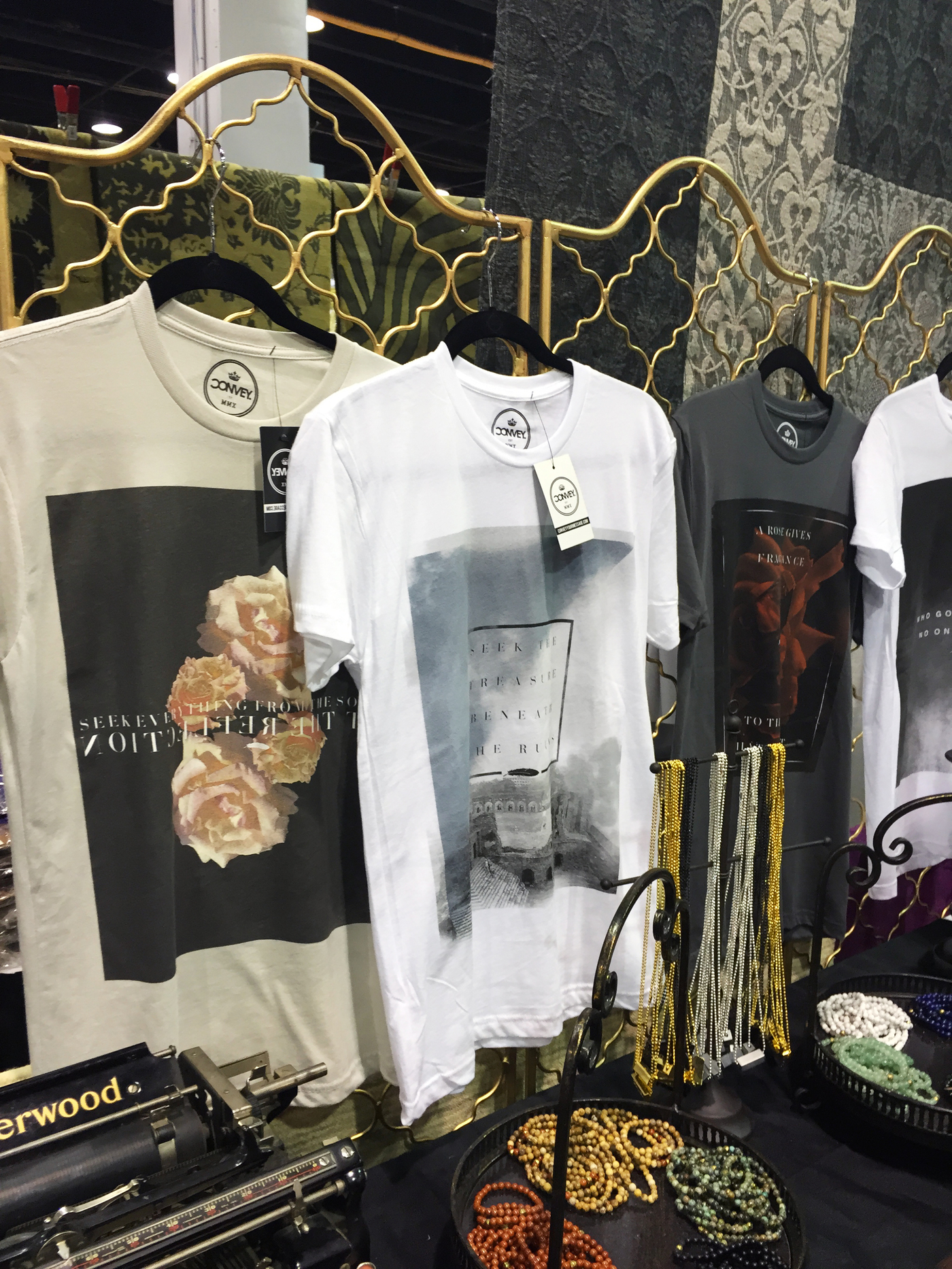 It used to be that American Muslims who wanted a halal meal had to live in a major city and know a good butcher. Want to find an eligible spouse? Get your parents involved. In the market for halal cosmetics? Good luck.

Times are changing though.

Across the U.S., the Muslim population is booming. It's expected to reach six million in 15 years, more than double its current number. That's good news for Muslim entrepreneurs looking to reach the new generation of tech-savvy Muslim consumers. Matchmaking apps like Salaam Swipe provide a twist on Tinder for Muslim millennials. Other companies supply everything from vegan halal soaps to gourmet halal meals delivered fresh to your door.

At the annual convention for Islamic Society of North America this year, community leaders gather to discuss urgent topics like Syrian refugees and civil rights. The event also serves as a venue for marketers to pitch their products. Alongside old standbys like halal chicken distributors and Islamic finance firms, startups are making a bigger show than they have in past years.

Muslim 'Hipsters' Turn A Joke Into A Serious Conversation

Among those startup marketers is Sarah Ahmed. She hands out blue plastic cups that say "Share a home with friendly Muslims" to promote Umma Spot. Umma means community in Arabic, and Ahmed says the business is "basically like an Airbnb for Muslims." It connects Muslim homeowners with travelers who want to book short-term stays where it's comfortable to eat halal or wear a hijab.

"It was actually a group of us friends just sitting together after a birthday party one day, and then we were like 'Hey, that would be a good idea!'" Ahmed recalls. "And then we took it and ran with it." Umma Spot CEO Usman Choudhry says the startup, which also plans to help Muslims network, is still in the testing phase and plans to roll out a mobile app later this year."

There's a familiar immigrant story to these startups, says Sahiba Ansari, a representative from the American Muslim Consumer Consortium (an industry group supporting Muslim entrepreneurs). "I definitely do see us following us the trend of the Jewish and Hispanic market," she says: A tech-savvy generation moving far beyond the old neighborhood and the corner stores their parents and grandparents built and relied on. 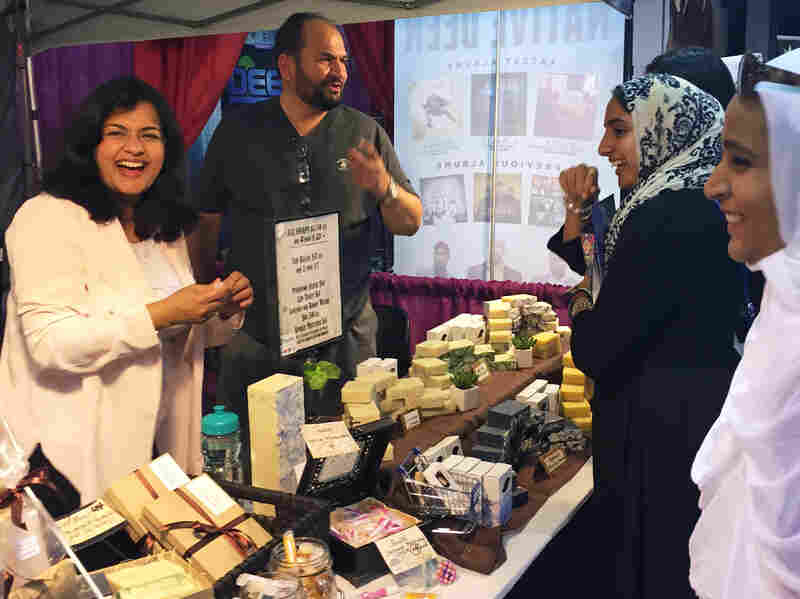 Asma Khan of Chicago at the booth for her business, Soap Ethics. Monique Parsons for NPR hide caption 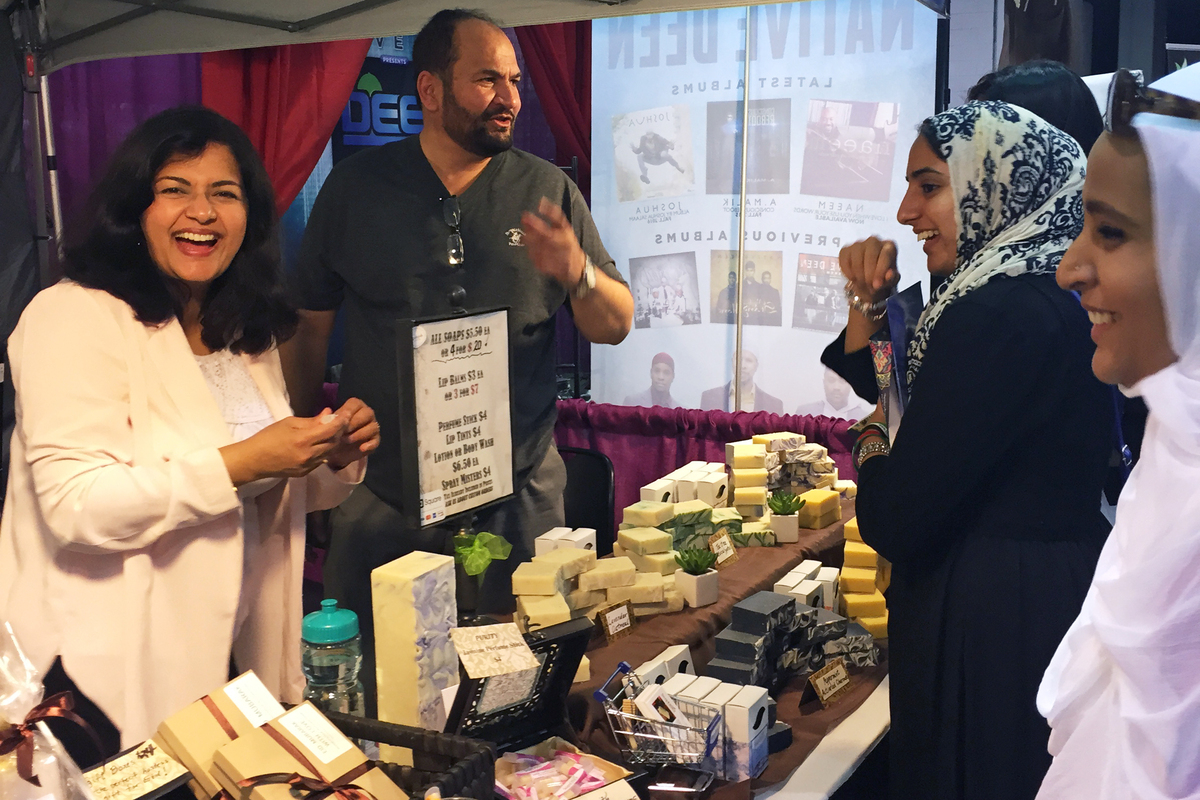 Asma Khan of Chicago at the booth for her business, Soap Ethics.

Ansari's group hosts a "Shark Tank" style contest for startups. Last year's winner was LaunchGood, a company that does online crowdfunding for projects and business ventures with social missions. She estimates the American Muslim market at close to 100 billion dollars.

"It's the American dream at work," says Benjamin Jones, a professor of entrepreneurship and emerging markets at Northwestern University's Kellogg School of Management. "And entrepreneurship of course is an important part of that process."

Back at the Chicago conference, hundreds of people sign up for Umma Spot. And women in bright headscarves crowd around a booth called "Soap Ethics," buying beautifully packaged, herbal, vegan, halal soap. A line forms at the booth for Convey, a brand that sells jewelry as well as t-shirts featuring artsy photos and sayings from Muhammad and the Sufi poet Rumi. "I've known about this brand for maybe about a year or maybe about a year and a half," says Jumana Elammori of South Bend, Indiana. "I'm always checking their social media to see what they have new. I got the rose shirt that says, 'Seek everything from the source to the reflection.'" She looks a little starstruck as she hands over her credit card. "It's awesome to see Muslims doing something cool like this."

In audio of this story, as in a previous Web version of this story, we misidentify Sarah Ahmed as the co-founder of Umma Spot. Rather, CEO Usman Choudhry says she is a team member.