Accessibility links
A Graphic Shows How Much The 'Race' Question On The American Census Has Changed : Code Switch A new interactive graphic from the Census Bureau reveals that no two surveys have ever had the same set of options for choosing one's race. 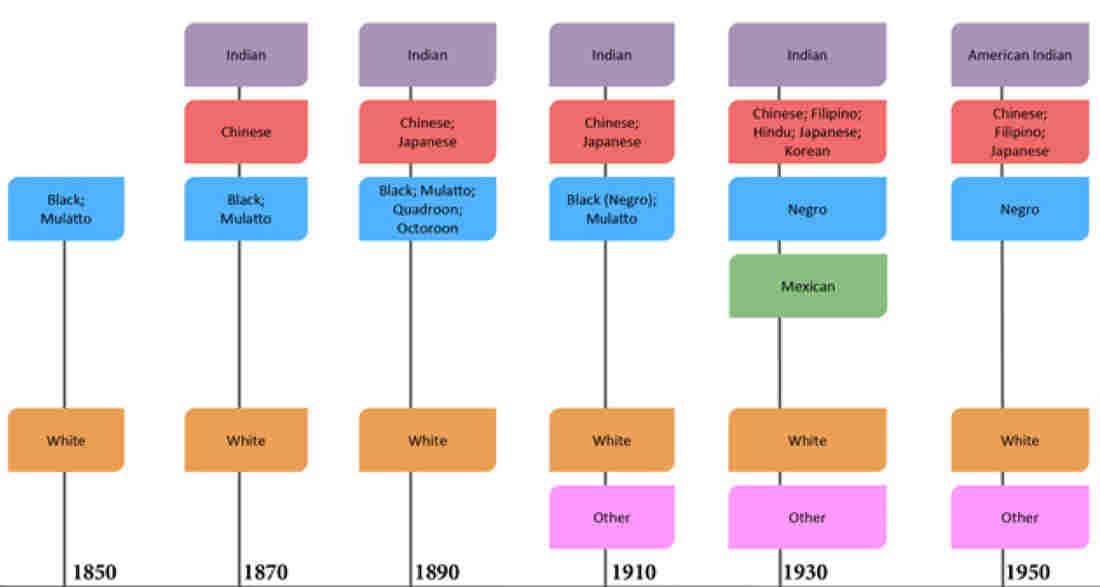 A portion of the U.S. Census Bureau's interactive graphic shows the history of the race question on its survey.

In 1890, a shoemaker from Louisiana named Homer Plessy indentified himself as "black" on the decennial U.S. Census population survey. Plessy did this even though, as a Creole who was one-eighth black, he was light-skinned enough to pass for white.

A few years later, the fair-skinned Plessy climbed onto a railroad car set aside for whites, intentionally flouting a state law segregating riders by race. After sitting onboard for awhile, he informed the white conductor that he wasn't, in fact, "white," at least not under the crude racial rubric of the late 19th century. The conductor had Plessy arrested, touching off a legal battle that turned into one of the Supreme Court's most infamous decisions, Plessy vs. Ferguson, which allowed states to constitutionally segregate their citizens by race.

From there, the story of Homer Plessy and race gets even more tricky. An official from the U.S. Census Bureau tells me that in the 1910 survey — the first after the Supreme Court ruling — Plessy identified himself as "mulatto." By 1920, he was telling the Census Bureau that he was "white." The man whose surname became a shorthand for de jure racial segregation wound up hopscotching across America's color line for much of his life. 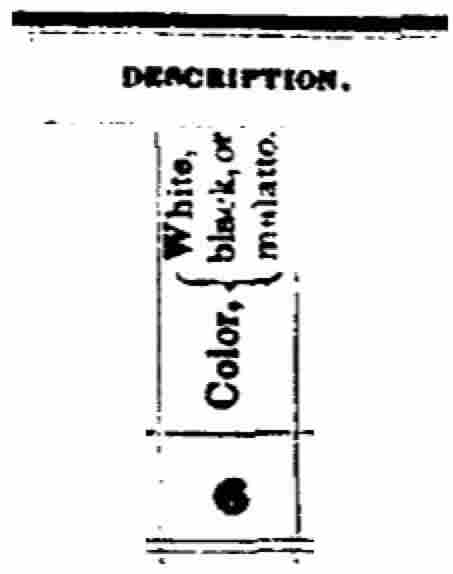 It's not clear why Plessy started identifying as a member of a different race later in his life, but his story is another example of how fluid race has always been in the United States, both personally and societywide. A new interactive graphic released by the Census Bureau this month makes this point even clearer, illustrating how the survey's question on race has evolved over the years while giving us a glimpse of racial politics at different stages of American life.

It turns out that the race question has been worded differently every 10 years — since the first official survey in 1790, no two questionnaires have ever had the same options. More groups are slowly added over time, and the terms for those groups change as people begin to exert influence on how they choose to identify, and as outdated or contested terms fall out of favor.

According to the census graphic, the 1790 survey offered just three racial options for a household: "free white females and males," "slaves" and "all other free persons." By 1850, the available categories were "black; mulatto" or "white." Native Americans do not show up on the form until 1860 — as "Indians" — the same year "Chinese" first appears. People whose ancestry traces to India don't have an option until 1920, when "Hindu," a religious identity and not an ethnic one, appeared for the first and only time.

There are no Latino or Hispanic options on the questionnaire until 1930, when "Mexican" appears. But that option went away after that survey, and all Latino/Hispanic choices completely disappear from the form for the next several decades. They don't show up again until 1970.

The graphic underscores the political and social slipperiness of these identifiers, which we tend to think of as fixed, scientific truths in everyday life. As I wrote last year, millions of people who identified as Hispanic and "some other race" in the 2000 census — the first year the form allowed respondents to do so — chose to identify as Hispanic and white in 2010. That prompted a whole bunch of chin-stroking about a potential mass exodus of Latinos into whiteness, like the way German, Irish and Jewish immigrants were gradually subsumed into American whiteness in the first half of the 20th century.

(Though what many folks missed was that nearly the same number of respondents went the other direction, as well — identifying as "Hispanic and white" in 2000 but as "Hispanic and some other race" in 2010.)

As several census officials told us last year, all this messiness is a feature, not a bug. That is, they want respondents to have more nuance and precision in how they can answer. This summer, the bureau sent out a test questionnaire that drops the words "race" and "nationality" and instead asks respondents which "category" best represents them; depending on how people respond to the test questionnaire, some version of this wording may appear on the survey for 2020.

As the country's racial politics keep changing, so does the way we orient ourselves to it. It's worth remembering that the way we choose to identify is informed not only by how we engage with the world (and how we perceive the way we are treated in it) but also, crucially, which designations are available to us at any given time.