Accessibility links
Wanted: Speakers Of Mayan Languages, Many Of Them : Code Switch As immigration to the U.S. shifts from Mexico to Central America, more Mayan speakers find themselves stuck without translators in the court system. 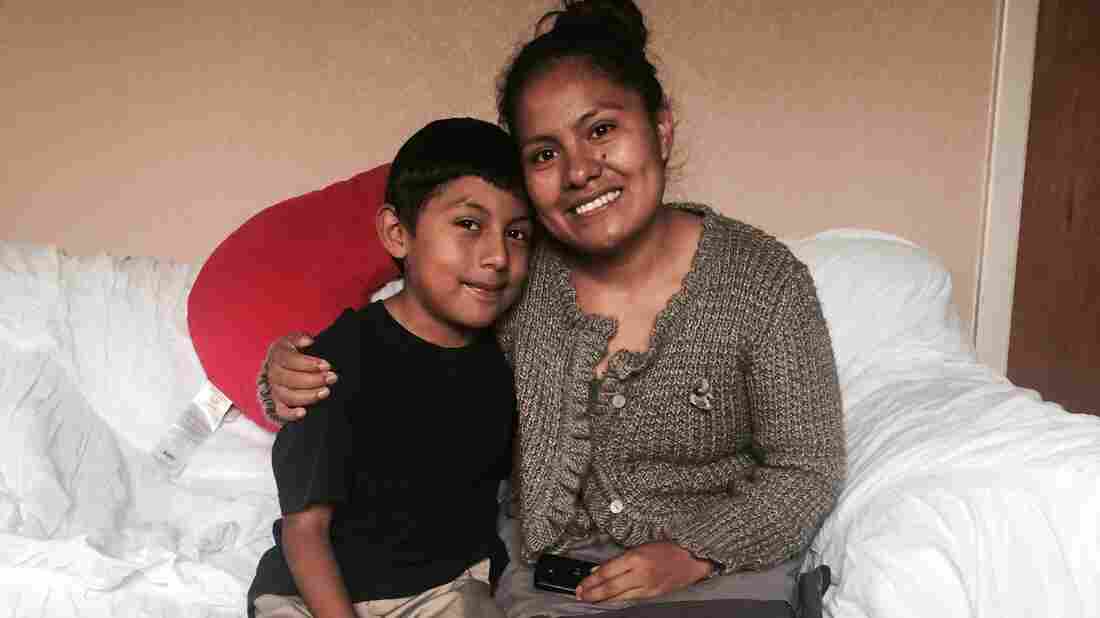 When he started elementary school in Guatemala City, bullying was so bad, Jayro Velazquez (left) decided to stop speaking his native Mam. His mother, Hilda (right), says it pained her to see him reject his roots. Jasmine Garsd/NPR hide caption 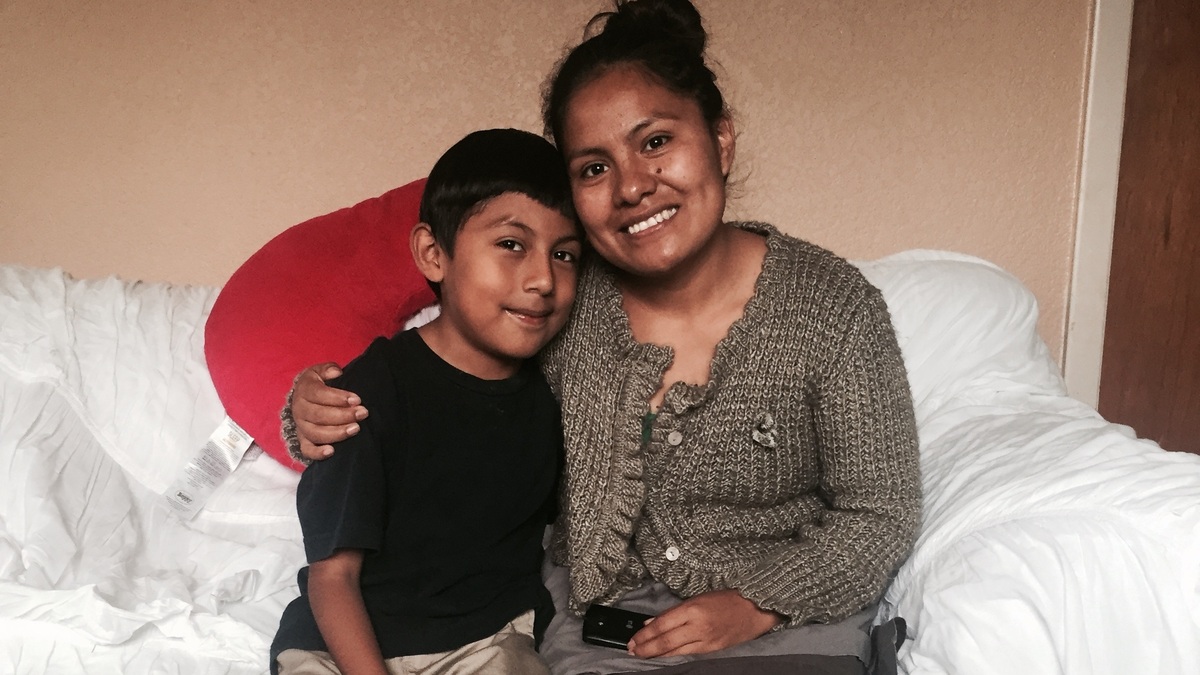 When he started elementary school in Guatemala City, bullying was so bad, Jayro Velazquez (left) decided to stop speaking his native Mam. His mother, Hilda (right), says it pained her to see him reject his roots.

On a weekday morning, in an upscale area of Arlington, Va., the suburban silence is as thick as the foliage save for the hum of a leaf blower or an occasional car. In one of the homes, Sheba Velasco is thinking of snacks for the children. She's their nanny.

Then the phone rings.

Thousands of miles to the west, it's very early in the morning, and a young man has been caught trying to cross the U.S.-Mexico border.

"First of all" Velasco begins, "may I ask that he is from Nebaj? He speaks Ixil?"

The young man is indeed from her hometown: Nebaj, Guatemala. And, like Velasco, he speaks the Mayan language Ixil (pronounced ih-SHEEL). 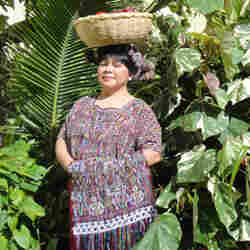 Sheba Velasco says the number of calls she gets from detention centers and courts has increased. Sheba Velasco hide caption

Velasco works as an interpreter for the Smithsonian's National Museum of the American Indian, but also for immigration courts. She's one of the few Ixil interpreters in the United States.

On the phone, Velasco begins speaking loudly. Like many Mayan languages, Ixil moves acrobatically between soft shushes and hard glottal consonants. On the line, a man's voice responds in short sentences.

No, he's not allergic to any medication, Velasco says in English, to the lady now on the other end of the phone call.

Later on, Velasco explains that the man was being taken to a clinic. He sounded more like a boy, she tells me, and he was scared. She told him to calm down.

Not long ago, calls like this didn't happen very often. These days, she says she fields "six to 10 calls a week. Mostly are young kids crossing the water. Some of them are ill, sick. Or immigration has them."

The Mayan empire collapsed mysteriously around the 9th century. Among the supposed reasons are drought, plague or some other type of ecological disaster.

"But the descendants of Mayans live today," says Sergio Romero. At the University of Texas he teaches three Mayan languages. There are more than 30, though, and an estimated 6 million people who speak them. 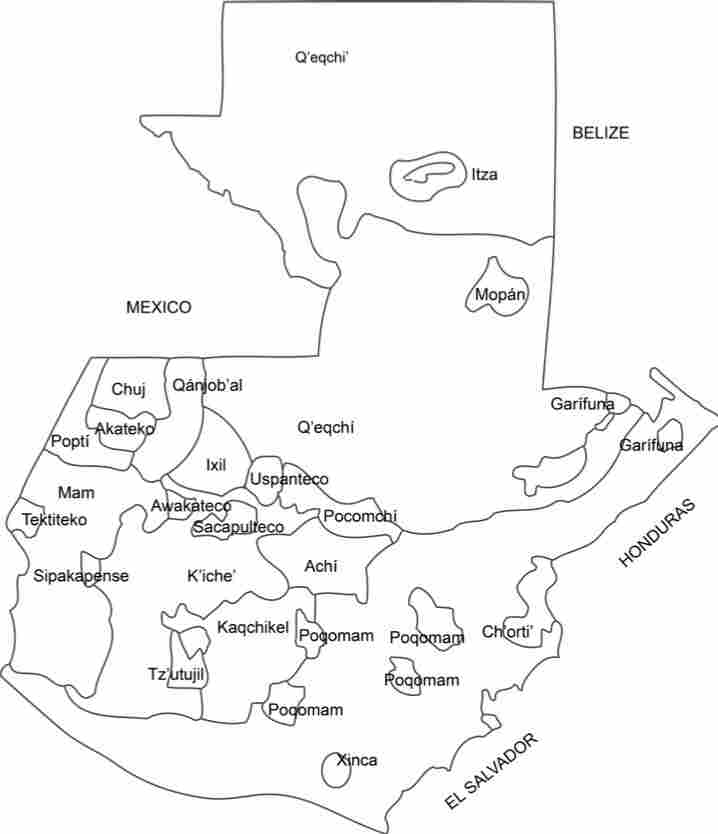 A map of the many Mayan languages spoken in Guatemala. courtesy of Sergio Romero hide caption

As Central Americans become the largest group of new arrivals to the U.S., the language of immigration is changing. Spanish is still the primary tongue between South, Central and North America, but there are more Mayan speakers.

That has created the shortage of interpreters. When he's not grading papers or planning lessons, Romero tells me, he's taking calls from detention centers and courts.

"A lot of these people will be perfectly capable of purchasing beans or tortillas or beer at a store in Spanish," he explains. "But then, engaging the police or working with a lawyer or declaring in front of a judge is not something they would be able to do."

As the demand for interpreters soars, there aren't a lot of options for increasing the supply.

That raises the question: why aren't more native Mayan speakers in the U.S. stepping forward to help?

Romero explains that all immigrants are not proud to speak their language.

"The stereotypical poor person in Guatemala is a speaker of an indigenous language. The tremendous linguistic diversity of Guatemala is seen as a disadvantage," he says. "It's seen as one of the reasons why the country is so poor."

Romero points out that these claims are illogical — neighboring Honduras and El Salvador are equally poor, and they are not multilingual countries.

As with most of Latin America, there is a double-speak in Guatemala when it comes to indigenous culture: On the one hand, the diversity of ethnicity celebrated as a source of pride and tourist attraction. There is also a strong indigenous pride movement. In 1990 the Guatemalan Mayan Languages Academy was created. And there has been a musical renaissance in recent years, with young groups ranging from hip-hop and heavy metal singing in Mayan.

In reality, though, the country has often subjected its indigenous peoples to discrimination or worse. By the time immigrants who speak Mayan languages get to the U.S., or even before then, they often choose to drop their native language at the border.

Jayro Ivan Velazquez is 9 years old. I meet him and his mother Hilda on a sunny day in a dark living room of a shelter for migrant women and children. She apologizes for his bowl-shaped haircut, but it's as cute as he is.

They've lived in Texas for a year, but Jayro been trying to forget his native language, Mam, for much longer than that. The bullying started, he says, when he began elementary school in Guatemala City. Hilda would pick him up and speak to him in Mam — the only language she knew back then.

"They said that language is made-up" Jayro says. They'd tell him: "'Your mother speaks an ugly language.' "

"He started to pull away from me," his mother recalls. "He no longer spoke." She says it made her sad to see her son reject his roots.

Jayro is unusually reflective for such a young boy. He says he'd watch his mom, and listen to her speak, and think "that's not an ugly language."

But after the bullying became physical, Jayro got a head injury. Hilda says he announced he would no longer speak any Mam.

She tells me all this in a still-awkward Spanish punctuated by the staccatos that are typical of many Mayan languages. "And then he would only speak Spanish. Spanish, Spanish, Spanish."

Hilda learned Spanish in the U.S., while she and Jayro were in a detention facility. They'd been caught at the border, and they spent nearly a year locked up. Nobody in there spoke Mam.

She says she was placed with an interpreter she could barely understand.

She tried talking with her son, but he'd made up his mind to forget that language. She became depressed. So another detainee taught her Spanish.

Hilda hardly speaks Mam anymore; only over the phone once in a while with a sister.

After some prodding, Jayro tells me there's this one phrase in Mam, a kind of inside joke between him and his mom.

It's a very important phrase to know if you are a cuddly, 9-year-old year old boy like Jayro.

He says it means "scratch my back." Hilda's face lights up, and her quiet demeanor is broken by a laugh.

"And then I scratch his back" she tells me.