Accessibility links
'All American Boys': A Young Adult Book About A Police Beating And A Hard Choice : Code Switch A new young adult book tells the story of a police beating from two perspectives: the black boy who was beaten, and a white boy who witnessed it.

It's art imitating life, really. All American Boys is a young adult novel that looks at a specific instance of police brutality from the perspectives of two high school classmates: Rashad, who is savagely beaten by a local policeman who (wrongly) suspects him of shoplifting and assaulting a white woman, and Quinn, who sees the beating and initially pretends he didn't. It's a fictional reflection of real-life police encounters with young black men that ended badly.

Co-authors Jason Reynolds and Brendan Kiely had written young-adult books separately for publisher Simon and Schuster when they were asked to go on a group tour of male authors. The two, both New Yorkers, ended up sharing a room, and while they were on the road, George Zimmerman was acquitted of the murder of Trayvon Martin. 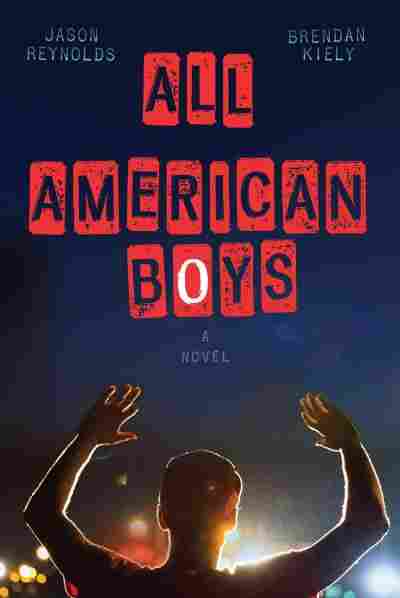 by Jason Reynolds and Brendan Kiely

Reynolds, who is African American, remembers what it was like being on tour at that time. "I'm angry and I'm frustrated and I'm sort of wrought with emotion — and I'm traveling and living with a stranger," he says. A white stranger at that.

They got to talking about it all, and it turned out Kiely was experiencing similar feelings. "He was as frustrated as angry and as confused as I was," says Reynolds. They talked themselves into a genuine friendship, where race was often a topic of conversation.

The conversation became even more urgent the following August, when Michael Brown was killed in Ferguson. "That was the final straw," Reynolds remembers. Brendan came to me and said 'Look man, I can't take it anymore. We have to do something. Will you write this book with me? Can we do this thing together?'"

In the book, after Rashad's beating — which was captured on cell phones by onlookers and spread virally through social media — he recuperates in the hospital. He's appalled to find himself the center of attention, in a spotlight he doesn't want. Supporters in his high school and around town take up the cause with a phrase that is graffiti'ed on sidewalks and the town's walls: Rashad Is Absent Again Today.

Meanwhile, Quinn wrestles with what he's seen. It's complicated by the fact that the cop who beat Rashad is a close family friend — his best friend's big brother. Quinn can't believe the man he knows would beat anyone if the person on the receiving end didn't deserve it. He's always seen police as protectors. He wants the whole thing to just go away.

Brendan Kiely, the co-author of All American Boys, wanted Quinn to not have that option. Quinn, he says "has to acknowledge [the beating] and see it. That's a metaphor for him and, I think, for many of us in America, especially those of us who are white and who have escaped this kind of brutality." Kiely says sympathetic white people "have to recognize that we do have a role to play."

Ultimately Quinn has to make a decision, one that may cost him something in the near future: friends, a missed opportunity for a scholarship, etc. How he resolves that is at the heart of All American Boys.

Kiely says as he and Reynolds cross the country on tour, the book has really resonated in inner-cities, especially the city they both live in: "In New York City, a place where stop and frisk has been a policy in place for many years, there were kids who'd come to school every day, or leave school every day, and experience this kind of racial profiling."

In another city, he said, "We got a question from a kid who said 'What can a young white person do who knows this is wrong, but just doesn't feel I have a way into this?'"

Jason Reynolds believes that even as many adults shy away from talking about race, their kids are anxious to have that conversation. "No matter what the adults say, nine times out of ten, the kids are ready to talk."

All American Boys may help them get there.

Read an excerpt of All American Boys