Accessibility links
Osceola At The 50-Yard Line : Code Switch The Seminole Tribe of Florida works with Florida State University to ensure it that its football team accurately presents Seminole traditions and imagery. 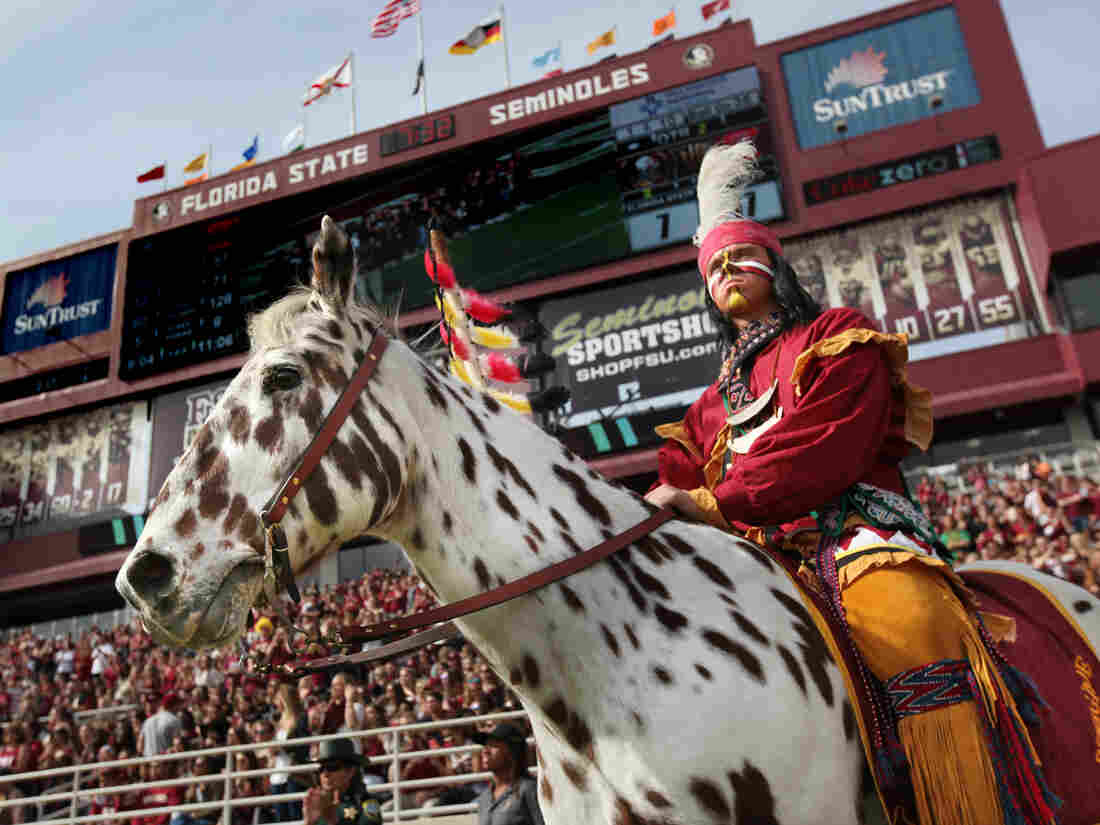 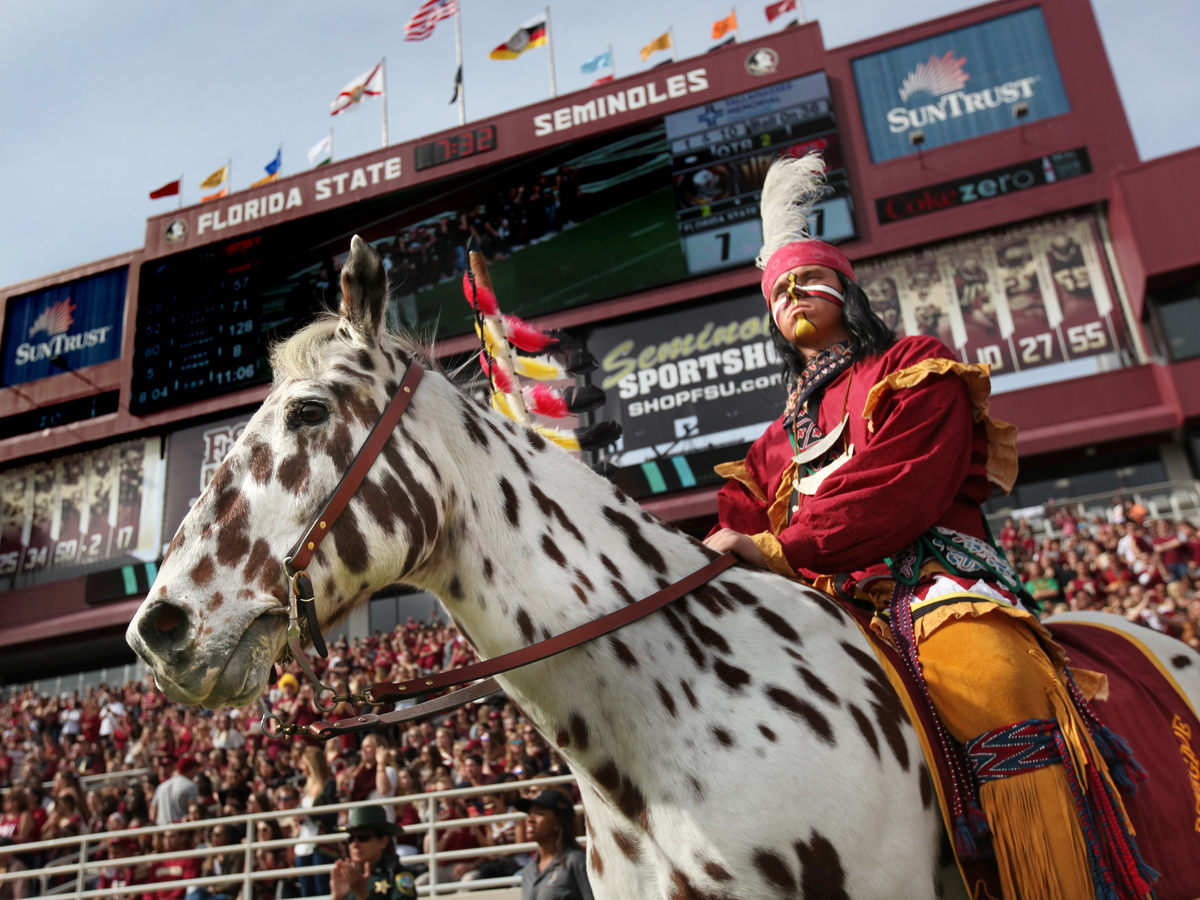 "Osceola" stands in front of a crowd at the FSU homecoming game.

Seminole patchwork is not well-known outside the state of Florida. The Seams looks at culture through clothing — and within this hand-sewn and folded patchwork is the story of the Seminole Tribe of Florida.

Norman "Skeeter" Bowers, 48, has a closetful of brightly colored Seminole Indian patchwork — jackets, vests, shirts, tunics — the kind the Seminoles have made and worn for over a century. He's a senior member of the tribe and a special liaison to the Florida State Seminoles powerhouse football team. The tribe has a unique relationship with the university, one of the few colleges with approval to still use a Native American name for its athletic teams. It's a decades-long relationship of mutual respect that got started in 1947.

The Seminole tribe allows Florida State to use not just its name for the football team, but also the iconography of one of its most powerful leaders, Osceola. Before each game, a student reenacts a scene, dressed as Osceola in tribal patchwork. The "Osceola rider" enters the stadium atop a horse named Renegade, carrying a feathered, flaming spear which he throws at the 50 yard line as football fans cheer.

Skeeter Bowers is now the tribal liaison to the "Renegade team": "I know that that mascot that portrays Osceola, it's not Seminole, it's not Native. But that spirit, basically it's that Seminole spirit, that Unconquered spirit, you know, is all they try to capture. Osceola's name still lives."

Bowers points to a mural he had painted of Osceola over his garage at his home on the Brighton Reservation. Osecola is shown standing over a table and planting a knife into a peace treaty. It's a legend for which the warrior is famous.

"He was gonna fight to the death," Bowers says. "He wasn't going to leave Florida, this was his home. When they were having talks with the U.S. government, basically he pushed his way to the front and went to that table and drawed his knife out and planted it in a peace treaty."

The Seminole Tribe of Florida is called "The Unconquered," and that's because between 1817 and 1858, the Seminoles fought three wars with U.S. troops. They never lost those battles, which they fought to a draw, and never declared surrender. Osceola, a military leader within the tribe, was captured under a false flag of truce near St. Augustine in 1837. He was betrayed by a U.S. general, and died in prison in South Carolina several months after his capture, in 1838.

Osceola At The Fifty Yard Line

But by the latter half of the 19th century, the Seminoles had retreated back into the Everglades, vastly reduced in number. The majority of the tribe had long since been shipped off to Indian Territory in Oklahoma. The few who remained emerged at the end of the 19th century, doing what they could to survive in a new world. They catered to the tourist trade, making, selling and wearing their colorful patchwork. They wrestled alligator and restocked their cattle herds. Today, they own the Hard Rock Cafe franchise around the world. There are 4,000 tribal members on five reservations in South Florida, and a sixth closely related tribe of 600, the Miccosukee, thrives on a reservation near Miami.

Kyle Doney, 31, is an FSU alumnus. He's also a Seminole tribal member and deputy director of the Native Learning Center in Hollywood, Florida, where the tribe has its headquarters. For the homecoming game on Nov. 14, he participated in the "tradition of tribute" re-enactment. On that day, the "warrior Osceola" handed the spear to Doney, who plunged it into the ground midfield before the game. Doney was dressed in a Seminole turban, breastplate and leggings. Like the "Osceola" student rider, his regalia was made for him by the tribe. He looked like he'd stepped out of the Everglades in the 19th century.

"It just kind of brings you back and [makes you] think about everything that has happened, the wars and battles," said Doney. "You know it's just that unconquered spirit that they had in them when they wore it. And just to wear that nowadays? I'm very proud and honored."

Last year, the tribe authorized Nike to print its symbols on FSU's football jersey. The tribe receives no compensation for this, but a spokesman for the tribe says it's a win-win situation that goes well beyond the football field. For example, FSU offers scholarships to Seminole students, honorary doctorates to distinguished members of the tribe and cultural exchanges between the tribe and the school. The school also says it tries to actively recruit Seminole students.

Todd Van Horne oversaw that project for Nike. Nike incorporated the symbols for Fire, Arrow, and Man on Horse onto the jersey. "We worked with the Seminole Tribe on the symbolism, so when you bring those things together, it replicates the storytelling mechanism of their pre-game ritual of Osceola coming out on the horse and planting the flaming spear at mid-field."

Not all members of the tribe are 100 percent on-board with this appropriation. Moses Jumper is a 65-year-old tribal elder. He explains, "We have some people in the tribe that thinks we ought to do away with the thing," he said, of the "Osceola" character. "And we have some that are trying to make relations work."

As a former athletic director for the tribe, Moses Jumper would like to see more Seminole athletes — FSU has just one Seminole player on the football team. And this year, he brought a group of Seminole horseback riders to the homecoming parade for the first time. And he did it in part because of his respect for one man, Allen Durham.

Durham's family started the "Osceola" tradition back in the late 1970's. He played "Osceola" himself, years ago. It's an honor for students to do so. Before the game, Durham gathered a small group together and invited Moses Jumper to speak. 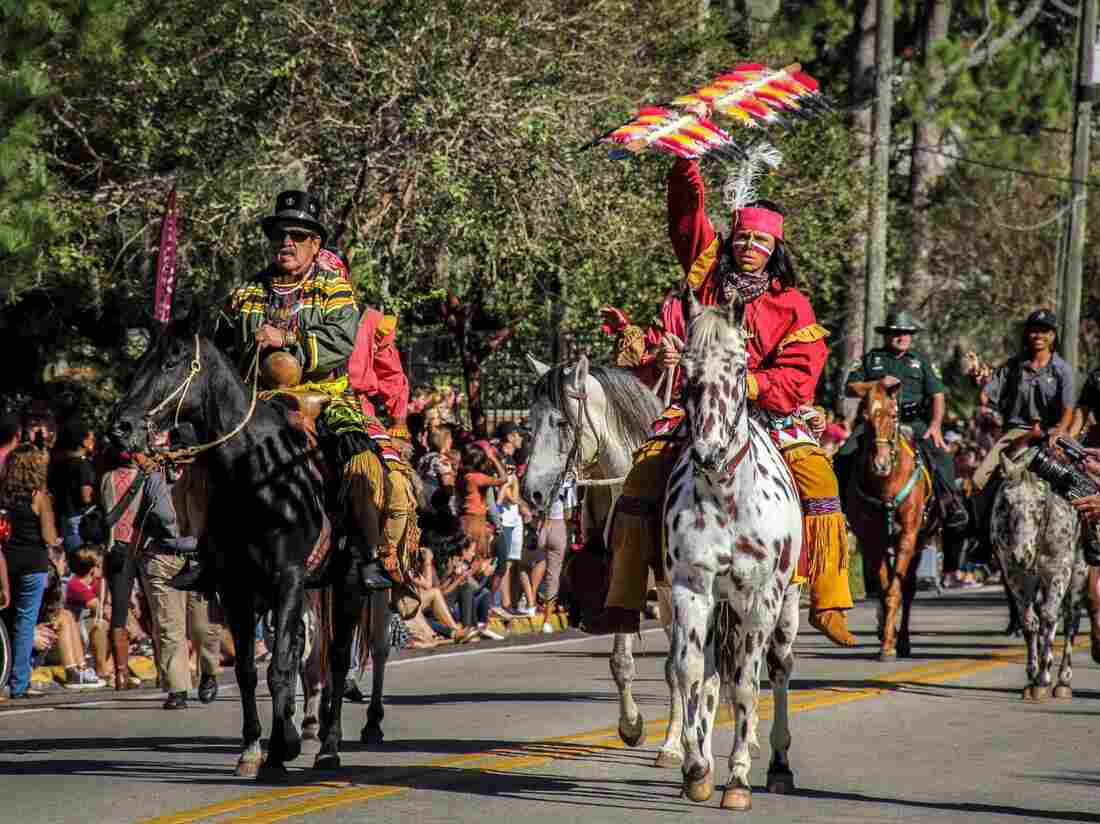 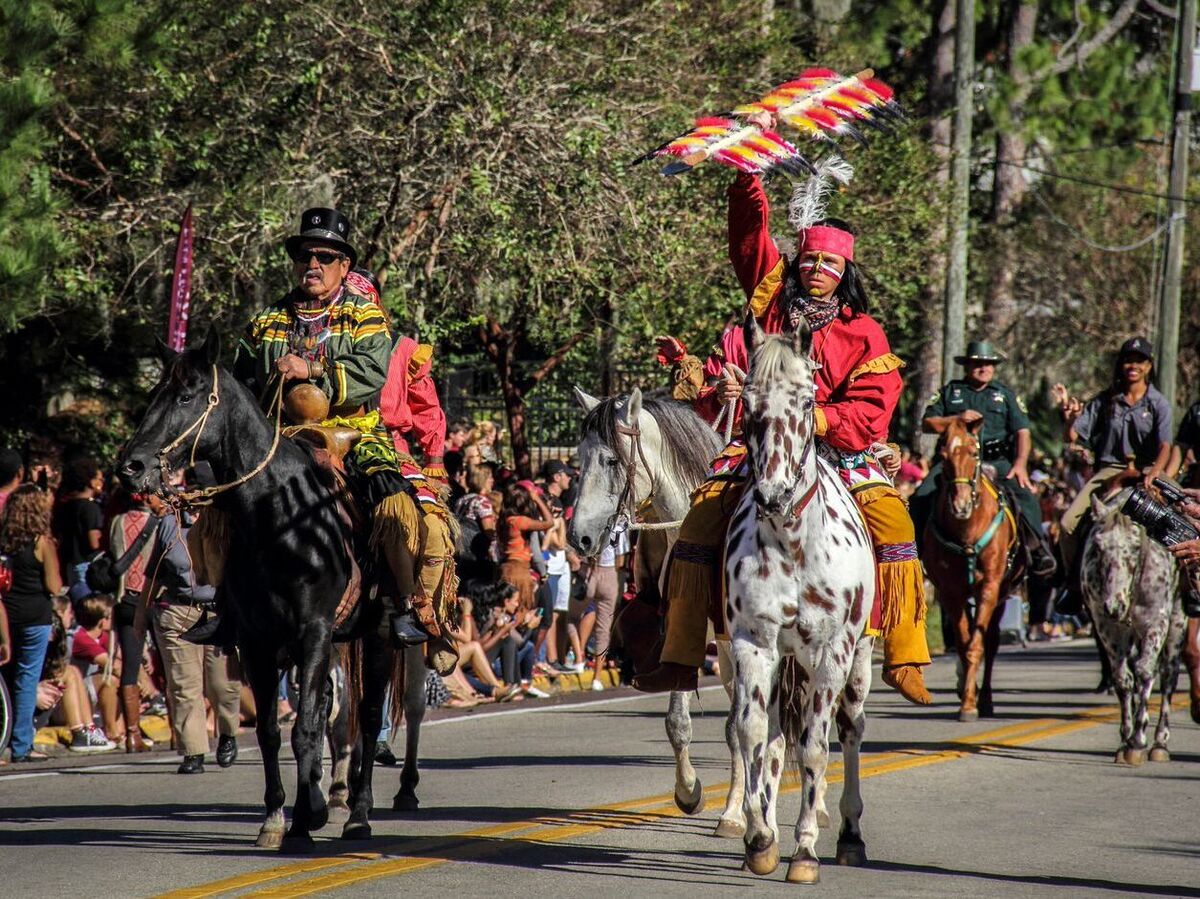 "Moses has been so helpful with us. And we can't thank you enough for everything you do to help us make this traditional tribute as accurate as we can. And as is tradition with the Renegade team, we always come in with hands on top of each other and have our team shout before we take the field. And we would love it if you'd be our first hand today. Team on three, okay? One, two, three, TEAM!"

And then the "war drums" sounded, and Osceola, in full regalia, rode out on his horse, Renegade. The horse reared, and the warrior threw his flaming spear. Seminole tribe members paraded out on the field wearing patchwork in a riot of color. The crowd, including some of the tribe, sang the chant. For Skeeter Bowers, it's love.

And the Florida State Seminoles were unconquered, defeating North Carolina State 34 to 17. Tonight they face their fiercest rival, the University of Florida Gators.

Reporting for this story comes in part from the Florida Humanities Council and Florida Cultural Resources, Tarpon Springs.