Accessibility links
Young Muslim Women Weigh In On The Hijabi Character In 'Quantico' : Code Switch Viewers say Nimah and Raina, twin sisters on ABC's Quantico, reflect the many ways one can be a Muslim woman in America today. 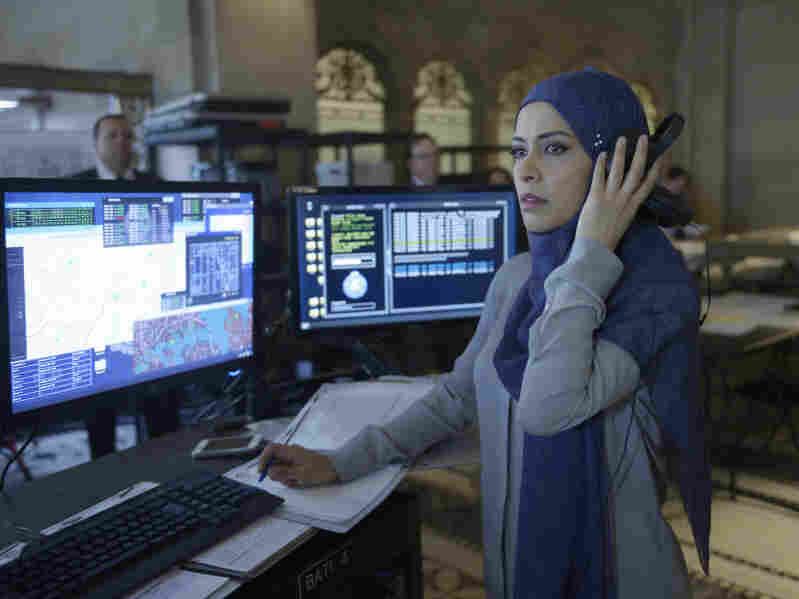 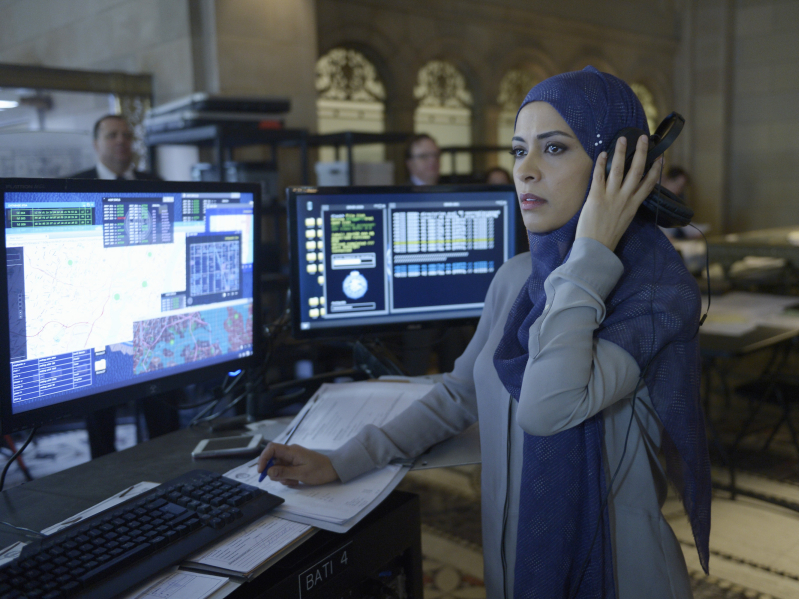 When Quantico, the hit ABC drama about a group of FBI recruits who find themselves mired in a terrorist plot, first premiered in September, Bollywood-watchers predicted it would make Indian actress Priyanka Chopra a household name this side of the Atlantic.

While Chopra's Alex Parrish has certainly wowed audiences, many viewers have found themselves equally invested in the back stories and romantic longings of Nimah and Raina Amin, twin FBI agents played by one actress, the Lebanese-born Yasmine Al Massri. A big part of Nimah's and Raina's appeal is that they represent rarities on American television — strong, well-rounded female Muslim characters.

"I've been receiving messages from young Muslim girls saying, 'Thank you for showing that character,' " Massri said in an interview. She also gets lots of fervent messages expressing hope that her characters aren't involved in the terrorist plot, she says, but, course, can't say anything either way because "everyone on Quantico is a suspect."

She understands why fans are particularly worried whenever Raina (who wears a hijab) and Nimah (who doesn't) come under suspicion on the show. "I've never seen a positive veiled woman on television before," she says, one who was "a hero, smart, sexy and competitive. I feel like I have a very honorable mission." 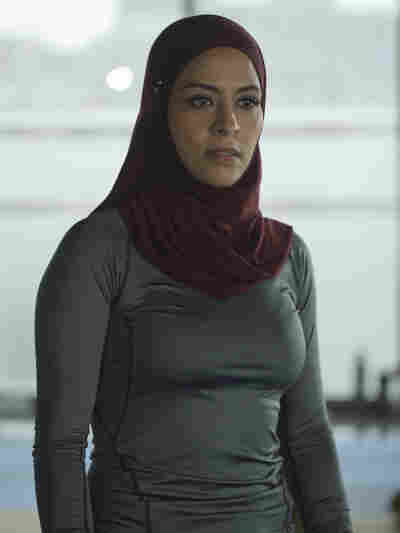 Raina Amin, played by Massri, often has to endure awkward conversations with her fellow recruits about her choices, her clothing and whether or not she's allowed to have crushes. Phillippe Bosse/ABC hide caption 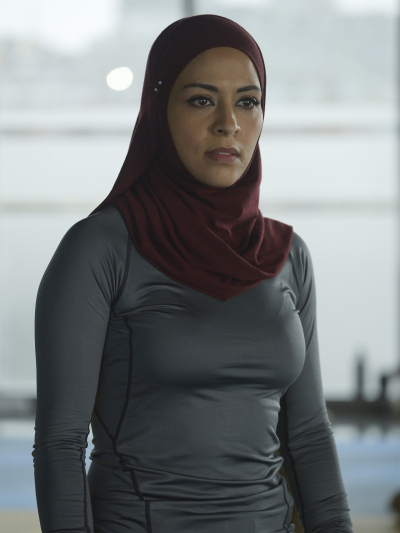 Raina Amin, played by Massri, often has to endure awkward conversations with her fellow recruits about her choices, her clothing and whether or not she's allowed to have crushes.

Given that well-rounded Muslim women on-screen are so rare, it should be no surprise that the Quantico twins have steadily become fan favorites among viewers, particularly among those who are young Muslims themselves.

"From the beginning I was very intrigued when the commercials would come on," recalls Komal Rasheed, 33, a Pakistani-American who works in public policy. "I remember thinking, 'Oh gosh, please don't let her be a stereotype.' I watch Homeland and it's just awful because the women can be easily manipulated and one-dimensional, whereas on Quantico she's seen as more empowered."

Other young Muslim women said they appreciate that the Amin twins have motivations and back stories of their own, since the lives of female Muslim characters in TV shows and movies, when they do show up, tend to revolve around men involved in terrorism.

"It's nice to see them now, especially in the climate we're in," notes Gabrielle Deonath, a 19-year-old writer who recaps the show for Brown Girl Magazine. "They kind of normalize who Muslims are and are educating viewers on things like the hijab."

For Deonath, Massri's portrayal of Raina in particular is intensely personal. "I started wearing hijab two days after I turned 16," she recalls. "In high school there weren't that many other Muslim kids, so for me to make that transition in the middle of my high school career was a little scary." 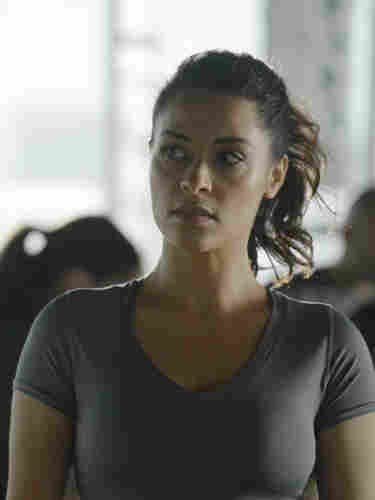 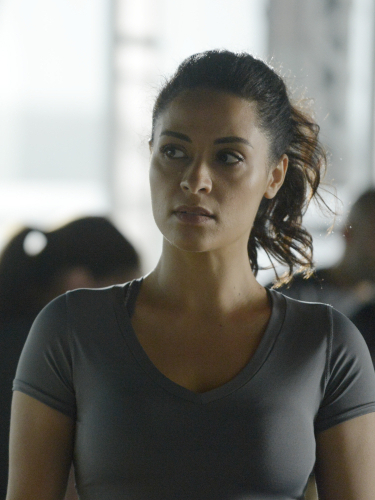 But the Adelphi University student says that she's always tried to have conversations with peers who were curious about her hijab. "When I told them it was my choice and that my parents weren't making me, that was weird to them," she says. Deonath's story in many ways echoes the journey Raina goes through on the show, as she often has to endure awkward conversations with her fellow recruits about her choices, her clothing and whether or not she's allowed to have crushes (which she does, on fellow recruit Simon Asher).

One small yet significant moment on the show struck Deonath as particularly notable. At one point, Raina has to participate in a swimming exercise alongside her co-workers and wears a full-body swimsuit to do so. "People think [hijab-wearing women] can't go to the beach and things like that," says Deonath. "It's like 'No, you can do what other people are doing!' "

Fellow writer Rawan Elbaba, 22, who is also hijabi, or a hijab wearer, agrees that Quantico has provided an opening for conversation about both the hijab and Islam. "Even though Raina is more conservative, she still does just as well at the FBI academy," Elbaba points out. "She's still allowed to be a regular American girl, even though she wears the hijab."

Elbaba, the executive editor of Layali Webzine, a digital lifestyle magazine geared toward young Muslim women, says that one of her most-talked-about recent posts was about Raina's decision to remove her veil in front of Simon as the two confided their feelings for one another.

"I felt it was a little sad," she says. "The hijab is a commitment. To see her take it off so easily was a little disappointing." 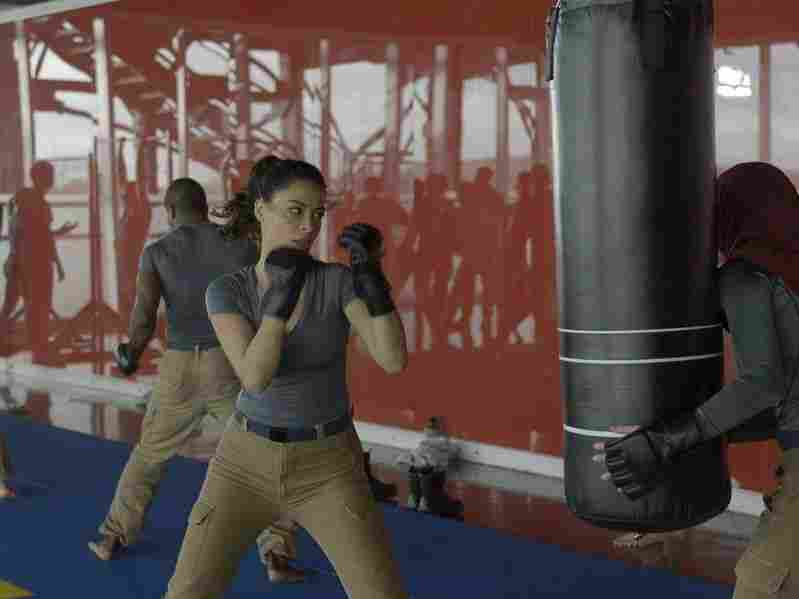 Twin sisters Nimah and Raina Amin work out in a scene from Quantico. ABC hide caption 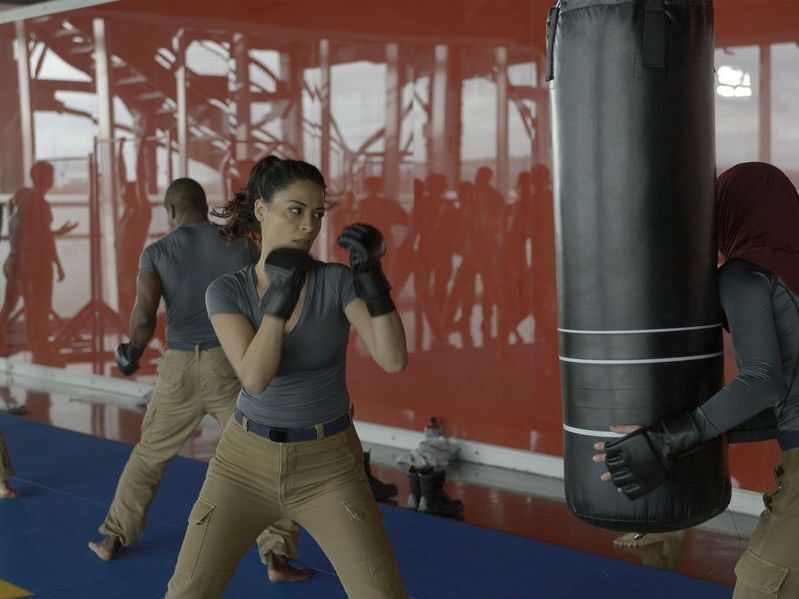 Twin sisters Nimah and Raina Amin work out in a scene from Quantico.

But others say Nimah's and Raina's personal quests to interpret their faith — and its boundaries — reflect the many ways one can be a Muslim woman in America today. "There are Muslims who drink; there are Muslims who do not," says Rim-Sarah Alouane, a French Ph.D. student studying religious freedom and civil liberties. She says the Amin sisters — Raina, the hijabi, and Nimah, who is more secular — help demonstrate that spectrum.

While Alouane says she likes watching Quantico and enjoys seeing Raina and Nimah's stories progress, she does wish that they did not have to talk about their identities and struggles so much. "I want to see Muslims beyond their religious practices," she says. "I want to see a Muslim Olivia Pope. I want to see a Muslim Meredith Grey," referring to the main characters of Scandal and Grey's Anatomy.

But all in all, it seems like the Muslim viewers I spoke to were just happy to have a courageous, indisputably American character to hash out.