Listen · 7:12 7:12
A Princess In Patchwork: Sewing For The Miss Florida Seminole Princess Pageant 7:12 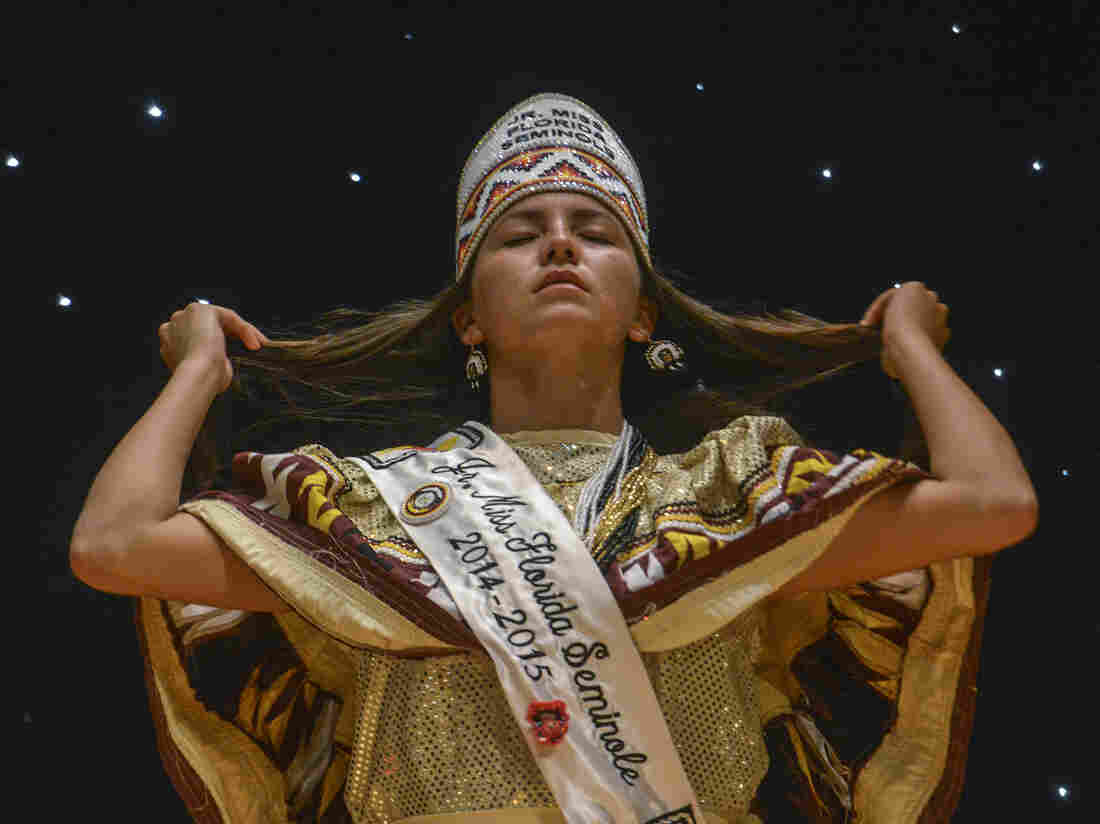 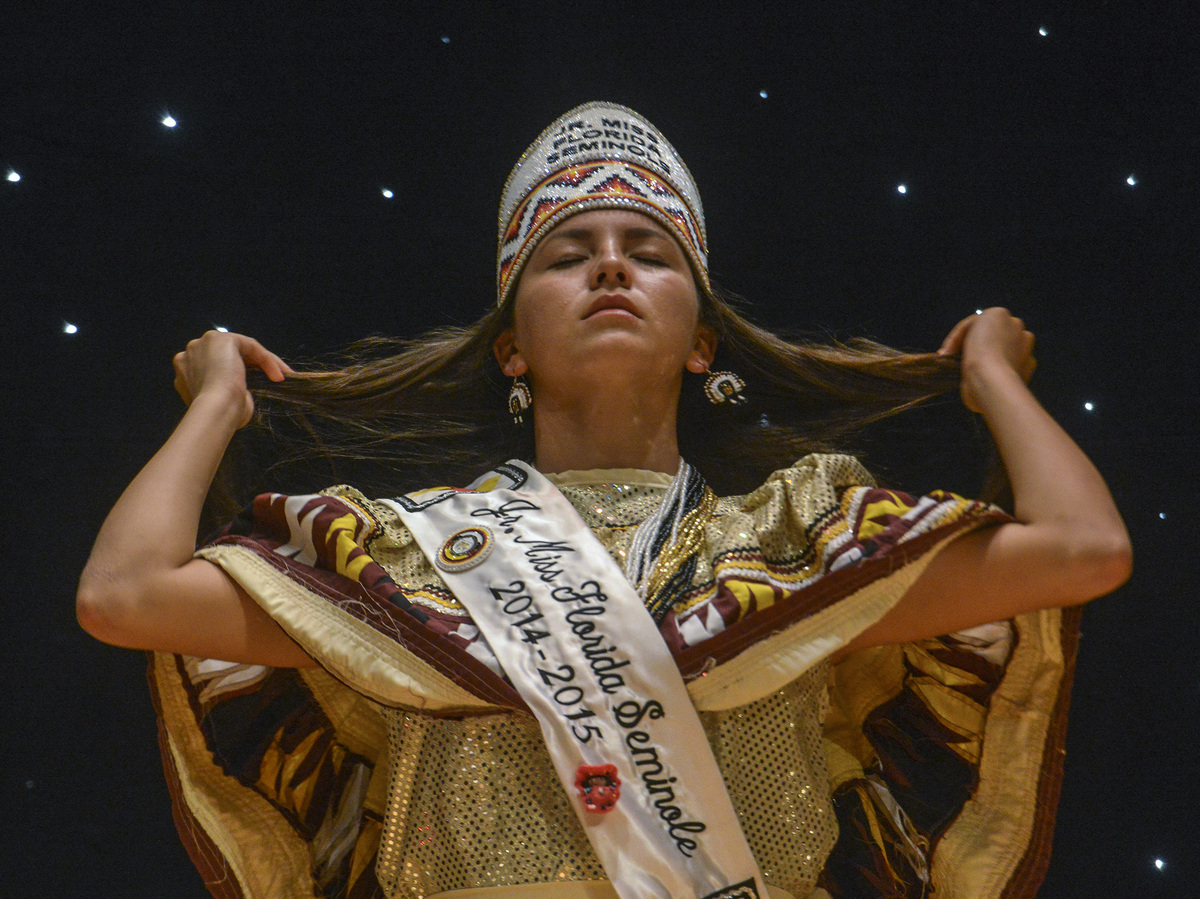 The Seams, an occasional NPR series on clothing as culture, has been reporting a series about Florida Seminole Indian patchwork and its heritage and use in tribal life. Read the first installment in this series, "Osceola At The Fifty Yard Line."

Twelve young women in their teens and early twenties are walking on a stage surrounded by twinkling lights that look like a starry night sky, wearing eye-catching dresses of Seminole Indian patchwork. They're contestants in the 58th annual Miss Florida Seminole Princess Pageant. The winner will be the tribe's ambassador to the wider world.

Lewis Gopher was one of the emcees at the pageant, which takes place the last weekend in July. He explains what patchwork is to the crowd at tribal headquarters in Hollywood, Fla.

"Sewing is very important to our people," Gopher says. "There are traditional outfits, which is all cotton, but also new materials like rayon and lace. It's evolved, just like we have, and we put our own twist on patchwork garments."

Seminole patchwork is not the patchwork we associate with quilting bees and bedspreads. Think of it almost more like cotton origami, squares of cloth rolled and folded into symbols: flags, crosses, bird, traditional elements. The symbols are sewn into strips, and these strips are sewn together to make garments like jackets, vests and skirts. Many Seminole tribal members wear patchwork daily, and nearly always wear it for special occasions like pageants.

Making patchwork is intricate and time-consuming, and a finished garment can cost hundreds of dollars. For reasons of tradition and economy, pageant contestants often learn to make it. Twenty-year-old contestant Alexis Jumper is one of them.

"I go about picking the colors, and then from there, I would cut the strips and everything in the colors I want, and I can decide if I want to be more traditional, or I can go for a more flashy approach to it," she says. "I love shiny."

Alexis comes from Hollywood, the largest of the Seminole reservations and communities in South Florida. For her, the pageant is more than a rite of passage — it's a career step up the tribal hierarchy.

"I want to get a job here at the tribe because I want to one day work up to Secretary and then one day I want to strive to be Chairman," she says.

The Princess Pageant began when the Seminoles were working to gain federal recognition, back in the late 1950's. Pageant Director Wanda Bowers tells the story of the young secretary who was accompanying tribal elders to Washington, DC. She tired of a certain question.

"They'd ask, 'Is she your princess?'," says Bowers. "She would always say 'I'm the secretary-treasurer of the tribe. I'm their translator, their note-taker' Finally she told the chief, 'I'm not gonna be recognized as the princess anymore. I want you to start a princess contest so that we can have an official princess to be recognized as our ambassador."

By 1960, the tribe held its first such contest, and it's become increasingly traditional over time. (The swimsuit contest was dropped after the first season.) Bowers, 64, won the pageant in '68 and '69. She's has been directing the Miss Florida Seminole Princess Pageant since 1991. With the Jr. Miss Pageant added, young women 13 to 25 can participate. Princesses travel — a lot.

Alexis is one of several contestants who made some of her outfits. "I learned all my sewing at the [Art and] Culture Center here in Hollywood. Sewing is something that I really love doing. It's one of my major hobbies that I do every day."

The invention of the sewing machine changed the way the tribe looked. When the Singer sewing machine came into existence in the 19th century, the Seminoles embraced it. The outline of the long skirts and capes emulated European dress — and kept mosquitoes at bay. By the 20th century, tourists sought the Seminole patchwork, too, and that brought in money for the tribe.

The sewing room at the Arts and Culture Center is always busy, especially around the Princess Pageant and other festival times. It's lined with bright skeins of thread, rickrack and bias tape, and banks of sewing machines — even a display of old hand-cranked models.

One of the seamstresses in the sewing room on a weekday morning is Shannon Tiger.

"I'm making Fire," she says, of the cloth piecework she's running on a sewing machine. "This pattern comes from when you start with [another pattern called] Rain, ... but you cut it into two squares, and then you cut it and put it them together at an angle and then you get Fire."

For another seamstress, patchwork is also a business. Ashley Cypress is a member of the closely related Miccosukee Tribe. She sews for natives and non-native people alike. She uses social media expertly, especially Instagram. She's dressed a lot of pageant contestants. 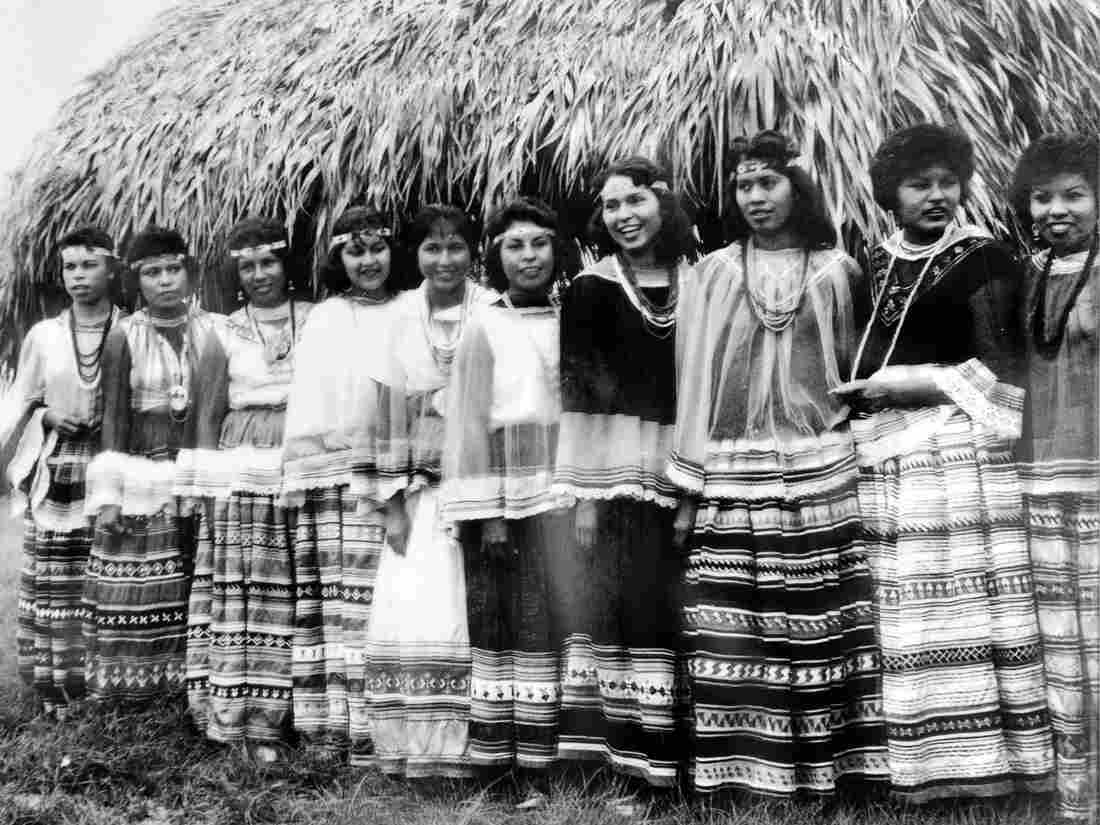 Earlier contestants from the 1960's for the title of Miss Florida Seminole Princess. The dresses have gotten flashier, but traditional cotton patchwork remains an important category in all patchwork competitions. Seminole Tribe of Florida hide caption 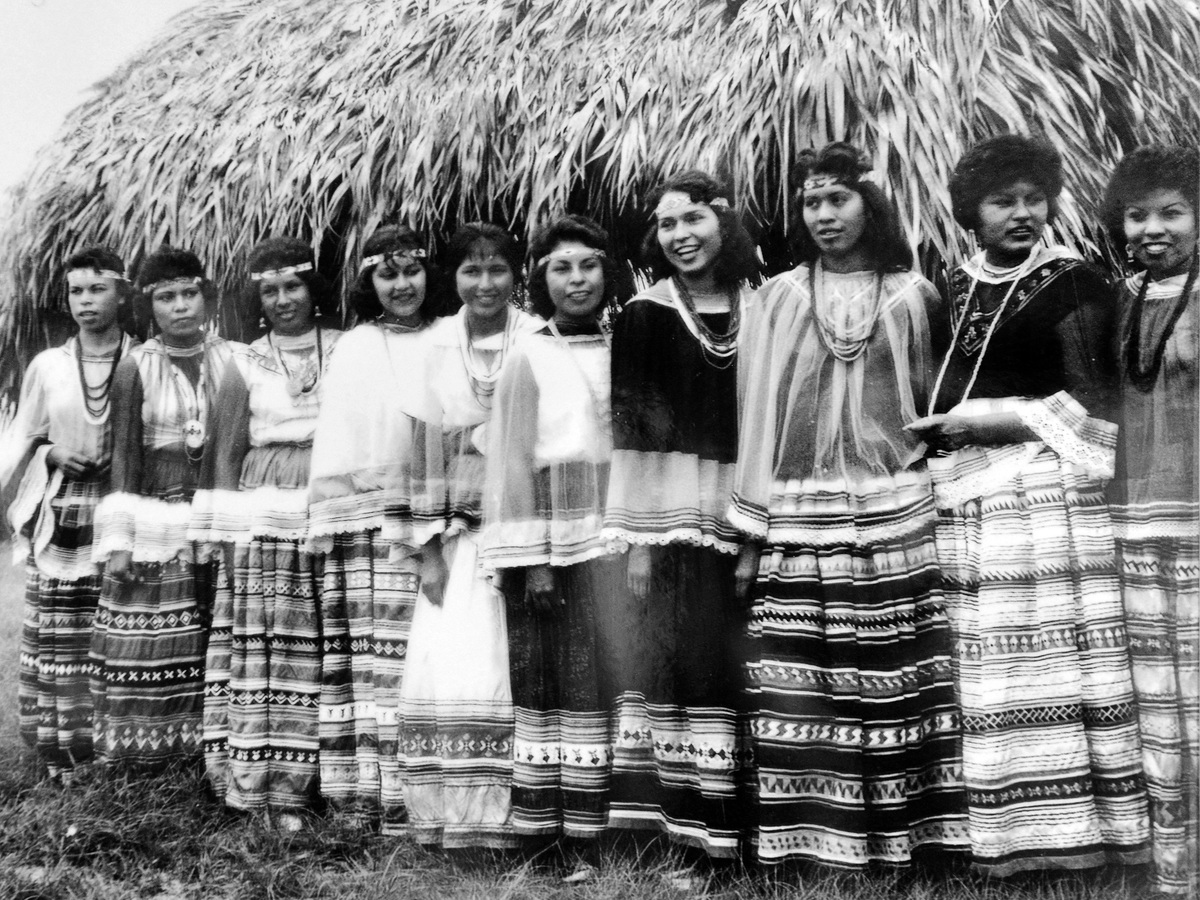 Earlier contestants from the 1960's for the title of Miss Florida Seminole Princess. The dresses have gotten flashier, but traditional cotton patchwork remains an important category in all patchwork competitions.

One historian says that what makes Seminole patchwork so appealing is the way the patterns move: in the wind or when someone is walking. Arrayed on a stage, the patterns on the young women glow, as if they were part of a neon Pop-art kaleidoscope — they're often made from modern fabrics today like satin and velvet. In the case of Alexis Jumper's skirt and cape, she's used sequins and lace.

Alexis greets the pageant audience in Creek first, then English. "Hello and good evening, everyone. My name is Alexis Jumper. I am 20 years old and from the Hollywood Reservation."

Tribal members, like Wanda Bowers, call the contestants the "life-givers" of the next generation. Her daughter, Christine McCall is also a mentor to the contestants and the 2005 Miss Florida Seminole Princess. She reminds the competitors that their role is to represent the tribe to the outside world.

"I have to remind the girls that, yes, you know who we are, and you know, you might meet another person in Florida who knows who we are, but when you leave this state, more than likely they're not going to know who we are and we have to educate them. That might see a beautiful skirt, but they don't understand why we wear it," she says.

They wear it because it identifies this small tribe as Seminole. And it sparks the curiosity of anyone who sees it. If yours has been sparked, check out The Seminole Tribal Fair and Pow-Wow at the Hollywood Hard Rock Casino, the first weekend in February.

Reporting for this story comes in part from the Florida Humanities Council and Florida Cultural Resources, Tarpon Springs.