Accessibility links
'Mi Familia' In Movies: Films Mexican-American Millennials Grew Up On : Code Switch The bush-disguise bit in Born in East L.A. The murder scene in Selena. I watched these dozens of times as a kid, but as an adult, they've come to mean more.

'Mi Familia' In Movies: Films Mexican-American Millennials Grew Up On

'Mi Familia' In Movies: Films Mexican-American Millennials Grew Up On 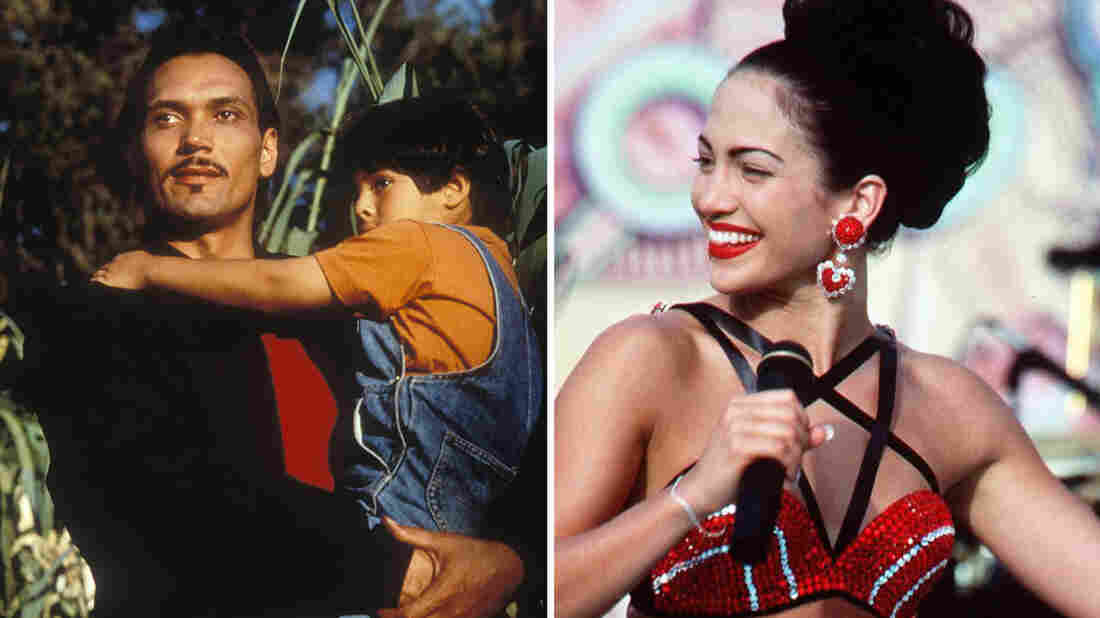 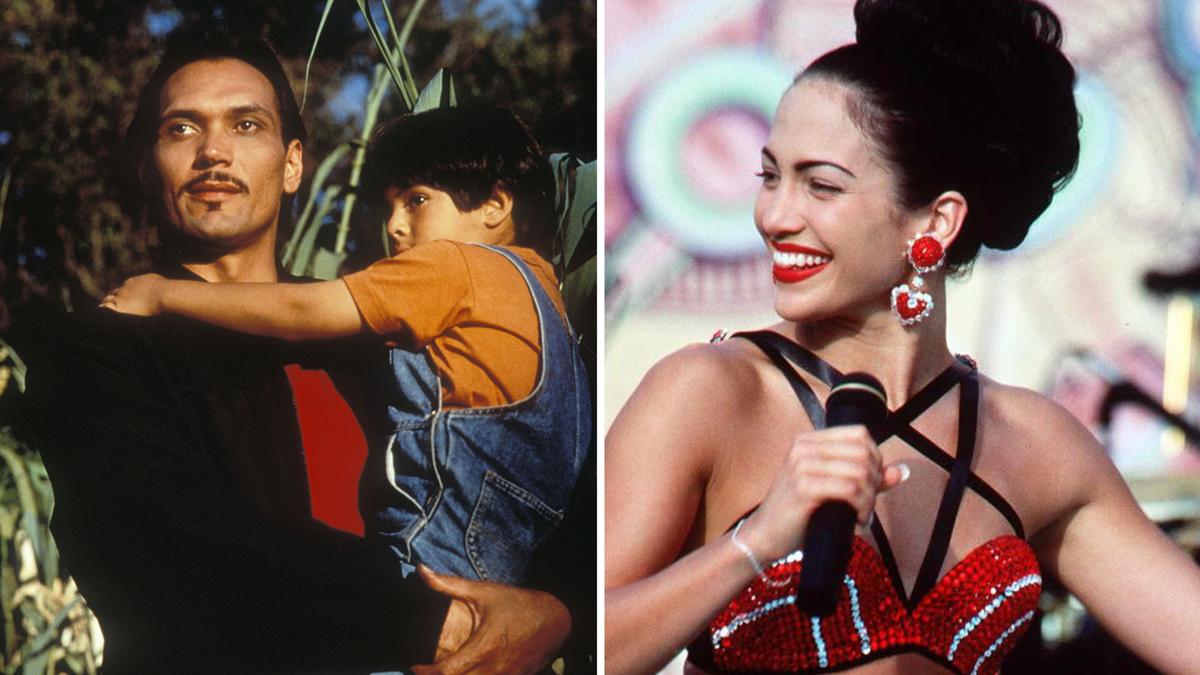 At left, Jimmy Smits in My Family. At right, Jennifer Lopez in Selena.

At Code Switch, we like movies. We like to talk about movies. (Apologies to the newscast folks who have to sit near us.) Recently, we got into this big discussion about movies we watched over and over again growing up — not just because they're good, but also because, in one way or another, they reflected our lives as people of color in the United States.

When I was a kid in Southern California, there were several films that helped me make sense of what it meant to grow up Mexican in the States. If you're Latino and have seen these, you probably quote from them liberally. If you haven't, go watch them this weekend!

When I was growing up, my family often visited Tijuana, a two-hour drive south of our house in Orange County. I knew we were getting close when the freeway divider suddenly shot up 6 feet, a barrier to discourage migrants who'd already hopped the fence from making it across Interstate 5. It let us know we were entering the borderlands.

Right around this point, my mom would turn to the back seat and say something like, "You know, your dad came through here." Then my dad would tell us stories of crossing into the U.S. in the '70s, hiding from Border Patrol under bridges or curled up in the trunk of a car. In his retelling of these cat-and-mouse chases, he was always just a little bit cannier than his pursuers. He wanted to get into the U.S. more than they wanted to keep him out.

His stories always reminded me of Born in East L.A. The film, written, directed by and starring Cheech Marin, is a satire about a Los Angeles-born Chicano named Rudy who gets mistakenly rounded up during an immigration raid at a factory and deported. He ends up stuck in Tijuana because immigration officers don't believe he's a U.S. citizen. Hilarity ensues as Rudy tries again and again to get home.

In one scene, after hopping the border fence, Rudy is trekking through the hills of southern San Diego County with a bush strapped to his back. When he spots a Border Patrol agent, he crouches down like a desert scrub. Thinking he's in the clear, he ditches the disguise. Then he sees another agent. He ducks behind some nearby foliage in the nick of time. But it turns out he's dived right into a Border Patrol truck that's also in disguise — as a much larger bush. Back to Mexico!

Born in East L.A. was made at a time when illegal immigration into the U.S. was on the rise, and so was border enforcement. By 1987, when the movie hit theaters, crossing at San Diego was a lot harder than when my 15-year-old dad first tried it in 1975 (though not nearly as hard as it is today). Rudy's repeated failures to cross reflected this. But the movie's more incisive point was the absurdity of Rudy's dilemma: He'd been deported from his own country, and then had to sneak back in.

Marin's movie was hilarious, but also a warning about how anti-immigrant sentiment can become a convenient proxy for anti-Latino racism. That's one reason Born in East L.A. remains as relevant today as it was in 1987.

Over the holidays, I drove my dad (a U.S. citizen since the early '90s) to the Tijuana airport. Today, whenever we're near the border, we often remark on how tall the fence has gotten. Could he have crossed if it had been like this back then? I asked him.

As my dad got out of the car to cross into Mexico, I double-checked to make sure he had his passport.

My Family, Mi Familia tells the story of the Sanchez family over three generations. It starts with the patriarch's migration from Mexico to Los Angeles in the early 20th century and tracks the Sanchezes through the 1980s, by which point the family is undeniably American, yet still struggling with the complexities of what it means to call yourself American if you aren't white.

Along the way, the Sanchezes deal with illegal deportations during the Depression, police brutality and racial tension during the '50s, and anxieties around assimilation when one of the Sanchez sons is engaged to a white woman in the '80s.

There is nothing remarkable about my favorite scene in the movie. It has no bearing on the plot. But I love it because it captured a detail of bicultural Mexican-American life so small, so seemingly perfunctory, that only a writer who lived it would have cared, let alone had the cultural knowledge, to write it into a screenplay. (Director and co-writer Gregory Nava grew up in San Diego but regularly crossed the border to visit family in Tijuana).

In my favorite scene, it's 1950s Los Angeles and the Sanchez family is sitting in their living room, its walls painted a bright pink common in Mexican-American households. They realize I Love Lucy is starting — "Hey, it's time for Lucy!" "I love that show, mamá!" — and they flip on the TV. A little later, they'll hear gunshots outside, leading to the film's most tragic scene, but my favorite part of the whole movie is when they tune in to watch that zany redhead and her antics.

The Sanchez family watches "I Love Lucy" together in their living room in "My Family."

Why? Because growing up, "Put on Lucy!" was a constant refrain in our house, too — most recently on Christmas Day, in fact. I Love Lucy has been my mom's favorite show since she was a girl growing up in the barrios of Orange County. Lucy was hysterical, and she and Ricky Ricardo were network television's first mixed-race couple. For most Americans, his hot-blooded, and, yes, stereotypical, fits of anger, spewed in Spanish, were meaningless gibberish. But unlike many viewers, my mom actually understood what he was saying, which made it even funnier.

Nava pumped the film full of these seemingly insignificant details. And the cumulative effect was that My Family became a richly textured film in which many Mexicans and Mexican-Americans could see bits and pieces of their own families, even if not every aspect of its story mirrored their own.

Selena's music was the soundtrack of our Sunday mornings. Actually, it was our alarm clock. When "Amor Prohibido" started blasting from the dining room stereo — and I mean really blasting, with my mom singing along — my brother and I knew it was time to get up and do our chores.

When the Tejano music pop star was shot and killed at age 23 in 1995, it's not a stretch to say it felt like losing family. A few years ago, a friend and I were talking about where we were when we learned that Yolanda Saldívar, the president of Selena's fan club, had shot her. I remembered sitting in the living room with my parents watching coverage of the standoff between Saldívar and police on a Spanish-language news channel.

The memory was vivid: Saldívar had barricaded herself in her truck, tears flowing, a gun in one hand, a phone in the other as she spoke to a police negotiator. "Look at what I've done to my best friend!" she sobbed. "I want to talk to my mother!"

I told my friend I remembered Saldívar's shaky, miserable words like it was yesterday.

"They didn't show that on the news," she said.

It hit me. She was right. The camera crews that showed up the day Selena died were far from the action. There's no way they could have picked up what Saldívar was saying to the cops. How had I misremembered that?

Selena the movie, which came out in 1997, two years after the singer's death, cemented her legacy as Mexican America's darling. It told the story of her childhood and her rise to fame. It painted a portrait of a talented, sexy yet wholesome, humble, almost flawless star cut down in the prime of her life. As kids, we watched the movie constantly. And at some point, Selena the movie imprinted on my childhood in a way that became almost indistinguishable from Selena in real life.

This scene didn't actually happen on the news - just in the movie's retelling.

This was true for a lot of Mexican- and Latino-Americans. The late Lupe Ontiveros, who portrayed Yolanda Saldívar in the movie, once said that for years after the film came out, Selena's fans would hiss at her when she was in public places. She would have to explain that she shared their feelings.

A friend of mine in college had a picture of Selena on his desk — except it wasn't Selena. It was a picture of Jennifer Lopez as Selena in the movie. I never asked whether he knew that, although now I wonder.

Today, many of the references we make to Selena when talking about her come from the movie, not from her own mouth or things that actually happened. Say this line to any U.S.-raised Mexican child of the '90s — "Anything for Salinas!" — and he or she will tell you it was spoken by two awestruck and sheepish cholos who helped out when Selena's tour bus got stuck in a ditch.

Did that even really happen? I have no idea. And I guess I don't really care. For young fans like us, Selena the movie mattered almost as much as Selena's music because it gave us a way to connect with her story. When Selena died, we were old enough to love her, but too young to fully grasp her importance to our community. Then the movie came out, and we understood.

These are only a few of the Mexican-American movies I watched growing up. There are a bunch more — La Bamba, El Norte, Stand and Deliver. What movies did you watch as a little person of color, and why were they important for you? Let us know in the comments or tweet us @nprcodeswitch.