Accessibility links
I Guess We Gotta Talk About Macklemore's 'White Privilege' Song : Code Switch You won't have any thoughts about the rapper's new song about racial inequality, and his place as a white dude in hip-hop, that you didn't have before, in part because he plays it so safe.

I Guess We Gotta Talk About Macklemore's 'White Privilege' Song

I Guess We Gotta Talk About Macklemore's 'White Privilege' Song 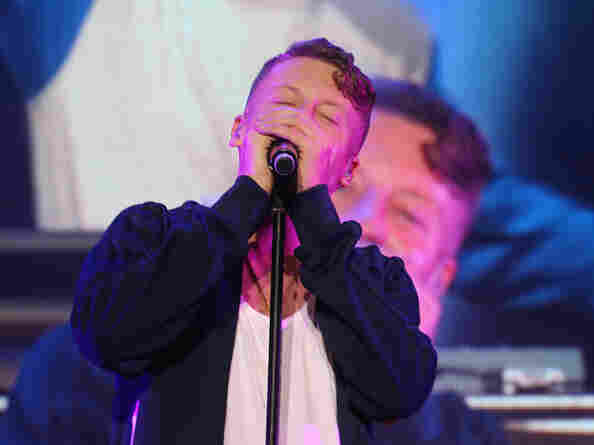 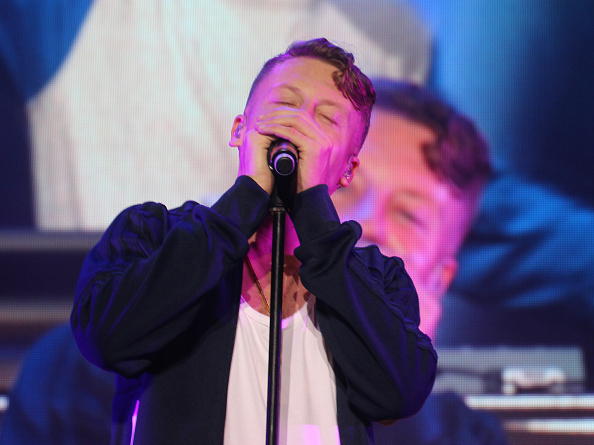 Macklemore performs onstage during the Capital One Orange Bowl Beach Bash in December in Miami Beach.

By now you've heard — or heard about — the white Seattle rapper's nine-minute song "White Privilege II," about his tricky relationship with hip-hop and black protest movements. It's typical Macklemore — earnest, more than a little hamfisted — and it's terrain he's trod in prior interviews and on 2005's "White Privilege." (Sample lyric from the '05 track: "Where's my place in a music that's been taken by my race?") He is your woke ex-boyfriend.

My colleague Audie Cornish at NPR's All Things Considered talked to Macklemore and Jamila Woods, a young black woman he collaborated with on the new song, on Wednesday. (You can check out their conversation on Friday's broadcast.) I watched the interview and got the sense that the meta stuff surrounding that conversation was more fruitful ground for inquiry than the song itself — like, say the dynamics between the Grammy-winning white celebrity and the little-known black female singer brought in to lend her talents, her thoughts, and yeah, her blackness, to what will inevitably be seen as his project.

Macklemore and Woods didn't know each other before working together on the song, and they recalled to Cornish some pretty intense exchanges over the lyrics and the point of view. There's no evidence of that heat or messiness in the resulting song, though.

Ultimately, what you think about "White Privilege II" will probably have as much to do with your already calcified opinion of Macklemore as it will with your thoughts about the song's premise — that whiteness confers a constellation of both quantifiable and quieter advantages in American life. Macklemore knows that people think he's part of the problem, and we know he knows, and he knows we know he knows, ad infinitum.

That's part of what's tricky in engaging with this song, and what you pick up on hearing Macklemore talk about it. He's at ease with the argot of social justice, which, like all jargon, can be obfuscatory and insulating. In the song and in interviews promoting it, he never ambles too far from his vetted set of talking points. But I came away from the interview with Cornish feeling like he's genuinely trying to work all this stuff out while also gingerly avoiding landmines.

Outside of the catharsis for Macklemore, though, it's not clear just who the song is for. Assume that it was meant to convince the many people who reject the entire notion of white privilege. Is there any chance those people are going to sit down with a nine-minute hip-hop song called "White Privilege II"?

Perhaps "White Privilege II" is meant for young people who are just starting to try on these ideas about relative dis/advantage for size, the kids who are coming to their political awakening in a post-Ferguson world. It's not clear that a nine-minute treatise that works better as a thinkpiece than it does as a song is the best delivery mechanism for that, but it's certainly not counterproductive. (But surely Macklemore was going for more than "not counterproductive.")

I'm not so sure Macklemore knows who this song is for, either. Prior to the song's launch, his press people repeatedly reached out to me and a few other folks in "the race space," urging us to cover it. His PR folks felt a little thirsty for coverage — as is the wont of press flacks — but given the subject matter, it all seemed a bit short on self-awareness. Hey, black people who write about race stuff all day! Macklemore's got some incisive thoughts on white privilege, and you're gonna want to hear them!

(Their entreaties came precariously close in tone to Macklemore's infamous text to Kendrick Lamar after beating him out for a Grammy in 2013; his people really want you to get how much he Gets It.)

It's worth noting that Deray McKesson, one of the faces of the Black Lives Matter movement, has argued that this song does exactly what lots of people say they want more of in conversations about race — that is, it would be great if more white folks actively engaged in uncomfortable conversations about race with each other. McKesson's note was ostensibly an endorsement, but it's also an acknowledgement that this song is not really meant for people of color. That would seem to underscore Macklemore's larger existential dilemma regarding his relationship to black audiences: He really seems to want to be talking to us, but he's not saying anything we don't already know.