Accessibility links
Dear White Artists Making Music Videos In India: Step Away From The 'Holi' Powder : Code Switch Yes, this is about the new Beyoncé-Coldplay music video for "Hymn for the Weekend," which also features levitating sadhus, a child painted blue to resemble Hindu gods, and fire-breathing. 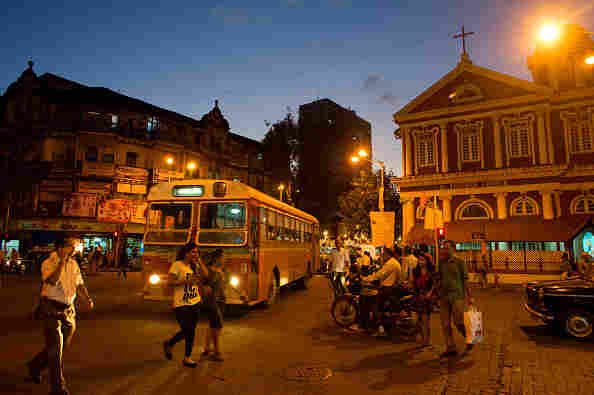 Oh, weird, a street scene in Mumbai where everything isn't covered in neon clouds of dust. Is this really even India? Subhendu Sarkar/LightRocket via Getty Images hide caption 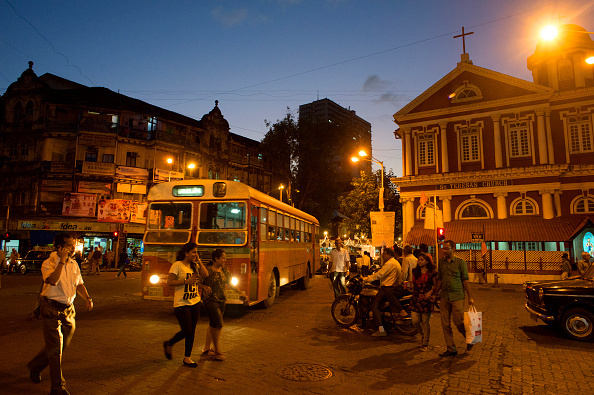 Oh, weird, a street scene in Mumbai where everything isn't covered in neon clouds of dust. Is this really even India?

When some Western musicians picture life in India, they seem to think you can't turn a corner without someone blasting you in the face with brightly colored powder.

Like, you get a knock on the door, and it's the delivery guy, but he can't just hand you your bag of food and be done with it. First, it's two fistfuls of mustard yellow to the head and chest area, and then a little peacock green down your shirt 'cause you didn't tip.

Or your friend meets you at the movies, and it's like, "Hey, Sangeeta, you are looking nice, how was your weekend, also BOOM HERE IS A QUARTER-KILO OF MAGENTA POWDER UPSIDE THE HEAD."

And then you finally hit the hay at night, after a long day of dodging Lisa Frank dust bombs at the call center, and right before you plug in your phone and switch off the light, you take a big fistful of cotton-candy-blue powder, screw your eyes shut and let it rip. Sweet dreams, dustheads!

Yes, this is about the new Beyoncé-Coldplay music video for "Hymn for the Weekend," which also features levitating sadhus, a child painted blue to resemble Hindu gods, Beyoncé's henna'ed palms doing swirly "Indian hands," and fire-breathing.

The video's release over the weekend unleashed predictable waves of eye-rolling across social media and blogs, with many groaning over the propensity of American and British bands to film Indians throwing powder and colored water at each other in a semblance of holi, the "festival of colors." If you learn nothing else from the backlash, let it be this: Understand that holi is not some sort of never-ending game of modified paintball raging 24/7 in the streets of Mumbai. It's a specific event that occurs at the same time every year, and for a lot of Indians, it's just not that big a deal.

Let me put it this way: Imagine if when Indians closed their eyes and pictured America, they saw giant nightmare knots of red and green Christmas lights strung up everywhere, year-round, hanging off trees and pooling on the sidewalks, swallowing people whole in line at Chipotle. We'd make fun of them, and think they were hopelessly provincial and more than a little clueless.

Lots of smart things have been said about other aspects of the video, from charges of cultural appropriation to the suggestion that Chris Martin should have known better, having actually spent time in India, to Bollywood's own terrible track record when it comes to depicting other cultures.

"The India of 'HFTW' is an India that bears very little relation to the real India, which is complex beyond belief," writes Priya-Alika Elias over at Teen Vogue, about the video. "In the real India, Bollywood is a billion-dollar industry that is better signified by glossy studio banners than decaying projectors or peeling movie posters. In the real India, many of the holy men are hustlers and the poverty isn't necessarily picturesque. But it's so much easier, so much simpler to talk about India as an exotic land where sadhus do the Great Indian Rope Trick, because that's what white people are comfortable with."

I fully get that music videos are largely about escapism, and celebrities dressing up in fabulous clothes, and dreamy landscapes, and that's all fine. Just understand that in the age of Twitter and think pieces, the days in which white musicians could use black and brown people as props without expecting widespread scrutiny, mockery or pushback are rapidly drawing to a close.