Accessibility links
In Conversation About Diversity In Hollywood, Where Does Sundance Fit In? : Code Switch Sundance may be just one part of a much bigger puzzle, but filmmakers of color say it has an important role to play.

In Conversation About Diversity In Hollywood, Where Does Sundance Fit In?

In Conversation About Diversity In Hollywood, Where Does Sundance Fit In? 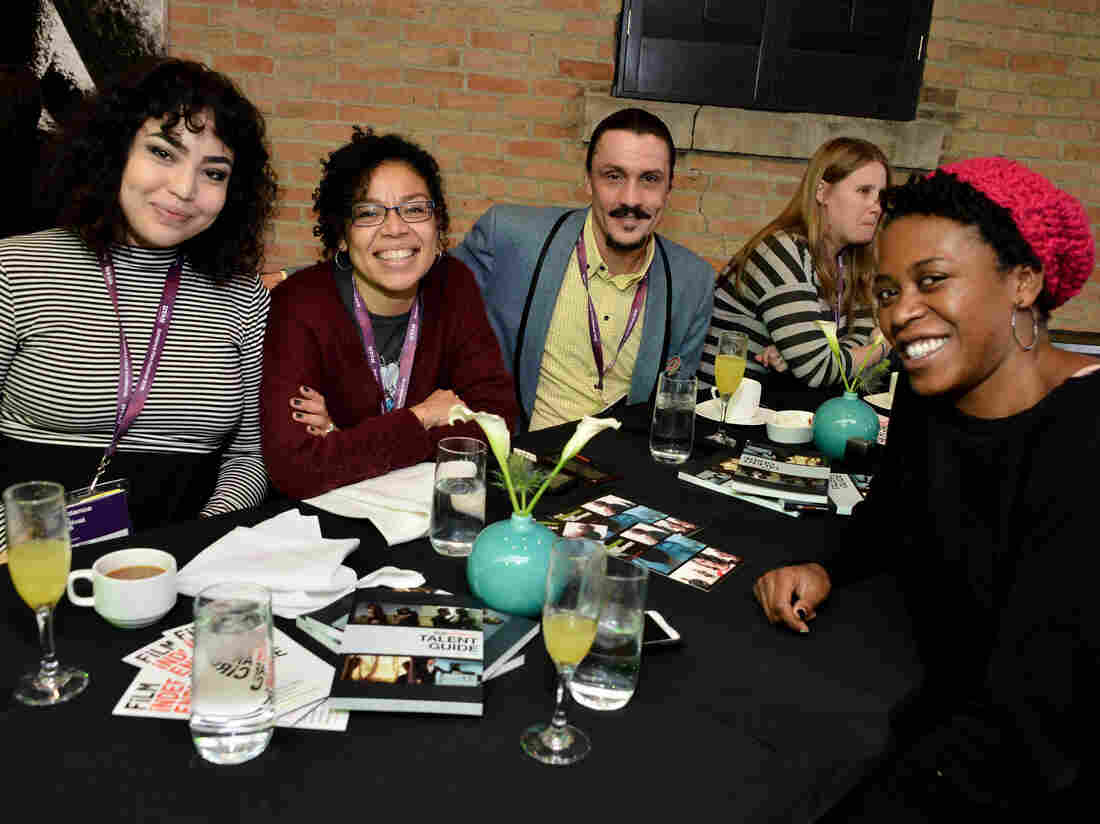 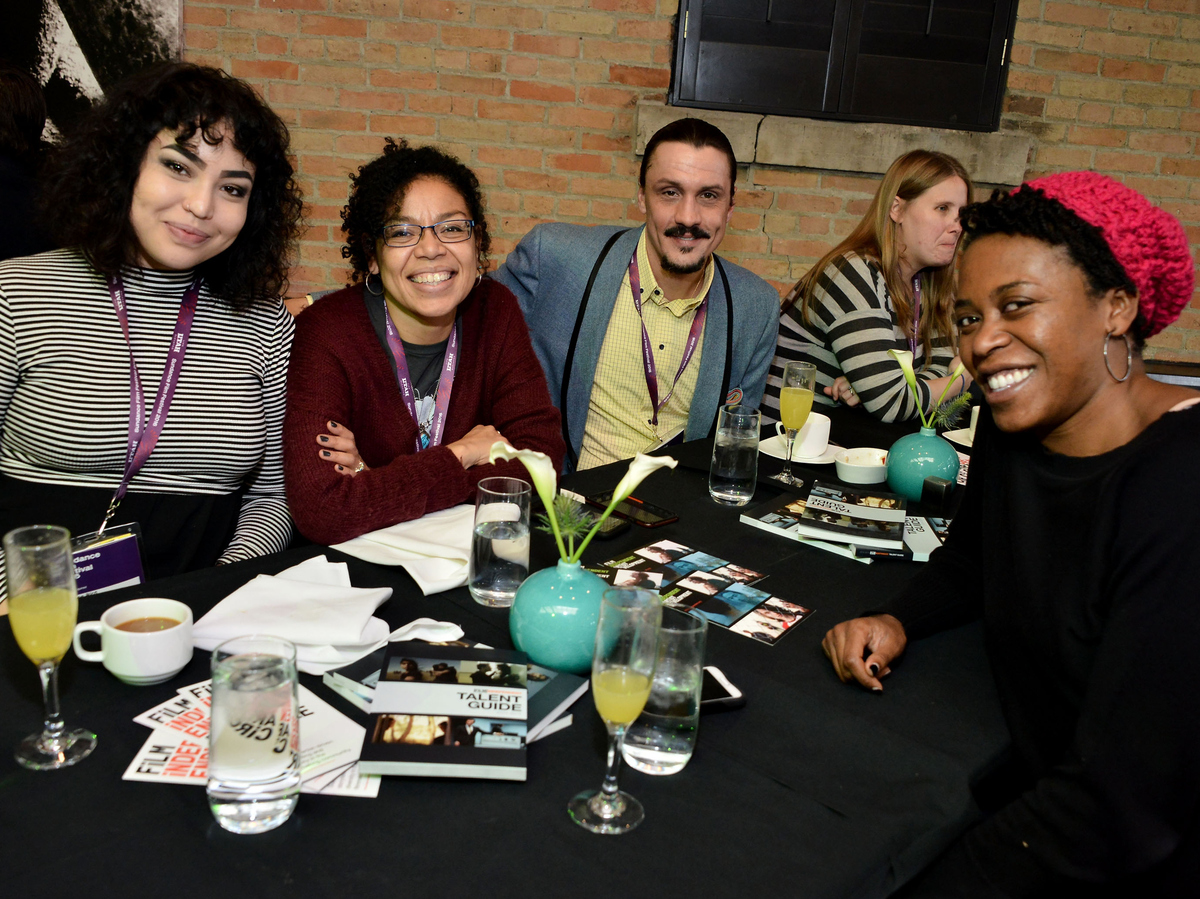 When the Sundance Film Festival kicked off last month, the subject of diversity was in the air. Just days after the Academy of Motion Pictures rekindled the debate on #OscarsSoWhite, thousands of filmmakers and journalists decamped to Park City, Utah's snowy mountains to discover new indie gems and meet the auteurs of tomorrow.

But with renewed attention on who's behind the camera, the debate turned to the festival itself, with questions on which kinds of movies tend to make it into the prestigious event, which don't and what role Sundance plays in the bigger picture of Hollywood diversity.

During Sundance's opening press conference, creator Robert Redford fielded the diversity question directly, saying "diversity comes out of the word independence. That's the principle word that we operate from." He pointed to greater support for independent creators outside the studio system — which is what Sundance aims to do — as one answer to the industry's lack of diversity.

Conversations with several filmmakers and critics of color during the festival suggest that while Sundance could never be a silver bullet in fixing Hollywood's diversity problems, it indeed has an important role to play.

Bird Runningwater, director of Sundance's Native American and Indigenous Program, says Sundance can point to three decades of experience championing and funding the works of marginalized filmmakers. After a lengthy career in philanthropy and nonprofits, Runningwater, a descendant of Cheyenne and Mescalero Apache peoples, became involved with the Institute's Native Lab, which helped to develop and workshop movies like Drunktown's Finest, Miss Navajo and Four Sheets to the Wind. Since the program began in 1981, about 300 Indigenous filmmakers have received grants, lab fellowships, training and mentoring.

Diversity In Hollywood: Here's What Critics Are Saying About Round 2 Of #OscarSoWhite

Runningwater says the Sundance Institute (the company umbrella that includes festivals and various workshops) has always taken an interest in the work of diverse filmmakers. "The work with Native filmmakers actually precedes the Institute because of [Sundance co-creator Robert] Redford's work with Native communities early on in his career," he said. Part of the Native Lab's history can be traced to early Institute founders Larry LittleBird (Taos Pueblo) and Chris SpottedEagle (Houmas Nation). "When Sundance was founded, it was one of the threads of work that [Redford] wanted the Institute to serve," Runningwater said.

After launching its Native American and Indigenous Program, Sundance began experimenting with new career-building opportunities for a variety of communities often excluded by the Hollywood system. Now aspiring filmmakers can apply for the Latino Screenwriting Project, Asian American Feature Film Fellowship and the Women in Sundance Program.

"I think Sundance at the very least makes more of a concerted effort than many other festivals," says Huffington Post culture writer Zeba Blay. "We've seen films written and directed by black folk (Dear White People, Fruitvale Station and Dope) get lots of buzz and go on to do incredibly well after debuting at the fest." She said that the Sundance Institute "has explicitly defined diversity as one of its core values."

The buzz around this year's major Sundance offering The Birth of a Nation is even louder than last year's hype around Dope, culminating in a $17.5 million deal signed by Birth director Nate Parker and Fox Searchlight and a standing ovation in Utah.

But Sundance's efforts are just one piece of a much larger, very complicated puzzle, Blay cautions. "At the end of the day, the industry as a whole is still broken," she says. "The talent is there, but they have to work twice or three times as hard to generate the kind of interest that leads to distribution and further opportunities."

This was also a concern shared by Women & Hollywood blog editor Melissa Silverstein. "There's a huge disconnect for women and people of color," she said. "You can get into the competition, but as you move up the pipeline and the level of prestige increases, as the amount of money increases, and as business comes into the equation, you see less and less women and particularly, less and less women of color."

This year, Sundance showed 61 films by women and six from indigenous filmmakers. Stats for other filmmakers of color weren't readily available, which is one of the issues Runningwater and his team are working to address. "It's self-identification on the filmmaker side of things," he explained. "Some people don't want to answer the question because they think it will hinder their chances. Other people are excited to answer because they believe it's important to report the numbers." He estimated that there were about 30 filmmakers of color in this year's festival lineup of around 200 feature length and short films.

The increased attention on underrepresented filmmakers excites Sonita director Rokhsareh Ghaem. The Iranian director believes the digital revolution is behind the increase of female filmmakers from around the world. "Documentary filmmaking is now very cheap. In my country, there were few cameras for men who wanted to shoot on film," she said. "You can now buy or rent a camera easily or use your phone. It gave women a lot of freedom to tell their stories." Of course, technology has not erased female filmmakers' problems, she says. "There's still economic discrimination against women."

First-time director Maya Goded, whose film Plaza de la Soledad was showcased in the Sundance World Documentary Competition along with Ghaem's, said she prefers to work outside the Hollywood system to continue profiling the subjects she has worked with for more than 20 years. Her film follows a group of prostitutes in Mexico through their daily routines. She insists that stories like hers are meant for everyone at Sundance, not just a niche group. "My protagonists are Mexican, but I think the story is universal. The themes are universal," she said.

With an increased focus on storytellers from all backgrounds, there's greater potential that movies like Sonita and Plaza de la Soledad will find larger a audience. But according to Huffington Post's Blay, there is more behind-the-scenes work to do on every level of the industry. "In addition to equipping minority filmmakers with the tools and the resources to tell stories, I'd like to see more POC programmers, executives and buyers being included in figuring out a solution to the problem," she says.

Women & Hollywood's Silverstein agreed that although Sundance is diligent in its programming and fellowship efforts, it could do more. She urges all film festivals, not just Sundance, to better represent their communities' stories. "If your [film] roster is not reflective of the world out there, you need to go back and you need to try harder," she says.

Sundance's Runningwater is optimistic that the conversation around diversity will move into action from the studios. "We do our job to highlight the most interesting discoveries we're able to provide. How the industry responds to us is always a huge question," he says. "There are a lot of surveys coming out from all the guilds that are starting to do their own research and analysis about what makes it into the system and who gets hired, who has the privilege to work in that system. I'm hoping the industry will respond to that critique."

Monica Castillo is a writer and critic based in Los Angeles. She has traveled to several film festivals, met a few movie legends and has some great stories about hitchhiking to red carpet premieres.