Accessibility links
Got A Second For 'Haikus With Hotties'? Now You Can Enjoy Them All Year : Code Switch "Haikus with Hotties" is more than just a cheeky calendar — it's challenging the way Asian-American men are portrayed in the media.

Got A Second For 'Haikus With Hotties'? Now You Can Enjoy Them All Year

Got A Second For 'Haikus With Hotties'? Now You Can Enjoy Them All Year 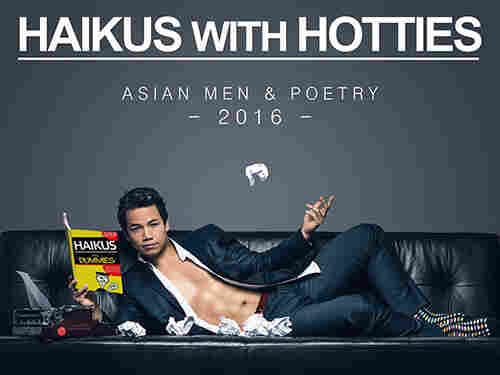 In my house growing up, the walls of every room — including the bathroom — were decorated with several calendars. (Is this a Chinese-American thing? An immigrant family thing? I've always wondered.)

Subject matter didn't matter. My mom tacked up the glossy freebies mailed to us by various insurance companies, featuring flowery landscapes and vintage muscle cars. These hung next to the calendars handed out to customers at the 99 Ranch grocery checkout line, which featured the same image all year long: the Chinese character Fu — "luck" — rendered in brush calligraphy and gold foil on crimson card stock.

These days, I rely on a digital calendar synced to my email and smartphone; I couldn't tell you the last time I consulted a paper calendar hanging anywhere, least of all the bathroom (though at my mom's house, that decorating choice still persists).

But I recently came across a tweet from Phil Yu, the Angry Asian Man blogger, about an intriguing new Kickstarter campaign: the Haikus with Hotties 2016 calendar.

Now, if the producer of Asian-America's pre-eminent news and pop culture site deems something #veryimportant, I of course have to click to find out more. Also — OK, fine — maybe it had something to do with the picture attached to the tweet: two shirtless men lounging at the beach with neon floaties hugging their tanned, chiseled abs. 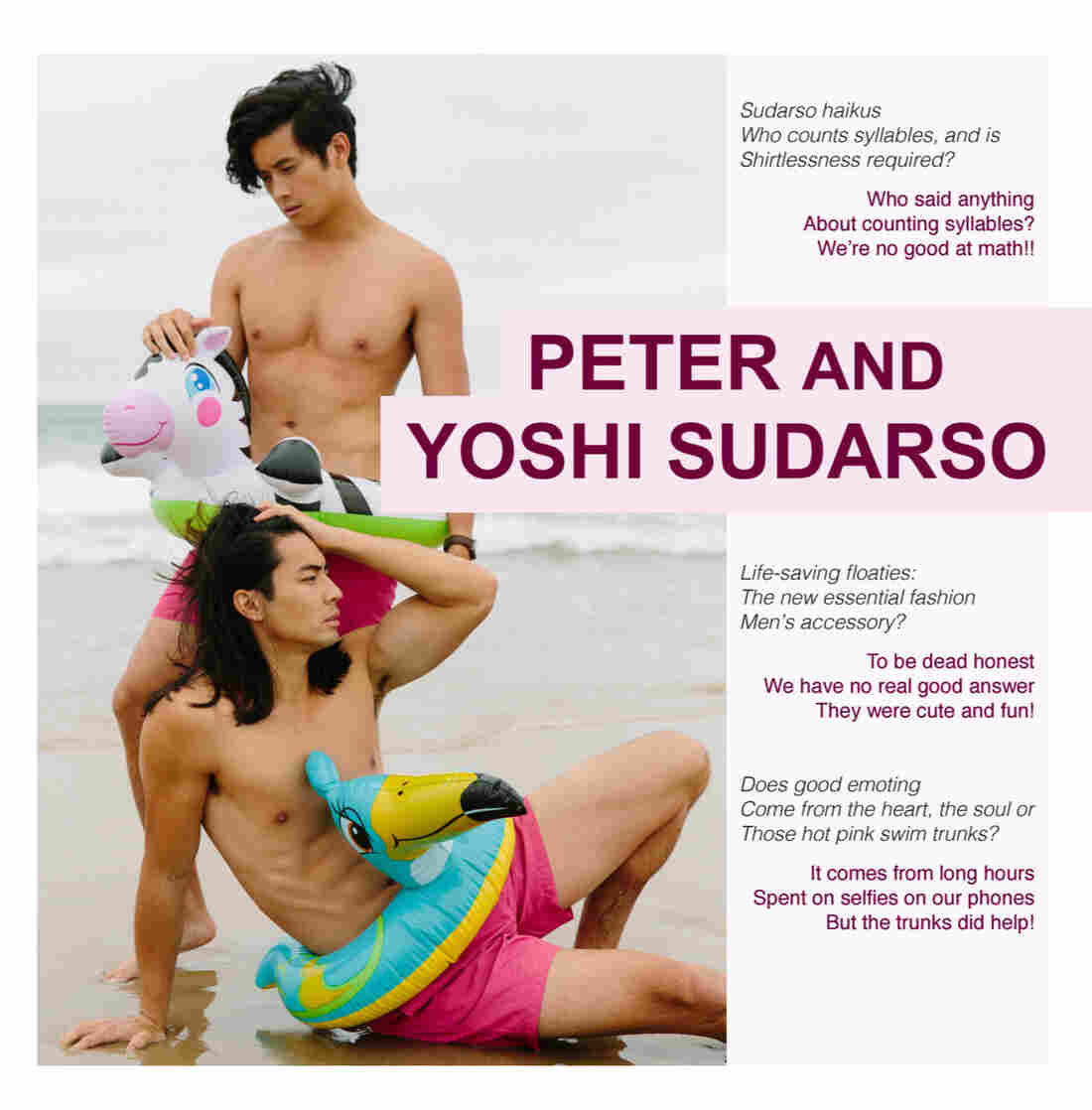 Brothers Peter and Yoshi Sudarso are YouTube stars. Here they are at the beach. Courtesy of Haikus with Hotties hide caption

The "hotties" in question were Yoshi Sudarso and Peter Adrian Sudarso, Chinese-American actors who also make comedy videos on YouTube. In August, the Sudarso brothers appeared in Audrey Magazine, the Asian-American women's lifestyle publication, as a part of "Haikus with Hotties," a photo-and-poetry series that runs in every issue. Interview questions are posed in the 5-7-5-syllable haiku verse scheme, and must be answered in form. One choice poetic exchange from Audrey's collaboration with the Sudarsos:

come from the heart, the soul or

It comes from long hours

Spent on selfies on our phones

But the trunks did help!

Ada Tseng, a former contributing editor at Audrey, conceived of "Haikus with Hotties" back in 2013 when the magazine assigned her to interview Godfrey Gao, the Taiwanese-Canadian model/actor named "the world's first Asian male supermodel" after appearing in an ad campaign for the luxury brand Louis Vuitton.

"It was going to be an email interview," Tseng explains, and she wanted to find a way to have fun with it. Gao agreed to the idea of writing haiku, and the series was born. 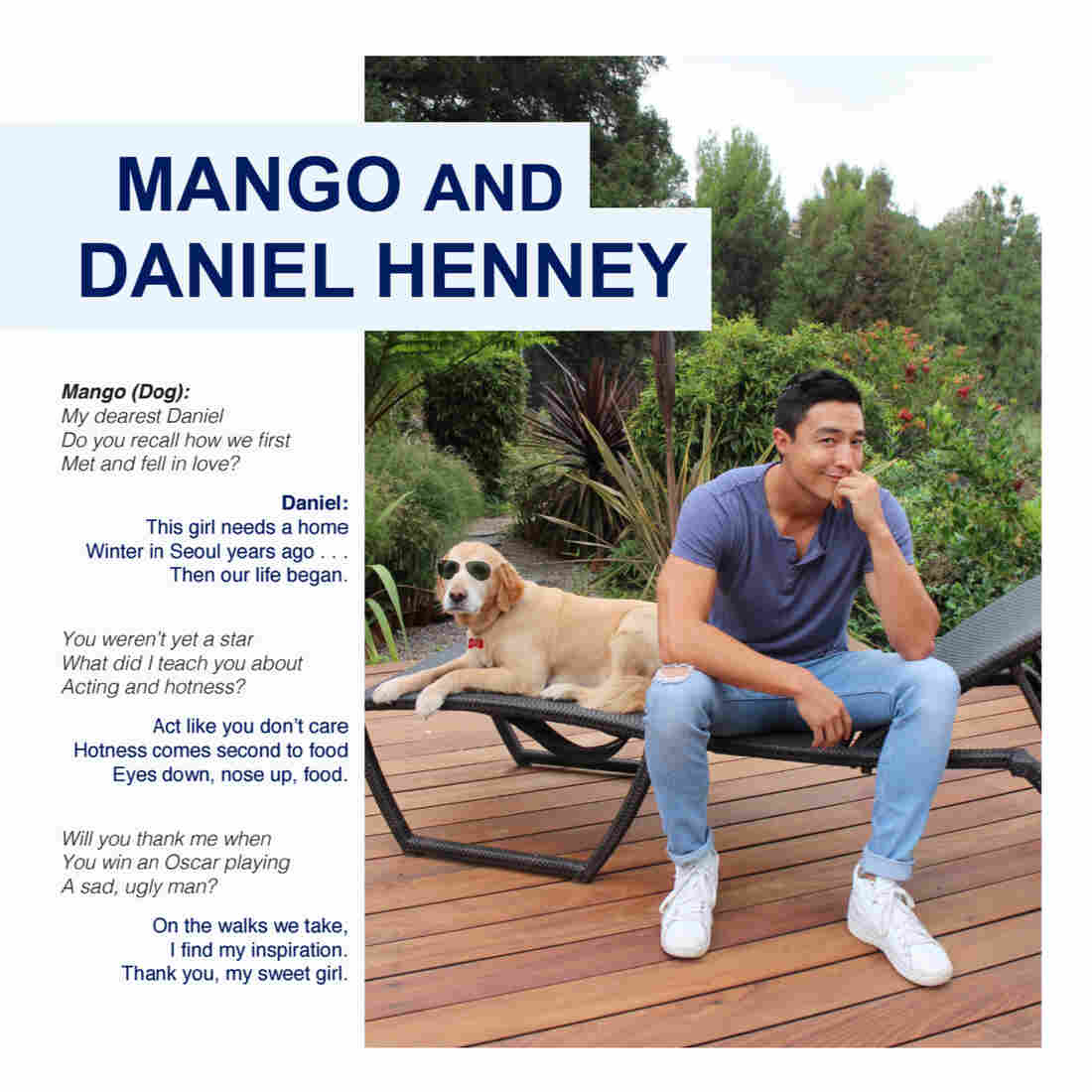 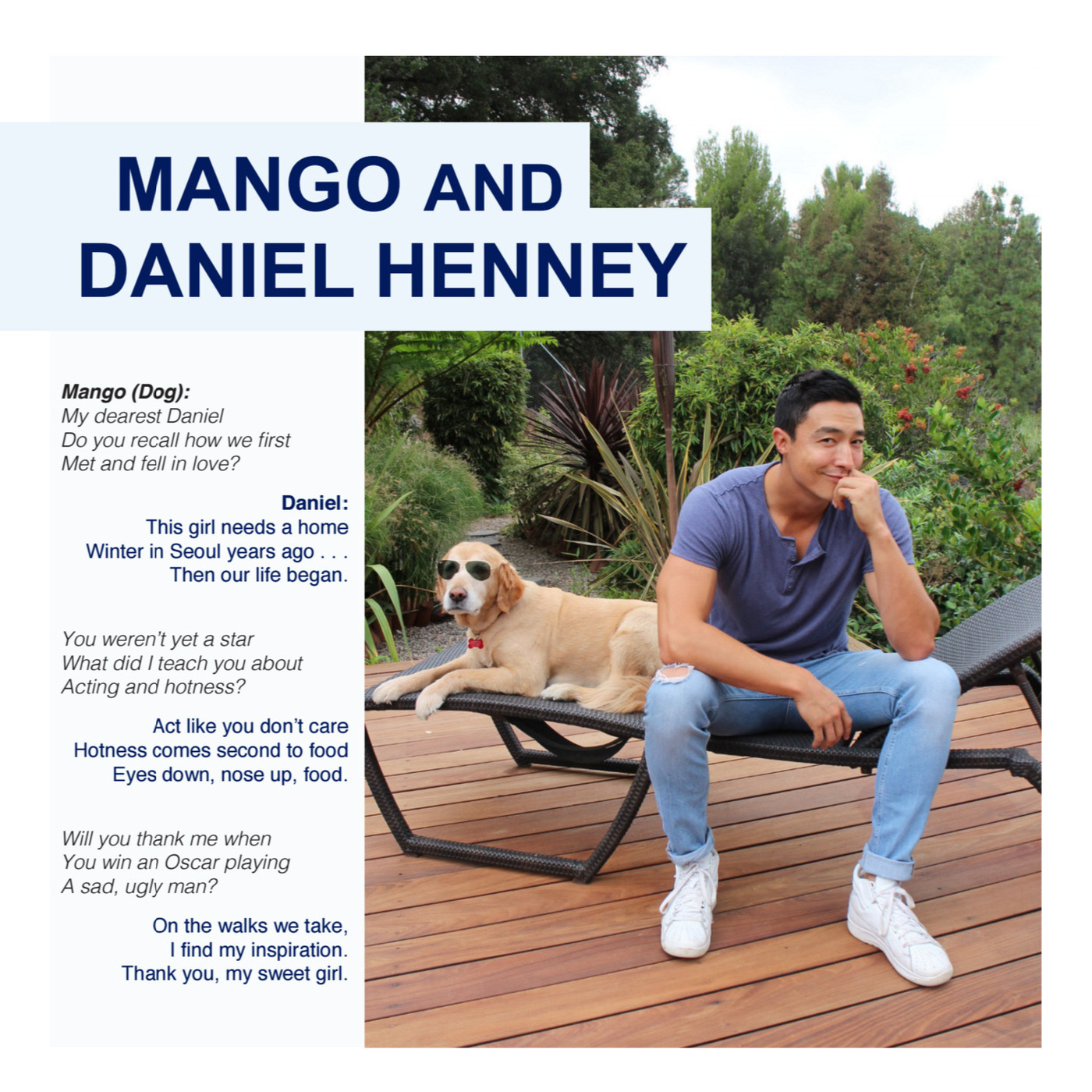 Daniel Henney and his dog, Mango, pose for the Haikus with Hotties calendar.

Courtesy of "Haikus with Hotties"

Since her interview with Gao, Tseng has exchanged poetry with several Asian and Asian-American men of aesthetically pleasing genetic dispositions and/or physical prowess for the magazine, including comedic actor Randall Park (Fresh Off the Boat, The Interview), and Yen Chen, the piano prodigy turned American Ninja Warrior game-show competitor.

Last summer, Tseng and Audrey decided to mount a Kickstarter campaign to collect the magazine's photo series into a 12-month wall calendar for 2016, adding six more Asian-American "hotties" to round out the year, plus a cover model (that honor went to Shannon Kook, a hapa Chinese actor from South Africa).

A freelance journalist and editor, Tseng is a longtime contributor to Asia Pacific Arts and Xfinity Asia and is the host and producer of Bullet Train, a podcast on Asian-American culture and arts. When we chatted about the calendar and her work for Audrey and other culturally specific media outlets, Tseng could be wryly facetious — "Maybe some people supported the calendar because they think there isn't enough representation of Asian-American men in Hollywood ... but really, it's probably just people who think these guys are hot, right?" — and then absolutely sincere about her belief in the power and influence of diversity in pop culture and media representation.

"You see the statistics, for example, of how with online dating, Asian-American men are the least desirable," she says. "For me, that's so strange. I've been covering Asian and Asian-American pop culture for so long. If you watch Korean dramas, or Bollywood films, how could you not find the men attractive?"

There's been a lot of discussion lately on how race and ethnicity affect success in romantic matches. An OkCupid report surveying data from 25 million accounts from 2009-2014 revealed that Asian-American men were consistently rated the least attractive (in comparison with black, Latino and white men) by non-Asian women.

Racial Preferences in Dating, a 2008 Columbia University study of more than 400 individuals in speed-dating sessions, found that while women of all races expressed a higher preference for dating a man of their same race, non-Asian women were up to 65 percent less likely to indicate interest in seeing an Asian-American man again after the four-minute speed date, the highest rate of rejection across the board.

Of the 14 men featured in the Haikus with Hotties calendar, 13 are pursuing careers as entertainers (the sole exception being Mr. December, Viet Pham, a chef from Utah who bested Bobby Flay on Iron Chef America), including several viral video producers, a stand-up comic, a reality TV star, and actors with credits in film and television. "There was a political angle to the calendar, that there should be more hot Asian men in Hollywood," says Tseng. "I would guess that most of the guys, if not all, in the calendar have been asked about this issue at some point in their careers." 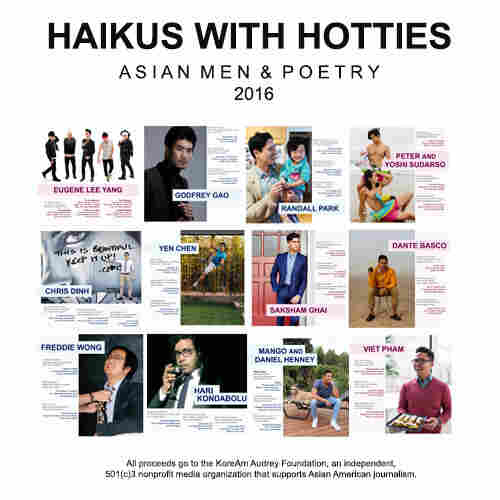 All the "Hotties," all in one place! Courtesy of Haikus with Hotties hide caption

Tseng launched the Kickstarter with a modest goal of raising just $1,000 to prove there was interest in such a project. One of the pledge levels, "Be The Change You Want To See," promised backers that in addition to getting a calendar of one's own, a second would be shipped to a Hollywood casting agency "with a note telling them to cast these hot Asian-American male actors in their upcoming projects."

Within three days, the project was fully funded by nearly 100 backers who more than doubled the original goal.

"I didn't know who would be interested in this," Tseng says with a laugh. "My guess was that it would be people like me, other Asian-American women, people who read Audrey." She discovered, however, that the Kickstarter backers weren't entirely Asian, at least going by their last names. "It seems much more diverse," she says.

As for Twitter feedback, Tseng says, "We got a mix of both men and women, and LGBTQ supporters of the calendar." A quick search for the hashtag #HaikusWithhotties turns up pages and pages of exuberant fans, many of them tweeting selfies with their calendars and tagging their favorite calendar models. One poetry enthusiast recently brought hers to be autographed at a comedy show with comedian Hari Kondabolu, the calendar's Mr. October.

Last year, on the heels of the "Haikus with Hotties" success, Audrey announced that after 12 years as an independent publication, the magazine had been acquired by investors (along with sister publication KoreAm Journal) and would no longer be producing print issues. Tseng, along with the rest of the editorial staff, was laid off.

Because the magazine's future is unclear — it may continue in a Web-only format — the 2016 Haikus with Hotties calendar may become a one-time-only collector's item after this year. "I would love for there to be a 2017 calendar, but there are no plans right now," Tseng says. "But if anyone wants to sponsor it ... "

Jean Ho is a writer in Los Angeles. She is currently a doctoral candidate in USC's Creative Writing and Literature Ph.D. program.