Accessibility links
Shaken By Shooting, North Carolina Muslims Emerge 'Proud' One Year Later : Code Switch A year after a gunman killed three young Muslim-Americans in Chapel Hill, many in the local Muslim community have responded by being more vocal and visible around issues of faith. 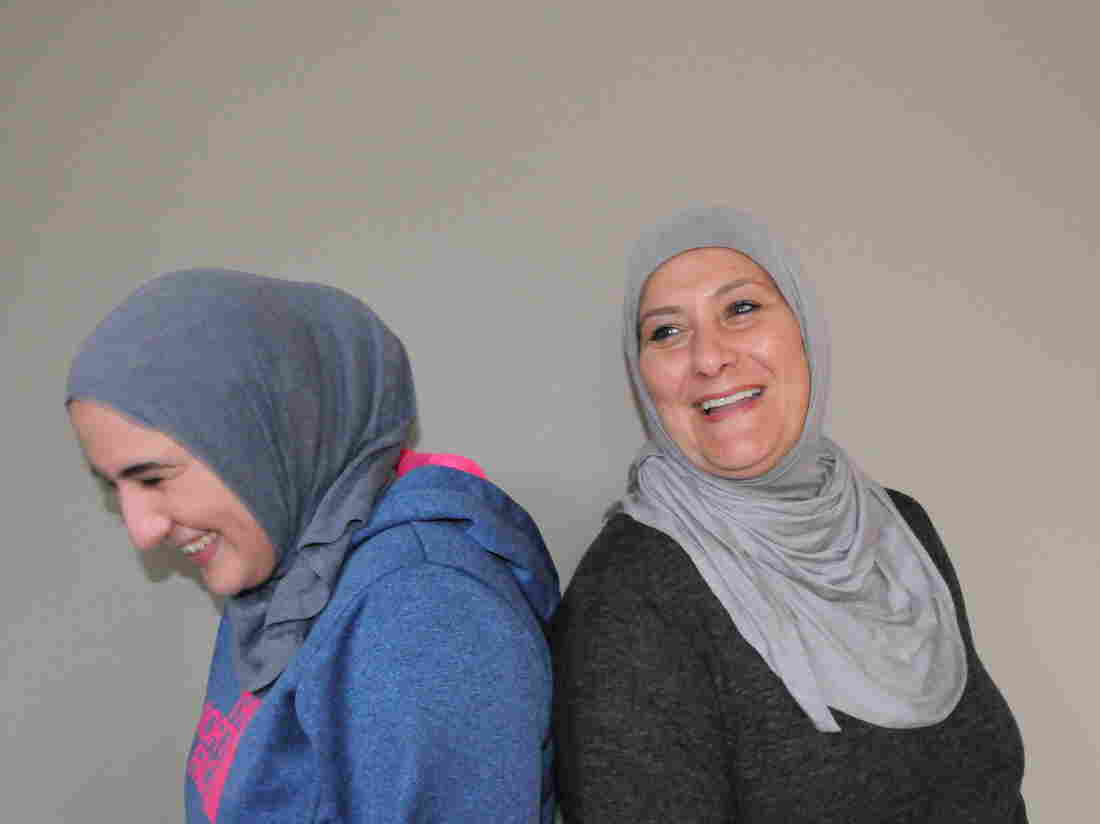 As members of the local Muslim community, Summer Hamad and her daughter Marjan Hamad were personally affected by the murder of three young Muslim-Americans in Chapel Hill, N.C., on Feb. 10, 2015. After the shootings, they both decided to begin wearing the hijab. Reema Khrais hide caption 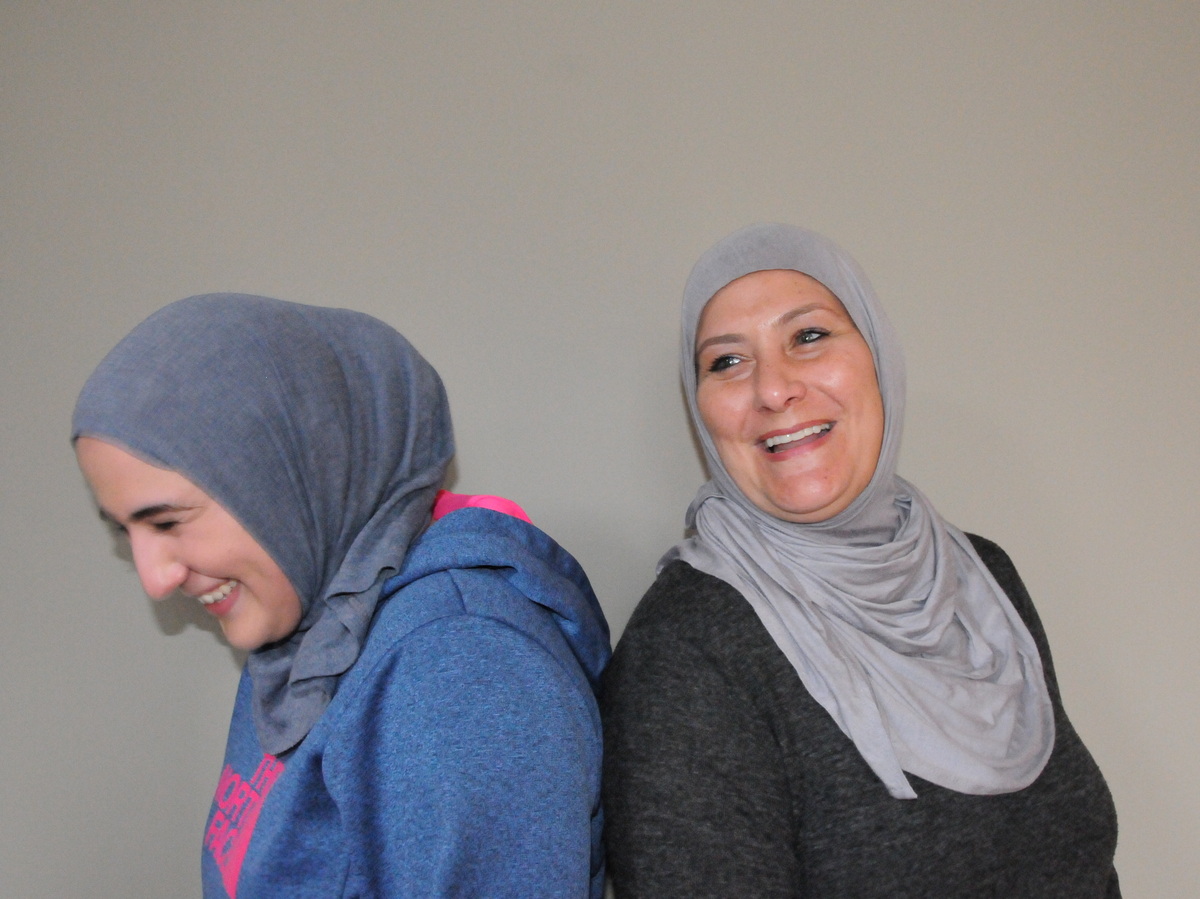 As members of the local Muslim community, Summer Hamad and her daughter Marjan Hamad were personally affected by the murder of three young Muslim-Americans in Chapel Hill, N.C., on Feb. 10, 2015. After the shootings, they both decided to begin wearing the hijab.

On Feb. 10, 2015, Summer Hamad remembers sitting in her family room in Raleigh, N.C. It was late, a kind of humdrum night when the phone rang. It was her oldest daughter.

Hamad's face turned white. She had just seen Deah Barakat, a 23-year-old with an electric smile and calming presence, at a community fundraiser not too long before. She remembers pointing at him, jokingly telling her 19-year-old daughter, Marjan, that he's cute. "He's taken, Mom," she responded.

Barakat had just gotten hitched to Yusor Abu-Salha, a woman he had known since elementary school, in a glowing ceremony. That night, they were celebrating news of Yusor's acceptance into UNC-Chapel Hill's dental school, where Barakat was a student. Yusor's younger sister, Razan Abu-Salha, who was a student of design and art at N.C. State University, was joining them for dinner.

That's when their neighbor, Craig Hicks, knocked on the door and shot all three of them multiple times.

Chapel Hill police initially said the shootings were triggered by a parking dispute, but for many people around the world and in the community, it felt and looked like a hate crime. Hicks, who openly bashed religion on social media, confessed shortly after the act and is facing the death penalty. 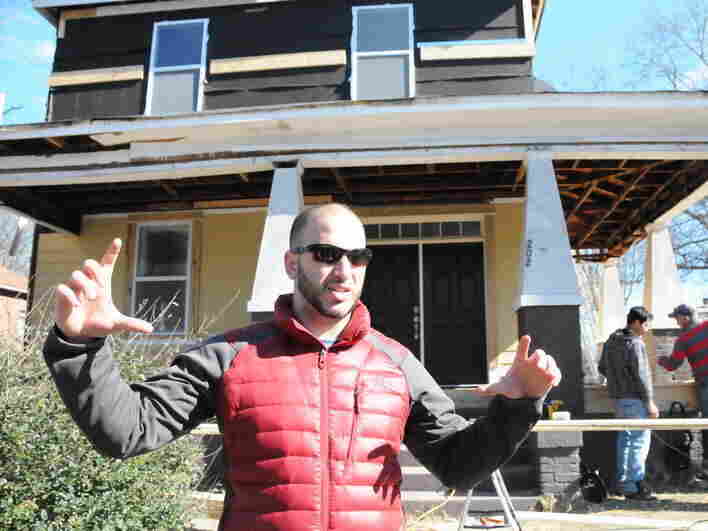 Farris Barakat is the brother of Deah Barakat, one of the Chapel Hill shooting victims. He and others have been converting a house his late brother owned into a community center. Reema Khrais hide caption 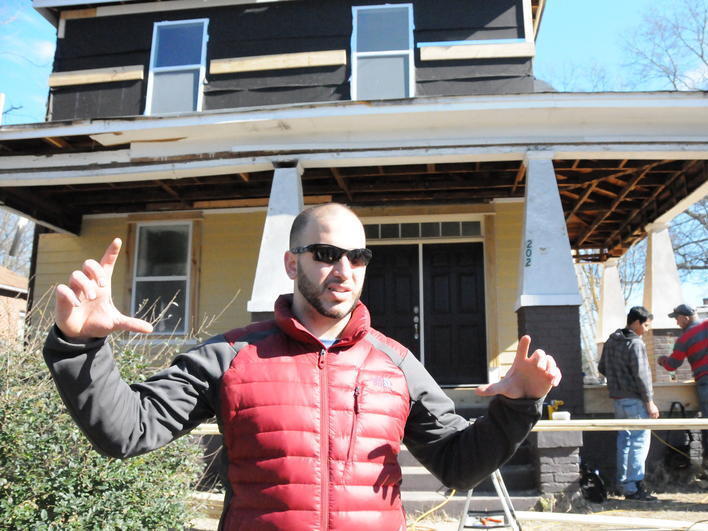 Farris Barakat is the brother of Deah Barakat, one of the Chapel Hill shooting victims. He and others have been converting a house his late brother owned into a community center.

Choosing To Be Visible And Vocal

As Summer and Marjan Hamad grieved publicly with the local Muslim-American community, they began a different conversation in their home about how to respond. It was about wearing the hijab. For years, they had flirted with the idea, but they never felt ready. After the shooting, Marjan remembers thinking "What am I waiting for?" Her mom agreed, so they decided they'd do it together. Coincidentally, they circled the same start date on their calendars.

"For me, as a mom, I wanted to show you that it's OK to be Muslim," Summer says. "This happened, but it can't stop us from being who we are, from practicing our faith ... because it's beautiful, it's peaceful."

As someone who could pass as white and non-Muslim without the hijab, Summer says it was important to her to be noticeably Muslim around her community. "If I was doing something good like volunteering, which we do a lot, I wanted people to know that we're also Muslim."

'The Timing Will Never Be Right'

When Summer Hamad and Marjan Hamad chose to wear the hijab together, they felt assured and proud with their decision, despite some hesitation from their family on whether the timing was right. "By the way the media is going, the timing will never be right," Summer explained to them.

Summer wasn't necessarily fearful for her own safety, but admits she had some hesitations for her daughter. She'd say to Marjan: "Always travel with a friend, don't walk late at night by yourself."

"And I would hear myself say that and think 'I don't want to instill that fear in you if you don't have it,'" Summer tells her daughter. Marjan responds that she's not scared, but has become more aware of her personal surroundings since wearing the hijab. Her mom says she hates that her daughter has to live in a world like that. "Even without the hijab sometimes that can happen," she tells her daughter. "It's mostly uneducated people who don't know who we are."

In the year since the shootings, many local Muslims — like the Hamads — have chosen to be more visible in their communities. They've become more proactive about sharing their faith, engaging with their communities and trying to create a collective embrace. For some, that has taken the form of wearing the hijab, making art or publicly writing about their relationship with Islam. In remembrance of the three victims, family and community members have also been building a community center that — among other goals — aims to help educate people about Islam.

Using Art As A Channel

Mohammad Moussa, who knew Barakat from college, began writing shortly after his friend's funeral. It led to a long-form spoken word performance called "Shattered Glass" that honors the three victims, who were loved for their spirit of service and community building. "It's very important for me as an American Muslim to promote and project the true image of Islam," he says, "and what more of a powerful example can you give than through these lives that were taken tragically?"

Moussa says storytelling is especially important for minority communities. He explains that no one will ever understand a community's histories, struggles or principles if they don't share their own stories. "Or even worse, someone will tell your story on your behalf, someone will define you, someone will misunderstand you and spread that misunderstanding."

That idea is one of the reasons why Shereen Elgamal and her 18-year-old daughter Amena Saad from Cary, N.C., started a blog together to reflect on their faith and share it with others.

"Everybody's talking about Muslims, except Muslims," Elgamal says. She and her daughter began the blog late last year after the Chapel Hill shootings. They've also shared their reactions on what they see as the country's growing anti-Muslim sentiment and rhetoric which has only intensified this last year, especially in the heat of the presidential race.

"I've never liked the way Muslims are represented in the media and it's always been something I wish I could change," Saad explains. "And I think the only we can change is to show people that we are not different and that we have a lot in common."

Reema Khrais is a reporter for member station WUNC in Chapel Hill, N.C.