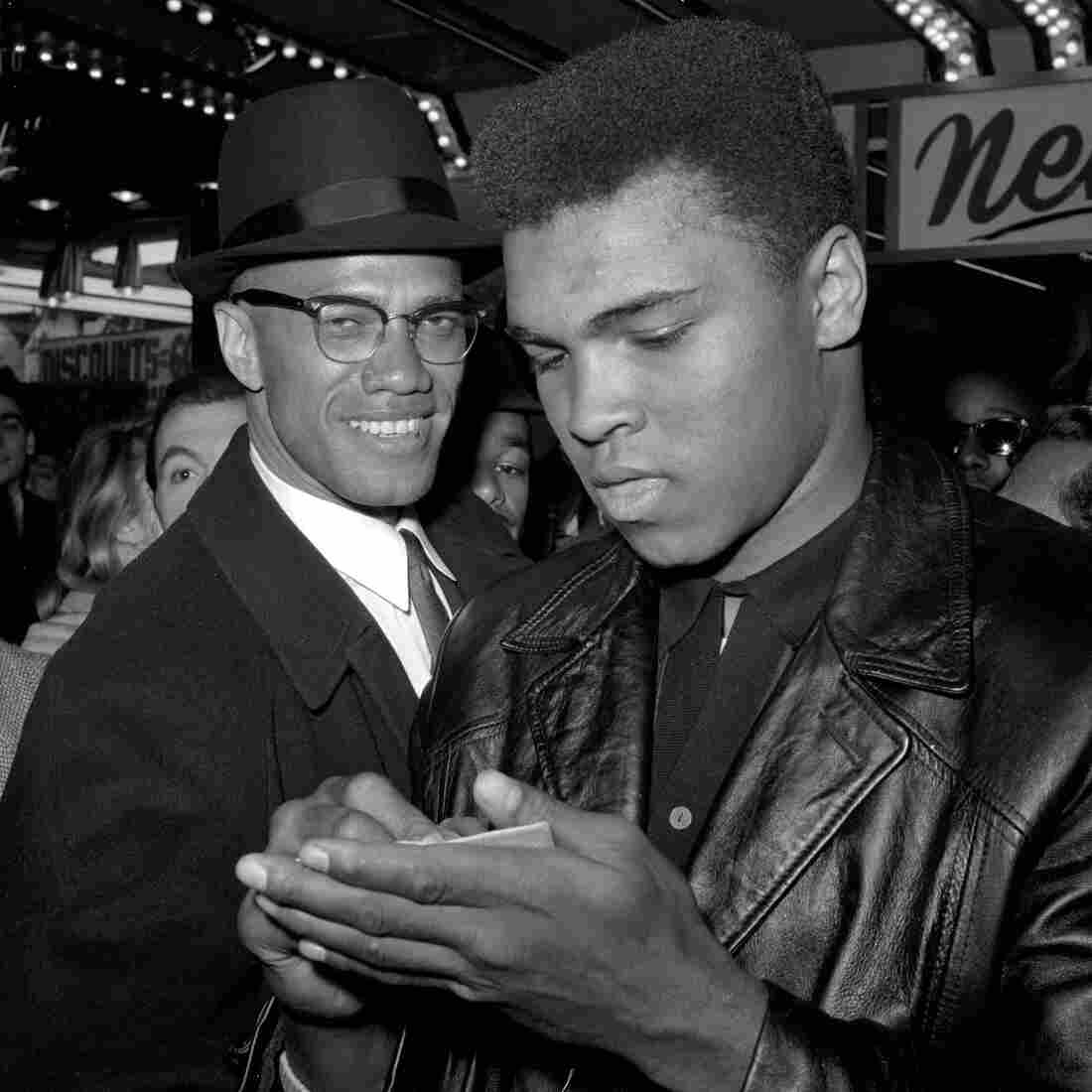 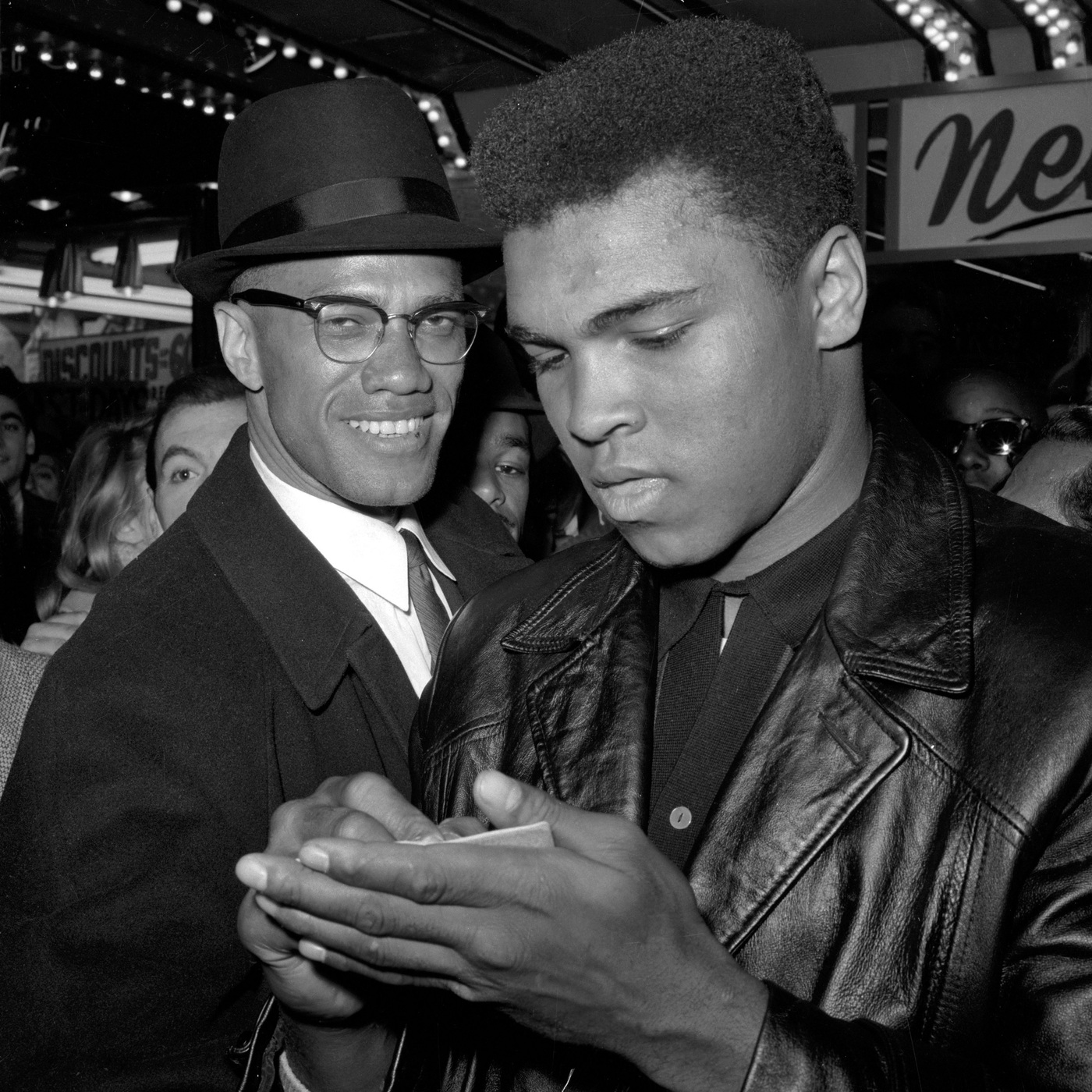 The night Cassius Clay beat Sonny Liston, the reigning heavyweight champion, crowds had squeezed into the venue, expecting to watch Liston beat the stuffing out of the young braggart. The odds were 7-to-1 in Liston's favor. The air was filled with testosterone and cigar smoke. Few people noticed the tall, quiet man at ringside, immaculately dressed in a dark suit and tie and crisp white shirt, watching the fight intently.

The stranger was Ali's friend and mentor Malcolm X, and he was seen to have smiled broadly when Clay was declared the fight's winner by a TKO in the seventh. Malcolm believed a victory was preordained, that Allah would guide young Cassius in the ring. The next morning, at the traditional day-after press conference, a subdued Cassius Clay told reporters that henceforth he would be known as Cassius X. A month later, he would take the name that would become world-famous: Muhammad Ali.

A Meeting Of Minds Sparks A Friendship

A new book, Blood Brothers: The Fatal Friendship Between Muhammad Ali and Malcolm X, chronicles the friendship between these two extraordinary men. Co-author Johnny Smith, a historian at Georgia Tech, says the two met back in 1962. That's when Sam Saxon, a friend from training camp, drove Cassius Marcellus Clay and his younger brother, Rudolph Valentino Clay, to a Saviour's Day rally in Chicago, an annual event hosted by the Nation of Islam. Saxton was a Black Muslim (as the Nation's members were often called) and knew Clay had been looking for a spiritual landing place. Malcolm was the opening speaker at the rally; his incendiary rhetoric and adept sparring with the press had made him the public face of the Nation of Islam, and the Clay brothers were mesmerized.

"There was this confidence, this authority that Malcolm had at the podium that day," Smith says, "and it made a profound impression on young Cassius Clay." 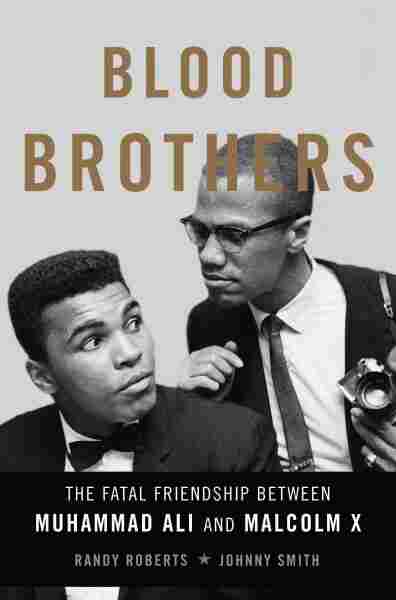 The Fatal Friendship Between Muhammad Ali and Malcolm X

by Randy Roberts and Johnny Smith

Malcolm saw in Clay a charisma that drew people to him. He began to cultivate the friendship, partly because Malcolm hoped he could draw Clay into the Nation; the young boxer could potentially bring admirers into the fold with him, a benefit for the Nation — and for Malcolm.

The two began to spend time together whenever possible. Malcolm was part father figure, part big brother to Clay. His faith was also a draw, because Clay had rejected the faith he'd grown up with as empty. He was looking for a spiritual home, and perhaps the Nation could be that place.

He did not, however let the outside world know it. Purdue University historian and Blood Brothers co-author Randy Roberts said much of America — "especially white America" — was terrified by the Nation of Islam. If a rising sportsman aligned himself with them, Roberts believes, that would have been fatal to his future. The boxing establishment — sportswriters, promoters, backers — wouldn't tolerate that. "If he's a member of this organization, you can write him off," Roberts says, "he will never get a shot at the championship."

So Clay kept his faith to himself, until he beat Sonny Liston. While shock waves from that victory were still reverberating, he made the announcement that he was indeed a member of the Nation. The black establishment wasn't any more thrilled than the white one had been, says Johnny Smith.

"Here you have the most famous mainstream civil rights leaders, heroes — King, [Jackie] Robinson, Floyd Patterson — who were criticizing Clay for joining the Nation of Islam." Robinson, who had retired from Major League Baseball by then, even went public with his dislike. "He quarreled with Malcolm in the press, criticized him," Smith says. "He believed that Malcolm's approach set back the civil rights movement." The Nation, with its stridently anti-white ideology, was the exact opposite of the peaceful integration mainstream civil rights leaders had been working for.

Interestingly, by the time of the Clay-Liston fight, Malcolm's influence was waning as Ali's began to rise. Malcolm had been declared persona non grata by the Nation for what they saw as self-aggrandizement. He was also criticized for revealing that the Nation's revered founder, who was addressed as the Honorable Elijah Muhammad, had fathered several out-of-wedlock children with his secretaries. Furious at being questioned by an underling, Elijah Muhammad suspended Malcolm and forbade him to speak publicly. Malcolm left the Nation soon after the rupture. He thought Ali would go with him.

One of Ali's greatest regrets — and he said as much — is that he never patched things up with Malcolm, that he never told Malcolm how important he was to him.

Ali, by then inextricably associated with the Nation, turned his back on his old friend. The boxer was still a believer in Elijah Muhammad and the religion he'd founded, and was deeply offended by what he saw as Malcolm's disloyalty. Johnny Smith says the two saw each other only once more: Both men were in Africa, in Ghana, when they met in the plaza outside the Ambassador Hotel in the capital city, Accra.

And what happens, recounts Smith, is this: "Ali and Malcolm, their eyes meet. And at that moment, Malcolm says, 'Brother Muhammad! Brother Muhammad!' He wants to engage with him, say hello. He doesn't know Ali is mad at him, that they're no longer friends. He's got this half-smile on his face. And Muhammad Ali, just stone-faced, says, 'Brother Malcolm, you shouldn't have crossed the Honorable Elijah Muhammad.' And he essentially walks away from him."

Ali was accompanied by Elijah Muhammad's son, and he could hardly have been seen to embrace the man whom the Nation had declared its mortal enemy.

A marked man, Malcolm was assassinated early the next year.

Legacy Of A Friendship

Randy Roberts says, "One of Ali's greatest regrets — and he said as much — is that he never patched things up with Malcolm, that he never told Malcolm how important he was to him." Interestingly, Ali would also eventually leave the Nation of Islam to convert to Sunni Islam, the same orthodox Muslim faith his former mentor had embraced after leaving the Nation.

Malcolm is dead. Ali's voice has been quieted by Parkinson's disease, but the legacy of their friendship is still very much with us, say the co-authors of Blood Brothers.

Roberts points to the fusion of politics and sports. "Once, we viewed sports as a world apart, untouched by the political and economic and racial problems of the day," Roberts says. "Well, since Muhammad Ali, we can never maintain that fiction."

And because of his association with Malcolm X, a brilliant young boxer became an ambassador to the world and an icon in and beyond black America.