Accessibility links
Archive Spotlights The "Golden Age" Of Black Radio : Code Switch Indiana University added an exhibit to the online platform that features audio and photos from the early days of radio — from when black-oriented stations started popping up in the 1940s and beyond.

Indiana University added an exhibit to the online platform that features audio and photos from the early days of radio — from when black-oriented stations started popping up in the 1940s and beyond. 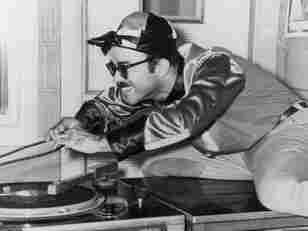 Five years ago, Google began to digitally preserve cultural material online, making collections available to virtually anyone. Users can explore paintings and photos and artifacts from around the world with just a few clicks. This month, the Google Cultural Institute added a new collection dedicated to black history and culture. It includes an exhibit that caught our attention, "The Golden Age of Black Radio." From NPR's Code Switch team, Priska Neely of member station KPCC took a tour.

PRISKA NEELY, BYLINE: The Black History and Culture Collection is jampacked. It features 80 digital exhibits, curated by institutions all over the country. Google spokesperson Patrick Lenihan says it's been in the works for two years.

PARTICK LENIHAN: The idea was that there are all sorts of histories and cultures that just aren't celebrated quite as often as the Monets and the Picassos of the world.

NEELY: One special chapter of that under-celebrated history is not about images but about sound.

BRENDA NELSON-STRAUSS: Right away we thought that our black radio collections would make the most sense.

NEELY: That's Brenda Nelson-Strauss. She's head of collections at Indiana University's Archives of African-American Music and Culture. They house extensive audio recordings and photos, which they poured into their exhibit, "The Golden Age of Black Radio."

NELSON-STRAUSS: One of the things that a lot of people don't realize is how important these early black radio stations were in spreading black music around the country.

(SOUNDBITE OF SONG, "I'M GONNA SIT RIGHT DOWN AND CRY")

ROY HAMILTON: (Singing) I'm gonna sit right down and cry over you.

NEELY: When black stations first started popping up in the 1940s, disc jockey's like Jack Gibson could make unknown musicians stars in moments.

JACK GIBSON: That's my boy, Roy Hamilton, who'll be in our part of the country real soon. In fact, sometime at the end of next month. Roy Hamilton's "I'm Gonna Sit Right Down And Cry."

NEELY: Gibson was better known as Jockey Jack or Jack the Rapper for his smooth talk. In the '50s and '60s, DJs like him had a big influence.

GIBSON: We didn't have movie stars that we could look up to or sports heroes. You got to remember, there were no basketball and football and all that kind of stuff. Blacks were hungry for heroes, so the black radio made instant heroes out of all black disc jockeys all over the country.

NEELY: Gibson died in 2000, but interviews with him recorded during the '80s and '90s guide users through the exhibit. Gibson helped start the first black-owned radio station, Atlanta's WERD in 1948. During the Civil Rights Movement, the Southern Christian Leadership Conference used to have an office right below. And if the SCLC had a message to get on the air, they'd tap the ceiling with a broom handle.

NEELY: Much of the material in this exhibit and the Indiana University archives comes from an award-winning series from Radio Smithsonian.

UNIDENTIFIED MAN: Black Radio, telling it like it was, a history of radio and the African-American culture.

NEELY: It was produced in 1995 by a woman who went on to become a well-known radio voice in Washington, D.C.

NEELY: She says she's thrilled to see this material take on new life decades after she and other producers collected it.

WEBB: We were out in the field with our little recorders actually talking to these people and getting their own personal history. So to see that their history is being preserved and shared just means an awful lot.

NEELY: Webb says the early African-American DJs paved the way for all black entertainers, and even as radio overall loses its influence, the history of black radio is still relevant in the morphing media landscape.

WEBB: The thing that remains the same is good storytelling and that's what these people did. They told the story of their lives, of our lives, of our music; that'll never die.

NEELY: These stories of the golden age of black radio will live on online long after Black History Month is over. For NPR News, I'm Priska Neely.

GIBSON: Well, fabulous ones, from somewhere along the way, this is me, your pres, Jockey Jack.