Accessibility links
For Better Or Worse, Chris Rock Made The Oscars As Black As He Possibly Could : Code Switch Despite the fact that no black actors were nominated in any high-profile categories, Academy Awards host Chris Rock kept race at the center of the event. 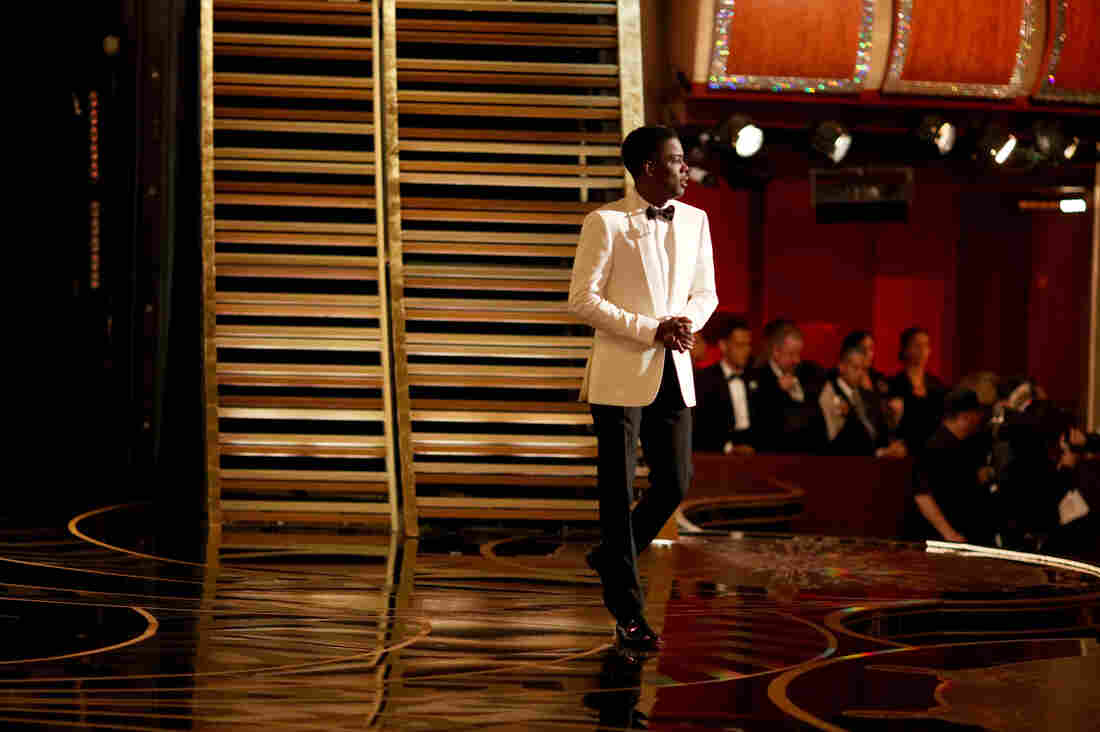 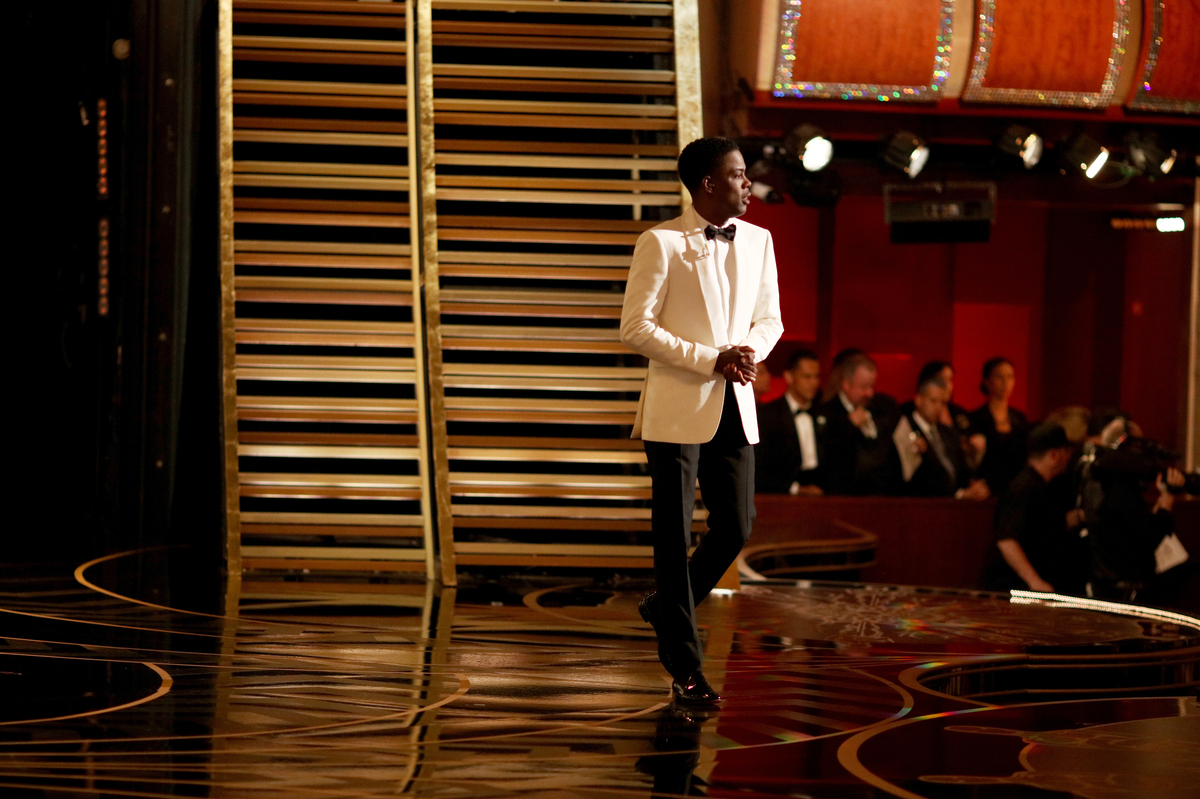 Comedian Chris Rock hosting the Oscars on Sunday. Rock's razor-sharp monologue skewered sensibilities on all sides of the #OscarsSoWhite debate.

Host Chris Rock made sure Sunday's Oscars were about as black as they could be, given that no black people had been nominated in any high-profile categories.

Of course, Rock brought the pain, as he always does, in a razor-sharp monologue skewering sensibilities on all sides of the #OscarsSoWhite debate. And his comedy bits throughout the show kept up a steady drumbeat, reminding audiences in the hall and at home just who had been left behind.

That meant two Suge Knight jokes, featuring the actor who played him in Straight Outta Compton. And a bit where Rock's daughters joined a cadre of black Girl Scouts running into the audience to sell $65,000 worth of cookies. There was a man-on-the-street segment featuring mostly black filmgoers at a theater in Compton, Calif., who hadn't heard of most of the white-centered movies considered major contenders. And Rock gave a shout out to #BlackLivesMatter at the show's end, jokingly inviting the Oscars audience to the BET Awards as Public Enemy's Fight the Power played over the closing credits.

It was overall a virtuoso performance, a constant statement balancing the tony, liberal-tinged self-congratulation of a typical Oscars ceremony with the different world people of color — even those who go to see films regularly — inhabit beyond the bubble of Hollywood's film elite.

But by emphasizing black exclusion so heavily, Rock's comedy also overlooked the way other ethnic and racial minorities were excluded from Oscar nominations and significant roles in high-quality films.

A recent study shows that nonwhite Hispanics are by far the most underrepresented characters of color in film and television, while women and gay people also face significant marginalization. Still, most of the comedy about exclusion Sunday reduced the idea of diversity to a black-and-white issue — something that felt, ironically, a little exclusionary itself.

1st reference 2any ethnicity other than "Black" @the #Oscars; 30 minutes in someone mentions "pho." I thought #diversity was more than that.

On social media, former Lost star Daniel Dae Kim wryly noted that Rock's pre-taped interviews at the Compton theater didn't mention the underrepresentation of Asians and Latinos until nearly two minutes in. "At 1:57 a 'man on the street' finally mentions Asians & Hispanics. Grateful someone sees #diversity as more than just black & white," he wrote.

Meanwhile, an opening montage of images from films of note this Oscar season featured black actors like Samuel L. Jackson, John Boyega, Idris Elba, Will Smith and Michael B. Jordan so prominently, it looked like a cavalcade of nonwhite people who should have been nominated. ("I counted at least 15 black people in that montage," Rock joked when he first walked onstage.)

In one pre-taped video, Angela Bassett hosted an Oscars Black History Month Minute that sounded like a tribute to Will Smith — a "groundbreaking" producer, actor, comedian and musician — until she revealed the real subject: Jack Black. In another, Saturday Night Live's Leslie Jones and comic Tracy Morgan were inserted into clips from The Revenant and The Danish Girl as a way of giving black actors parts in big movies.

Rock earned waves of applause from the Oscars audience by joking that black people didn't protest exclusion from the Oscars in the 1960s "because we had real things to protest ... too busy being raped and lynched to care about who won best cinematographer." (Of course, as Code Switch's Gene Demby noted recently, black people did protest exclusion in Hollywood at the 1962 Oscars, led by a black actor, Caleb Peterson.)

Moments later, crowd reaction was more muted when Rock said, "Is Hollywood racist? You're damn right Hollywood's racist ... but it's [racism] you've grown accustomed to. Hollywood is sorority racist. It's like, 'We like you, Rhonda. But you're not a Kappa.' That's how Hollywood is."

It was a delicate balancing act — edgy enough to make an impression throughout the show, but sly enough not to seem too overbearing. 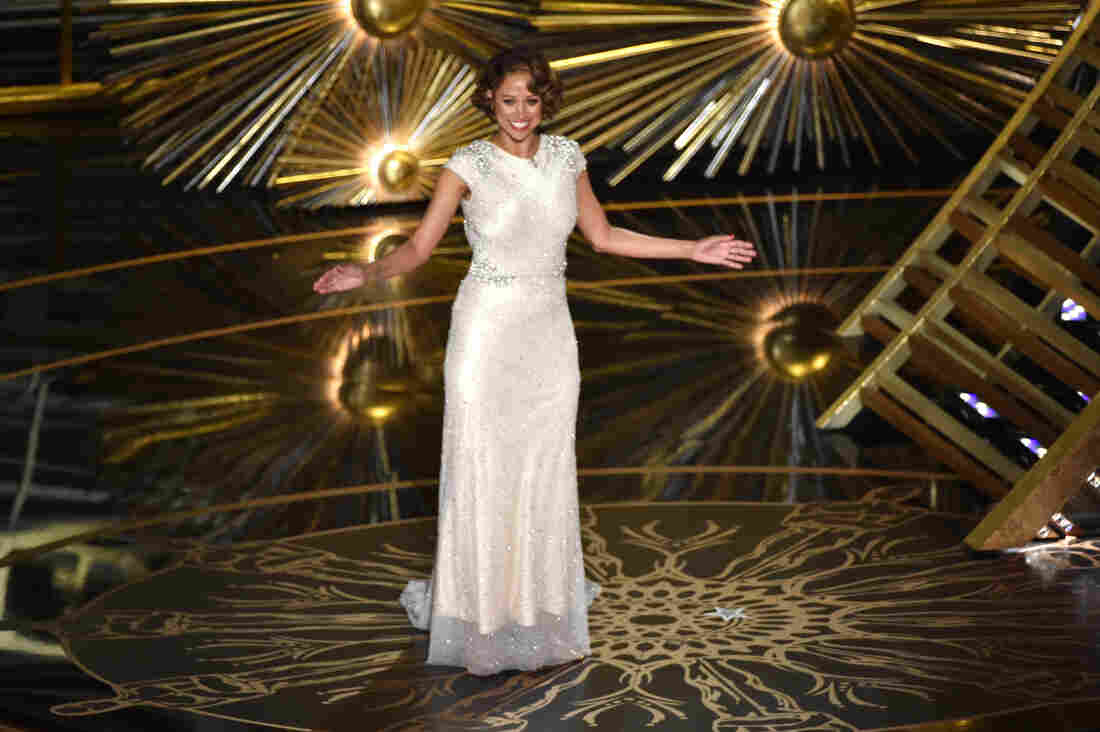 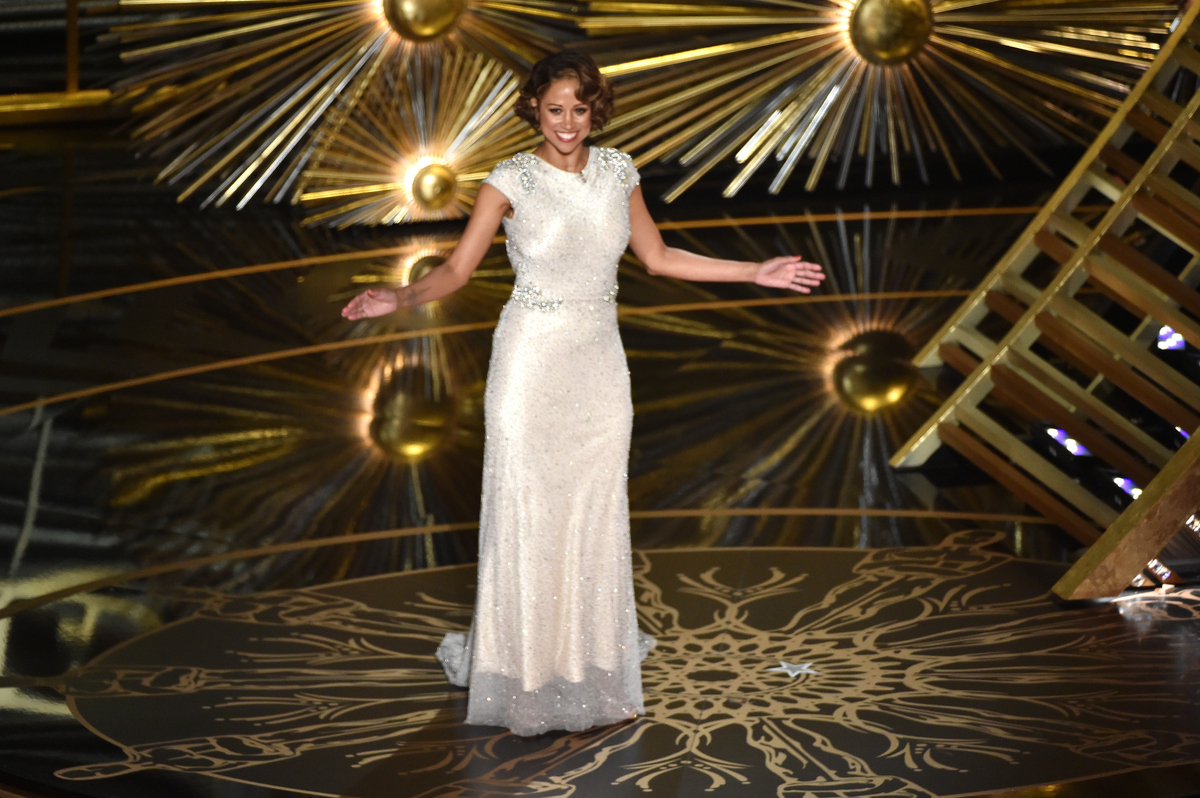 Actress Stacey Dash walks on stage during the Oscars.

There was also what might have been the show's most awkward moment: an appearance from African-American actress-turned-conservative pundit Stacey Dash, who once opined on Fox News about the unfairness of Black History Month and Black Entertainment Television to white people. She was satirically announced as the director of the Oscar academy's new minority outreach program, walking onstage to wave at the crowd in a bit many people in the audience and on social media didn't seem to understand.

Outside of Rock's comedy, the Oscars tried hard to look as inclusive as possible. Presenters represented a wide range of ethnic groups, from Sofia Vergara and Priyanka Chopra to Byung-hun Lee and Kevin Hart. Academy President Cheryl Boone Isaacs and musical director Harold Wheeler are African-American, and their appearance reinforced the sense that there was ethnic diversity everywhere outside of the actual awards.

But there were some serious problems. Sacha Baron Cohen offered a line about the animated yellow Minion characters from the Despicable Me franchise that recalled stereotypes about Asian sexual endowments, while Rock ushered three Asian children onstage saying they were the accountants handling Oscar votes, in an embarrassing nod to stereotypes about Asians being good at math.

Even one of the Oscars' biggest moments of inclusion, in which Mexican director Alejandro Gonzalez Inarritu made history by winning a best director Oscar for the second consecutive year (the first time that's happened in 65 years), came with a bit of an asterisk. 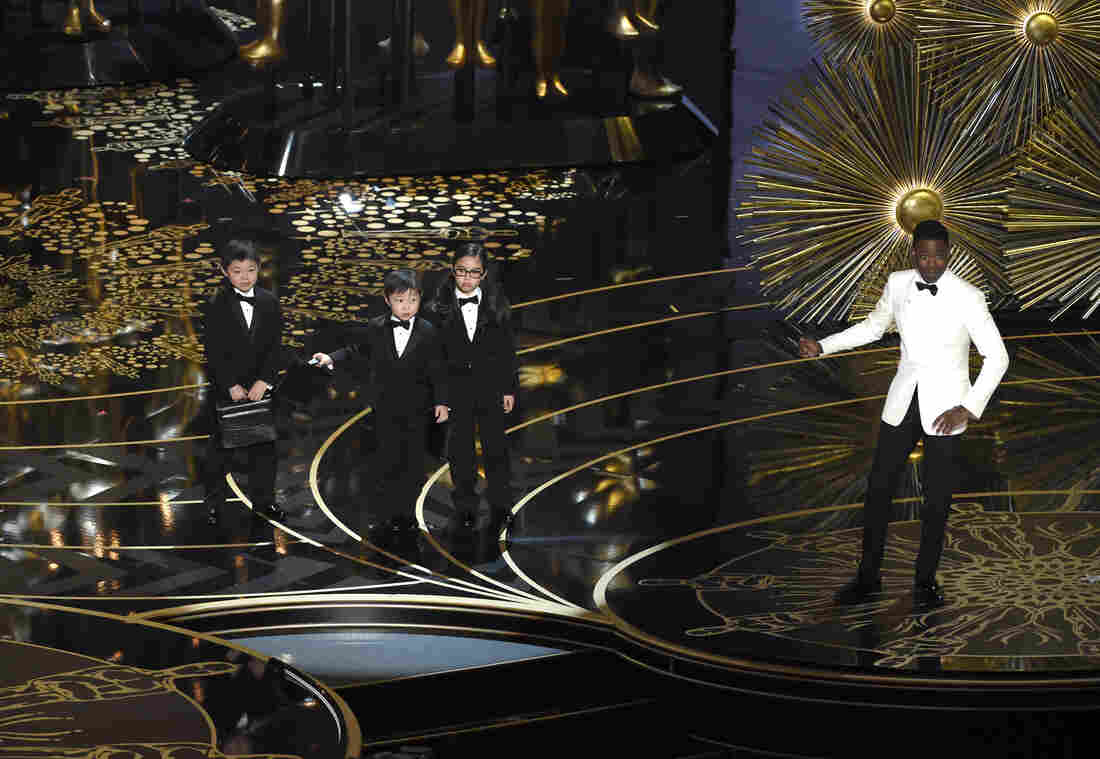 Host Chris Rock and children participate in a skit during the Oscars. Chris Pizzello/Invision/AP hide caption 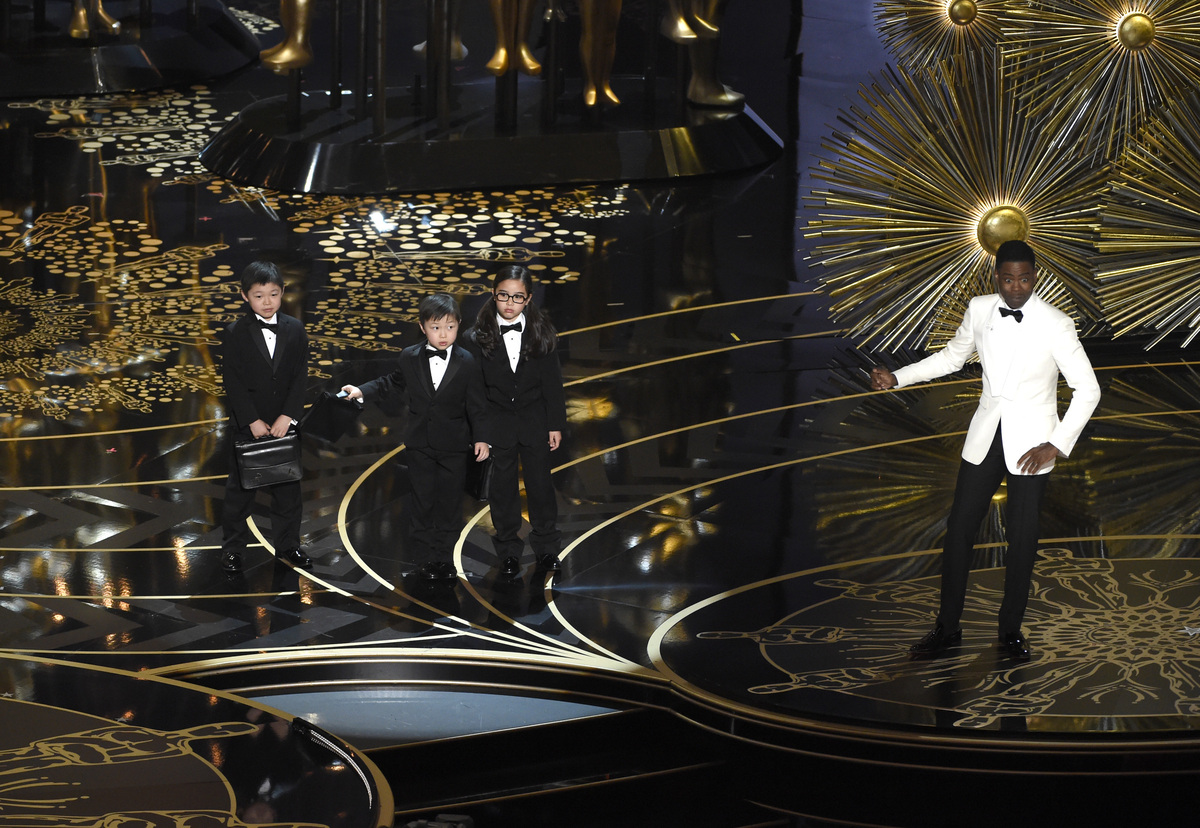 Host Chris Rock and children participate in a skit during the Oscars.

That's because the film that earned Inarritu this year's Oscar, The Revenant, featured Native American actors but no notable black or Hispanic roles. His Oscar last year came for Birdman, a movie with no notable roles for nonwhite actors. The most-honored Hispanic film director in recent years hasn't helped much with current Hispanic underrepresentation onscreen.

(Inarritu did note in his acceptance speech that he was "very lucky to be here tonight, but unfortunately many others haven't had the same luck," saying he hoped in the future skin color would be as unremarkable as the length of someone's hair.)

It might be tempting to look back on the night as a roast of Hollywood's film community, a parade of jibes about diversity that the industry will endure, only to return to business as usual when the dust clears. In a world where only white people have been nominated for acting Oscars two years running, that's certainly a possibility.

But if there is anything Hollywood hates almost as much as not making money, it's being humiliated in public. And Rock's Oscars comedy was a public spanking so prolonged, it's tough to imagine anyone in the business risking a similar replay next year.

With all its flaws, Rock's turn as Oscars host provided a visceral look at the talent, comedy, lives and culture left out of Academy Award-level films when they exclude people of color. Here's hoping that's enough to keep the Academy of Motion Picture Arts and Sciences from making the same mistakes regarding inclusion for a third year in a row.